A new acquisition. I collect Camillus-made Buck 300 series knives, and though I already have a CC-made 317, (the equivalent to this knife), I thought it would be nice to have both the Buck and Camillus versions to compare. They are identical in frame and length, only differing in tang stamp, master blade shape/grind, & handle material, (also, the #317 has a lanyard hole, the #26 does not). Of course I couldn't resist the "stag" handles, which though synthetic, just look cool. I wonder if Buck ever had them make a stag handled version of the 317? I'll have to ask the Buck gurus about that.

Naturally this is my current favorite knife, and it came with a very heavy duty and attractive sheath, (not stock I'm sure), to which I attached a piece of Big Sur surf jade, (meaning it was found by a free diver in the surf). I think they were originally sold under the "Sword" brand, and I have seen versions with that etched into the blades, but this one doesn't say that anywhere. I have also seen versions with carbon blades, and this one is SS, so obviously they made a few variants.

I haven't seen much written about this knife, but I did gather it was probably made in the 80's. I'm also not so sure of the "Big Jack" moniker either, having only seen it referred to that way in one post on AAPK. This particular knife is in excellent condition, and from what I can see is factory sharp, (and very sharp at that). The blades are tight in the bolsters, it snaps like a dragon, so whatever the history, I am enjoying owning it very much. Looks good, feels good, is uber sharp; doesn't get much better in my book.

So, John, any info you might have on this knife would be appreciated. In the meantime it will be in my EDC rotation, as it is just so cool. I'll include some side by side photos of the #26 & #317 for comparison. 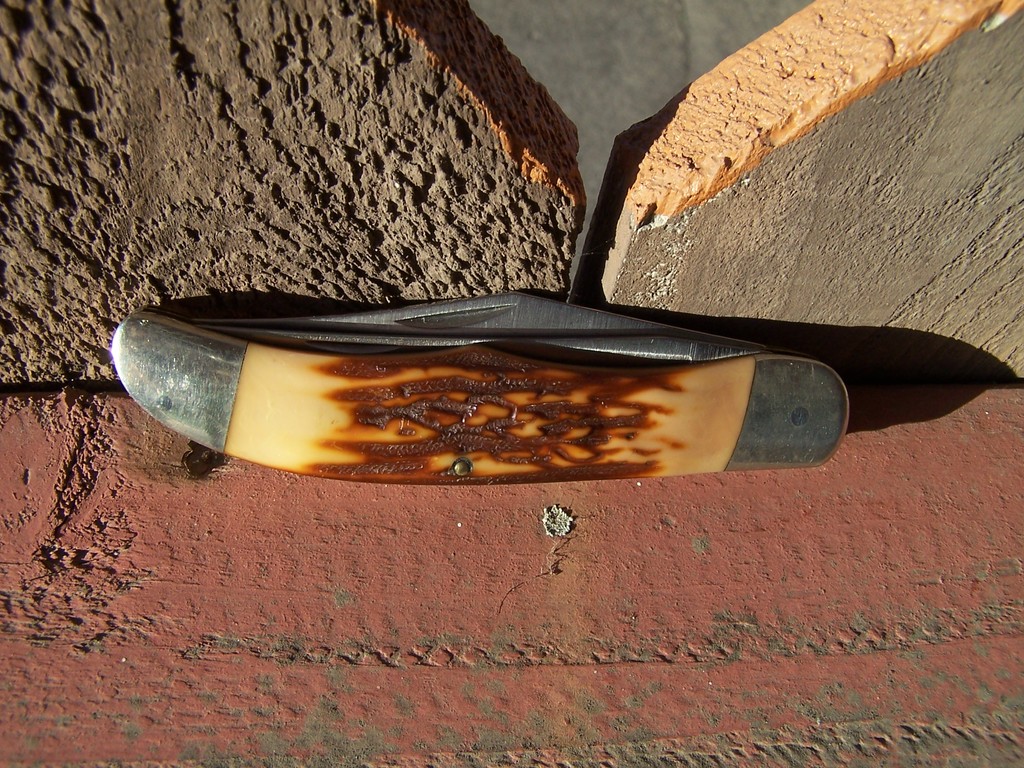 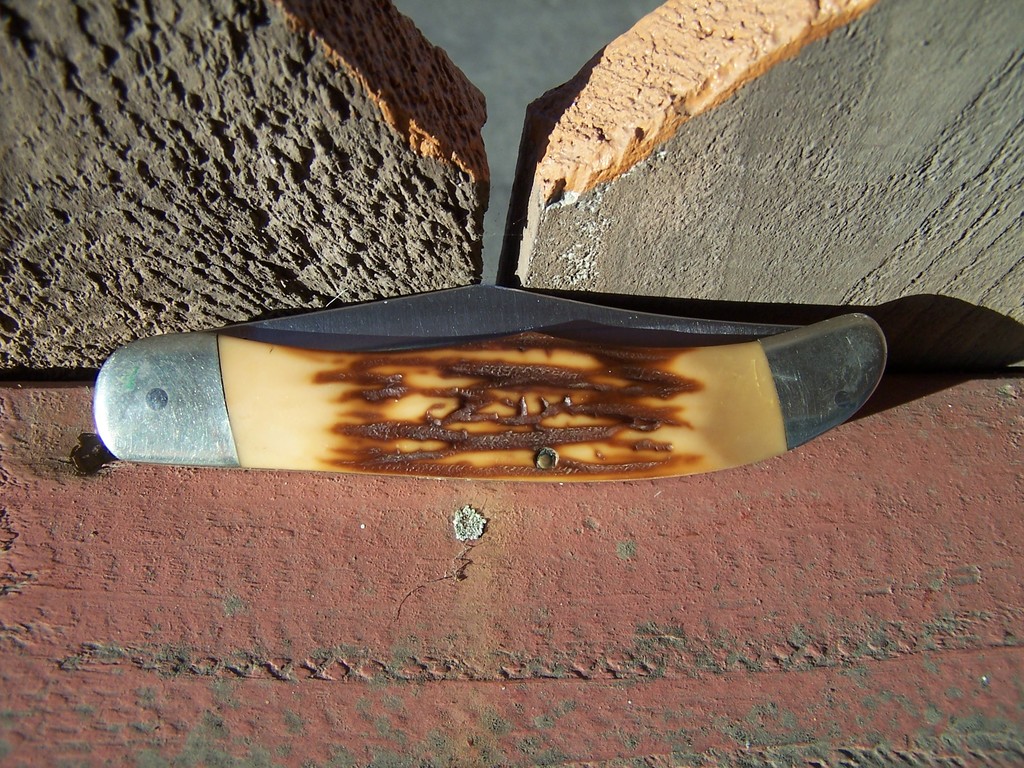 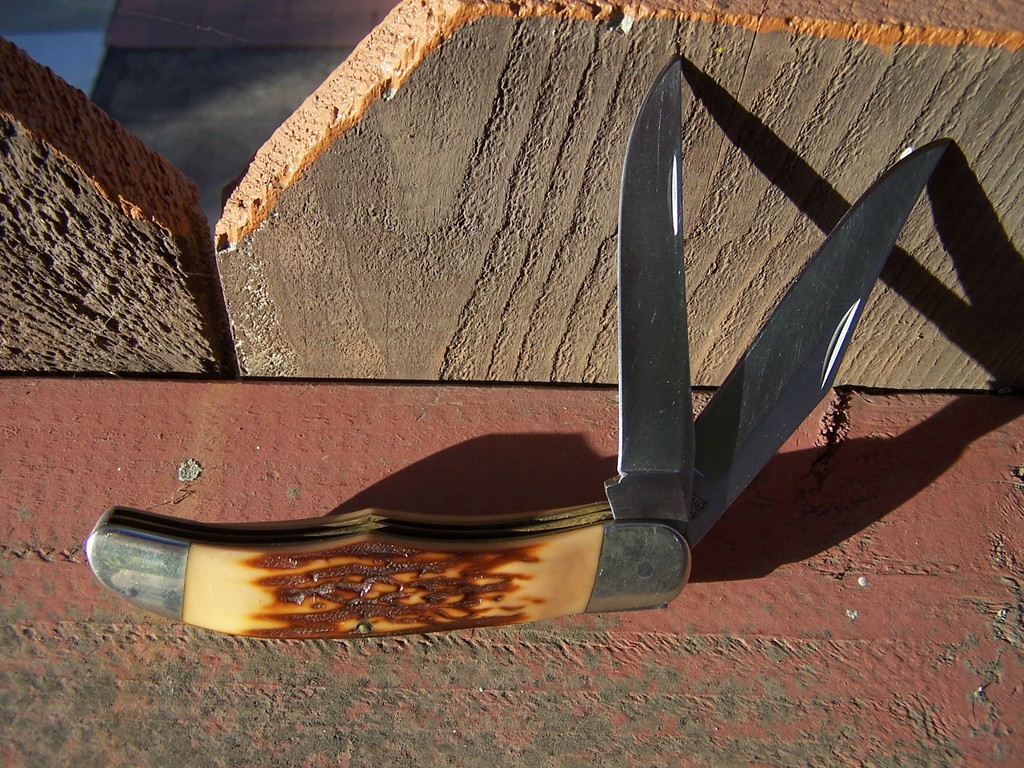 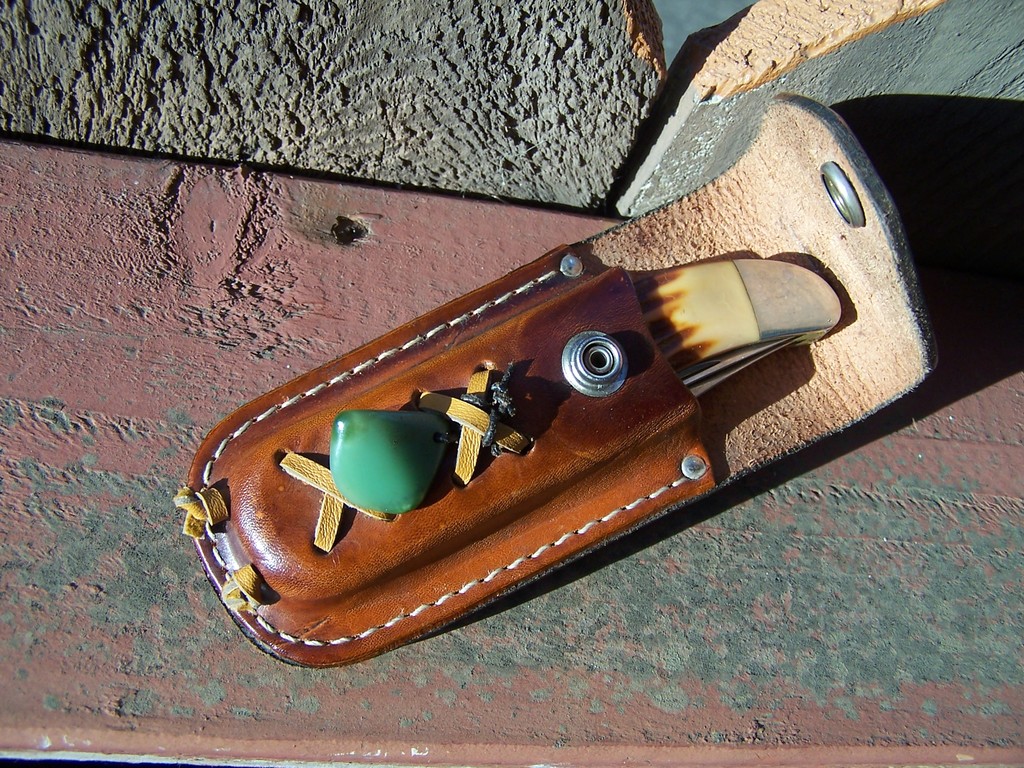 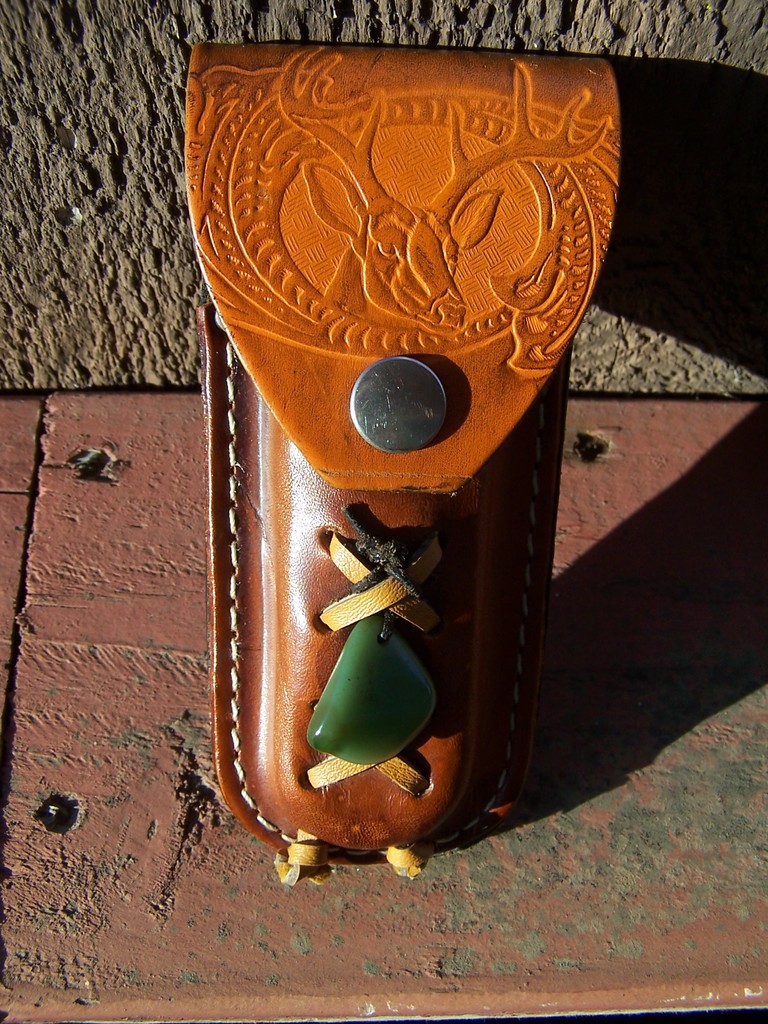 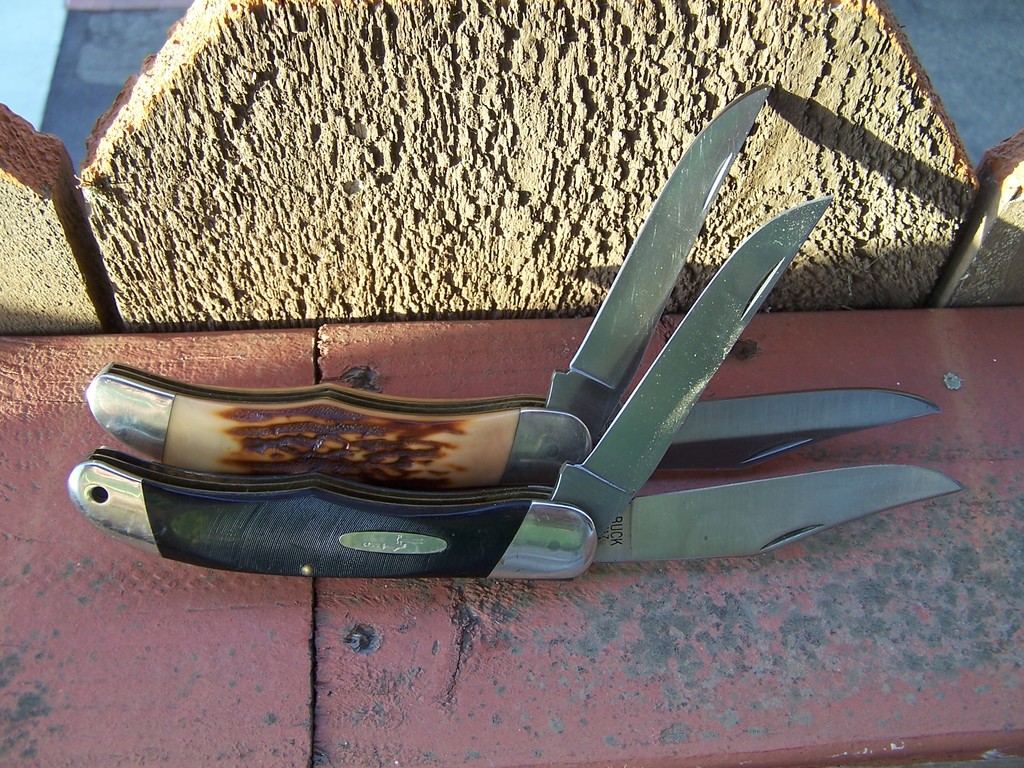 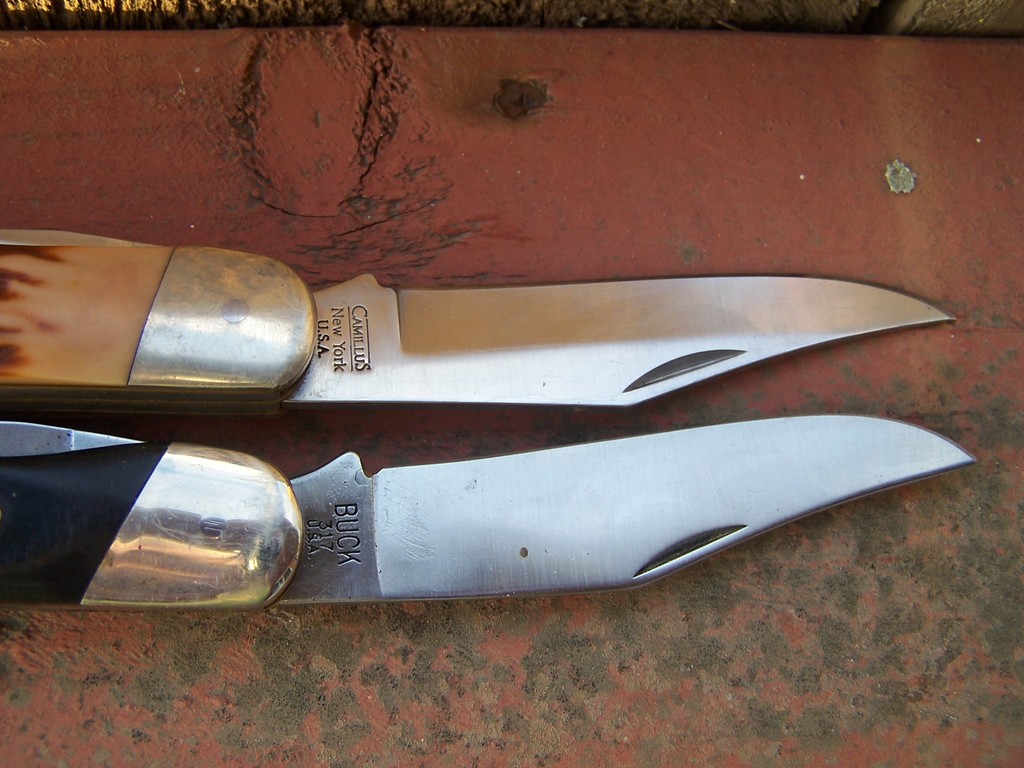 I like it a lot too. The master blade is thicker than the Buck's, and both blades are shave sharp. It is a very well made tool, and though it wasn't as popular or well known as it's Buck doppelganger, I just like how it feels and looks. As far as a lanyard hole goes, I carry both in a sheath, so other than for decoration that hole serves no real purpose for me anyway. Add to that the "Stagalon"-type handles, and the CC wins hands down IMHO. Don't get me wrong, I love my Wrangler, but this one has the "edge" on looks.

Just went to the Camillus Collectors website, and looked at every catalog listed there, (pricelists too), and this knife was first shown in the 1972 catalog as the "#26 Big Jack", there was no #26 anything prior to that. Retail was originally $13.50, but that was the most expensive folding knife CC offered at that time, so that would be a higher end knife today. For comparison, I think the Buck 110 sold for about $15 at that time, so the #26 was comparable in price. The Buck 317 showed up around that time too, (made by Camillus):  All of this model shown in the catalog had etched blades, so determining when mine was made, which has no etch, may be problematic. I also didn't see any listed with anything other than SS blades, though I have seen carbon bladed versions for sale on Ebay. I'll stick with my assertion of this one being from the 80's until I learn differently.

Syd- A little info- You are right, Camillus first issued and called the #26  the Big Jack in their 1972 catalog as far as I can tell. The original version with the Sword Brand etch was  real Indian stag and marked hand made- More accurately, that meant bench made, meaning a single master cutler assembled & finished the knife. I have a page from a 1928 catalog showing the Sword Brand way back then. Camillus carried the #26 for many years past 1972, not sure when or if they ever dropped it til their demise in 2007. However, the Camillus tang stamp with the line over Camillus was introduced in 1989-1990 and was used til they  went out of business in 2007.As I previously stated, the Sword Brand was their high end line, and yours with Delrin Indian stag and no blade etch  I think was their normal production line.These still bring $80-100 in the market today easily.- BTW, I also do not believe that is the original sheath, although very, very nice. Just for info purposes, here is a link to a great many Camillus catalogs-

Thanks John. That explains why some I've seen with "Sword Brand" etched on the blades are demanding such high prices. Even though just a "regular production model", this is a superbly made knife that I am glad to own.

I checked out those catalogs, very interesting reading. I especially found it interesting to see the changes in advertising styles from the 50's-60's into the 70's-80's. You can definitely see an evolution in both the types of knives being offered, and the way they were advertised. It was also amazing to see the wide variety of knives that CC offered over the years, I wish I had one of each of them.

Thanks for the info John, cheers.

Syd- No problem my friend- What are friends for, after all -LOL