Continued: Knives from Pakistan provided to me by Waqas Yousaf Farooq pt2

Ok, and now for the final installment of an inspeection of knives that were sent to me by Waqas. So here's what we have today. A damascus Neck Knife in Camel bone scales. First off a little bit on the steel. It's the same 1070 + 4340 carbon steel mix as in the other damascus knives. Were it me I'd upgrade the 4340 to a steel with more carbon in it. 4340 really can't be hardened. But in combination with the layers of 1070 it'll make a decent steel as long as the pattern is formed in the right way at the edge. You'll notice once again the lack of a makers mark. Which is a shame as far as I'm concerned because they really have nothing to be ashamed off. The workmanship is actually pretty good. The grinds are thin and well done. The edge is nice and even and well sharpened.

The grind is a high hollow one. It's very well done and even on both sides. The damascus shows a lot of contrast and there are no flaws or welding flaws in it.

The plunge is well done, better than on most factory 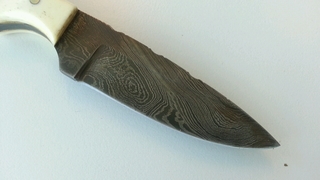 knives that I've handled. There is some filework on the back of the blade which is evenly done and not overly flowery so that it distracts from the blade itself.

So all in all it's simply a well made blade. You have to like damascus (the pattern is very bold) and it's not very stain resistant (it had some rust on it when it arrived) but it's well done overall.

The handle is done in Camel Bone scales with Brass liners. The liners are fileworked and show a nice bit of contrast with the black spine and the white camel bone.

The scales are a little contoured and have a gap for the lanyard hole near the end of the handle.

There are no obvious gaps between the scales and the tang. Everything seems to fit well and just the way it should.

The camel bone is well polished and smooth and the pins don't stand proud on the handle. There are no sharp edges around the pins or on the spine. 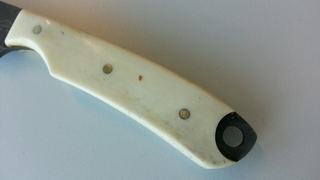 The area around the lanyard hols (near the butt of the knife) is a little sharp but nothing that would cut a person or cause real damage to the hand.

The tang has been completely etched so that the damascus pattern can both be seen on the spine and on the lanyard area.

There are no real complaints I could have about these scales or about the finish of the handles. They're well done. Personally I really like the fact that the WHOLE of the knife has the damascus etched. Too often makers

first put on scales and then grind them....before etching the damascus which means that the tang can't be etched for fear of damaging the handles. The man who puts handles on the knives for Waqas

obviously has his skills down. 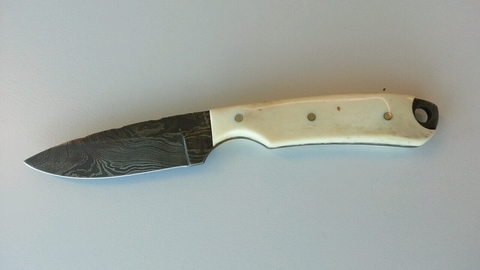 Now the sheath,,,,,is not really the best. Especially when compared to the other sheaths that have been sent my way so far,

The sheath on this knife was obviously made for it. It's an exact fit. However it's not a very snug fit. There's a lot of easy movement and if you tip the sheath upside down the knife will fall out without any resistance. There's a strap on the sheath which I suppose is there in order to prevent such things. However the strap can't be fixed to the sheath. On the sheath there's a button....but the counterpart of the button is missing on the strap. And even if it would be possible to fasten it to the sheath...the sheath would still be so loose that the knife would fall out. 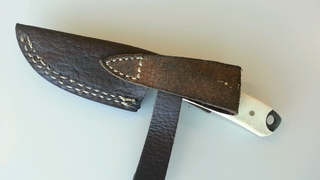 The knife was sent to me as a "Necker" but there is simply no way I could carry this as a Neck Knife. First of all there's no method of carrying it around the neck. Second of all even if there were a way....the sheath retains the knife so badly that it would have me scared constantly.

The knife is right for it. The sheath is NOT.

In all fairness however. Waqas did tell me that most of these things (knives and sheaths) are leftovers and such. So I suspect that the sheath would normally not pass muster. And if a sheath like on the bigger two knives would be supplied I'd be a lot more impressed. I think this sheath was added as an afterthought for safe shipping.

Other than the design of the sheath the workmanship is good. The leather is similar to that of the folding knife pouch. And the stitching is clean and even.

Out of all the knives I was sent to inspect. I like this one the most. It's design is most practical and the fit and finish (like on all of em) is very good.

The sheath....I like the least. It's simply not very functional. But having seen what they CAN do (on the bigger knives) I suspect that this one was simply a fluke. I'll just have to make my own sheath for this one.

And to be honest, I honestly don't think any of those things are dealbreakers. Waqas' people make very nice knives at VERY good prices. (Talk to him to find out)

He's very open and honest about how they produce their knives. And will gladly answer any questions you might have. I love having some of his knives (I'll probably give a few away)

And I'm looking forward to making something with the damascus that he sent me. I already have an idea about what it's going to be.

Thank you Alexander, a very detailed look at this knife that I can appreciate. I would agree with your conclusions as well.

KnifeMakerPermalink Reply by Waqas Yousaf Farooq on September 14, 2014 at 4:19

Thank you Mr.Alexander for such a detailed overview again. the points you highlighted for further improvements are noted especially about sheaths, As I sent you this stuff all on my own decisions about designs, materials and sheaths so the highlighted points can be controlled or things can be done as per demand.

I truly appreciate your approaching iKC and going through such an intense Q&A with me.  http://www.iknifecollector.com/profiles/blogs/a-pakistan-suppliers-...

Thank you!  Not only for the review, which I like very much, but for being who you are.  These reviews were something not all makers or collectors would have taken on.  You on the other hand were excited, fair and honest.

I feel as though you reviewed these knives with the same wary respect you would have wanted someone to review knives you produce and that is saying a good deal about you as a person and a maker.

It seems the tips to be more successful are close on each of the knives.

Use good steel, mark your blades and get better with each knife that is made.

KnifeMakerPermalink Reply by Waqas Yousaf Farooq on September 15, 2014 at 1:41

Thank you madam for your valuable words, I'll keep in mind !

John Bamford left a comment for Jose
17 hours ago