9/28/2013 Okay, alright! 4 months later and now I have time to beat up the Wotan. I will start off with specs today with a thorough report of the testing on Monday. First Impressions was it is a brute of a knife that felt good in the hand with the textured Kraton handle ensuring a good grip. The balance seemed a little forward of the guard, but having researched the requirements for the contract that was awarded for this knife explains that away. The sheath is efficient to the task of a quick withdrawal, although the constant testing I did forced the snap cap to remove itself from the pull tab. I was being really aggressive for this to happen.

I did proceed to put an edge on the knife that I like, the edge may not be suited to the testing I plan but I can adjust for that back to the one that came with the knife.

I will be back on Monday with test results and Pictures.

The testing is done & the results are in.

I will say the testing was limited to what I had on hand at my house, Scraps and junk. But that is not to say I couldn't come up with some decent tests, 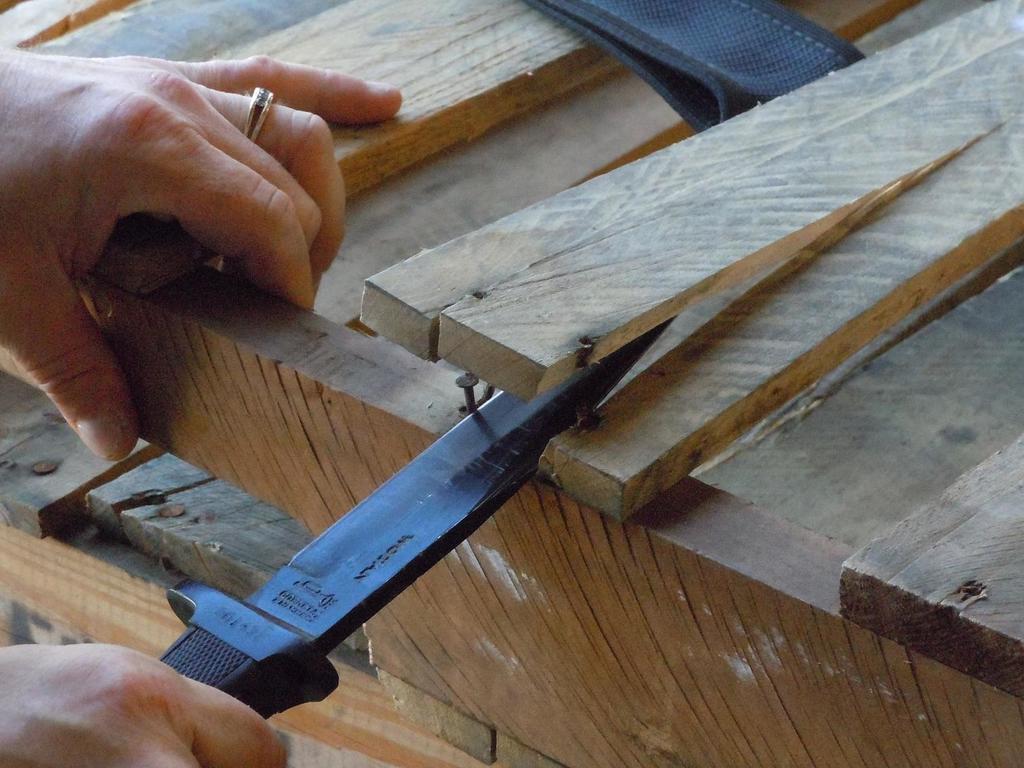 Cesar gave me this list of review testing ideas, one is for: 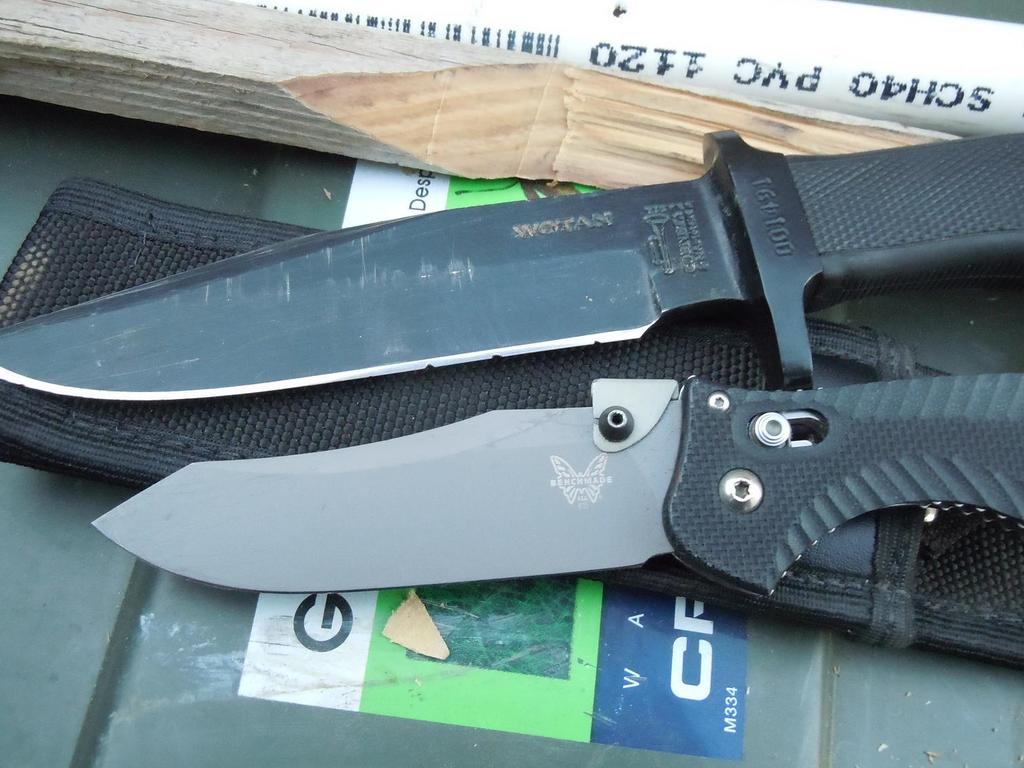 My personal opinion and rating-

Being what it is, a purpose driven Combat/tactical fixed blade, I really like this knife. I had reservations about the steel, but during the testing I was constantly checking the edge by curling paper and it kept curling paper until the Contego bit it. It is still going into my bag, but it will make a trip to the Sharpener first. 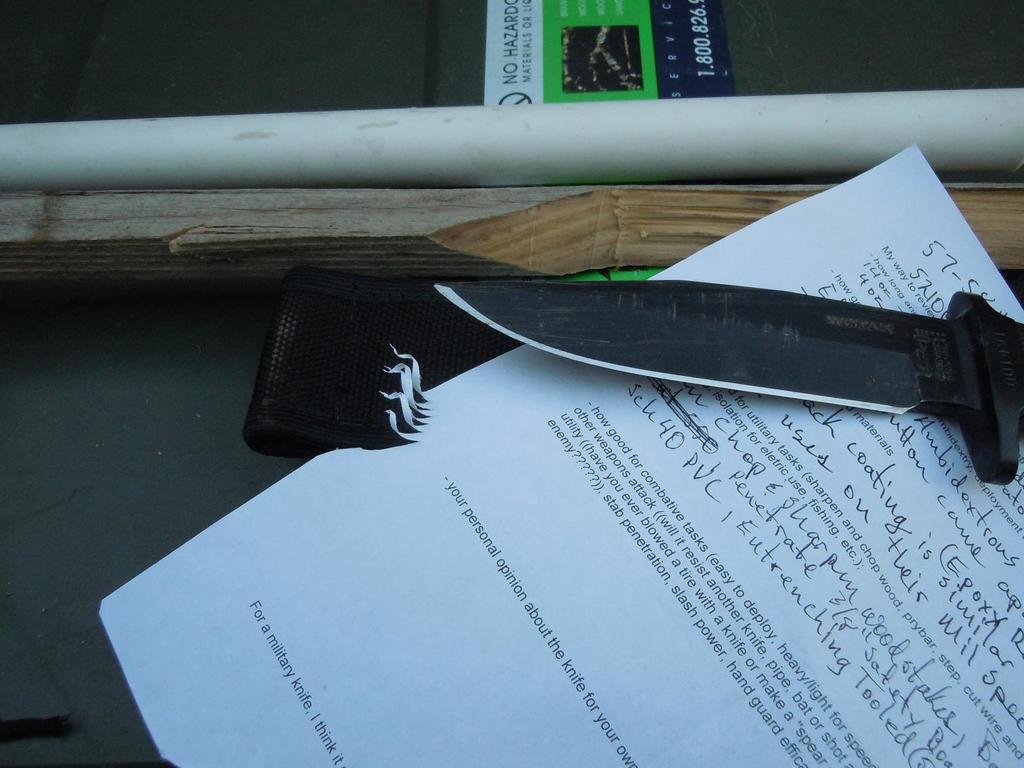 My Rating 1-5 (5 being the highest) = 4.8 Because nothing is perfect and this could only improve by using a higher end steel and better protective coating.

Recomendation- Since I traded a Case Mid Folding Hunter for this knife, I am not aware of the MSRP of this knife. But, I am extremely happy with that trade. I figure if it MSRPs around $150.00 get it.

I like that  knife.  I like the integral guard and the long ricasso and the lanyard. The blade thickness lends itself to a hollow grind with plenty of steel for strength. It doesn't surprise me that divets/chips were made in what is essentially a razor edge. I would much prefer this grind in a combat/tactical knife myself. Care would have to taken to avoid marring the finish while sharpening. The relationship between military/law-enforcement personnel and their equipment is such that proper care is expected. 52100 steel is a very good alloy steel. It isn't a true stainless, but would only rust if under the worst of conditions. The least amount of any oil (even body oil)  will keep it in excellent shape.  Thanks for doing these tests. "El Brut" es muy macho.

Excellent reciew and perfect timing.  We have the chat on Brazillian knives tonight.  I will be sure this gets included!

Well, I actually posted on Monday morning in my Amateurish review blog, but Steve explained to me that the "Sharper Review" group was a better platform for it. Hog was right.

I have 4 other Brazilian knives to review: Looks like a bunch of fantastic value knives. The one reviewed is especially cool. Look like a PRIME candidate for modifying. 52100 steel, integral bolster, slap a nice wooden handle on it and you have a knife worth every penny.

I would imagine after that series of tests some re-profiling of the blade to get those chips out. It would appear despite the wear the knife just plain held up to stress.

Don't know if would be quite as heavy duty with a wooden handle?

The Brute will have it's edge re-profiled, I don't think I will change anything else about it. Not even a new coating, He earned his scars.

One thing I would like to do is give a link of this review to Peter Hammer who is a friend on FB. Always curious what the designer would say and perhaps we can encourage his participation?

Definitely. The designer should know about all reviews of his designs.

One thing I would like to do is give a link of this review to Peter Hammer who is a friend on FB. Always curious what the designer would say and perhaps we can encourage his participation?

I have just invited Peter Hammer to be part of iKC!

Well he knows! He definitely knows!

Peter Hammer:  hope you know I'm a creator of the WOTAN project when i work together CORNETA in brazil, and the knife "HOT STELL" ia my work too, whit my student Silvana Mouzinho.

Peter Hammer: If you look whit attention in the Mark of the WOTAN you will read "CORNETA BY HAMMER" and hammer is me Peter Hammer.If you want know any thing about WONTAN project talk whit me.

Peter Hammer: Who would have guessed that, practice test by someone outside of Brazil about the knife that I created, the WOTAN.

Steve Hanner: Yes, you created an incredible knife that is very tough and tested!

Cesar : Yesterday I speak a little about Brazilian Knives at IKC and I was very specific in mention you as the Father of WOTAN, as well the Hot Steel knife with Silvana! BTW, I mentioned you as one of the best bladesmiths of our country, and do not have lied about that!

We actually have had two people join iKC one here a knifemaker and one I think a collector from Brazil on FB all beacuse of your review! Nice work!