A dicsussion group about knives of the Great Outdoors  needs to have an area to discuss all those fixed blades.  This will be a place to show off your fixed blades.  Doesn't matter if it for filet fish or just the knife you use around the camp fire.  Maybe its your favorite deer skinner!  Let's see it!

For years, the knife i took camping was my Camillus Mk2 Fighting knife.  But it is now in retirement.  Not because I found something better, just because it has too much sentimental meaning to have it confiscated by a park ranger or game warden or lost through stupidity.

My current camp knife is a Rough Rider 844 Burl Wood Hunter.  Why?  Because it has been getting the job done.  I've got Hunters by Bear & Son, Case and Buck that all cost more but  this one seems to get the job done better and cost half as much as the others.

The only issue I had with the knife was the strap for the sheath. It got in the way of taking the knife in and out of the sheath .  A little altering and all was fine. 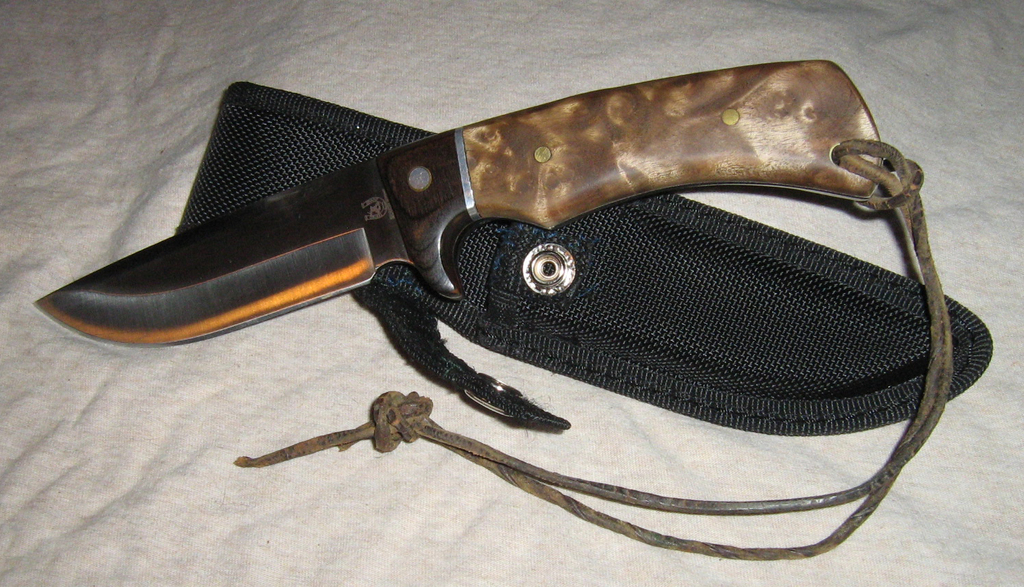 I was carrying a Benchmade Adamas Fixed blade in my bag until this Knife made the 6151 mi journey from Cesar in Brazil to me here in Orange County CA.  The Corneta Wotan. The BRUTE, is what I call it. Great looking knife.  Looks like you can grip it well.

Let me send you my address, so you can send it to me for closer inspection. LOL  What's not to like?  I really like that long ricasso for choking up on the blade. And, the lanyard hole is always a nice feature.

This is another of my fixed blades.  It is a Frost Bowie knife.  It was made in Japan.  It actually is a pretty good knife.

Brad, that is one sleek looking piece of steel!

Charles that Bowie is a monster! The Japanese Frost knves have often been complemented as being pretty decent knives!

you're not going to baton your way through a two inch sapling with a  3 5/8 inch folding camp knife. (at least not easily!)

The Great Outdoors does require big knives  quite often!

Tobias, a two inch sapling is no problem at all for that Bowie.  I use it a lot to clear brush and limbs out of my shooting lanes for deer.  It has a nice thick blade with a lot of heft to it.  I can chop with it almost as good as with my hatchet..

It's a chore. But, I got a few images of historical bowies posted in one of my knife galleries. Several other galleries and categories to go. I'll let you know when I get another batch done. Click on the images to enlarge to full size. I hope you enjoy them. You need a brake from the computer...lol

Almost all the knives I see that come from Japan, seem to be effective at their jobs.

Clay, thanks for the effort. Now, if you tell me you own all these Bowies, I'll be a-hatin your guts, cause there are some famous makers there.

What surprised me most, never having studied Bowie knives, is that several look like Chef's or Cook's knives, and the skinny ones don't look like Bowies at all.  Of course, what I know about Bowies, Hollywood and Alan Ladd taught me.  However, from my limited reading on the subject, them fellers in Sheffield, and even here, never saw Jim Bowie's knife so they used their imaginations.

Thanks for the comment Howard. The name "bowie" didn't appear until about 1840. Of course, it was to enhance sales. As it has always been, All that is required is that part of the top edge be sharpened or ground to a point that it could be easily sharpened. The lore is that in a knife fight a cut can be made when swinging either way. If the full length of both edges are sharpened, and the knife can easily be plunged, it may also be called a dagger or dirk. I try to stay with what a particular knife was called early on.

Speaking of the Hollywood version, the Iron Mistress is shown within a group of three that is located five rows down and on the right end. There were those who claimed to have seen Bowie's knife at the Alamo. But, he was known to carry a smaller knife in addition to what some called a short-sword.. Bowie's brother wasn't there. But he believed that Jim carried a large knife that he gave to him to defend himself from his enemies. James Black seemed to have graduated from making large butcher type knives to the design we are familiar with from Sheffield. Unfortunately, Black lost his sight later and could never describe the knife/knives that he made for Jim Bowie. Men going into the frontier knew that butchering game would be the main use of a knife. If it would double as a defense weapon, all the better. Some of the more crude knives that I have shown were carried in the frontier at time of the Alamo. Bowie was known to have told a man on the trail going west that the knife the man was carrying would be best left on trail somewhere. There have been endless discussions about what Jim Bowie's Alamo knife looked like. Bowie was said to have held his famous knife in an unusual, or odd, way. He was trained in the art of sword fighting. So, with that in mind, I believe he would have preferred a short-sword design that accommodated that training. I also believe he would have needed to be able to draw the knife quickly from across his waistline while on horse-back. My best guess (admittedly just that) is that the knife he carried at the Alamo was similar to the one here. Note the upturned handle that would have required the knife to be turned over in a defensive posture to enable the use of the wrist positions used in sword training at the time, while still making a thrust possible.

Bowie made by James Black

Clay, thanks for the effort. Now, if you tell me you own all these Bowies, I'll be a-hatin your guts, cause there are some famous makers there.

What surprised me most, never having studied Bowie knives, is that several look like Chef's or Cook's knives, and the skinny ones don't look like Bowies at all.  Of course, what I know about Bowies, Hollywood and Alan Ladd taught me.  However, from my limited reading on the subject, them fellers in Sheffield, and even here, never saw Jim Bowie's knife so they used their imaginations.

Steve Scheuerman (Manx) left a comment for Andy
14 hours ago