The HotSteel fixed Blade is a Ltd Edition knife from Brazilian knife makers Peter Hammer and his protege Silvana Mouzinho. 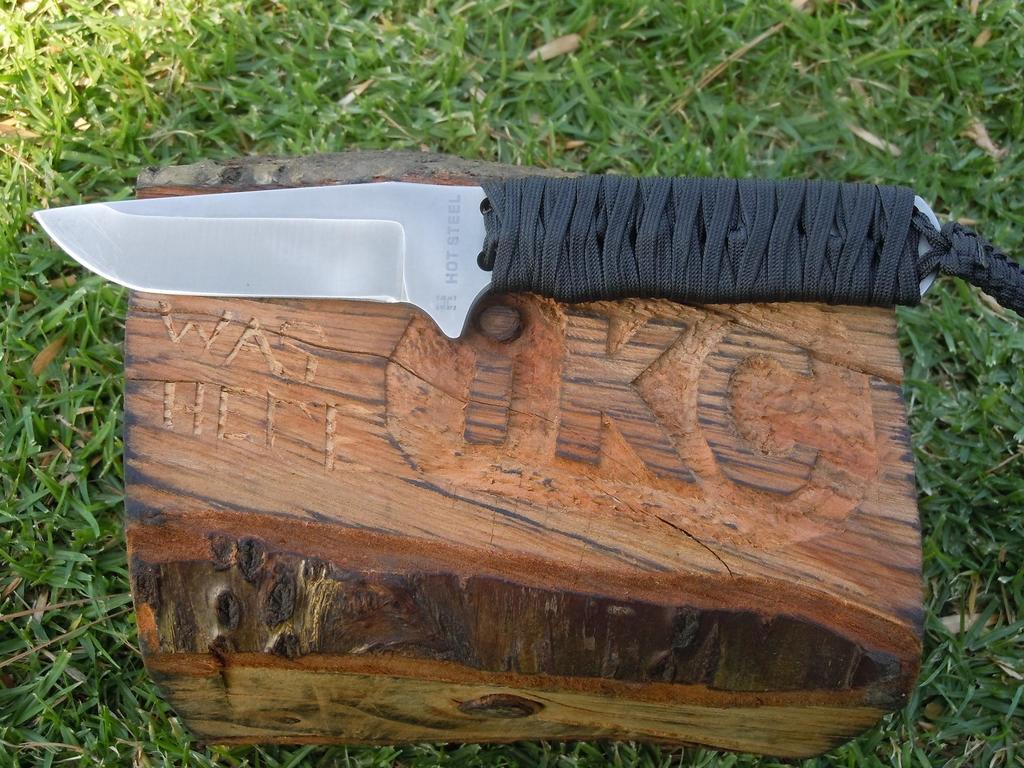 Size comparison in relation to the Wotan & Benchmade Adamas. It is about a half inch shorter than the Adamas but about 1/8" thicker. 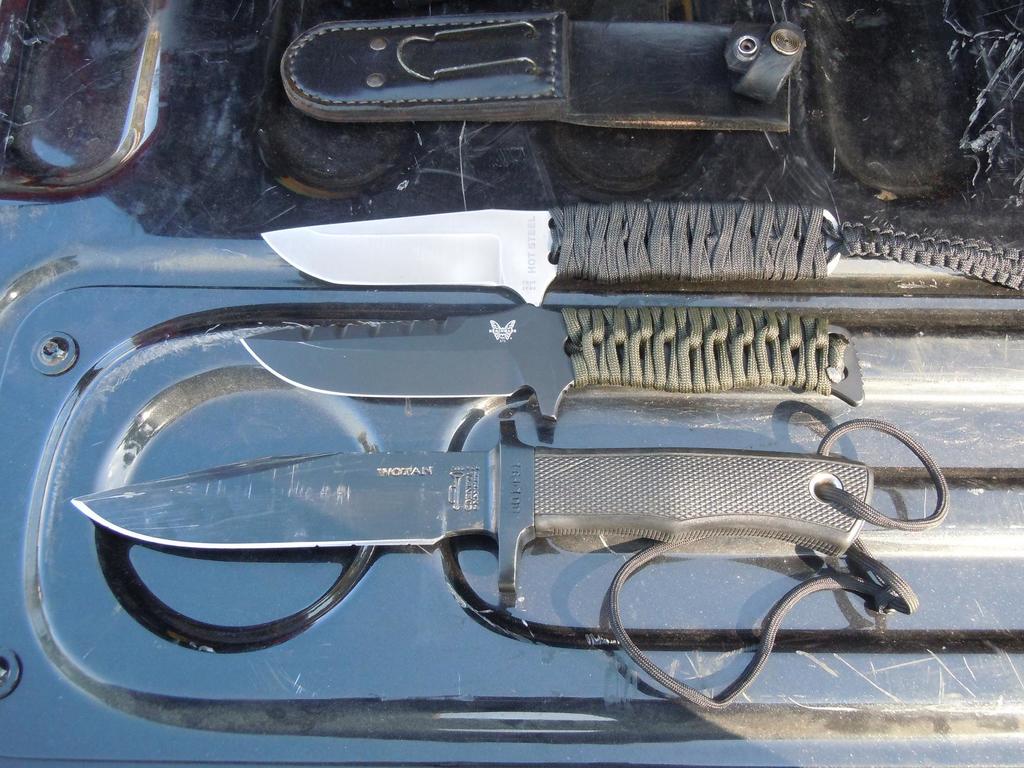 The testing I did for this knife was pretty much the same as for the Wotan. It did as well as the Wotan did in: 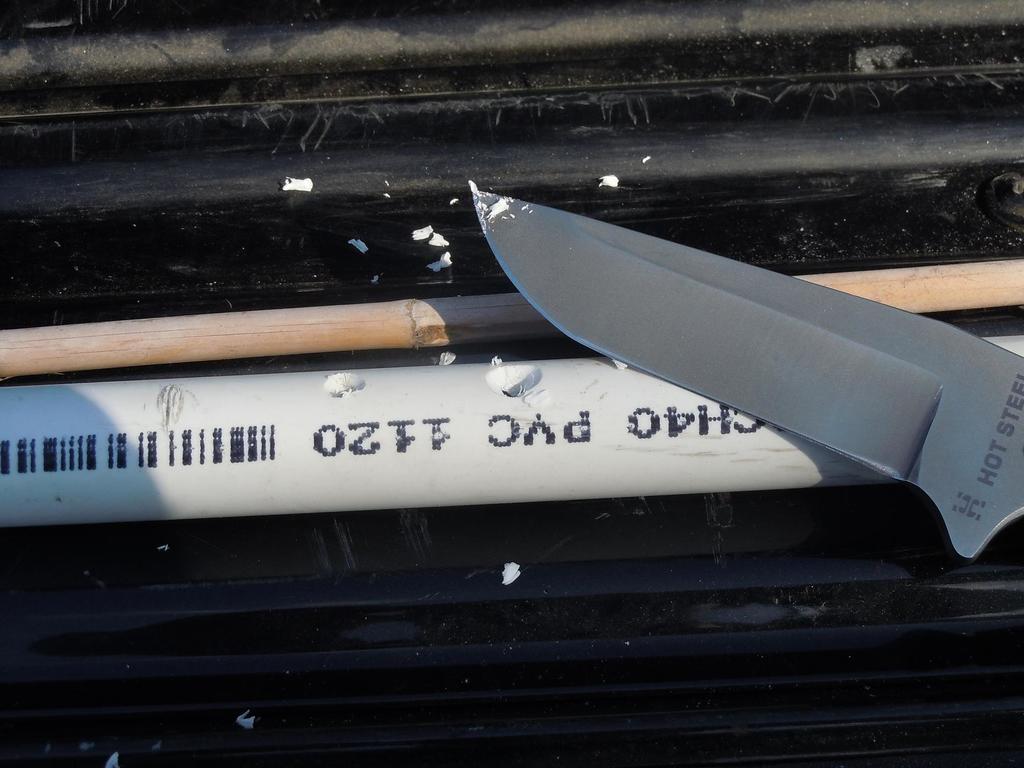 Tip strength, plunged into my Cherry Wood stump and lifted with handle for the picture below. PASS. I am holding that stump with the knife as parallel to the ground as I can, while trying to keep it still enough for an in focus picture.

I couldn't perform the puncture test on the 3/8" High density cardboard like the Wotan, because it got wet during "California Stormwatch 2013". So I did something else. 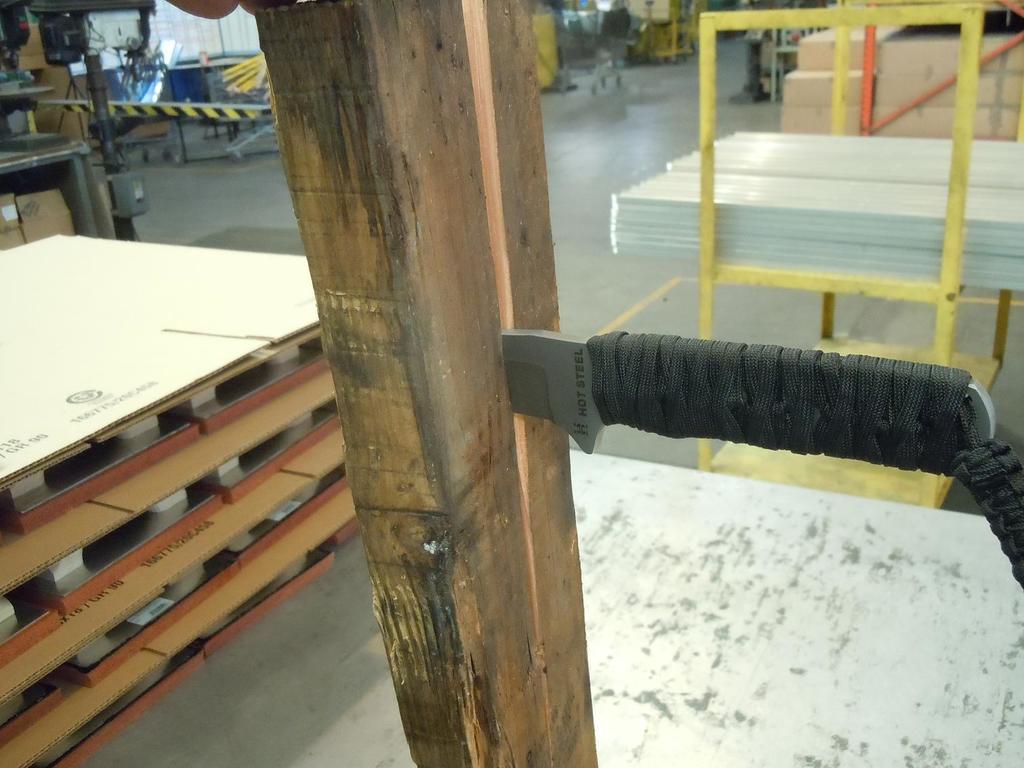 Batoning easily through a 2 x 4 and still paper curling sharp. The final tests were:

Viability for entrenching use : Any piece of steel is great for entrenching. I thrust this into my back lawn 50x's just like the Wotan, but the razor edge was gone afterwards. I tried using my Spyderco Sharp maker to bring the edge back, but I will need to use the DMT Angle finder Diamond files to get her back to shaving sharp.

Defense against another knife/blunt object: Even though I knew what would happen, I did strike the edge of the HotSteel with my Nimravus (154CM 58-59 HRC) and I received the same results as the Wotan. 1 divet in the blade where the Nimravus hit.

I like the heft and the ergonomics of the knife, the deep finger choil adds to the confidence in using the knife. In it's current configuration this knife would be great for medium duty camping chores. To step up to the big league, heavy duty tactical game, Mr. Hammer & Ms. Mouzinho would have to upgrade the steel to a D2 or better.

As stated above, in it's current configuration I would recommend this for MEDIUM duty only. If it eventually comes in a better steel, such as D2, 440C or better. I would be first in line to get one.

I like the recommendations you give for this one.  I would like to see it in a D2, I think it just might take this knife from one your willing to trade off to one you would want to keep

Personally I think 420F is only good for throwing knives....for any other type of knife I feel it's a waste of effort to make it into a knife.

Any steel that could HT to 58+HRC would have been prefferable.

I like the recommendations you give for this one.  I would like to see it in a D2, I think it just might take this knife from one your willing to trade off to one you would want to keep