Is this effecting your collection?

Special Factory Order or as we know them SFO

Long before any of us began collecting and before many of us were even born there were entire companies that did not produce their own knives.  They contracted Jobbers.  Knife Manufactures that were willing to produce a knife with a tang different than their own.  In my mind these are the original SFO’s.

The most famous of these?  Case Cutlery

The Case family was introduced to knife making when Job’s daughter, Theresa, married a cutlery salesman named John Brown Francis Champlin.  In 1882, Champlin resigned from the cutlery-importing firm of Friedmann and Lauterjung to begin his own business as a knife broker.
In this capacity, he contracted for knives to be made and then sold them under his own brand name.

The first cutlery company to use the family name was Case Brothers Cutlery Company, a brokerage firm also located in Little Valley, New York.  The company owners were Jean, John and Andrew but did not include the brother and former Cattaraugus associate, William R. Case.  The new company contracted with various knife manufactures to make knives and sold them marked with several tang stampings.

Case did not build a factory and produce their own knives until 1900.

Fast forward to the 1980’s and 1990’s when knife collecting came into its own as the type of hobby we now enjoy.

Some of the most famous in that era?  Fight N Rooster and Blue Grass Cutlery.  Neither had a manufacturing plant of their own but both produced brands with exceptional name recognition which has lasted to this day.

Where is this taking us you ask?  I want to know your take on modern SFO’s and how they differ today.  Do they affect your collection in any manner?

The most prolific modern I can think of at the moment is Shepherd Hills Cutlery.  The type of SFO they have produced is Case Knives, in the same patterns Case offers but different handles and etches.   For Case and this dealer, this is a win-win situation.  Is it a win for the collector?  An immediate response for me was always that it makes it harder to collect the Case (non SFO) branded pattern but allows for pattern collectors to have more options (spend more money?) to complete any given set.

Then there are companies that do not manufacture but contract many different manufactures to have their brand built.  When you collect those, do you know who actually did the build?  Do you care?

I have my own thought on this which I will share soon but I would love to hear your take on SFO’s past and present.  How did they or are they effecting knife collecting?

Jan-I have \ a couple dozen Case knives that were SFO's. Over 90%were made For Shepherd Hills, although I have a few made for 3 other companies. First and foremost, I have no beef with Shepherd Hills, or the other unnamed Companies. My concern, as a collector is how these SFO's hold or increase their value when many collectors do not even though they existed. Sadly, Shepherd Hills did not keep records on their SFO's til 1995. All of my many, predate that. IF--I were ever to attempt to sell these gems, I know from my own records that these were 1 of 250 or 1 of 100 SFO knives. How can I prove their rarity with a lack of reliable record keeping??-- Worried that they may not hold value like Case production knives of the same vintage--- Thoughts??

That is a thought John.   There are companies with confidentiality commitments that never disclose they made knives for someone and the buyer doesn't disclose it because they don't want the knife viewed as "somebody's SFO".  I do not know that I blame for that.  They face the questions brought up here.

Then there is the flip side, a company that has an SFO made and come right out and tell you, these are produced for us by.....

Most club knives will tell you right up front who the producer is.  We always have and always will

The only SFO's I specifically seek out are ones that my friend Charlie Campagna has made from GEC - I have a couple really nice knives that he has :"negotiated" with GEC to have small runs made - and his Barlows, or "Charlows" as some have called them, have a large following.

Many of these are very hard to get, which makes them even more desireable. Sometimes it is all about the chase.

The Real Harness Jack on the far right in this picture is just one example of the beauties that Charlie comes up with.

The only SFO knife I have is a Buck #322 Congress built by Camillus for Smokey Mountain Knife Works in 1995, it was never sold by Buck, and was only available from the SMKW catalog. As I am trying to collect all of the Camillus-made Buck 300 series knives, the #322 fits into that parameter, though it was never mentioned in Buck advertising literature as part of the 300 series. There were a few others SFO's made, or at least ordered by Buck in that series, but this is the only one I have to date. I think Case produced more SFO's than most of the others. 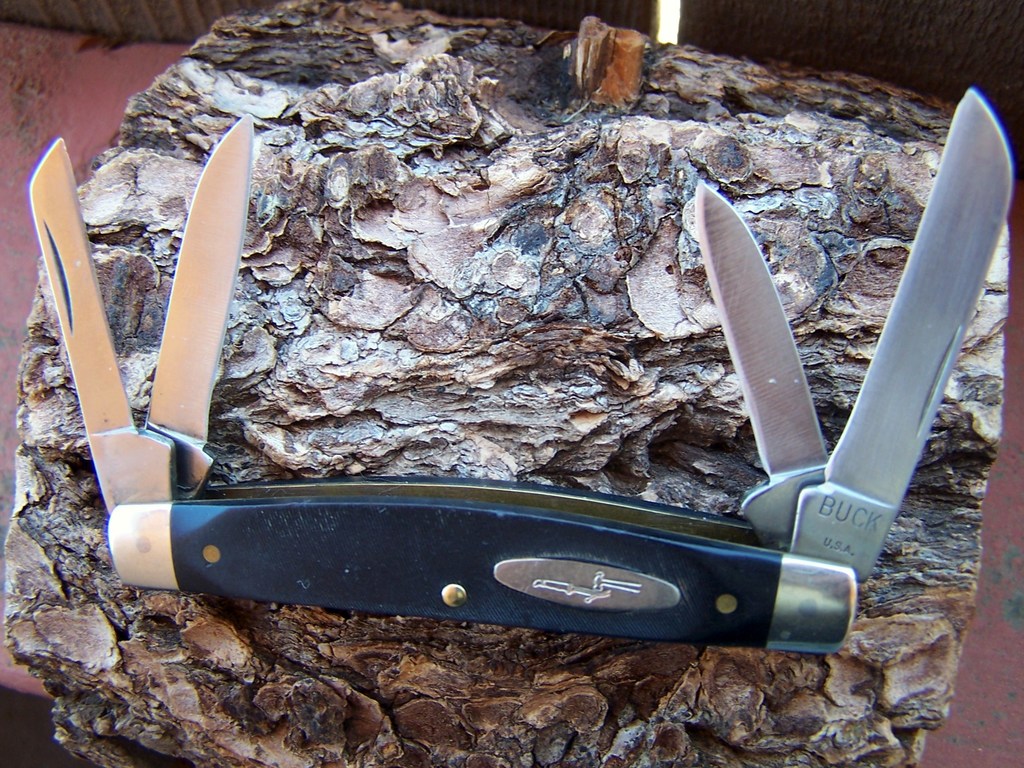