Need info on a WW2 dagger

Can anyone give me some information about this knife? All I know at this point is that it is a WW2 German dagger. Thanks! 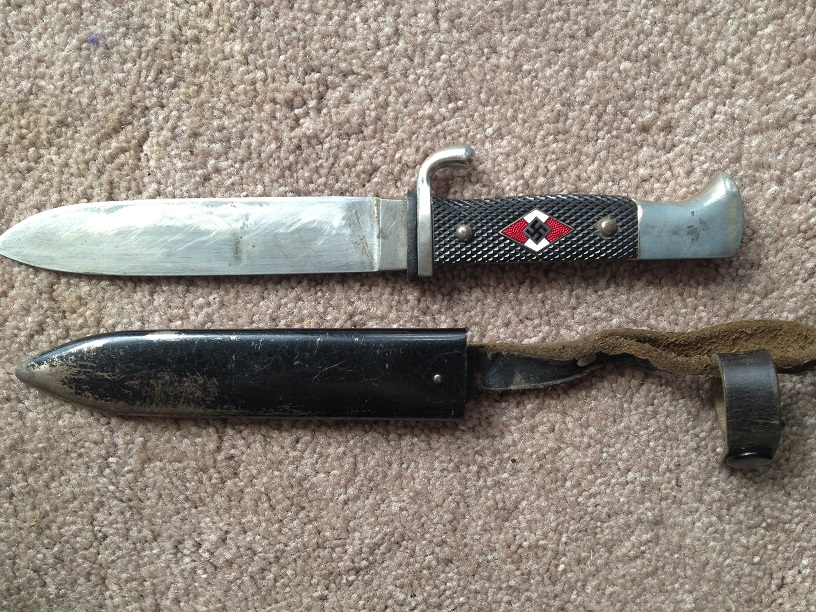 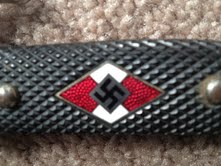 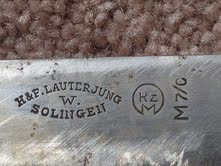 It is a fine example Paul!

Great! Thanks!  It belongs to a friend of mine. Her grandfather brought it back from Germany I believe. Now that I know what it is, I can do some more research.

Thanks Michelle. So the manufacturer was Solingren Cutlery. What does the rest of the stamp represent? H&F Lauterjung?  W.?

Paul, the knife definitely looks like a Hitlerjugend Messer.   Howere you need to check a few things becuase this same knife was used by the German Boy Scouts, pre and post Hitler and a lot of fakes are out there.   Yours looks like the real deal but it takes an expert to know for sure. I can only give you some basic things to look for.

First and foremost, Double check that swastika and make sure it wasn't replaced!

Second --Unfortunately I don't know  every German company that made them so I the tang stamp doesn't help much but if it says "Made in Germany" it probably isn't a  Hitler Youth Original.

There is no date and the motto is missing but not all HJ's had the motto.

Others things to consider:

1 Measure the handle and blade. An authentic Hitler Youth Knife has a handle that is 4 1/2 inches long and a blade that is 6 inches long. (10.5 inches overall)

2 Look for signs of nickel-plating on the knife's handle. Handles were originally nickel-plated in a checkered pattern. However, on many knives, most of the nickel plating has worn off over the years.

3 Look for the Hitler Youth swastika insignia on the obverse of the knife grip. Not all Hitler Youth Knives have the emblem, but most do. The insignia should consist of an enameled swastika design in red, white, black and gold.

4 Examine the blade and the core of the handle for evidence of solid-steel construction. The blades were made of 440 stainless steel. They should also have a flat grind.

5 Inspect the blades of Hitler Youth Knives made before 1938 for the presence of an etched motto. All blades of this period have the German phrase "Blut und Ehre," which means "Blood and Honor."  Once made during the war lack a blade etch as does many of the German Boy scout knives that look exactly the same as the HJ!

This is probably the most replicated (and faked) German knife of WWII.  The market was flooded with both repos and fakes  in the 1970s.  You can still buy repos for around $10!   and the fakes are still floating around Below is a typical replica.

Here's hopin and praying you've got the real deal, Paul.

It actually belongs to a friend. Found after her father passed away. It is the real deal. Thanks for the valuable info. I have got my feelers out for one myself now! Would love to find one at a decent price.

Paul one thing to look for is the leather washer in front of the guard.  Most fakes don't have it. Unfortunately, the altered German Boy Scout knife will!  Glad to hear the one shown is the real deal.  It should prove a great memory.

Mario replied to Mario's discussion The 'perfect' knife?
3 hours ago

Mario replied to Mario's discussion The 'perfect' knife?
3 hours ago

Featureddead_left_knife_guy left a comment for david moore
12 hours ago

Featureddead_left_knife_guy left a comment for Chris Sparks
12 hours ago

Lars Ray left a comment for david moore
19 hours ago

Lars Ray left a comment for Chris Sparks
20 hours ago