Here is a post from the BCCI, (Buck Collectors Club Inc), Facebook group that I thought I would post here for reference. It's a very concise history of a very popular series of knives. I only own one Bucklite, a #426, (same blade as a #110 Folding Hunter but with Valox handle), but now that I'm armed with this information I'm sure more will follow. One thing you might notice is the similarity between the Bucklites and the newly introduced 110 LT, (same Valox handle material but without the finger grooves.).

"article written by Steve Sullivan... It's all about Bucklites...

In 1971, GE Plastics introduced Valoxª, a new polyester resin designed for making injection-molded plastic components. It combined excellent electrical properties, high strength due to low water absorption, and very good heat resistance. Valoxª immediately became widely used by manufacturers of everything from power plugs and electronic components to car parts and home appliances. Throughout the 1970s, companies used polybutylene terephthalate polymers like Valoxª because they allowed for easy molding of strong, lightweight, oddly-shaped components. In addition to an ability to withstand harsh chemicals, Valoxª also delivered very high color stability, which led to its widespread use in the making of consumer products. Until the invention of liquid crystal polymers for optical applications in the mid-1980s, Valoxª represented the state of the art in modern, space age, engineering-quality thermoplastics.

In the early 1980s, Buck engineers were looking for a new handle material that would allow them to achieve several important goals as the company's product line expanded. First, they needed a material that would allow for lighter weight knives. Second, this new material had to deliver the same strength and rugged durability for which Buck knives were already well known. Finally, it had to allow Buck designers a way to deliver new, modern-looking knives that could be delivered at lower price points, thus expanding the market. GE's Valoxª was the clear choice, and the BuckLite was born.

First introduced in 1984, the BuckLite family of knives started small, with just three models in two handle colors. The model 422 BuckLite was fashioned after the finger-grooved 112 Ranger and used the same modified clip style blade of that model. The handle surface of these first generation BuckLites featured a very small crosshatch pattern to improve grip, with the finger-grooved side and back edge left smooth. All of the first three models were available in a rich, dark, "chocolate bar brown" color and the 422 was also offered in olive drab. These new knives came standard with an entirely new sheath design to boot, essentially a canvas pouch with a belt loop sewn into the upper half and a Velcro closure at the top. The brown knives came standard with a tan and brown sheath, and the olive drab model 422 came with a green camouflage sheath. Both sold for $12.35, and sold quite well.

The model 424 BuckLite II was essentially a thermoplastic handle version of the 501 Esquire, and used the same size and style drop point blade. Overall length of the BuckLite II was 3.75 inches, just like the 501, but sold for seven dollars less. This made for an extremely light, affordable, and very compact folding knife, and extended the BuckLite family "down-market" just enough to address the needs of the penny pinchers or those simply looking for a little less blade to clang around in their pocket. The 424 is clearly the direct ancestor of the 425 MiniBuck, which was introduced in 1987, and this earlier model helped verify that a large market existed for very small and inexpensive blades.

Finally, the model 426 BuckLite III was the real pig sticker of the family, intended for those needing more steel than the mid-sized 422 but who were not willing to accept the weight of a traditional full-sized knife. Based on the finger-grooved 110 Hunter and delivering the same overall dimensions, the 426 was really just that, a plastic handled 110 with the same blade length but a huge weight savings. I recently stopped at the post office and weighed a 1984 BuckLite III (3.4 oz.) against a 110 Hunter (7.4 oz.). The 426 delivered the same size blade at less than half the weight! The name "BuckLite" really could not have been more appropriate. Clearly, this was the lightest way to get a 110-sized blade in your pocket or on your belt, and it certainly couldn't hurt that the 426 cost (in 1984) just $13.25 compared to the 110's $21.00. There was another difference between the 426 and the 110, though. For the first two years, the 426 came with a 3.6-inch drop point blade, and of course the 110 had a 3.6 inch modified clip. But in 1986, the BuckLite III was changed to use the same exact blade as the 110, which makes the drop point style 426 somewhat of a harder find for the collector.

All of the models made during this first generation of BuckLites (1984-1987) were built from two pieces of Valoxª sandwiched on either side of the blade, a standard lockback "rocker" and a small tension bar extending from an inner plate that formed the end of the handle. This was all held together at the end with two brass rivets. The blade rotated on a slightly larger brass rivet up front, and the rocker pivoted on a small steel pin positioned about one-third of the handle length back from the blade. This was a very elegant way to apply the new material to an existing design, and one that allowed for the re-use of a number of components, such as the blades and rocker. It turned out to be a design that helped sales of the BuckLite take off from the very beginning, too, since the overall dimensions and operation so closely matched those of the other models, and were thus very familiar, but with a nice savings in both cost and weight. BuckLites weren't just lighter on your belt; they were lighter on your wallet too!

There were some interesting additions to the BuckLite family during this first generation, including a bead-blasted, black-handled 422 intended for law enforcement, special versions created for customers such as Nikon Cameras and Penn State University, and even a 1986 "scrimshaw" model, which featured a white Valoxª handle and a beautiful scene of trees, mountains, and a soaring eagle on one side. Now, technically, this was not intricate carving on real ivory, but the art scene micro-painted on the side of this inexpensive plastic handled knife nonetheless created a very attractive piece of work. This model is somewhat harder to find these days, but there are seemingly dozens of interesting members of the BuckLite family out there that pop up from time to time.

By a wide margin, the best-known "custom" BuckLites during these first four years were those created for the Boy Scouts of America. Just one year after the first BuckLite hit the streets, Buck introduced the model 412 ScoutLite, using the same design, size, and materials as the 422, but with a gorgeous bright red handle and the BSA's "Official Knife" designation etched on the blade. It came with essentially the same canvas sheath as earlier BuckLites, but in Green and Khaki with the BSA logo stitched on the outside. One year later, the ScoutLite was joined by the model 414 CubLite, intended for younger scouts and, of course, based on the 424 BuckLite II, but this time with a really nice dark blue Valoxª handle and, as expected, an appropriately stitched blue and yellow Cub Scout labeled sheath.

In 1988, the BuckLite family was redesigned. For the next eight years, this "second generation" of models saw evolution mostly in the area of handle color, but no radical physical design changes were made beyond this new iteration. The 422, 424, and 426 all used the same size and style of blade as the previous generation, with the primary change being to the construction of the handle. Instead of the two pieces of Valoxª used in the first model, Buck was able to injection-mold a single piece of thermoplastic for the entire handle. This new design was solid at the handle end and open at the front to accept the blade, which is held in place with and pivots on a single brass rivet. An open groove formed along the back accommodates the rocker, and the tension bar for the lock is inserted into a small hole formed at the base of the handle just for that purpose. This eliminated both of the handle end rivets needed in the previous model to hold the "sandwich" together, and allowed for a lanyard hole, which no previous Bucklite had. This so-called "unitized" handle also delivered a further weight reduction, and the 426 dropped from 3.4 to 3.1 ounces. A series of four small horizontal stripes along the back edge of the handle and a new pattern to the texturing completed the redesign, and this generation is easily identified by these features. Another hallmark of these second generation BuckLites is that they were made available, starting in 1991, with bright orange and even camouflage handles, allowing any BuckLite owner to either more easily find, or more easily lose, their knife, depending on whether the knife was dropped in the woods or in a truck full of pumpkins."

Here is a photo of the Bucklite #426 I carry in my fanny pack every day, it's beat up but being nearly indestructible I don't worry a bit about scratching it up, please feel free to post photos of yours if you have them. 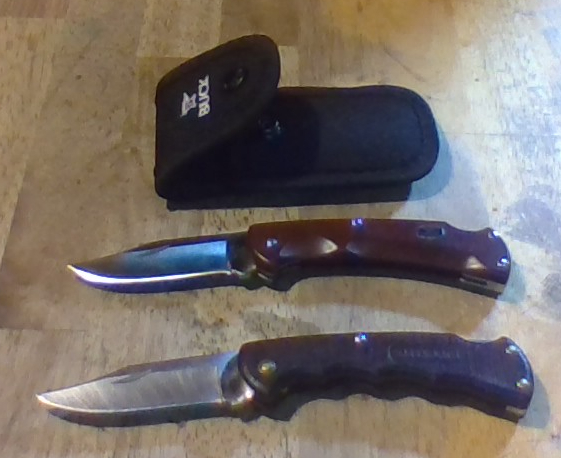 My new and new-to-me BHK knives