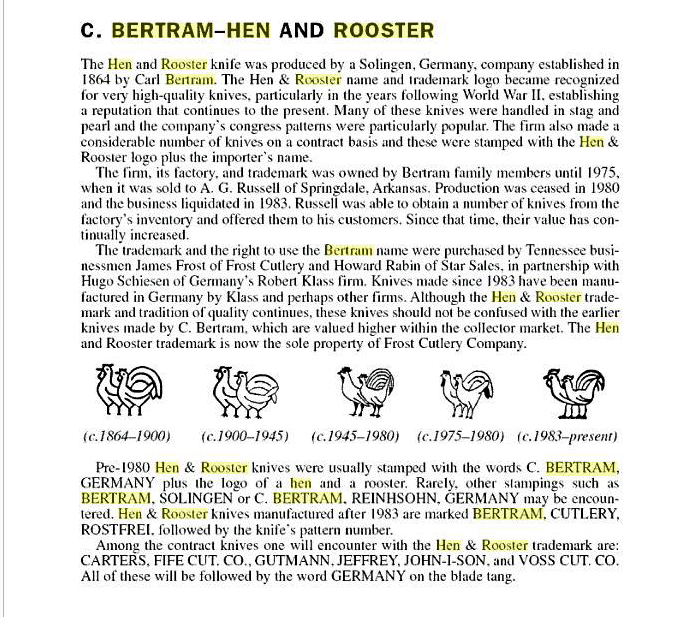 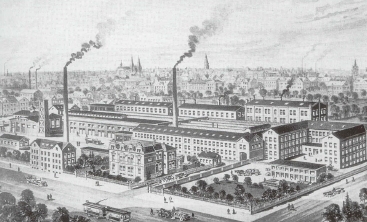 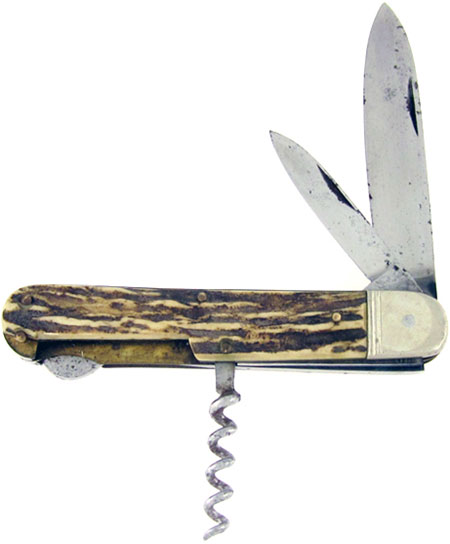 Conceived and hand-made in about 1845, the Hen & Rooster® brand had a modest beginning as the notion of Carl Bertram. Mr. Bertram was a well known owner of a poultry business in Solingen, Germany where he began manufacturing his own line of cutlery. Because of his association with the poultry industry in the surrounding communities, Bertram adopted the now famous Hen & Rooster® logo to mark his brand in about 1865. The small cutlery manufacturing facility of old has produced what many consider to be some of the “Worlds Finest Cutlery Since 1845”. The Hen & Rooster® logo is synonymous with high grade cutlery and superior workmanship exemplified by each manufactured knife. Over two hundred hand operations go into the creation of these superior knives. Only pocket knives manufactured by master cutlers from Solingen, Germany devoted to the details of polishing, fit, and finish of each product, earn the right to bear the Hen & Rooster® logo.

Carl Bertram's company continued manufacturing its fine cutlery under the leadership of several family members for many years. The original firm manufactured contract knives with Hen & Rooster on one side of the blade tang, and numerous other names on the reverse side. Bertram made these knives in the late 1960’s and early 1970’s for Carter Cutlery, Carter, Jeffrey, Kane, Voss, John-I-Son, Ky-Col, Gutmann Cutlery, Fife Cutlery, Mar-cal, A.G. Russell, L & N Loan Co. and Field & Co. All of these knives bear the Hen & Rooster markings. Knives marked “*Germany*” were produced in approximately 1980. In 1975, the firm was purchased by A.G. Russell of Springdale, Arkansas. Mr. Russell’s company owned the Bertram Hen & Rooster® manufacturing facility, and brand for a five year span. During this time Mr. Russell produced Hen & Rooster knives & knives bearing his own trademark. He also made many contract knives for other firms bearing the Hen & Rooster® logo on one side of the blade tang and the contract’s firm name on the reverse side. The firm continued to be managed by a member of Mr. Russell’s family under his leadership until approximately 1980 when the factory in Solingen, Germany closed. In 1983, the firm was liquidated, and the Hen & Rooster trademark and the Bertram name were acquired by James Frost of Frost Cutlery, Chattanooga, Tennessee; Howard Rabin of Star Sales, of Knoxville, Tennessee; and Hugo Schiesen of Robert Klaas, out of Solingen, Germany. After a short period of time, and prior to the retirement of Howard Rabin, Mr. James Frost bought the sole rights to the mark and distribution of all Hen & Rooster knives in the United States. Mr. Frost holds firm to the long distinguished tradition begun by Mr. Bertram; ensuring the superior craftsmanship of each Hen & Rooster knife. These pocket knives continue to be manufactured by highly skilled craftsman in Solingen, Germany. Through it's reputation of excellence, Hen & Rooster® continues carries the title of “World’s Finest Since 1845”.

So apparently when Frost bought the name Robert, it was a conglomerate of knife makers.  Then it was sold to Mr. Frost as Sues research stated.  Based on her timeline info and this, where it says "after a short period of time" must have been a VERY short period of time

Bertram, the maker of the original Hen & Rooster knives, was founded in 1865 and quickly became the finest knife made in Solingen, Germany. In fact, the knives made between 1865 and 1980 in the tiny factory with 14 employees when the company was purchased, remain the finest traditional, production, pocketknives know today. The blades are better ground, better finished, and the insides of the knives are so clean they appear to have been mirror finished inside as well as outside.

For years Hen & Rooster has been know for the meticulous designs of their folding knives. Now Hen & Rooster offers this same attention to detail in hunting knives and bowie knives. Also be sure to check out Hen & Rooster's fine line of kitchen cutlery.

About Hen and Rooster

The Hen and Rooster is not centered directly in the marketplace. Their products are high-priced to match high quality, and they tend to sell luxury items, such as mother of pearl pocket knives along with their kitchen knives, appealing to the more expensive audiences. For the people who want to spend more money and have extravagant possessions, Hen and Rooster is appealing. However, in the current marketplace, such a company is not the main contender.

History Of Hen and Rooster

The Hen and Rooster is a company with a longtime history in cutlery and pocket knives. The mind behind Hen and Rooster, Carl Bertram, ran a successful poultry farm in Solingen, Germany. While in Germany, he ventured to make his own cutlery to be efficient, and thus began Beltram's new business in creating fine cutting products in 1845. In 1865, as his company grew and needed a logo, Beltram fashioned the insignia of the Hen and Rooster to commemorate where his company was born. Since then the company has been selling high quality cutlery, expanding their product line to include items imported from other countries such as Spain, Scotland, and China.

Thanks Miss Sue, I have just started collecting vintage Hen and Roosters. I bought a knife that I thought was a pre 1980 and because I didn't know the right tang stamps, I bought one that was made in the early 1980's. This info really helps collectors, thanks again, I appreciate your info.

Your welcome Robert, glad i could help!

The Hen & Rooster knives that were made under the care and guidance of Mr. A.G. Russell (1975 ~ 1980) are some of the finest knives to ever come out of Solingen, Germany! I have only recently been fortunate enough to lay hands on one and it seems to have cast a spell upon me because I now have two in my possession with two more on the way!

I had always admired these knives that were designed by Mr. Russell. I even had a decent copy of the CM-6 that being a H&R 261 MI. But it wasn't a "Bertram" Hen & Rooster. So now it looks like I'm hopelessly addicted to these early Bertram knives. And with good reason! They are really great knives! I tip my hat to Mr. Russell. Kudos, sir!

Now, with these actual Bertram knives in my possession, I feel a kinship and a connection with what you have accomplished in the cutlery world. I appreciate these knives more than you will ever know. Just last evening I purchased a CM-7 .45 Long Colt knife #381 from a man who told me that he bought the knife from you at a knife show in Arkansas and that you had taken the knife out of your own pocket to sell it to him.

Whether that story is true or not I may never know. What I do know for sure is that the knife was mailed and postmarked in Pocahontas, Arkansas. It is presently headed my way and I should have it on Wednesday of this week, May 18 in the year of our Lord, 2016.

And with this message I suppose I am resurrecting this Hen & Rooster Clubhouse ~ So, come one and come all! Let me see those Roosters...Let 'em crow, folks!

Here's my first contribution, a collage of a Bertram CM-6 in Stag and CM-7 in Jacaranda (Please no Hen & Roosters after 1980 that would be disrespectful to Mr. Russell) 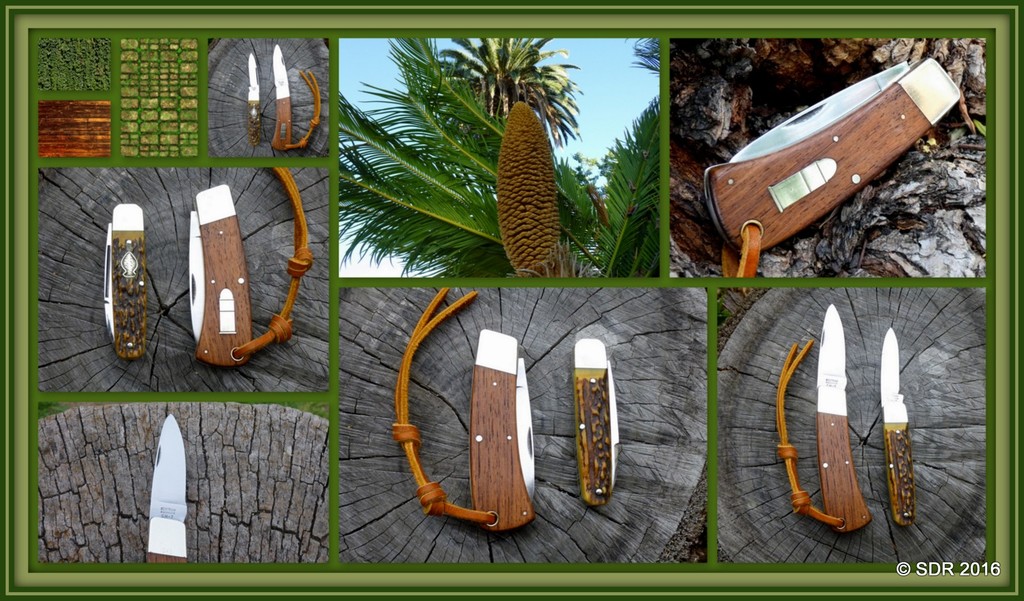 Jon Johnson is now a member of iKnife Collector
7 hours ago
Welcome Them!

Dennis Hibar replied to Dennis Hibar's discussion A new iKC calendar and a new year of knives!
23 hours ago