I am by no expert on fishing lures, new or old, but my latest trip to Dowagiac, Michigan, home of the Original Heddon Lures peaked my interest. I suspect others out there either use or collect  artificial bait so I thought I'd start a thread about it in hopes of learning more about past and current lures both collecting and using.

I've order several books but it is more fun talking this stuff with other enthusiasts.  I recently purchased three Heddon lures for about $10. I doubt they are very old but they looked pretty cool and the price seemed fair.  I'm thinking of picking up maybe 30 or so to make a nice wall display.

Are there any other must haves?  I know I'm going to grab a mudbug and some kind of giant muskie lure.  Any other thoughts. 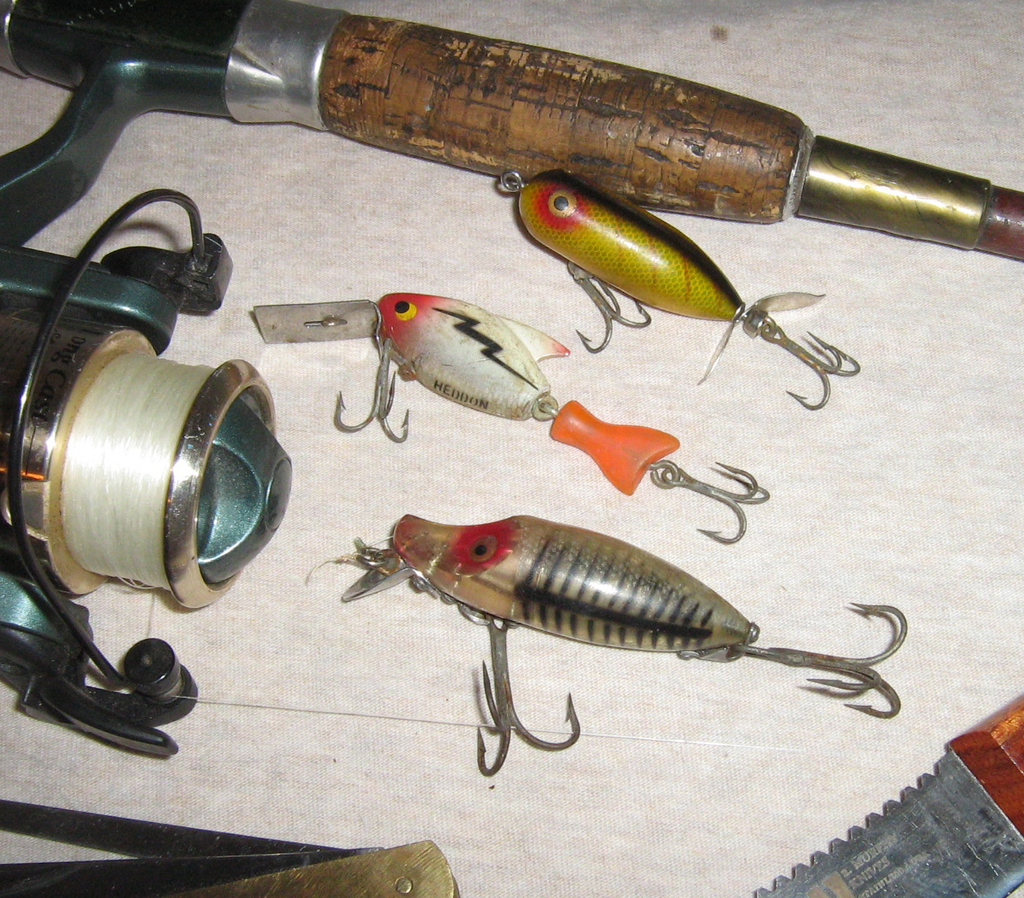 Great topic Tobias.  I have my fathers tackle box which contains many old lures going back to the 1950's or so.  I'm not sure if I should fish with them or not.  Some of these things are huge.  I know he was using them to fish for muskie or northern pike but I've seen fish smaller than these lures.  Others are still in their boxes, I don't think he ever fished with them.  Then again, others have 50 year old fish guts on them, I need to clean them.  I have been planning on going through his tackle box because it is a mess of lures and old fishing line all tangled up together.  Maybe I'll get some pictures when I get it cleaned up.

Tobias, get a Jitterbug and a Hula Popper.  They are top water lures.  Seeing a big bass smash one of those is really exciting.

you,ve got to have an old jitterbug, for sure..

The guys are right, jitterbug, hula popper, and this one "redhead". The last one, the redhead, has a body shape like the tiny torpedo in your photograph.

Back in the 40s and 50s every outdoors magazine had ads for those three.

Oh, I forgot, I have a friend that collects vintage fishing lures.

I agree. I still have my Hula Popper and Jitterbugs I got when I was in high school.  Caught many bass on them.  It is fun to watch them come up and grab that popper and set the hook.  Love it. 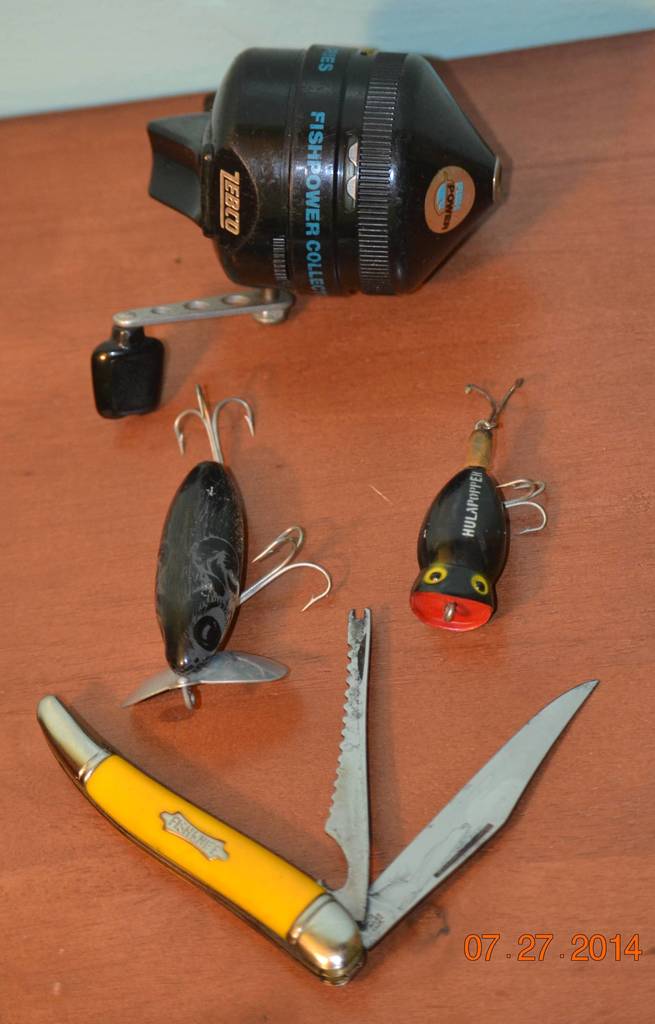 The Jitterbug you just reel across the top of the water.  The lip makes a gurgling sound as it wobbles side to side.  You reel the Hula Popper in jerks.  Each time you jerk it, it chugs the water.  It is really exciting to see a big bass smash either one of those lures.  I once actually had a bass leap out of the water and come down on the Jitterbug.

At the top is the ubiquitous Zebco 202.  I caught many a fish on a 202.  To this day the rod and reel that I have caught the most fish on was a Zebco 202 and a rod I got with my mother's trading stamps.  The knife is an Imperial fish knife.

But as a kid growing up on the farm, my outfit before I got a rod and reel was a persimmon sprout with maybe fish line but most of the time just that white store twine.  Sometimes a cork, sometimes not.  Bait would be worms that I dug at the wood pile or a piece of bread that I would make into little dough balls or catch grasshoppers or little frogs at the pond edge.  We had several ponds on the farm and a creek.  I caught hundreds of fish that way!  They were just small sunfish but to me they were as good as whales!  (It doesn't take a very big fish to put up a good fight on a persimmon sprout!)

What would you say is a good price for an older jitterbug and hula dancer?  Also would you fish with a modern equivalent of either.   What do you guys think of the Shakespeare Glo-lite?

tobias.. you can get a variety pack on amazon for 10 bucks... but if you get into the large jitterbugs, and special colors you can spend quite a bit more than that.. i believe the variety pack is the smaller sized ones, but they come in any different sizes and weights. i hava only ever had luck with the small ones. they do make a lot of racket...lol  which is gopod in alot of situations, i have had my best luck with the fat bob type top water lures tho. and the rubber worm  is always my backup.  the shak4speare ugly stik is a great rod.little on the flimsy side.. but very sensitive and tough.. i dont know about thier lures tho' i havnt had alot of luick with thier reels.. to be fair tho' i;ve never used thier upper line stuff,  mainly a shimano ,or penn man myself.

btw.. ive fished the fl keys my whole life, mainly backwater in a small 14 ft boat.. now i live in tn, and fish the rivers and lakes..   i will tell you that if you ever want to fish tarpon, in the channels of flats, a cheap shiny spoon works great ! In the channels , a large stick bait is my favorite. It can get to be expensive using artificial lures tho. have fun ! and look out for the trees !!  lol  and  {edit}  oh boy, i could talk fishing all day.. you can find some good deals in yard sales, but main reason for edit is.. on your lures, like the one in the middle of your pic.. the scoop on front can be adjusted with  a pair of plies carefully, to make yourf lure dive quicker, or run deeper {or shallower} depending on situation... if you find a slow day, finicky eaters, you can adjust your lure to dive hard and bounce the bottom.. alot of times the big boys lay close to the bottom... good luck !

Thanks Jeff.   I saw that variety pack (actually two different packs plus a few other three-fer packs all for under $10.

I've got an old Shakespeare Cirrus AXL reel (see picture) on a seven foot unidentified pole.  The pole was left in my home by the former owner.  I bought the real at a flea market for $5.  Both work and look great but a seven foot pole is more than I really need. (I'll need to take a  better pic of the rod handle and reel.)   Shakespeare has been making fishing tackle for around 100 years or so.  They must be doing something right. I think they have some type of association with Berkley.

I've  mostly  used low end Zebco rod/reel combinations.  My latest was one in the Duck Commander (Duck Dynasty) line.  I bought the CEO.  It was on sale for $20 and I needed a pole.  It's really better than I thought it would be especially for $20.  We nicknamed it the "Willie Stick" LOL

I'm looking at picking up a something more mid range.  Right now I’m looking at the Pflueger GX-7 Trion  but need to see it in person.  I'm looking for something around 6 feet long.

I'm also looking at the Wright & McGill Tony Roach Ice Light Spin Fishing Combo, 24-Inch, Brown for Ice fishing.   I’ve got a nice little one by a company called Ice Cold right now.     I haven’t done much Ice fishing but want to try my luck this year.  Plus the 24 rod and reel combos are great for confined areas and bug-out bags!   But  considering you're using a 4 pound line, it isn't going to land you that trophy bass!

I’ve also thought long and hard about the 4’ 6” Ugly Stick but would probably match it with a different reel.

Kevin D left a comment for Derek
18 minutes ago

Jon Johnson is now a member of iKnife Collector
22 hours ago
Welcome Them!