Outdoor knives from around the world.

I thought it might be interesting to have a gallery of outdoor knives as used by different cultures or nations from around the world.  I'm familiar with some of the more famous knives such as the Kukri from Nepal and the Inuit  Ulu but I know there must literally be thousands of knives that are associated with the various ethnic groups and nations from around the world. I'm sure there has to be more to the Outdoors than the Buck 110 and the Western Bowie!

For Instance these Okapi Folders from South Africa.  Are these actually used by South Africans or are they just made for the tourist trade? Either way, lets see some outdoor knives from around the World.

The Okapi is a lockback or slipjoint knife originally produced in 1902 for export to Germany's colonies in Africa. The knife takes its name from the giraffe-like central African okapi.

Okapi knives are no longer produced in Germany; in 1988, Okapi South Africa (then trading as All Round Tooling) bought the trademark and tooling and began producing the Okapi line of knives in South Africa. The South African Okapi lockback knives are produced with carbon or stainless steel blades, with or without serrations. The most commonly found Okapi knives in Africa are made of resin impregnated wood (usually cherry) and the blades are made of 1055 carbon steel.

Okapi knives are mainly used by working-class people due to being very affordable and, while crude in appearance, are robust knives. Okapi knives are very popular in Southern Africa, but have a rather nefarious reputation as they are associated with criminals and street gangs. Due to the use of Okapis by criminals they have been nicknamed "the Saturday night special" of knives. In Jamaica, they are both a tool and one of the more favoured of the "ratchet knives" carried by rude boys and are also known as the "3 star ratchet." [1] Keith Richards of the Rolling Stones was known to carry for years a large Okapi lockback he was given in Jamaica.[citation needed]

Use can range from harvesting crops, self-defense, hunting, fishing, or general knife duty.

Great knife! I love mine. Cold Steel does a knock-off on this one, and disparages the original Okapi. Pretty poor marketing if you ask me. But I won't buy a Cold Steel product again. Don't care for their customer service.

Hi Dennis, Funny you should say that about the Cold Steel "Kudo 20K"  I just order it from Amazon.  It hasn't arrived yet.  I bought it to compar eit to the original.  The Okapi is quite interesting, especially in its crudity.  The external spring is fascinating as it the ring used to release the blade.  If there is one thing I would like to see on it is a steel bolster or liner for the blade as the blade simply drops in to the wood handle and is held in place by a pin that passes through the wood. I'm not sure how much abuse it can take. 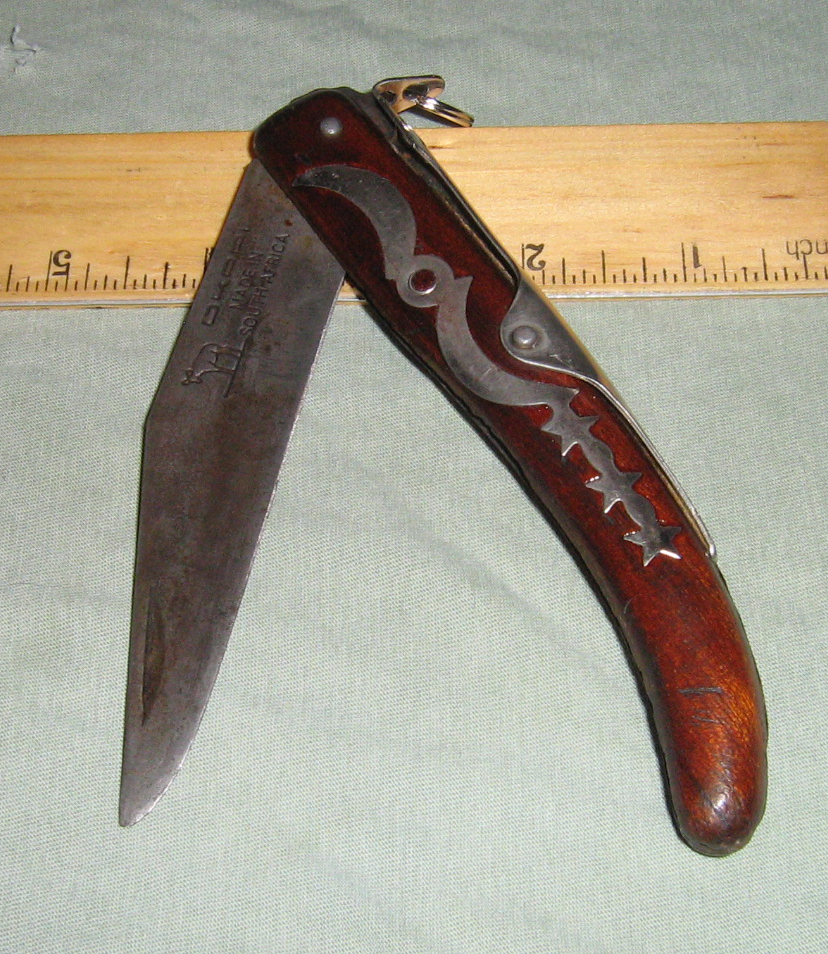 But I'm sure there are other knives from around the world

It's tough enough. It's made for workmen and farmers, so it'll take abuse. It's also cheap enough to buy another if it breaks.