Queen Button Locks are single blade knives that open manually with a nail nick and normal backspring pressure, but have a spring loaded pin that engages an opening in the base of the blade, locking it open. The small button on the bolster at the base of the blade has to be pushed to unlock and close the blade. The Queen Historical Documents site includes a report for all the cataloged versions of the two patterns, mid-size (#410 B) and large (44 B) http://www.queencutlery.com/uploads/Button_Locks_Report_6-26-2014.pdf. As Steve Pieffer mentioned in an earlier post, the 410B is built off the regular #41 frame, “Copperhead” and the larger 44B is built off the traditional “Large Folding Hunter, #44 frame. All cataloged versions were offered only in Queen Steel with Chipped Bark Delrin , a relief Knife Q shield and nickel silver bolsters They did not have half stops. They can be viewed in Historical Documents Advertising material: http://www.queencutlery.com/1996-98.php )This design is shown in all four catalog pages we have for the Button Lock series, covering seven years

Our Catalog listing is missing 1985 and 1986, so it is possible these knives were offered before 1987, but 1987 to 2000 are the only years the knife was shown in catalog or price list. They were not offered in the 1984 price list, so the knives had a substantial production of 13-15 years with very few changes – even the very stable Chipped Bark series and the Rawhide Series had changes in patterns and handle materials compared to the Button Locks.

One of us (FF) was advised to buy the new version Button Locks when they appeared by Mrs. Cecil Clark, Newport, KY (Cecil Clark Knives ,( http://www.clarkknives.com/Queen_bymfg_231-3-1.html) as early as 1982. It seem that the earliest versions included a black staminawood handle and distinctive slanted nickel silver bolsters ( See Figure 1). The larger version showed a blade etch with #5170. Our version is an example of abusive sharpening, but some nicer versions with sheath are sometimes seen for sale. The smaller Copperhead version does not show any blade etch and is hardly ever seen for sale. (See Figure 2 for both versions). These knives were not cataloged to our knowledge (unless in 1985-1986). The success of the Chipped Bark line might have led to the adoption of the less expensive Delrin handle and catalogging these knives up through 2000..

. Though not cataloged, there are examples of a 410B version done in brown staminawood with nickel silver bolsters and an incised Q knife shield in the period 1993-1994 ( See figure 3)

These knives are tang stamp dated to the same period when the more common Chipped Bark version knife was still cataloged. These knives are occasionally seen for sale and often show signs of hard use and sharpening. They have sold for less than $30 in our experience. These might have been a Special Factory Order and no large 44Bs in this style have been identified to date.

Button locks remain an interesting part of Queen's history. These were one of the innovations that proved successful in the market and lasted near 15 years in production, until Queen shifted toward the current emphasis on smaller editions of different knives and changing handle materials. Button Lock knives would have been less expensive to make and sell compared to the other locking knives Queen offered during this time (Both Rawhides and Hawk Series), but they did lock and used the same Queen Steel, so they could have competed on price as everyday carry knives. Most of them offered for sale now do show signs of hard use.

Like a number of locking knives in the 1980s they developed a reputation for not wanting to close up securely on opening. While the factory staff at the time reported getting a number of these back for service, there was usually nothing mechanically wrong with them. The solution was the pocket lint, and dried material from daily use ( apple, orange juice, fingernail pieces,plain dirt – use your imagination ) had to be occasionally cleaned out. A lesson most knife users actually have to come to grips with. If kept reasonably clean, these knives gave reasonable service – the reason they are not easy to find today – in our opinion most of them have been “used-up.”.

If any of you have more to add to this story, especially in the early history of this series, or other Button Lock variations, please add it to this beginning. Thank you! 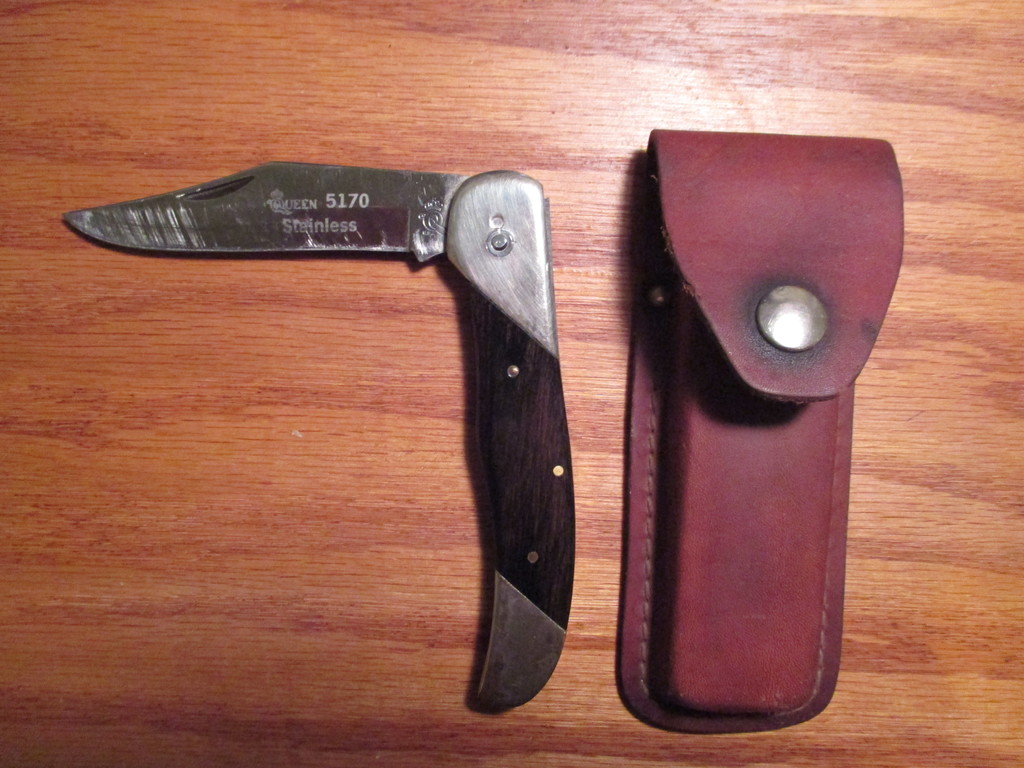 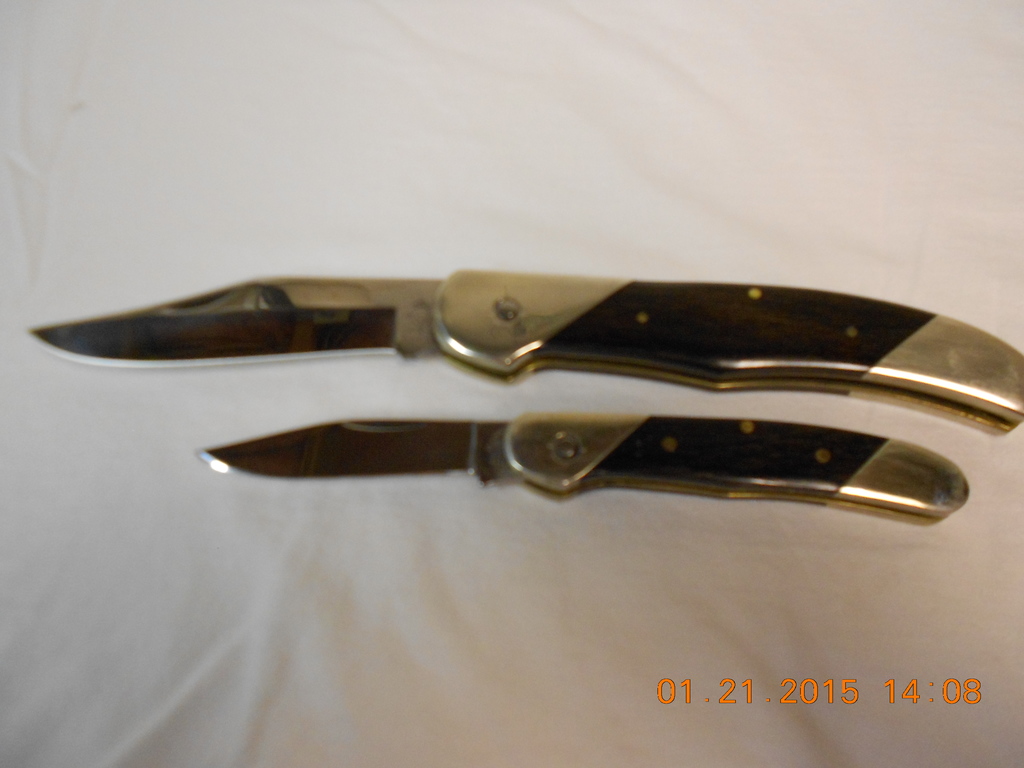 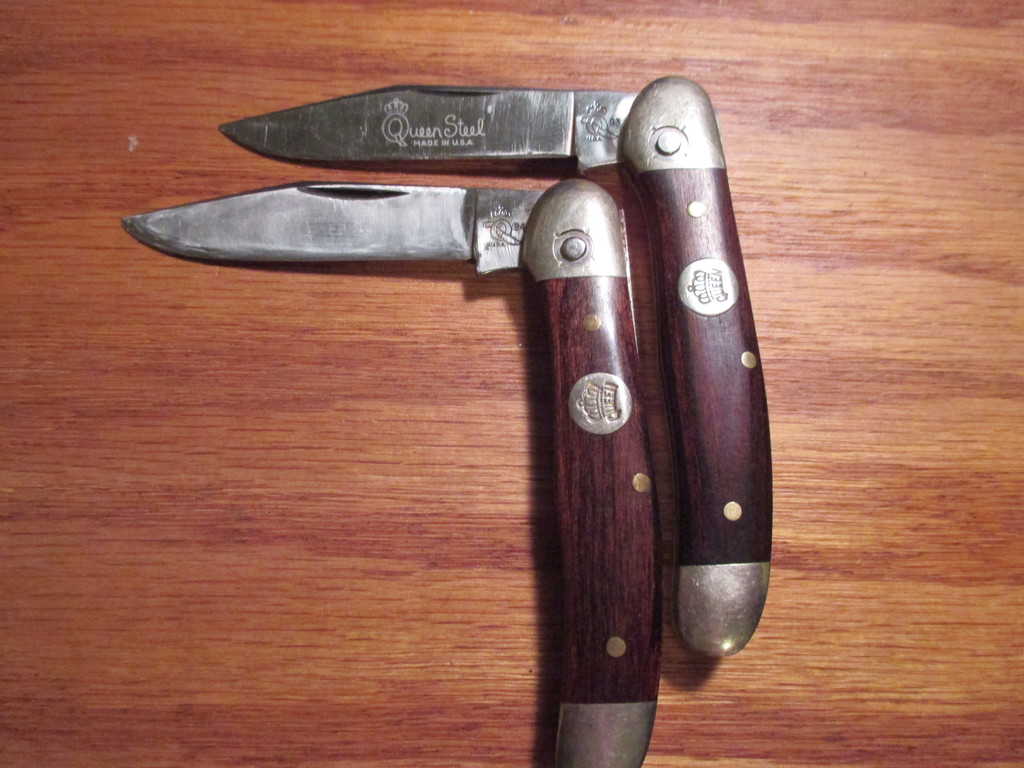 No sooner say, "Never saw that knife" than up pops one.  Attached image shows one of the big 44B knives in brown staminawood with incised queen shield.I cannot read all of the tang stamp, but it is sometime in the 1990s - probably close to the smaller versions in 1993-1994.  This knife has been on Ebay and is getting a lot of interest.

oh my goodness Dan, well maybe one day I might be able to find one of those .Did not even know they had push button knives! Thanks for that information.

I looked through my knives and I found 2 of these.  1 is the slant bolster model and has no date.  The

other is the straight bolster model and is dated 93. Here is a picture. 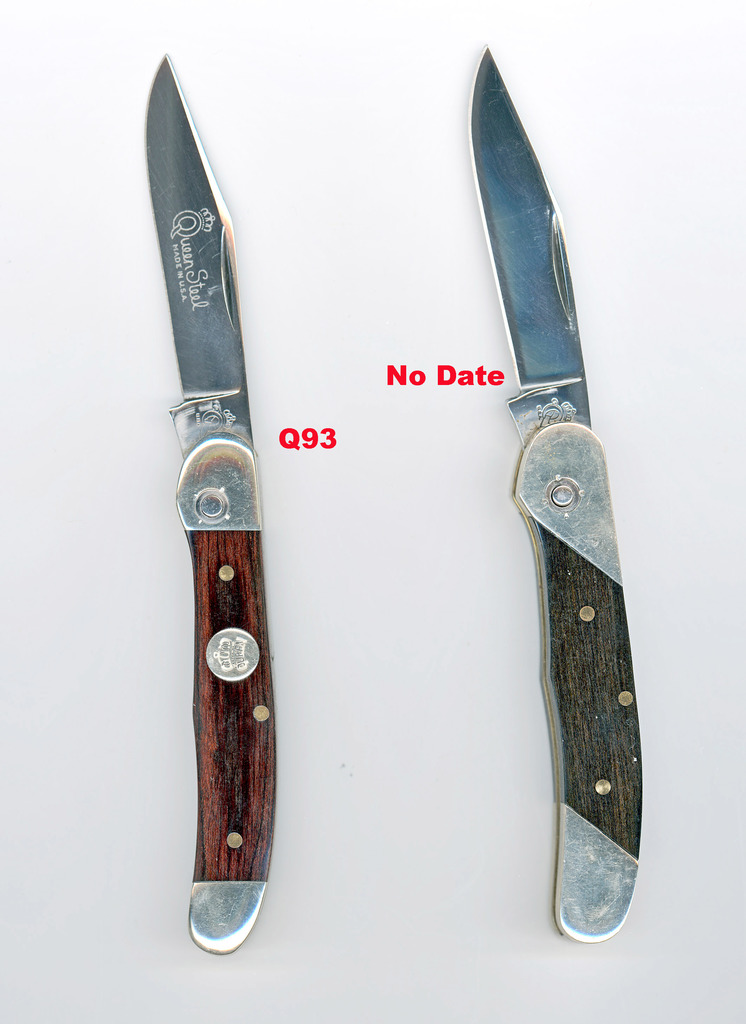 I also found this article printed in the Jan. 1986 Knife Magazine.

This post is great!  Thank you very much for the photos and the copy of the article by Steven Dick - pretty much pins these knives to the 1985-'86 gap in our database.  Also makes me wonder what the 5170 number was about, as the knives are identified in the article by their regular #s.

I have been a heavy knife user before I started collecting and it was very good to read Mr.. Dick's comments about sharpening and cutting up a deer with one of the big 44Bs.

I am very appreciative that you have contributed this extra depth on the Button locks. Or "Bolster locking pin folders" according to the article title.

No sooner say, "Never saw that knife" than up pops one.  Attached image shows one of the big 44B knives in brown staminawood with incised queen shield.I cannot read all of the tang stamp, but it is sometime in the 1990s - probably close to the smaller versions in 1993-1994.  This knife has been on Ebay and is getting a lot of interest.

Just saw a little slant bolster Copperhead sized knife in this series on Ebay -- first one I could read the model number. It sold for $65 plus shipping.  .

So the small slant bolster button lock is #5175, and the large one is 5170.  Thanks to submission of old article above, it is clear the slant bolster/ black staminawood models were introduced in 1985 and ran for only two years before they were switched into chip bark and given the 41B and 44B models (That were offered for 14 years.)   Usually see the big ones in both versions, it seems.  Large folding hunters were more popular than the smaller knives.  I like the smaller ones - would handle butchering tasks adequately and are much nicer to carry.  And they are much harder to come by, based on my involvement over the pat 8 years. .. 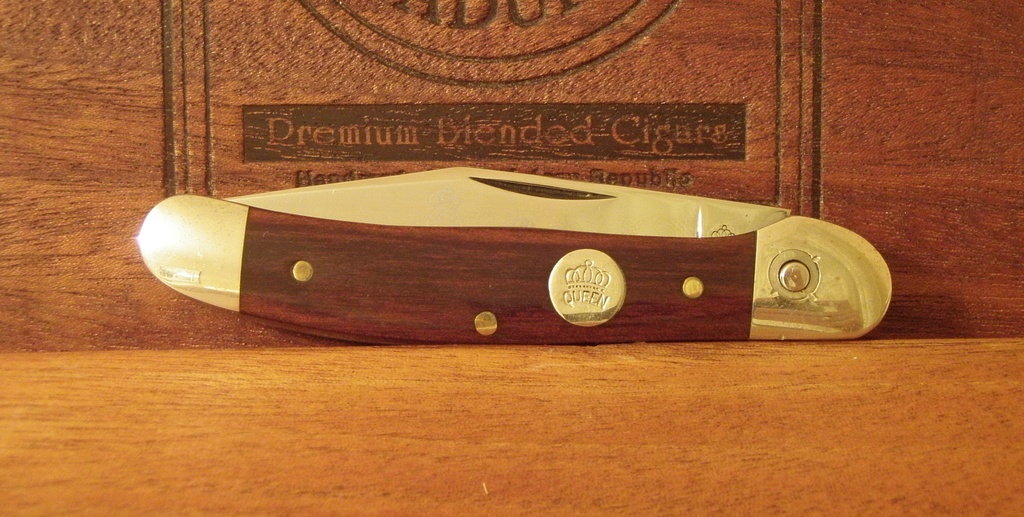 I'd purchased it's bigger brother .. the folding hunter version .. some years earlier & then gave it to my brother. He's an avid sportsman & uses it hard. Has never complained. Anyway .. I did like it enough that I purchased the smaller copperlock version (pictured above) for myself. It's a sweet little knife !!!

And, Dan .. thanks for posting this .. quite a few folks are unaware of Queen's buttonlocks.

I would love to find one of these

D Ale, Thanks for your contribution ..  Especially in adding the comment about your brother's hard use and the knife's continued performance.  I and others have wondered about the strength of this lock - but it must be OK; Rome Rushing's review article and yours are consistent - these knives hold up well. If they didn't they wouldn't have sold for 16 years (including the earliest 5170, 5175 models)- That is a longer run than the very nice and heavy-built Hawk Series of the '80s.

Still surprises me how hard it is to get a small chip bark 41B.  YES IMO these are typical Queen- very functional and definitely collectible.

Permalink Reply by Jon on December 18, 2015 at 15:24
Here is one of 3 "new in the box" button locks i bought this week. The other two are still in route to me. The knife was in the original plastic that says "button lock" with arrow on it. I hope you can see the pic of the plastic. The year of this one is 1992 per the blade.
Attachments: