It was about 3/16ths inch short and so started checking more knowledgeable guys, I learned  that

1. Queen has no record of putting shields on knives until much later in the late 80s with Case classics and other SFOs - adding a capability for the Schatt & Morgan reproductions;

2. Queen rarely if ever tang-stamped secondary blades in the 1970s;.

3. The shorter frame, jigged bone style, and shield all look MUCH more like a Shrade slim trapper;.

4. In the 70s Queen would sometimes wholesale sell left over parts (not stopping in the 1980s);

5.  Not to call them counterfeit, some people in the past have used these parts to finish up knives or make repairs.  The most common have been some Queen City stamps in newly made knives.

Both reviewers were consistent and clear that I had bought a knife that was "Not Right," suggesting I return it.  It was not a lot of money ($35) and for now I am keeping it right in front of me as an antidote to hubris. Always a lot to learn when buying older knives.   Hope you avoid this blunder. Some pictures attached.

As much as I hate reading that someone paid for something that was not what they expected, I also love reading these stories because it helps me grow in knowledge and experience.  Sorry to hear the knife wasn't as described Dan.

Permalink Reply by Rick Hooper on September 26, 2015 at 21:40
Make a great EDC, but not collectable as a authentic Q76! We had a couple of knife repairmen , who made these Frankenstein repurposed. These as users, both of them are gone and many of their such as that is still floating around! $15 tops, ask for a refund!

For sure it is not a collector - its a lesson.  I doubt the seller knew and if returned it will just sell again to some other dweeb.  I am keeping it right up where I can see it regularly as a reminder.  This post should make it harder for my descendants to misrepresent it when they eventually try to dispose of my stuff

Thanks to Rick Hooper in saying there are other "Frankensteins" out there.  Not common, but keep your eyes open!

By any chance did the Ebay listing have a red background?

No, Not a large volume red background seller. I have bought red several times successfully, but I watch carefully for EDC  in his photos. My purchase was from a person  in Tennessee and I have no reason to think they were deceptive  -  I tricked myself, assuming SFO rather than "Frankenstein". - like Carl said, one more step in trying to reduce my areas of ignorance.

IMO there are MANY misrepresented Queen knives on Ebay -- and almost all the "mistakes" claim "old and rare" or use year on the tang stamp as if it was a model number. Very few errors in the favor  of the buyer. It is one of the main reasons I have been so engaged in the historical document project  - a buyer or seller can check pretty efficiently to get much closer to accurate information. It is always buyer beware.  I have had good luck with returns on Ebay but it is also why I like best my  occasional trips to live shows.

Permalink Reply by Rick Hooper on September 28, 2015 at 12:41
Don, I believe a collector, who collects a certain pattern for one brand, becomes limited in finding "new" acquisition to their pattern collection. When they find something different , they need to research known archives to verify validity. These knife repairman built these Frankinmessers , to fool collectors into a purchase. At the flea markets , a knife such as the forum topic usually comes with a long winded yarn or a short "factual" statement of BS.

It is rare that you would get tripped up on one and keeping it off the street,IMO, is a great idea.  This thread proves even the experts can get tripped up without the knife in their hands,  So my thoughts are, if it is a Queen and you have a question about it, engage the team here, review the archives they have so painstakingly have put together for us.  If you do run into one of these, post it here in this thread so we can all learn together.

HI Dan: i saw this knife on eBay and sent the picture to both Fred Fisher and David Clark. something did;t look right to me about it.  they both confirmed what you so succinctly summarized.

a few weeks back i bought a 19A with bone shields.  i thought i had a mistake from he factory, but Fred said most likely someone had a 19a and had it re-scaled with bone handles.  i keep it in front of me too!

Hey Duke!  Show us a pic of the lovely?

I like Jan's suggestion about identifying these made-up  knives. That's why I posted.  Thanks to Duke - proves you knew enough to check with the right guys and escaped the one I fell for -- but did get a re-handled 19A.  Still, I admit lots of fun. 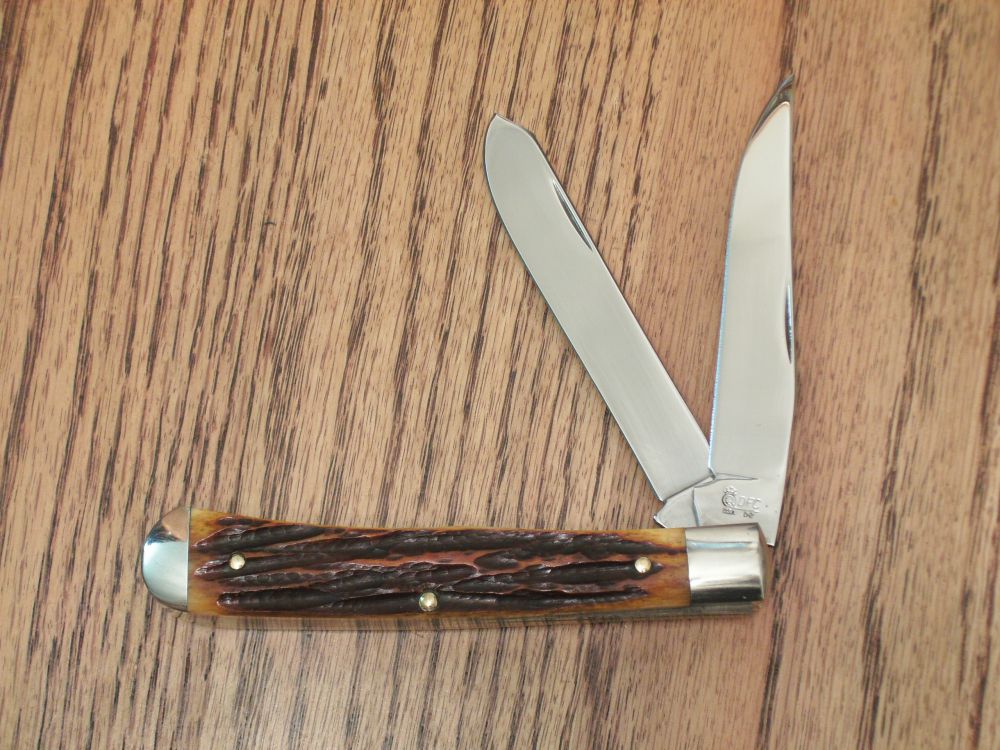 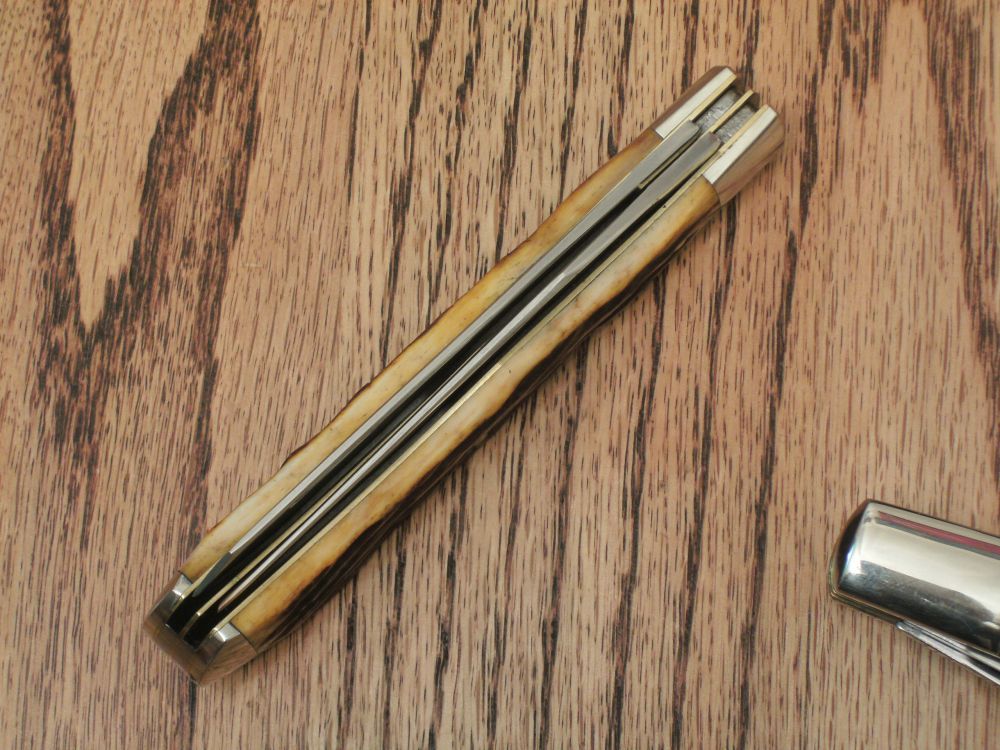 DFC is newest tang stamp from Queen and this knife looks pretty nice to me- like a #19 trapper, with some of the newest stag bone-- a tiny bit a different- darker than the amber carved stag bone they have used. Lots of different stuff coming out - lots to learn about.

KnifeMakerPaul S replied to ROBERT BETTIS's discussion How best to catagorize? in the group BOX FULL OF KNIVES
9 hours ago