I just finished having a "senior moment" and realized that I didn't know the difference between a "Discussion" and simply posting to the "Comment Wall".....maybe I still don't quite understand.

Never-the-less, I collect bayonets among many other things.....hehehe.

What do you think is the most unusual bayonet ever issued?

I'm going to vote for the 1941 Johnson "spike" bayonet, affectionately called a tent peg since it has no other practical use.

The 1941 Johnson rifle operates by way of a reciprocating barrel. The weight of a "normal" bayonet with a handle on it was just too much for the rifle's action to overcome.

So Melvin Johnson came up with a solution: a skeletonized bayonet.....bare bones, and noting extra. The result made it possible for the rifle to function but was otherwise useless in terms of the soldier having a knife with a cutting edge on it. The troops said it was good for nothing but a "tent peg"

Here is a picture showing a prototype above and the final issue below.

Alrighty then.....I have another "knife" which is sort of a sword. I got this blade when I was about 14 years old. The gentleman veteran from which I got the "Kriss" style knife and sheath, told me that the blade was used in a "Bolo Massacre" in the Philippines around the very early 1900's.....maybe 1906? I'm sure that history exists about such a massacre if U.S. troops were involved.

I will post a picture of it later when I dig it out of it's closet.

Mentioned in the discussion on knives for paratroopers, I have an old bayonet that I know very little about. As far as I know, it came from one of my uncles, who of my dad's brothers who we were closest to of the 8 siblings. I don't know that he carried it in combat, I'm guessing this may have been British army / colony issue 2nd world war. It's a folder, with a steel scabbard I guess you would call it, not a sheath, with a steel belt loop riveted to one side. The bayonet has wood, and folds though I'm not sure if it could practically fold while mounted on a rifle, or what rifle it was carried on. Possibly a Lee Enfield 303.

Looking at it now, and others, maybe I should polish it up a bit and make it more presentable. It's been a while since I took it out of the "treasure box" of family hand me downs 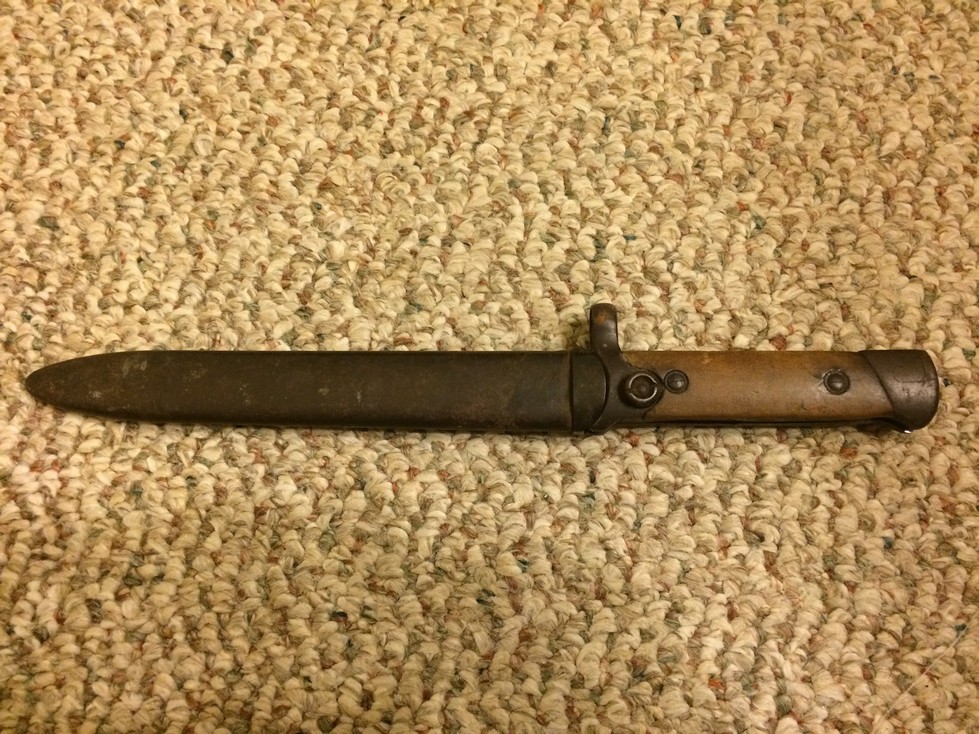 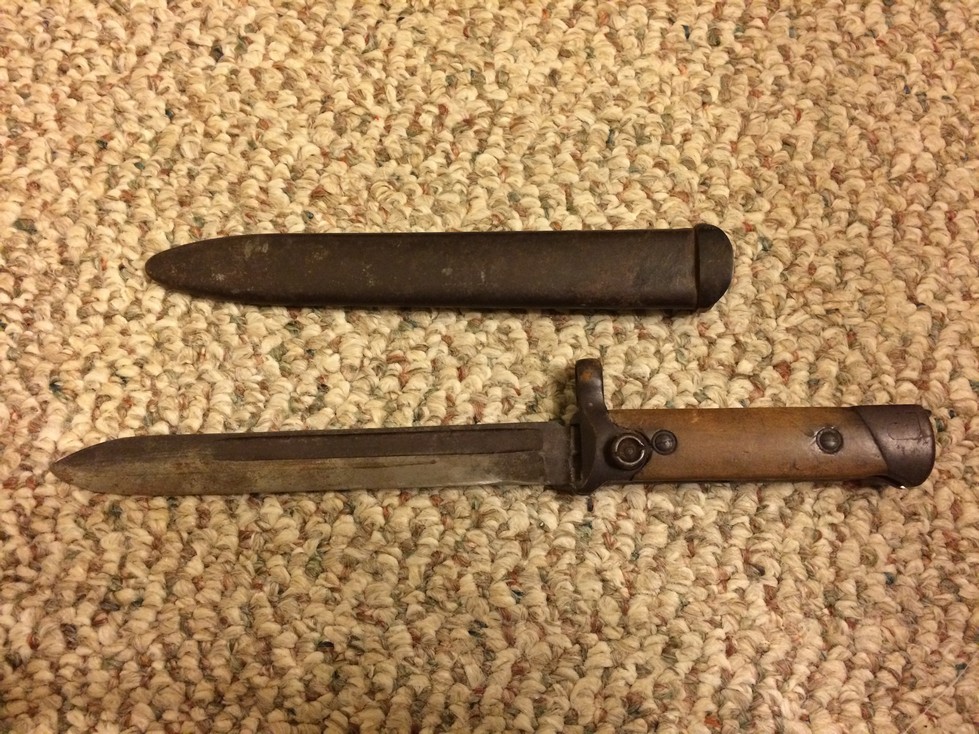 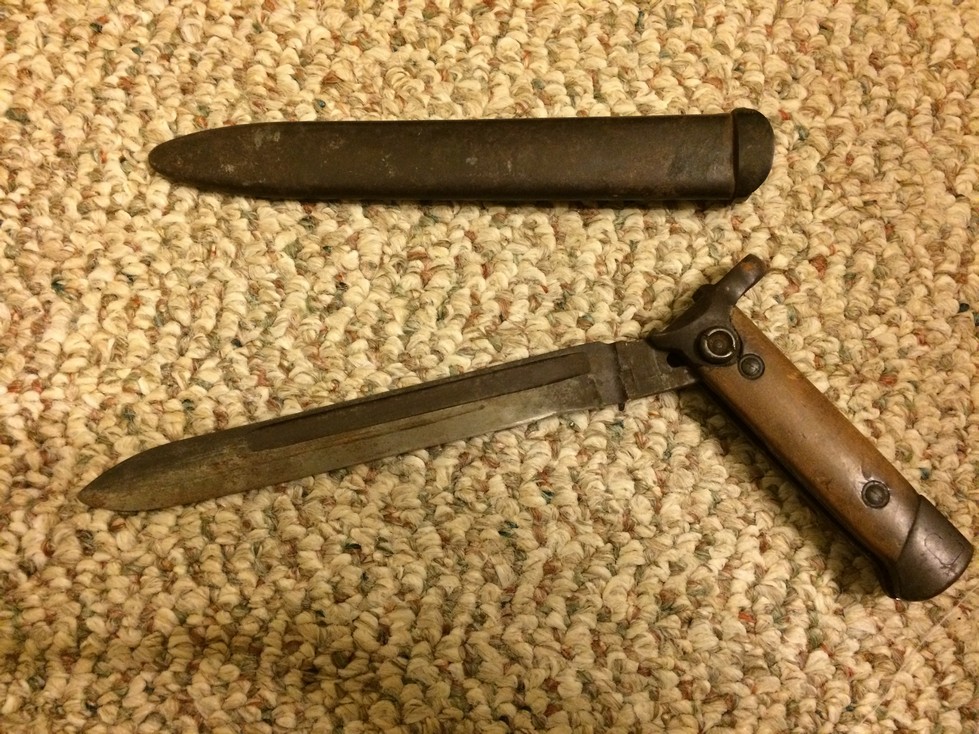 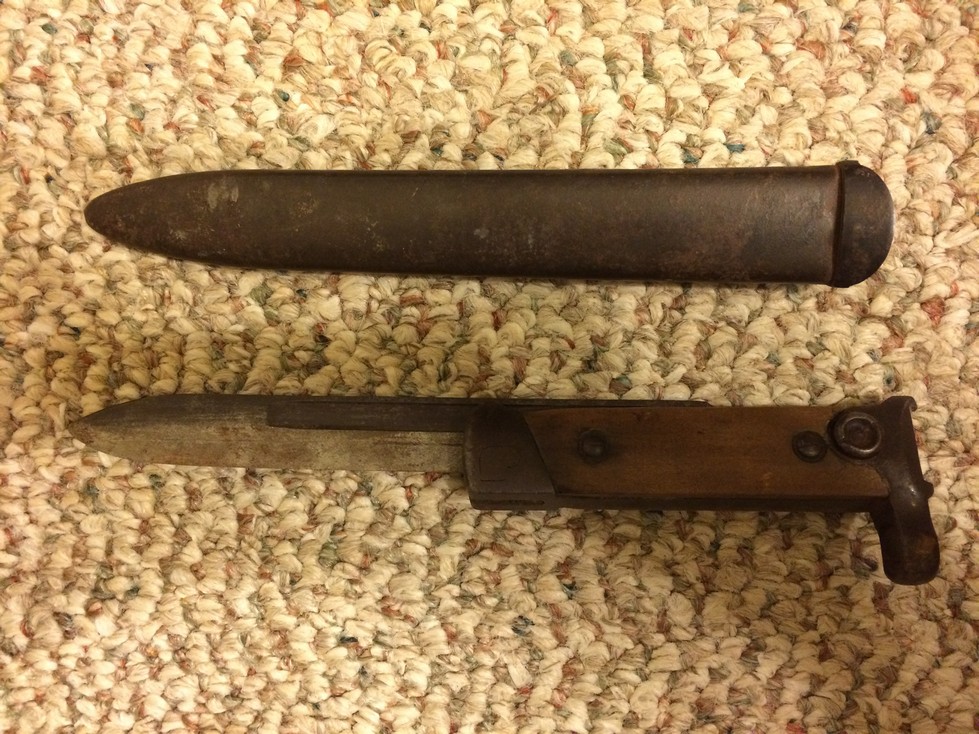 What you have is the folding bayonet for an Italian Carcano. It fits the 1938 Mannlicher – Carcano Infantry Rifle. This bayonet saw limited use in Italy and Finland. Original ones are rare and reproductions can be bought from Atlanta Cutlery for about $89.95 or so.

I was lucky enough to find an original for my 1938 Carcano but I had to look for awhile. There is plenty of information on this "Knife/Bayonet" on the internet.

So I wonder then if the origin of this hand-me-down has been misunderstood along the way before I got it. Or I got the story all wrong. I need to ask my mom what she knows of it.

Interesting comment from the link you posted, by someone who bought a replica bayonet that it cost almost as much as his rifle. I did a quick search and found they don't sell for a lot - and gunbroker has one of these bayonets for sale right now with minimum starting bid $234

I spoke to my mom via Skype today, still in South Africa. She knew the history of the bayonet. My dad was the youngest of 8, three sisters, 5 boys. One of the older brothers, Eian, was in the second world war with one of the British colonial units - (likely Rhodesia Regiment) and ended up as a POW. Somehow when he was released he managed to get his hands on the bayonet and took it home with him.

At some point after he was home, he gave it to one of the middle brothers, Donald, who ended up being the uncle who lived physically closest to my immediate family so we had the closest bond. At some point, he gave the bayonet to me.

Rhodesia Regiment was one of the two that I was in during my time in the army. Rhodesian African Rifles was the other - also known through many of the conflicts the British army was involved in and called on colonies to help with forces. 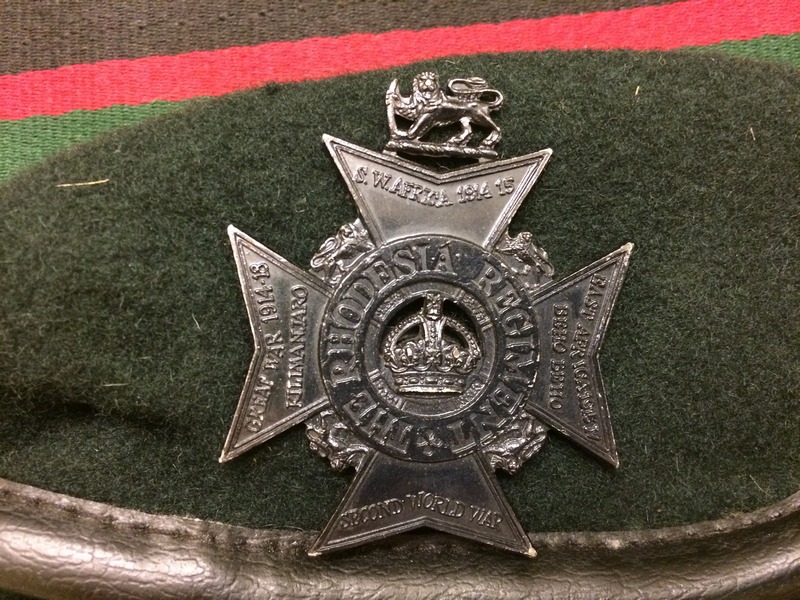 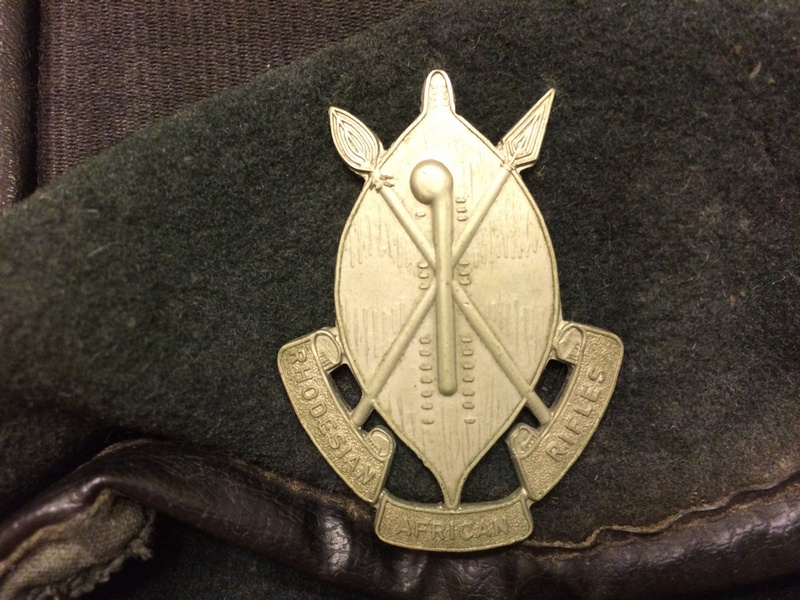 WOW.....what a great piece of family history! The story was there all along just waiting for someone to ask to hear it. How fortunate that you still have your mom who remembers. In retrospect I wish I had asked my Dad for more information about his time in the Navy Seabees. There are so many things I would like to know about the two knives he brought home. Also I wish I knew more about where and how my Uncle Raymond acquired the RAD Hewer and several other German knives which included a set of matched swords that he took from over the fireplace mantle of a bombed farmhouse. If I remember correctly, Uncle Raymond was in a "Head Quarters" company and let it be known to his fellow soldiers that he wanted to collect all the "war trophies" that he could get his hands on. He shipped home uniforms, helmets, guns, knives, silverware, dishes, framed pictures, etc. etc. "the spoils of war" I suppose.

The lesson to be learned is that we need to ask our older relatives about their past experiences and write it down. If they served in the armed forces there is a lot to find out, while they are still living.

I forgot to say - my uncle was a POW in Italy of all places, so the fact that he came home with an Italian bayonet makes some sense. What I find interesting is how he actually got his hands on it as a POW. Was there mass looting when they were liberated? Maybe ... unfortunately, he was older than my dad, who was three days short of his 85th birthday last month and that uncle is long gone so no way I can ever ask him.