Over half a century ago the United States Air Force was America's primary nuclear deterrent. This was accomplished by its long range bomber aircraft operated by the Strategic Air Command, the B-36, the B-47 and later on the B-52. ICBMs came along even later. To maintain razor sharp proficiency in the nuclear mission long range training missions were an daily occurrence and took airmen over every corner of the world. The Air Force became interested in refining its survival kits and equipment, particularly for arctic and alpine regions, as the fastest way to the targets in the Soviet Union was often over the polar route. Training missions sometimes turned into real life survival events. 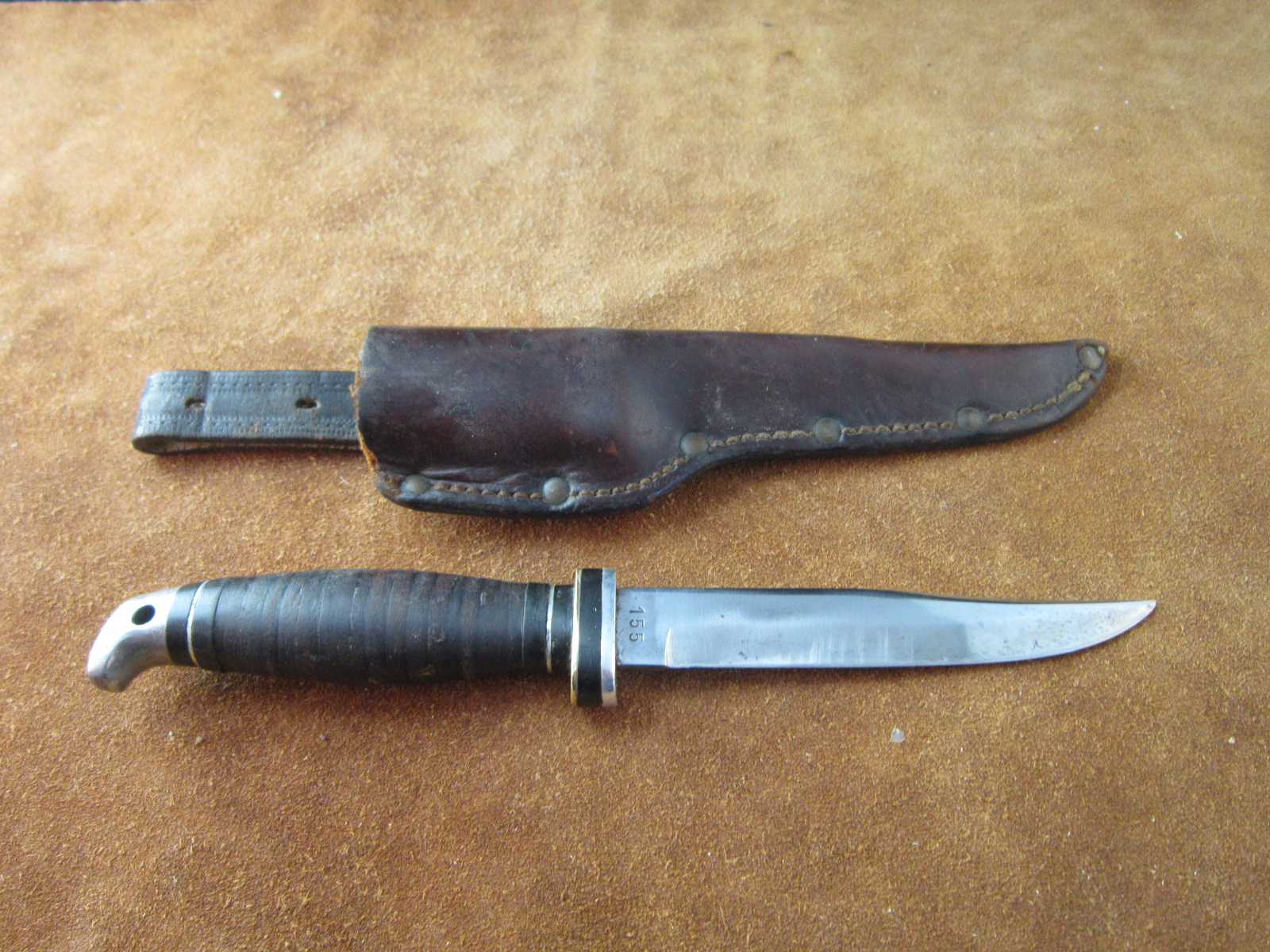 In the late 1940's, General Curtis LeMay, the head of the Strategic Air Command (SAC), authorized the creation of a survival kit for the crews of the long range bombers. Requirements were to be an effective tool for survival in the wild, with the ability to perform a number of functions to include field dressing and cleaning fish. As part of that effort the Air Force in the early 1950s adopted a sheath knife for use in the E-1 Survival Kit. It was intended to be a tool, not a weapon, and weight was a major consideration. That knife was the Boker 155, a blade that is little known today among blade collectors. Indeed, but for researcher/author Frank Trzaska's efforts the history of this knife would likely have remained lost in the mists of time. In 2002 Frank wrote an article published in Knife World which finally revealed the identity of this little knife. The Boker 155 had never before appeared in any of the major military blade books.

The Boker had an overall length of 8 3/4", a 4 1/2" blade, a stacked leather handle, and aluminum guard and pommel. It was carried in a unique pouch or tube shaped leather sheath. The birds head shaped pommel had a hole drilled through it to accommodate a thong to help the user avoid losing it.

Both the knife and the sheath are free of any USAF or other military property markings. This has, no doubt, led to its anonymity among collectors. The left ricasso is simply marked "Boker U.S.A" and the right ricasso marked "155", the Boker model number. 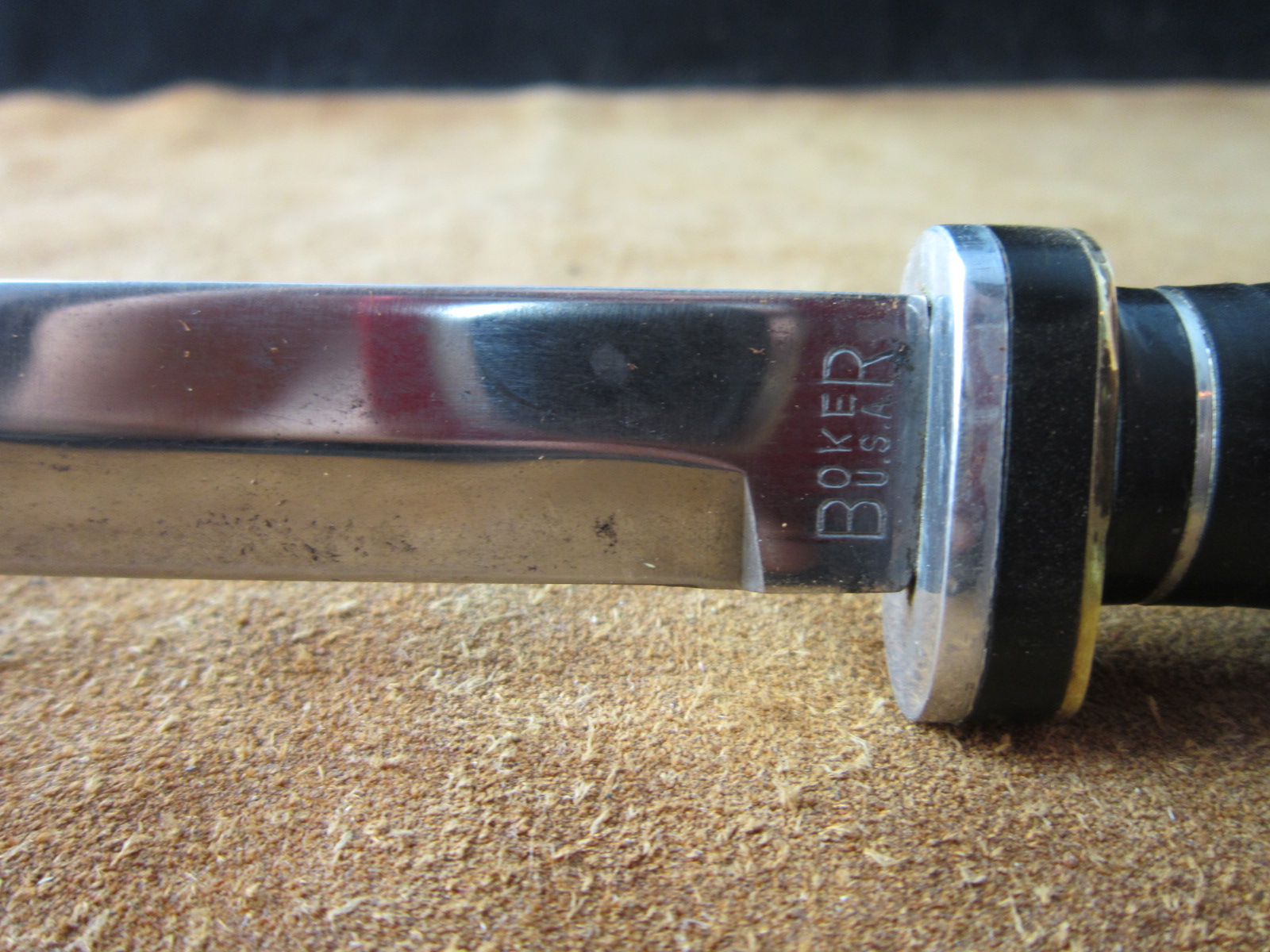 Frank Trzaska relates how several knife models were evaluated for this role, including the famous Randall Model 14. All were rejected in favor of the little Boker. Some 300 of the Bokers were tested in the early 1950s at the USAF Survival School located at Stead AFB in Nevada.

Total production numbers for the Boker 155 USAF Survival Knife are unknown. Other survival knives came along later which are better known and were produced in far greater numbers, including the Pilot Survival Knife and the 6" and 5" versions of the Jet Pilot Knife. Today, the little Boker remains a rarely seen and even more rarely recognized US military knife.

The stories this knife could tell...

This design is very similar to other knives made during that period manufactured by Case and Western sometimes called Finn Knives because of the similarities to Finnish knives called Puukkos.

WOW...all new to me!  What a great bit of knowledge there and yes.....if only it could talk

Where's the best spot to post pics of older Case on here?