Florida Knife Maker....
I know exactly what named popped into your head.
What you most likely don't know is that Florida has produced more than just one maker that is sought after by collectors.
I had an opportunity today to put my hands on not one but two of those makers knives. Mind you these are early works and at least one of these makers was a bit ahead of thier time in creating sharp objects.

Many of the custom makers today specialize in either fixed or folders but usually not both. Our first Florida knife maker just specialized in knives.

James "Hoot" Gibson retired from Continental Can Company where he had the opportunity to work with metals in their machine shop and lives in Dead Lake, Florida. Here is what he had to say about himself and his knives
I have been making knives since 1961. I started making knives because I was not happy with the factory knives I was using, I was working for the United Steel Workers , ( 30 ) years. We had a man that was trained in Germany
as a tool & die maker who was a wonder! I became good friends with him, and he showed me the proper way to temper steel. All my knives at this time were oil hardening, as were the springs for the folders.
The first knives I made were for myself & friends that I deer hunted with, about 6 guys, they were large folding lockbacks. All the knives from 1961 to about 1975, I gave away to the people I worked with. Don't know how many! Maybe about 800-1000, that were good using knives, nothing fancy.
I thing the first knife I sold was in 1975 , $15, When I retired from the USW in 1988 I was selling them for about $75! I still get 1 back every and now and then from those early days to put in a new blade, handles are still good.
Almost all the blades I make now, are AST-34, or 440C. I understand that this was written in the later part of his career and that he is no longer with us. Run a google search and look at some of his knives, he created some beauties. 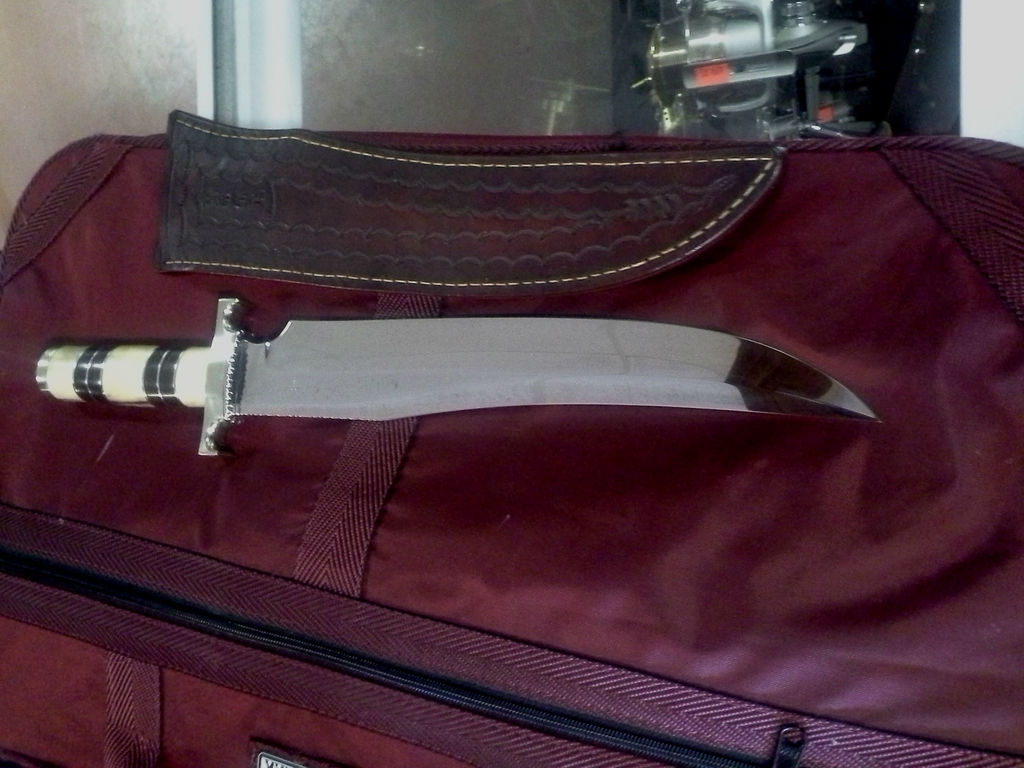 Most of the knives are traditional old fashion like me.

"Hoot" became a member of the Knifemakers' Guild in 1990

The next knife maker Colin Cox, began his career here in Florida and his early tang stamps are a source of pride for his collectors. Here is how he describes his transition to knife making.

In my youth, I was very interested in art, in knives, and in working with my hands. I had no idea that I would one day combine these three interests into a profession. I had training in the U.S. Marine Corps between 1962-1970 in the function and use of weapons and gained much experience in steel work in a later profession. The events leading up to my knife making career all began in the late 1970s. A gentleman from the west coast of Florida called Cowboy got me interested in knife trading and in doing knife customizing. I began putting custom handles on knives and doing file work on the spine and blade of knives for friends along with knife repair work. I frequently visited the Randall Knife shop to obtain handle materials for some of my knives. One day when I was in the shop, Mr. Bo Randall approached me and asked if I would be interested in repairing some of the knives in their museum. I willingly accepted. I continued to do repair work for Bo Randall until his death in the late 1980s and am still referred by Gary Randall for any repair work that they do not do in their shop. I continued to do repair work and at the same time began reading every book I could find about making knives. I went to De Land, Florida, where a friend, Paul Sheffield, had a knife supply business. Paul ground a blade as I looked on. I then went home and began making my own knives. That was in 1981, and I have been grinding blades every since. In 1984 I left the elevator industry and became a full-time knife maker. I also became a member of the Knifemakers' Guild that year. In 1996 my family and I left Florida moving to the Midwest. I quickly set up my shop in Raymore, Missouri, a small town about 20 miles south of Kansas City where I reside today. I am the type of knife maker that does not like to limit myself to just a few designs because variety is what keeps knife making interesting and challenging. I specialize in making fighters, survivals, bowies, hunters, along with other functional knives.

The logo markings on the blades I make has changed over the years. My earliest knives were cold stamped. Some included my initials--C. J. Cox and others had Colin Cox with some being serial numbered and some with FL. This mark was used up until the mid 1980s when I changed to a professional logo with Colin Cox etched in two lines and Apopka, Florida, appearing in smaller letters beneath my name. In 1997 the appearance of the name Colin Cox remained the same, but the city and state were changed to Raymore, Missouri. I still use serial numbers on special edition knives, one-of-a kind pieces or upon request. I enjoy making knives and am making more knives now than ever before. I only attend a few of the major shows because I am kept so busy selling knives locally and on the Internet. Because of my love for making knives, I plan to continue making knives for a long time. 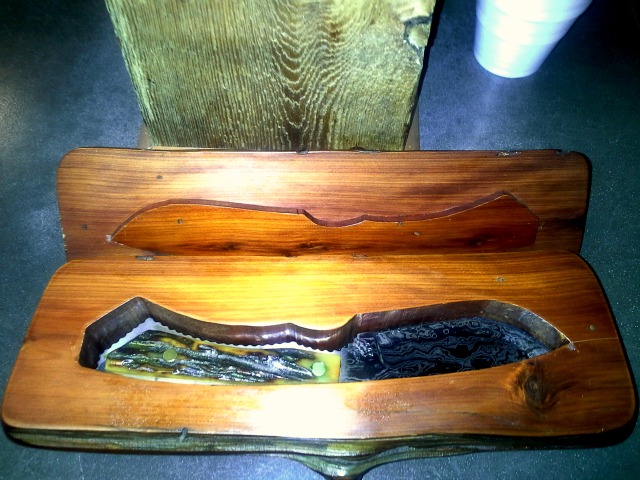 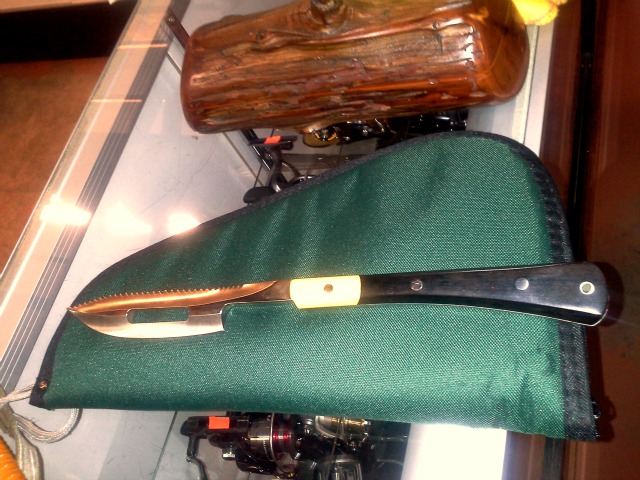 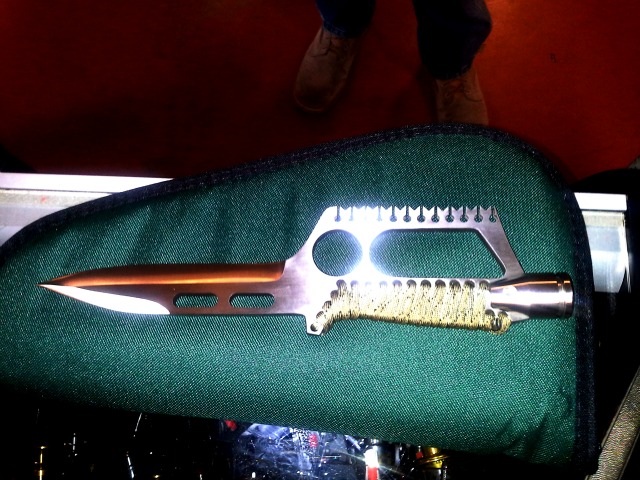 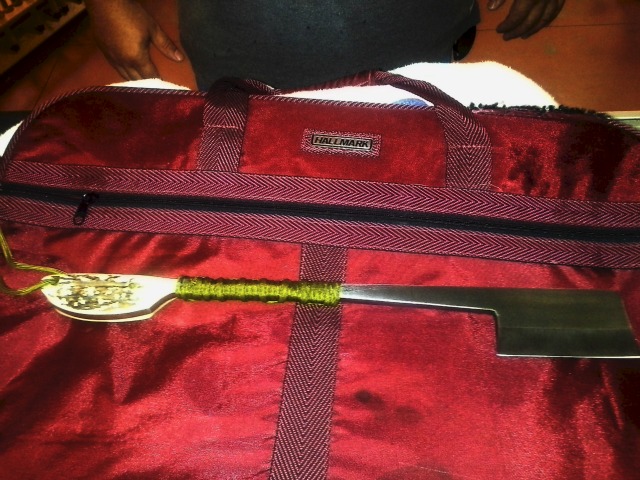 Now we all know I am not a photographer and these were the best I could get under florescent lights but I could not resist the temptation of bringing you more Florida knife makers.

So have you ever looked to see what knife makers are in your own state?

Thanks for the stories and knives out of Florida. We lost one of our Louisiana knife makers, Bob Dozier to Mr. AG. Russell and Arkansaw.

Dozier has influenced many great knife companies.  I just watched a video on his KaBar

I think TX has the most

Well one in particular is Tony Martin who lives in Missouri. He operated Arcadia Valley Forge for many years and is a personal friend. I have 3 of the knives he made in my collection. He is retired now, seldom makes knives much anymore but is still in good health and active.

Permalink Reply by Steven Matthew on December 30, 2012 at 18:06
Funny thing, I see more custom made knives around my parts then I see mass produced. The biggest Case dealer, in my town, carries around 5 or more "local made" knife companys.

Steven, if you get in there anytime soon, take some pics

Lars Ray left a comment for DAVID MUSGROVE
16 hours ago

Lars Ray left a comment for Mike Keiley
16 hours ago

Jan Carter left a comment for Mike Keiley
18 hours ago

Jan Carter left a comment for DAVID MUSGROVE
18 hours ago

KnifeMakerSergi C. Heideman posted a status
18 hours ago
0 Comments 1 Like