Batoning with a folding knife

I've done my fair share of batoning with fixed blade knives.  My question is have any of you batoned  with a folder?   If so what kind of folder and how large and thick was the blade?   And what were you batoning?  For instance would you attempt to baton through an 2 inch (51 cm) Sapling with a Standard Canoe that has a 2.5 inch (6.35 cm)  440A Stainless blade?   How about a 1095 CV blade?

What do you think that would do to the pivot point and/or back spring?

I have never batoned with a knife before I have always brought a hatchet or axe with me. Batoning is something I don't under stand. Where do you get this nice cut wood to baton without an axe or hatchet?

A hatchet is nice, if you brought one along.  For backpackers or hunters or minimalists, a knife can take the place of a hatchet, with a baton.  You can cut down (baton) standing dead saplings and baton to length.  You're not going to easily baton through a 6" diameter log (across the grain), and you'll need a 7"+ blade to split it from the ends.  A "Pocket Chain Saw" will work for the bigger logs (fallen dead trees) - to cut them to length, and it takes up very little room in a pack or pocket.  Once you have some 3" dia. pieces for the fire the bigger stuff can be thrown on without batoning/splitting when the fire gets going well.  Another advantage to batoning is that while it is difficult to get logs to stand up to split with a hatchet, especially if you used a hatchet to cut them to length, a knife holds the log up while you baton through the ends - less likely to miss and cut your leg or foot (hatchet).  Yes, you can split logs with a hatchet by laying the logs down and splitting through the sides - if you can find an old stump so your hatchet doesn't hit rocks and dirt, but sometimes, on the bigger stuff, a hatchet won't go through in one whack, and you tend to get it stuck.  Batoning with a knife usually avoids this.

That brings me to something I don't understand.  All the "bushcraft" knives have under 5" blades.  That means that you can't split anything over about 2" diameter logs, and have enough blade that sticks out on the other side of the log from the handle to beat on with a baton.  Personally, I wouldn't go in the woods for a few days with anything less than a 6" blade, and the bigger, the better - up to a point.  When you get up to about a 10" bladed knife, you almost have a "hatchet".

As an aside, I think that you might be able to baton with a "tactical" folder; a robust knife, but trappers, canoes, etc. have too thin blade steel to take batoning, in my opinion.  And, you run into the same blade length problem as the "bushcrafters" - you can split kindling, but bigger stock will be a problem. 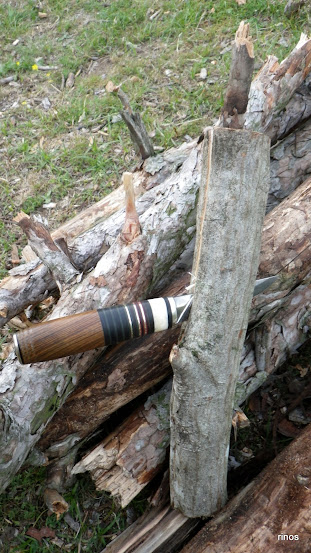 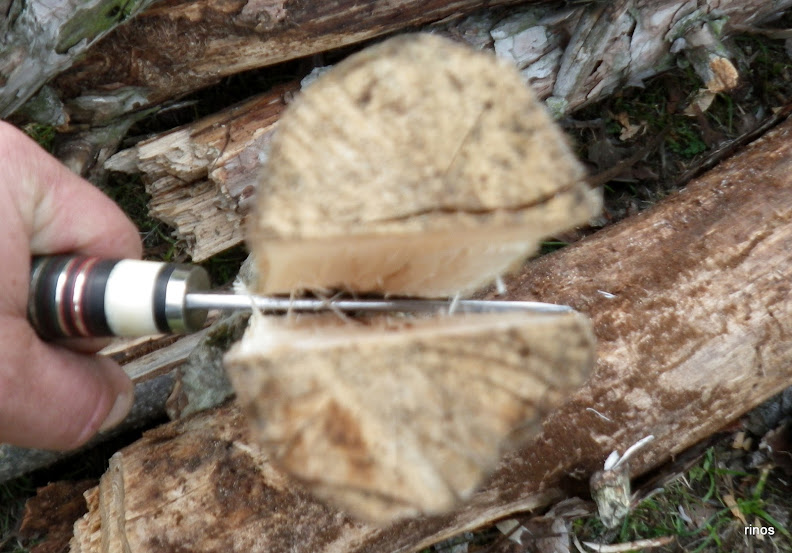 i used very few times knife for batoning,mainly just to test the knife,hatchet or axe are more suited for the job,even pocket saw (folding or retractable) is better choice,very light and more packable then hatchet 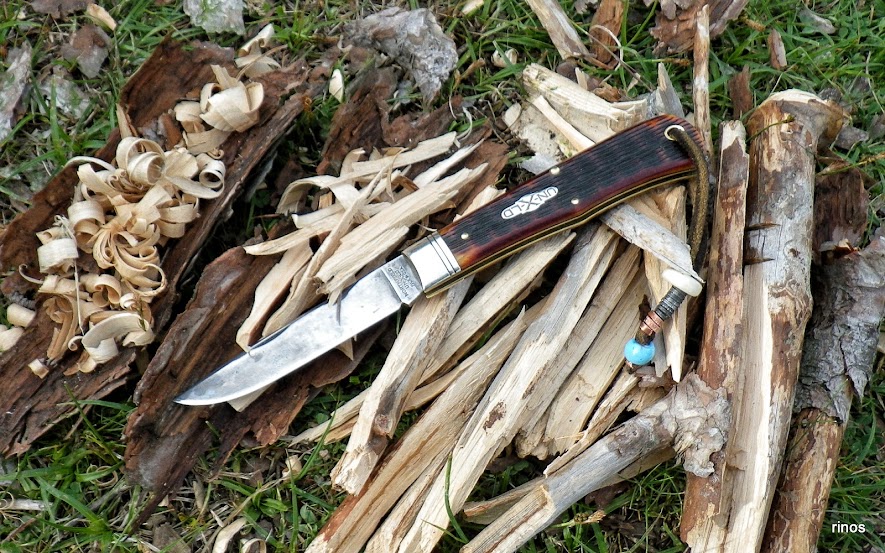 preparing kindling is easy with larger trapper,but that's most i would do with folder

I have used a CRKT M16Z to baton 2x4x36 in and 2x6x24 in boards in Afghanistan for firewood.  I was thankful for the AutoLAWKS™ automatic knife safety in addition to the liner lock.  It prevented the knife from closing accidentally.  It's a 3 in hollow ground tanto blade with 1/3 serration, AUS 8 steel, and 0.12 in thick.  I had access to a roofing hatchet and a regular size ax.  I just chose to see how tough this knife was.  I was pleased that I  was able to prove to several of my coworkers that it could be done with a folding knife.  This is one of the reasons why I use it as one of my EDC knives.

I have studied most of the old time Woods Craft writers and none of them talk about Batoning. They all say bring an Axe or Hatchet. If traveling in a group, the load can be distributed. With one carrying a tent or tarp and the other the hatchet. Among other things that can be distributed.

If you are set on Batoning, I can see some knives are more suited for the job than others. I sometimes carry a 15" knife that I'm sure would be great for the job. A small knife and it looks like you may have a chance of hitting your hand. A small knife seems more suitable for making kindling.

Splitting with with the grain can be done with almost anything with an edge that can be wedged in the wood.. I've split pine  using  paint scrapers and even metal ruler.  But cutting cross grain requires something better than a simple wedge.

Batoning can be fast an effective with a decent blade. It is done when you want a clean cut at an exact point.  If done correctly it requires less effort that whacking the branch with a hatchet.

My experience has been that it isn't the length of the blade but the distance from cutting edge to spine that actually determines what you can baton through. If you have a blade that is about 1.5 inches from spine to  you should be able t bring down a tree that is 4 inches in diameter even with a 4 inch blade.  You could probably do it with about 20-50 whacks; depending on how sharp your blade is and hard hard the wood.

You learn to baton when you don't have an axe or saw..  I just can't picture doing it to anything substantial with a small pocket knife.

And by the way, I tend to take down two inch saplings with the wood saw on my swiss army knife.

Great pictures, Rino.  A pocket folder should be excellent for making fuzz sticks and fine kindling.

You make an interesting point, Tobias, about blade width being important in batoning.  Assuming blade width is a function of the overall geometry of the outdoor or survival knife, the width should a great asset.  Suitable blade thickness helps, too.  A "cooks" knife is certainly wide enough, but probably too thin to take much of a beating.  I don't think an outdoor filet knife will be much use in batoning, either - long enough, but too thin and "springy".  On the other hand, you could probably put a crude edge with a file on a narrow, but thick,  piece of bar stock you find on an old junker rotting away in the woods and baton with that - which would allow one to keep his/her Randall or Dietmar Kressler in the sheath.  Hahahaha.

Tobias!  You may have hit on the best "folder" as a must have for the woods - a SwissTool.  It has that great saw that's on the SAK knives, all the blades/tools lock open, and while the standard and serrated blades aren't the best for batoning, they are good for skinning small game.  And, it is small enough so that it doesn't take up much space or weight.  You get pliers and screw drivers, too.  A big knife, hatchet or Granfors Bruks hunters axe would be nice to have for bigger jobs.

I agree, if you are going to baton, you need the right size knife with the right type grind on the blade. The right knife for the job is a must. As you said a filet knife would be close to useless but it's great for fileting fish.

The way to split a small log with a hatchet or tomahawk is not to start at the end as you would when batoning. The best way is to lay the log flat on the ground and start at one end and make your way to the other end the way you split rails. Your blade won't get stuck and the log will split a little at a time. You can even split the half log into a quarter log using the same method. I hope I have explain it correctly, so you can see what I mean.

Agreed Howard.  I think the blade spine needs to be at least an 1/8 inch (about 3 mm) and preferable closer  a 1/4 inch (6 mm) to lessen the chance of bending/breaking or getting pinned in the wood.  I think a flat grind works best but I've done quite a bit of batoning with my hollow ground Camillus Mk2 fighting knife.

I agree, if you are going to baton, you need the right size knife with the right type grind on the blade. The right knife for the job is a must. As you said a filet knife would be close to useless but it's great for fileting fish.

The way to split a small log with a hatchet or tomahawk is not to start at the end as you would when batoning. The best way is to lay the log flat on the ground and start at one end and make your way to the other end the way you split rails. Your blade won't get stuck and the log will split a little at a time. You can even split the half log into a quarter log using the same method. I hope I have explain it correctly, so you can see what I mean.

Dang, I would think a hollow ground blade would be to thin. I thought that batoning and other wood work was suited for the Sandi Grind. I thought that was why it was ground that way.

Paula Bartholomew is now a member of iKnife Collector
10 hours ago
Welcome Them!