The fishing was less than spectacular the week were there.  Now partly that has to do with my skill at angling but my fishing mates were also having a rough go at it.  (One of them came in first place Steelhead Trout competition a week before.  This was not based on his age but his catching the largest fish in the completion.  He is just 14.)

It started out pretty good. My first fish came about five minutes after dropping a line over the side of the boat.  A nice 7 inch blue gill.  Definitely worth keeping.  This was followed by a nine Black Bullhead Cat.   Now I know some would scream “keeper” for that as well, but it’s a nuisance fish in these parts.  My brother in law had a good laugh.  Thankfully I’m one of those folks who keep a fishing glove handy just for these occasions.  I felt the barbs through the gloves but they didn’t penetrate.

About five minutes later my brother in law hooked a musk turtle.  That was followed a few minutes with the second bullhead of the night!  Guess who was laughing now.

All told, we caught about 4 keepers the first night out.   Very disappointing.   The next few days  continued to go about the same.  We even switched lakes and still had some lousy fishing.  We blamed it on the weather.

We were catching plenty of Largemouth Bass but all were under the legal limit (14 inches) My largest was 12.  My wife got one at 13.  Most were between 8-11.  We were also hauling in quite a bit of blue gill and crappie but most were in the four inch range.  If the little fellas swallowed the hook then they were destined for the frying pan but most made it back in the water.  I think at the end of the week we might have caught about 30-40 fish that were keepers.  Most were caught by the two boys, my nephew and his 14 year old friend who won the steel head competition.

If we had kept the under limit bass that we caught the number would have easily doubled!  Hopefully next year will see more largemouth keepers! 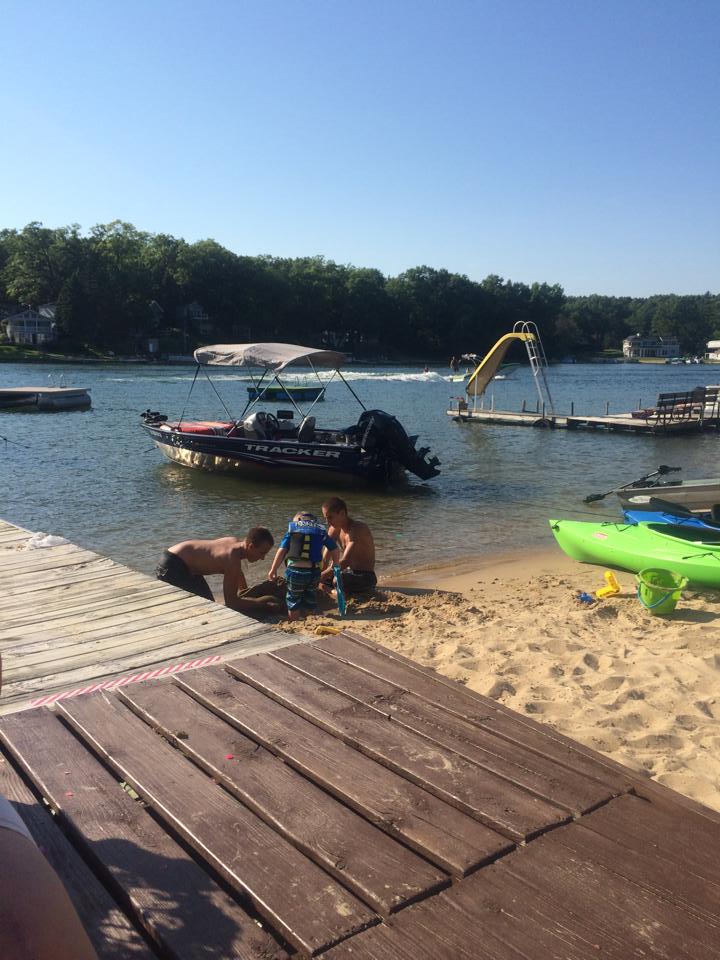 My brother in law's boat and three of my fishing mates. The little guy (my youngest nephew)  was our minnow guy.  He was also the guy who tossed back all the bass. The gentleman on the right won the steelhead competition a week earlier. The other gentleman is my other favorite nephew.

When I wasn’t fishing, I was hiking the nearby trails.  Unfortunately no one else was willing to tag along and as the trails were unmarked and unmapped I was able to explore them as much as I would’ve liked.  Still I came across a suitable maple for a staff.  From the leaves, I identified it as a sugar maple, which is a nice dense wood.  (Avoid Silver Maple the center is very soft and it makes for a louse staff!)  As I knew there were going to be times when I wasn’t going to be able to hike or fish, I brought a staff that I had cut last year to work on when I was just sitting at the cottage. 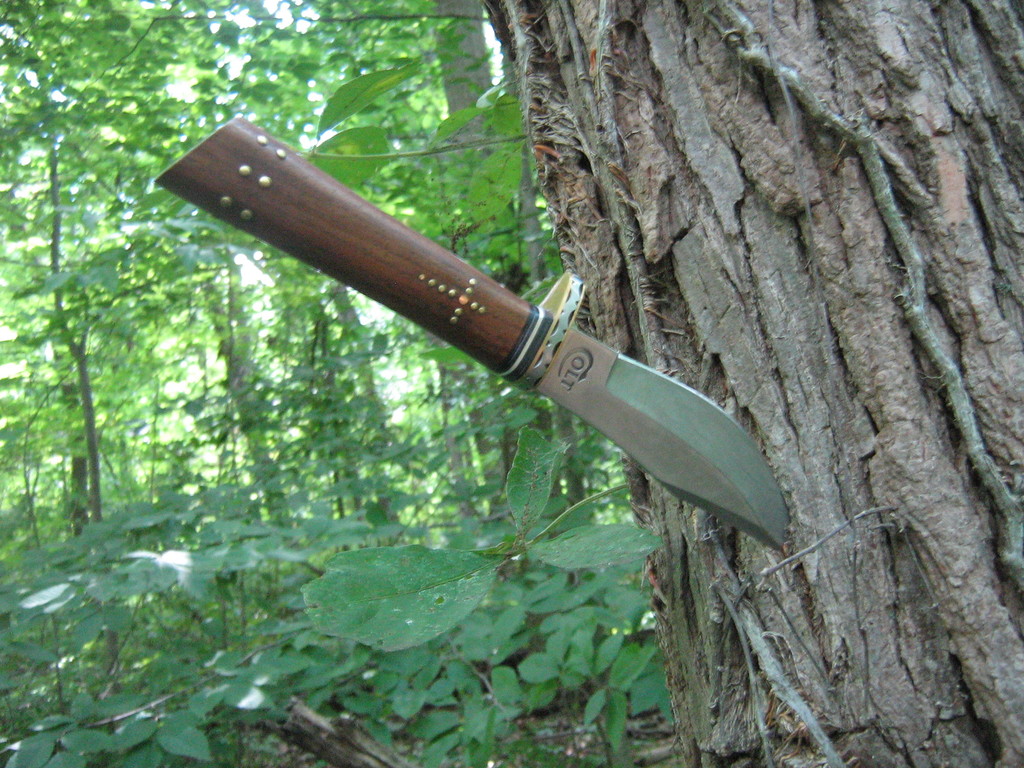 I took three knives in the woods with me (the Victorinox Outrider, a Rough Rider  Camp Knife, and Colt 407).  The Colt 407 could've been a tad sharper but was adequate for what I needed.  I put a better edge on it after the trip.  I was not overly impressed with the factory edge. 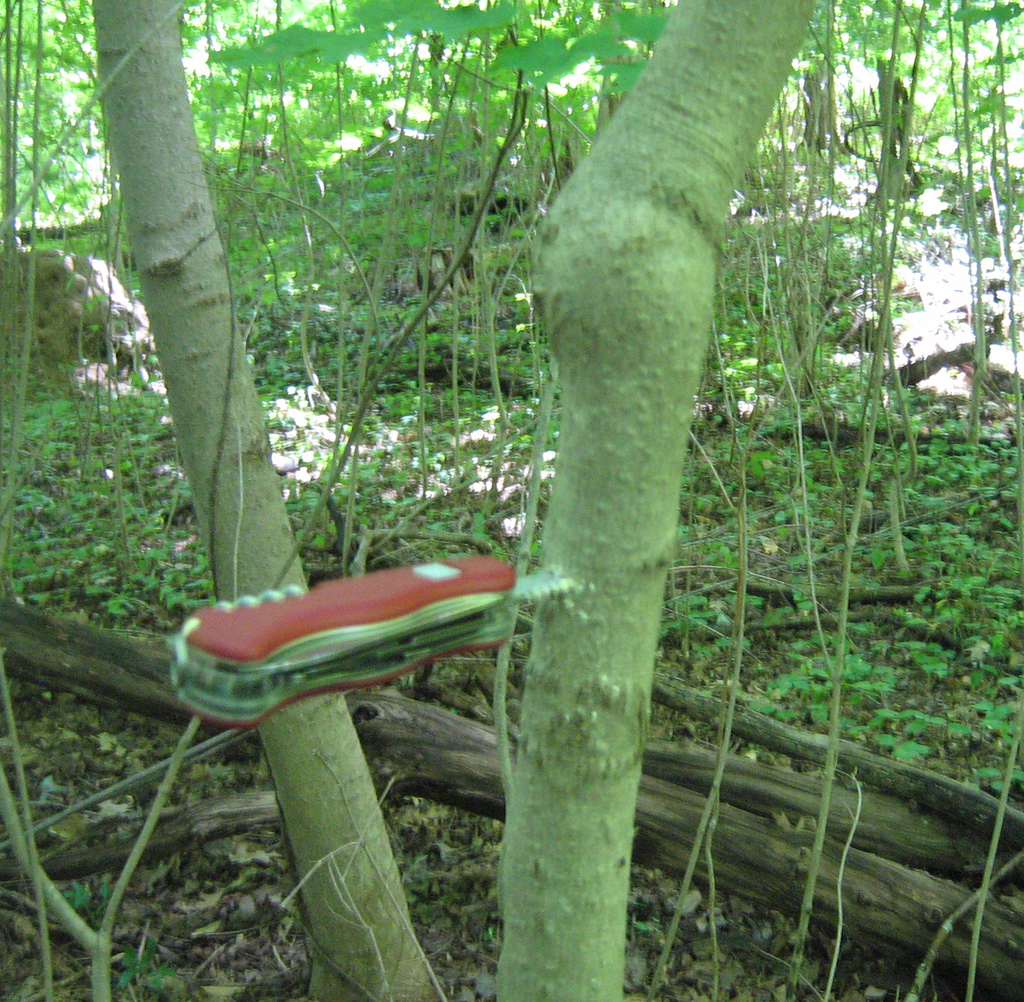 The Victorinox Outrider performed terrifically! It cut through this Sugar Maple sapling effortlessly.  It also proved to be the best knife when it came to stripping the bark later.  (I actually tested five knives while stripping the sapling. two fixed blades and three folders. More on that later.) 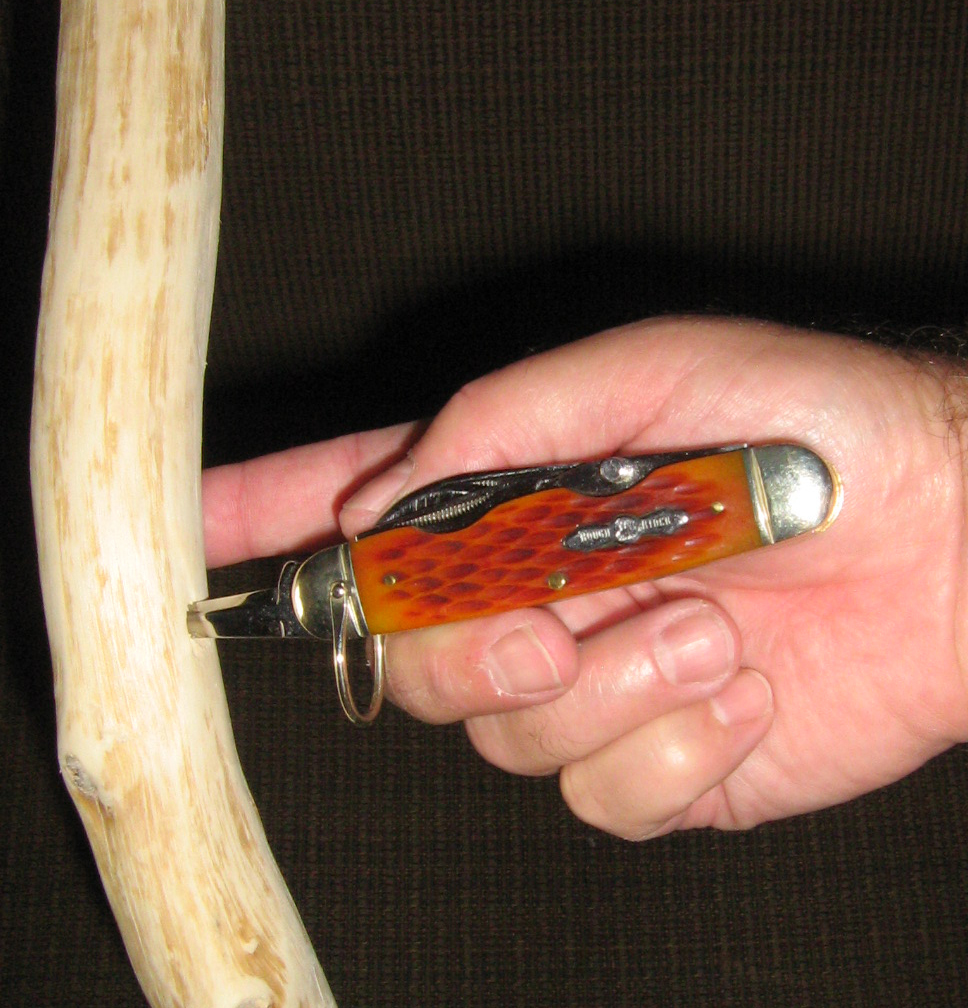 This is the staff I retrieved last year.  It is from a Sassafras Tree.  The hole was initially made with a small drill then enlarged with the reamer of my Rough Rider Camp knife.  The camp knife was used for other whittling needs on this staff and the recently acquired Sugar Maple staff.  I let the staffs dry out for a year before I start final sanding and finishing.

We also went to the bustling town of Dowagiac (doe-wah-jack) and visited the Dowagiac Area History Museum. It was actually quite impressive. Admission was free but they have a donation box.

If you fish, you’ve probably heard of James Heddon and the lures that bear his name.  Dowagiac is the town where the Heddon Lures were born.  Unfortunately the museum stressed the Round Oak Stove Company more but the information on the lures was pretty cool. 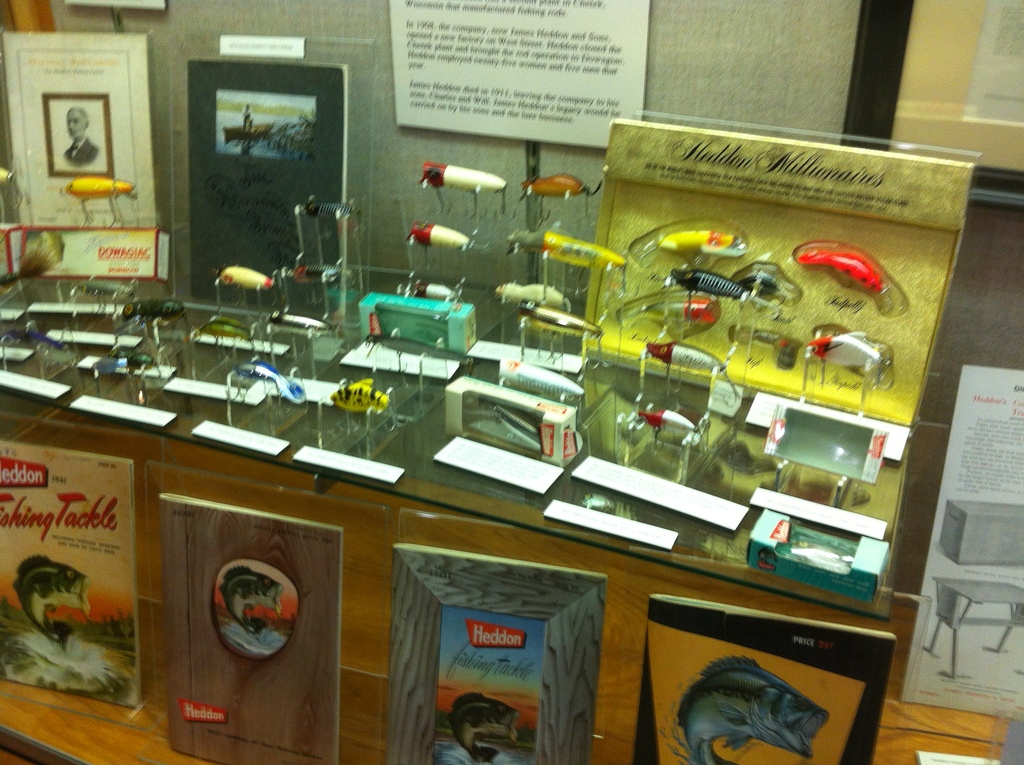 A display of Heddon Lures. 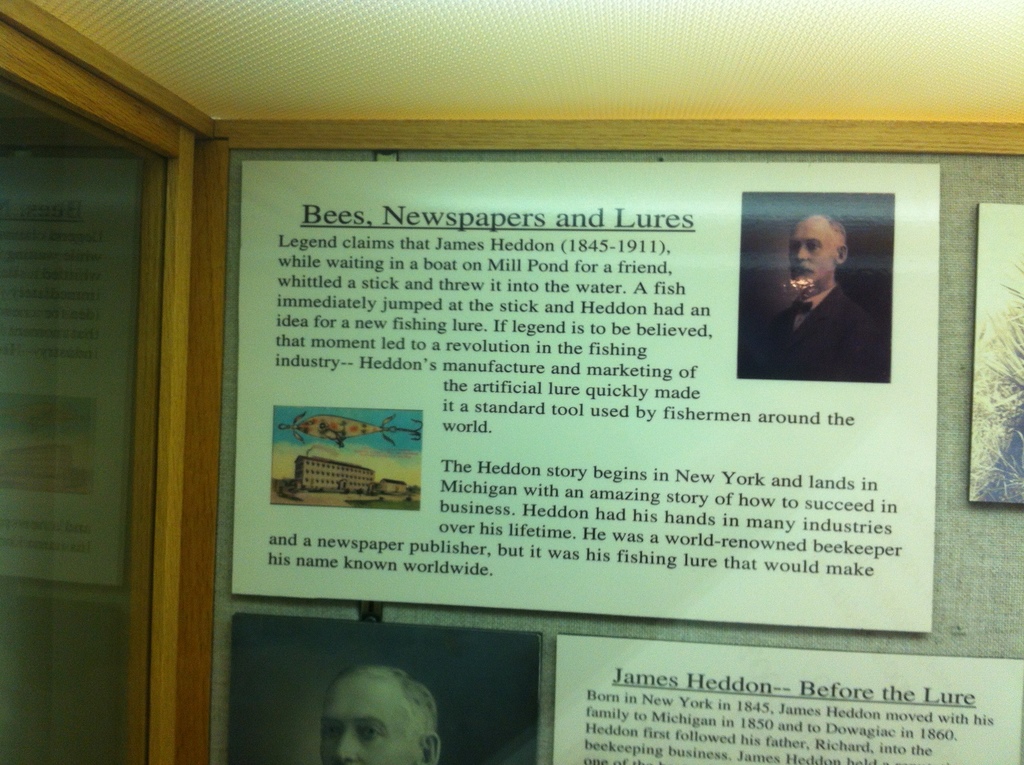 A little background (myth) about James Heddon and his company 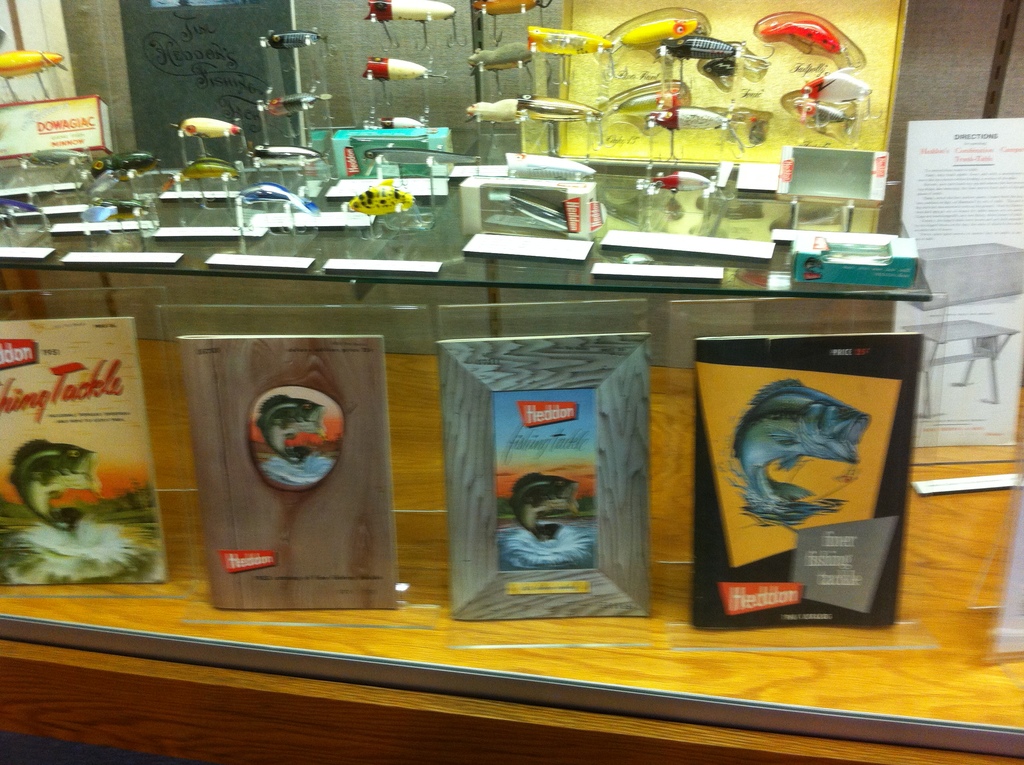 Also in Dowagiac is the Woodfire Grill. It is an upscale Italian restaurant that serves some great meals.  Zeke's and a few other places are good eating as well.  There is also a nice little candy store with an old style soda bar for ice cream and floats!  Not really outdoors but good fun for the family members who need a distraction from fishing!

Those are great knives Tobias

While my fishing was sorely lacking my minnow trapping excelled. My nephew made a minnow trap out of 5 gallon water jug however it was tinted blue and the minnows were not interested in it.  Having brought several of the 3 liter Ice Mountain bottle I noticed that they were shaped like a minnow trap. So I took my knife, cut a hole in then the bottom tossed in a few sun chips and was catching minnows within minutes of putting the bottle in the lake.  Later we refined the trap by adding holes in the cap and attaching a line so we could just drop it from the pier.  If you’re looking for a cheap disposable minnow trap, I highly recommend the three liter  ice mountain jugs. 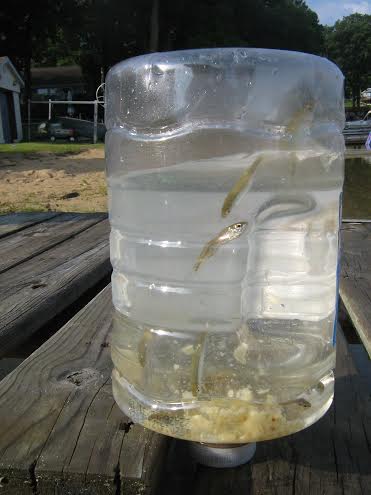 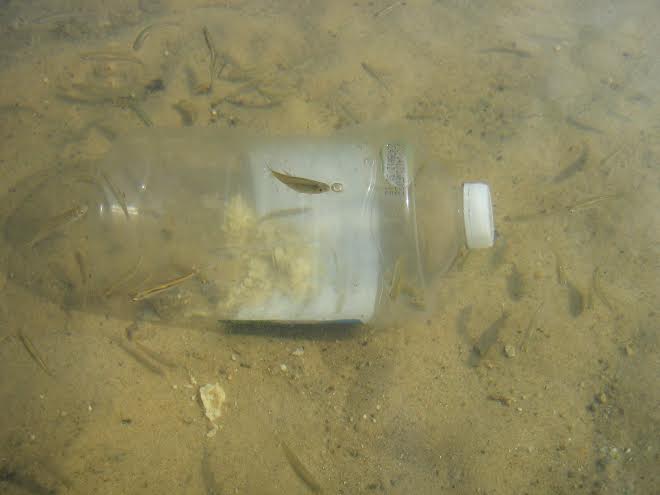 Using the ice mountain minnow traps we were able to catch a couple dozen minnows in about 5 minutes.

Tobias!  Good to have you back and this is a great write up!  Looks like you had fun and went fishing, not catching.  Thats ok, it gave you time to test out those knives.  Looking forward to seeing more of that!  Great ingenuity on the trap by the way!

Catching is a relative term.  Caught plenty of minnows and non-keepers.  The bass were mocking us.  every bass we caught was  between 9-13 inches and were just barely getting snagged on the lip so it was easy to release them.  14 inches was the legal limit.  I should've brought this knife along.

But alas, we were honest fisherman and abided by the the true legal limit of 14 inches.

Then there was the one that got away.  I was casting off the pier one morning with a spinner.  The water was crystal clear and about six feet deep. It was obvious nothing was there except minnows.  After about 20 or so casts, I see from the corner of my something shoot out from the under my brother in law's boat.  We had been chasing a 8 inch bass in the shallows the day before but this was no bass.  It was a big old snapping turtle about 18 inches from head to toe and it was going straight for my lure!   Again. I know some of you would catch a snapper in a heartbeat but it wasn't on my list of things to catch!  I started reeling in as fast as I could and that snapper started swimming as fast as he could!  I just barely got the lure out of the water before the snapper made his last snap!  As Maxwell Smart used to always say "Missed it by that much!"  That was the last cast of the morning.  I decided it was a good time to take a walk!

Should also mention that on the morning of the second day we saw a bald eagle soar over the lake.  It passed about 200 feet from the cottage at about the level of the upper deck (perhaps 20-30 feet above the lake)! Sometimes the fish (deer, turkey, grouse...) win.  Never a total "loss" because any time spent away from concrete sidewalks is a win.  Thanks for sharing your trip.

Looks like Ya'll had a good time. I enjoy catching fish, even if I have to throw them back. Fresh fried fish are hard to beat.

Reading this brought memories pouring back of visiting my Great Uncle's at Indian Lake between Niles and Dowagiac and also spending the week a couple years at I believe it was Gravel Lake near Marcellus in a rented cottage.