I have a couple of the Buck 317 twin blade knives. One has had one shard gone from the right side of the knife. It was this way when I found it under a house nearly 30 years ago.

I contacted Buck about it during the time they were moving from California and the person I spoke with was unsure they could replace it at that time as they were doing the move.  I never thought about it much more until several years later.

When I contacted Buck about replacing the missing shard several years later. I was told they could not do it as Camillus made those knives for Buck and they would replace it with a new 110 LB. I thought about that for some time and during that time i purchased a 317 with the sheath off of eBay.

Still not wanting to see the 317 destroyed/trashed simply because its missing the shard on one side. I searched for the same type material that is used for the shard. I did find a website that has the Derlin in varing thickness and that I could purchase it in 12" square sheets in 3/16th of an inch thick or thicker if need be.

Here's my problem. I feel sure I can make a tracing of of the shard from the other knife and can hopefully find a shop that can cut the needed parts out in rough form so I can work them down to the right size and fit. This will be a long term project for me.

Or is there a member in iKC who has more experiance doing this type of job and would be willing to help or trim the shard and fit it on the knife. I can furnish the material and the knife and it does not have to have the sawcut finish on the replacement shard.

This knife has been with me for 30 years and I used like it is for a very long time. The tips were broken off of each blade when I found it and it has or had two bad chips on the main blade. Due to be resharpened so many times there is only one that is still visible and the other one can be barley felt. Here's a couple of pictures of it

Wally, I am going to put a link to this in our group.  Click this link and it will take you there.  I think you will find some great help in there

You 'sound' that you are not overly confident in doing this job yourself. I could do the job for you but even though your avatar is An Aussie Icon .... I am actually on the other side of the world in Australia so I'm not much use to you.

If it were my knife ....  I would take the opportunity to have the knife customized with a total re-handle job, maybe some stag, bone or nice wood.

My reasoning is this ... The knife itself is a very good starting point for a refurbishment ... The 12 X 12 sheet of Delrin will cost maybe $25 (?) and you will only use a very small part of it. If you send it off to someone to re-handle for you they will most likely have some nice materials already on hand for you to choose from. And you end up with a truly unique knife.

Good luck with it...  Derek

I heartily agree with Derek .. now would be the time to replace both scales. The intact scale could be used as a pattern for the required "new" scales.

When it comes to new scales .. your choice of material is almost endless. You'd end up with a uniquely nice knife you've already a history with.

I had not thought about using wood as replacement scales for my 317. It would certinly be unique. D ale Thank you for the suggestion. I will be looking into that option.

Its been a few busy days for me, however I haven't forgotten about the Buck 317. I did locate some Balsa wood (1/4X5"X24" that will be just right for making the scale pattern and I also found some Walnut that is also a 1/4X5'X24" that I can work after I have it cut to the pattern from the Balsa wood.

I've been giving the spring pin some serious thought as to having it replaced or trimming the other side after the scale is removed from that side. The only question is will it look better with a new pin and the new scales drilled for it or will be nicer with out the pin showing.

I kind of wonder as I know the pin will help keep the scale in place. however I have no way to brad the pin once its installed. Well darn it back to work.  House cleaning.....  :(...  actully the closet. I had forgotten how much stuff you can store in a large walk in closet.  The closet and my storage building.

I have a couple of large speaker sets and more audio gear than I'll ever use and to darn many computers and I need to get it all gone........  maybe a yard sale.... No CL I've already had all the dealings with the low ballers I want......  and I'm OT Sorry..... at times I get carried away

I have been working on the 317 off an on for a while and got the black Walnut that I had selected for the scales worked down to where I could fit it on the frame.

I've had working on the knife on my mind for sometime but just wasn't really in the mood to. As I have all the tools I need to finish it up. I thought why not.  One scale is nearly complete. It just needs a bit more sanding on the edges for that rounded fit on the edge.

The other one needs to be sanded down to where its the same thickness as the other one. Its pretty much done as far as fitting the frame.....  just a bit more work on it and they will be ready to mount on the frame....... oops all pics of the same side.............  lol. I'll add the rest a bit later.  I should have this project done by Mid June or sooner. 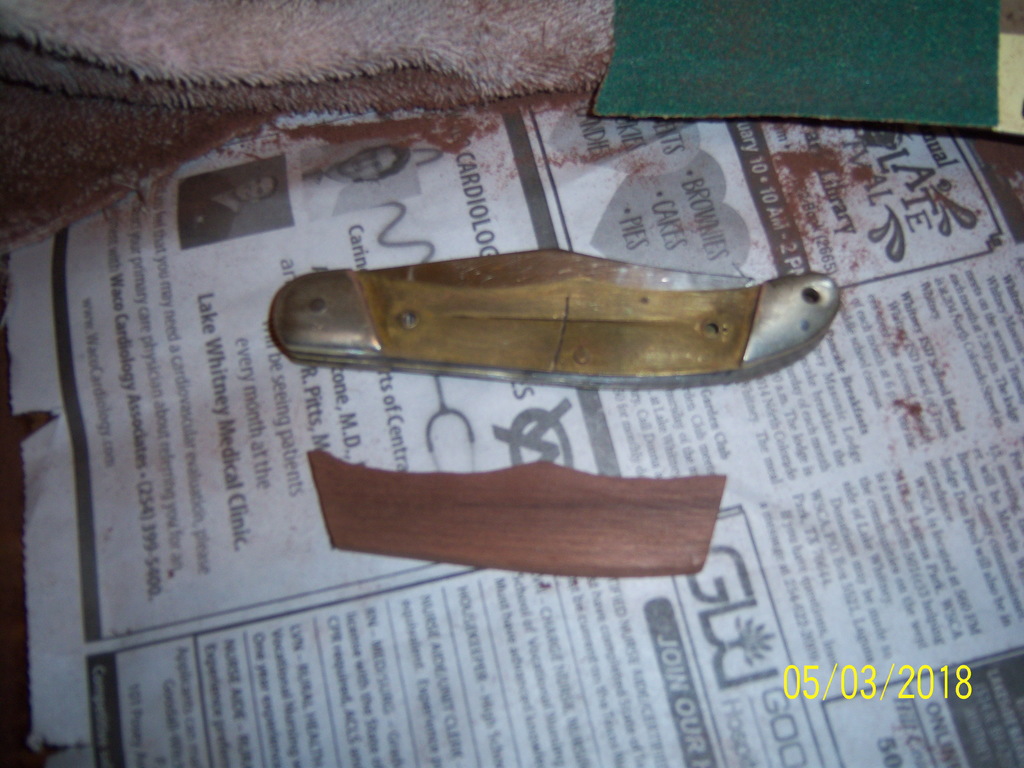 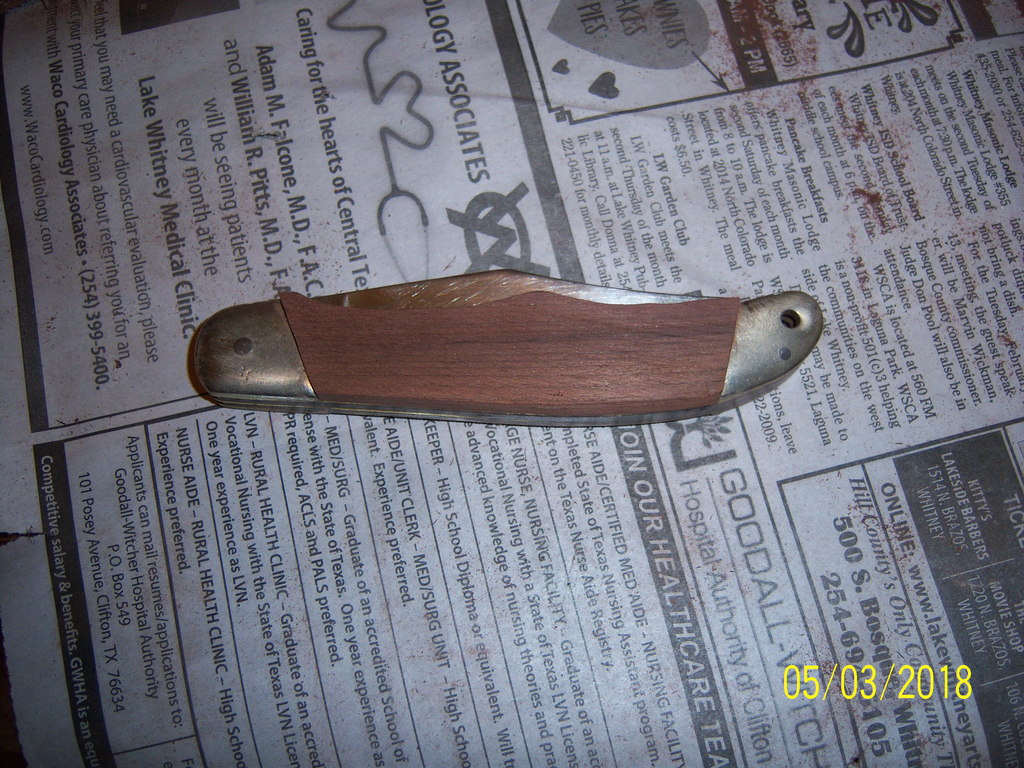 And the other two pictures of the other side. the scale with the hole in it I ruined by being in a hurry 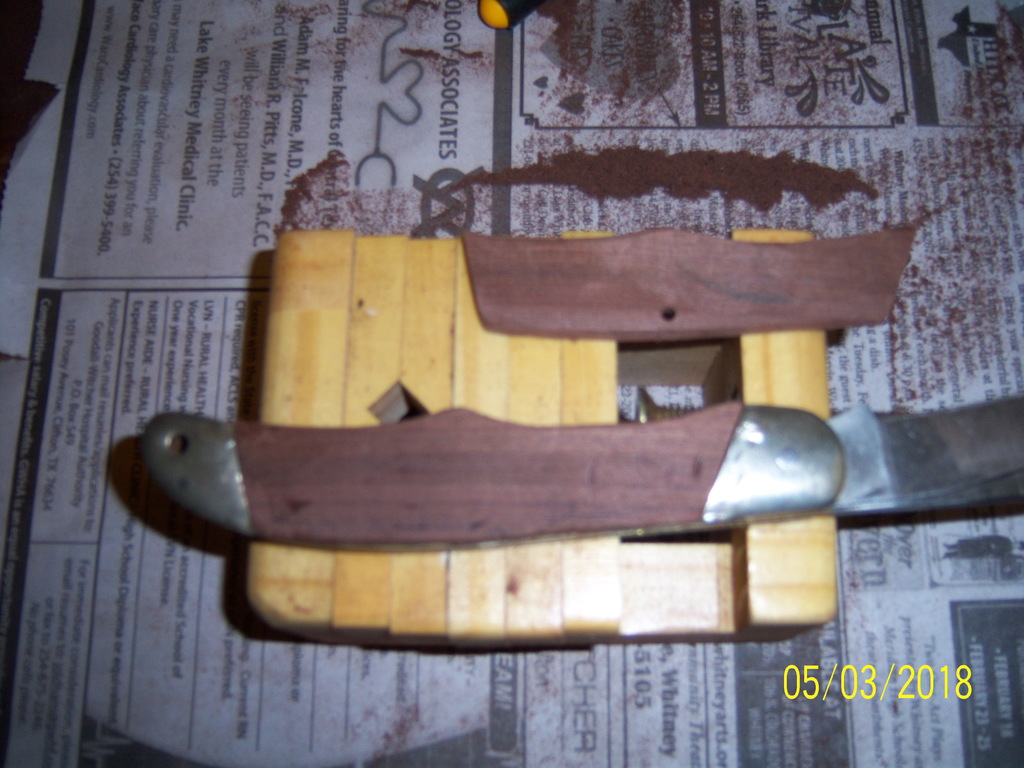 Almost done. The scales have been fitted, trimmed and the sanding on them is done at last. All that left to do is mount them on the frame with the right epoxy and I've been watching a wood working program on PBS and saw where an epoxy was used as a finish on some wood work. It looked beautiful plus it sealed the wood....... Good idea for knife scales??

The knife itself will need polishing on the bolsters and along the exposed frame. So although the scales are done as far as the fitting/sanding there is still much to do. I do not know how well it will polish up as its lead a working life and it shows it

It still walks and talks and I would not be afraid to use it as an EDC if I had to. 30yrs is a long time to own a knife and work it hard for about 15 of those years 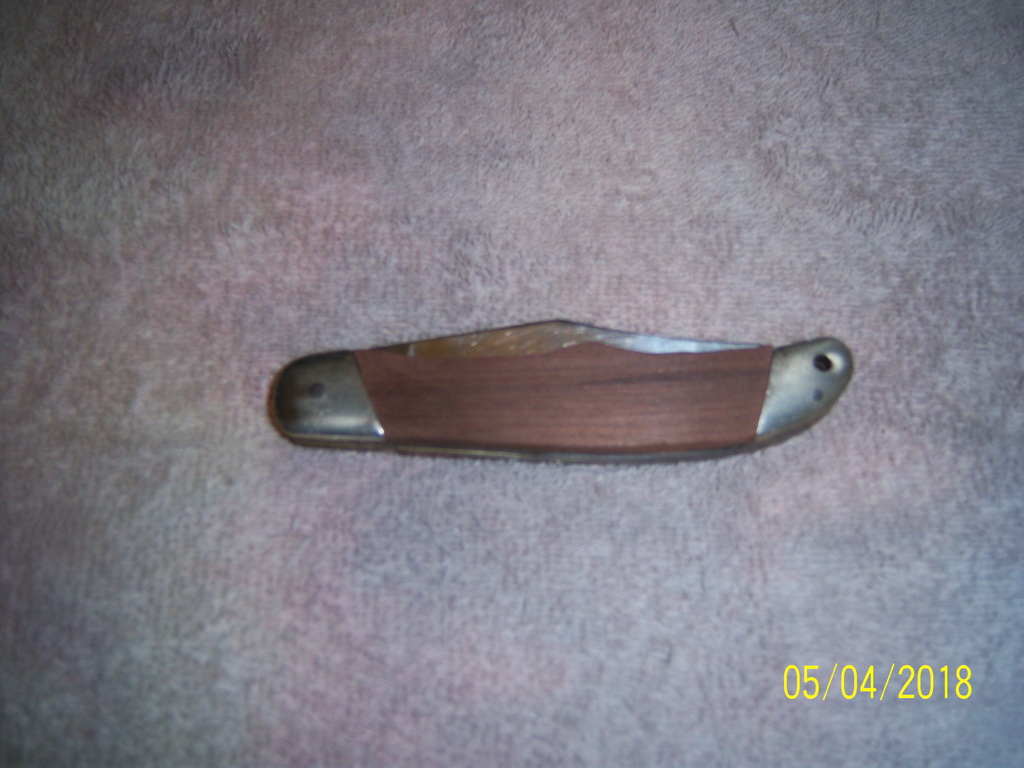 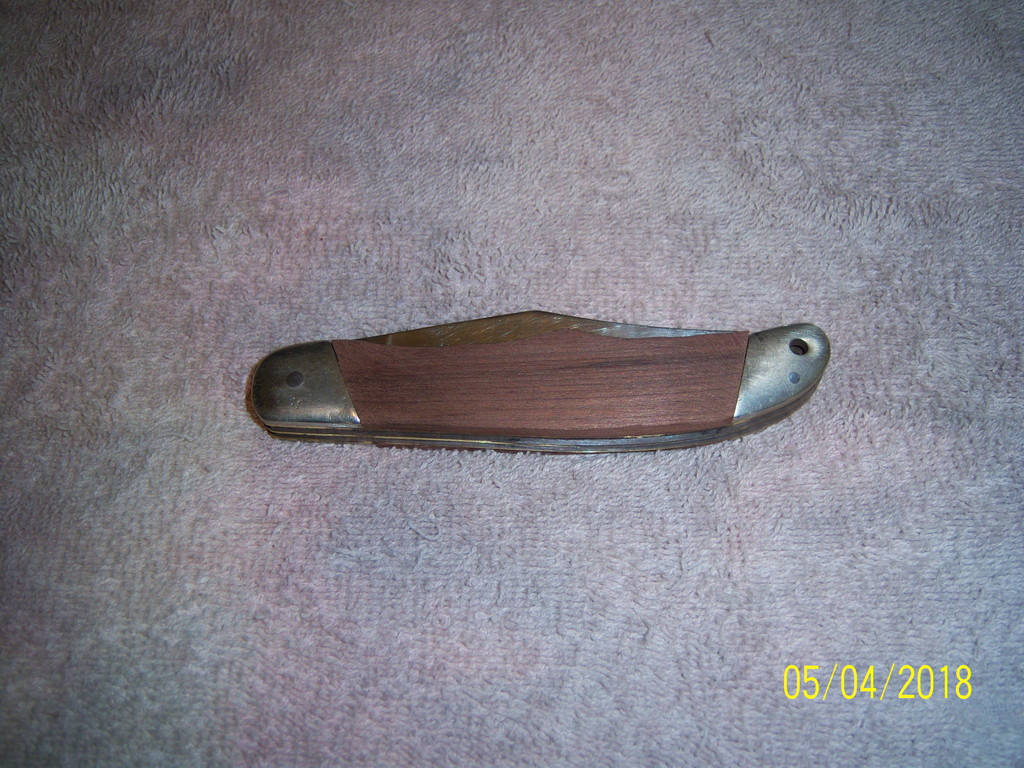 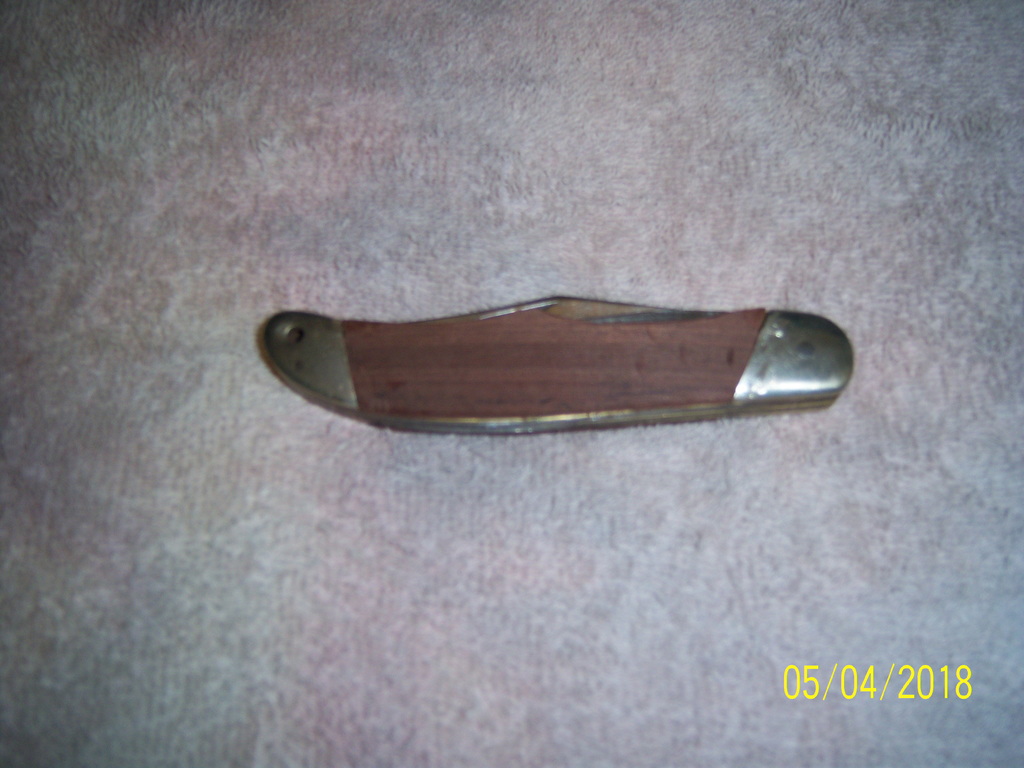