The two terms are tossed about pretty freely and are applied to a variety of knives.  Too me both are general utility knives that are used in the wilderness.

For some people the difference between the two is:

Bushcraft Knife:  A general purpose utility  knife that you bet your life on in survival situations.

Camp Knife: A general purpose utility knife that can make or break your week-end adventure.

But is that really the case or is Bushcraft just a new term  for a camp knife.  After all some of the old camp knives were built especially for surviving in the wilderness not just spending a week-end  drinking beer around the camp fire.

Pretty sure its a glorified Camp knife. Not sure anyone is quite doing life survival unless they are military or have a survival TV Show.

Permalink Reply by Brian Martin on May 15, 2015 at 20:53
I think it's a camp knife right up till you feel the need to beat the hell out of it batoning! Not sure why this urge hits you but it must be contagious. Lots of reviews of bushcraft knives and the batoning is the deciding factor if it can wear the name Bushcraft knive. I haven't caught the bug to use a knife in this way but I figure a good quality knife can handle it. My notion is the bushcraft knives are just toughened up camp knives!

Funny Brian, I have never had that urge either but it is nice to know some of my knives would hold up to it if I did

That means my old Camillus MkII fighting knife was bushcraft before they came up with the term.   I've batoned with it long before I even knew that pounding on the spine of knife to cut through would is called batoning!

To me bushcraft means carbon steel blade 1095 or better,  full tang and some time of unnatural material for the handle (G-10, thermoplastic, micarta), a relatively short blade (4-6 inches)  and a flat or convex grind on the blade.

But essentially it is just a heavy duty camp knife, often over built for most chores and quite often impractical.  Seems a camp saw makes more since that batoning.  Why beat the crap out of my knife to cut through a 3 inch sapling when I can accomplish the same task with the wood saw on my Swiss Army knife?  And how do you cut your baton in the first place?

The reason I ask in the first place is I'm starting to see some pretty scrawny looking  Bushcrafters showing up these days.

Perhaps the term as superfluous as "Survival Knife"

Tobias, you raise a worthwhile point for discussion.  Not all that long ago the common wisdom was that a bushcraft knife had to be something like this:

But now it seems that more wisdom is prevailing and a good bushcraft knife looks something like this:

And more common thought says that if you need to chop wood then have a tool for chopping wood . . . like this:

and if you need a saw then pack along a good pack saw, something like this: 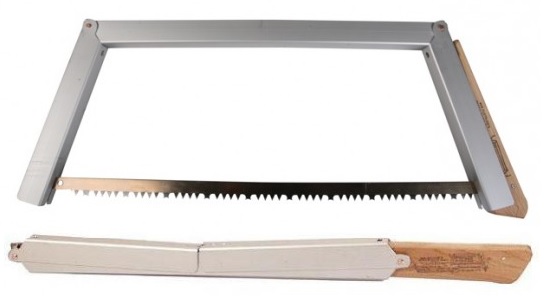 So really the thought is to either take a massive knife that you will depend on to do everything or take tools designed for the task at hand.  If we are talking about a bug out bag then weight can be a consideration but how many people are really evaluating their real life situation and how many people are getting sucked into the YouTube notion that they are going to be living off the land after a total breakdown of society?  I think realistically, very few people will ever be living off the land after total world collapse.  Besides which, the majority of "survivalists" making these YouTube videos are making them in their backyards and are probably never really setting foot in the wild.  I myself, think I will probably bug out as far as my backyard.  If things are very, very bad then I do have a mountain retreat where I can drive to but I will certainly not be walking 15 miles with a 50-pound pack on my back.  I will be going there in a 4-wheel drive pick-up truck packed with my camping gear, and I kind of like the idea of having a good saw, hatchet or axe, maybe a couple of good knives, to include a multi-tool, and a good supply of food and water to live on until I can return to my home.

And I would consider those items a Camp knife, Camp axe, and a camp saw.   Remember back when all sorts of companies offered a knife/Hatchet combo?  They seem to be making a resurgence.  Perhaps the bushcraft knife that does it all is going the way of John Rambo.

They are making a resurgence Tobias.  I don't know that it is the death of the "bushcraft" knife or simply that most have figured out they are not going to be outrunning the zombie invasion and the tools for the job can be simple AND simple to have on hand

First let me say that I can't "bug out" in the normal way that most people use the term.  For the simple reason that my wife is not physically capable of bugging out and I am going to stay to take care of her.  In all but two possible scenarios our only choice is to hunker down right here.  One scenario is storms.  For tornadoes we go to our church for shelter which is one mile from our house.  I do have a tornado bug out bag and it does have a knife in it, a multi tool type knife.

The only other reason we would bug out is if the nuclear power plant 15 miles from our house would melt down.  That is an entirely different situation.  Who knows how long we would have to be away or even if we could ever return home.

That said I can see the need even for me of a bushcraft type knife.  I see it as a bigger, heavier, meatier knife than a camp knife, most likely a fixed blade.  What would I use it for?  In a few months I will be scouting for and preparing for deer season.  I will probably be using my Rough Rider Sidewinder and/or my Frost Bowie knife for things that my EDC or a camp knife just wouldn't be adequate.  Whenever I go to the woods I always take my RR with me, even if just riding my 4 wheeler.

Permalink Reply by Brian Martin on May 16, 2015 at 20:35
I would think a bushcraft knife has to full meaty tang! I would also think it needs bullet proof scales. I want some sort of guard or pronounced finger grooves to prevent my hand ending up on the sharp end of the blade.

Here are the two I would consider my bushcraft knives. The "new survival experts" say you have to have a large knife for chopping--like Canterbury, Hood, etc. as that's the only knife you should carry.  Their comments are that you can do more with a big knife then you can with a small knife (bullcrap) but then most, not all, of them have no knowledge of using a small knife.  Canterbury contradicts himself in his book "Bushcraft 101" by saying that an axe and a saw are more important and Hood designed that ATAX atrocity that he marketed as an all around survival tools that is/was an abysmal failure.

The biggest fallacy is that they never distinguish between long and short term survival and the difference between military and civilian and trust me there is a huge difference between them.  Military you get picked up (in most cases) and civilians (if smart) left word with someone so a rescue can be accomplished.  Then again, most US troops (and others as well) aren't issued any fixed blade knives, period, and in most cases can't carry self bought ones on base and/or in the field due to commanders' orders.

Just like the fools who say they can live--long term--on a diet of rabbits and other small game.  Firstly, they'll kill off all the game in no time and secondly, they'll kill themselves with "rabbit starvation/Mal de caribou".  Look at the WW2 Japanese prisoners and German concentration camp survivors for what starvation looks like.

They purport that the bigger knife is ideal for chopping but the vast majority of knowledgeable hunters, hikers, backpackers et al are carrying smaller knives when they go into the bush and maybe get lost or injured.  Taking coniferous branches of trees is easy even with a pocket knife and from those you can build a decent shelter.  Even from deciduous trees, limbs are easy removed and a shelter is quickly constructed that will last for the short term.  You don't even need to chop wood as you pick up or drag deadfall to your fire and as the tips burn down you keep pushing them in.  You just need a bit of tinder and some kindling to start it and that can be down easily with pocket knives--you don't need a 10" or larger blade to accomplish it.  Long term, I doubt very much that they'll be able to construct a permanent log structure with just a big knife.

I spent six months a year, for the past twenty four years, in the bush and have dressed out more fish and game in one year then most have in a lifetime and the largest blade I carry is a Bob Dozier KS3 Pro Guide 5" bladed knife.  That isn't quite true, I/we use a machete for brush/site clearing.  I also carry a cruiser/canoe axe and a folding saw in my pack and have built small structures with them--spent five days in one with two clients before a float plane could get in.  Depending on season there is a caper and skinner or a pair of fillet knives in the pack along with a Boker Scout/Camp knife and some other folder in my pant's pockets.

What gets me is that authors from the turn of the 20th century and who had a lot harder time of camping never used large knives and most of the modern authors are just rehashing Kreps, Olson, Kephart, Jaegar and substituting most equipment for the canvas and naphtha with nylon/Gore Tex and butane.  Then Kochanski, Mears, Stroud et al are using Mora sized knives and surviving quite well with them.

You don't need a big knife unless you're in a military special forces unit and are expecting knife combat (and that is different altogether from civilian fighting).  Little of the Hollywood slashing and more stabbing in the kidneys or the throat for silent sentry removal.