If Knives Could Talk...

...I wonder what this one would say?

Here it is, farm fresh, just as I received it. It immediately was reminiscent of a John Ek knife in that it had the three large screws holding the leather handle to the tang of the blade. There are no marking to be found anywhere on either the knife or its sheath. Aside from some slight rust and discoloration the blade appears to be in very good condition. The leather handle is basically still intact with scuffs consistent with age. The blade was ground quite nicely with a sharp tip and a 2" false edge on its topside. 7.25" of the 8.25" blade were sharpened. The overall length of this knife is 14". I believe it was intended to be a Fighting Knife?

I invite you to view the numerous pictures and offer your opinions on what this knife may have been and how I should proceed to restore it so as to preserve it and prevent further rust and/or deterioration. It's basically a pretty solid knife that has been stored improperly and could use a little love and attention. But, of course, isn't that what we all need?

And now the pictures... 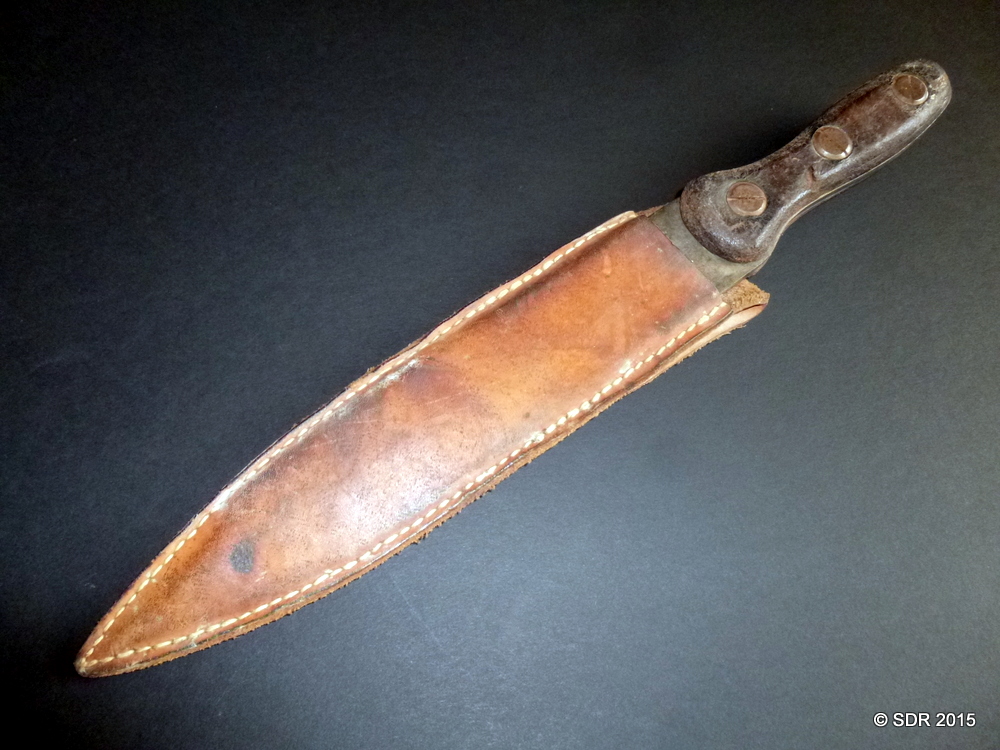 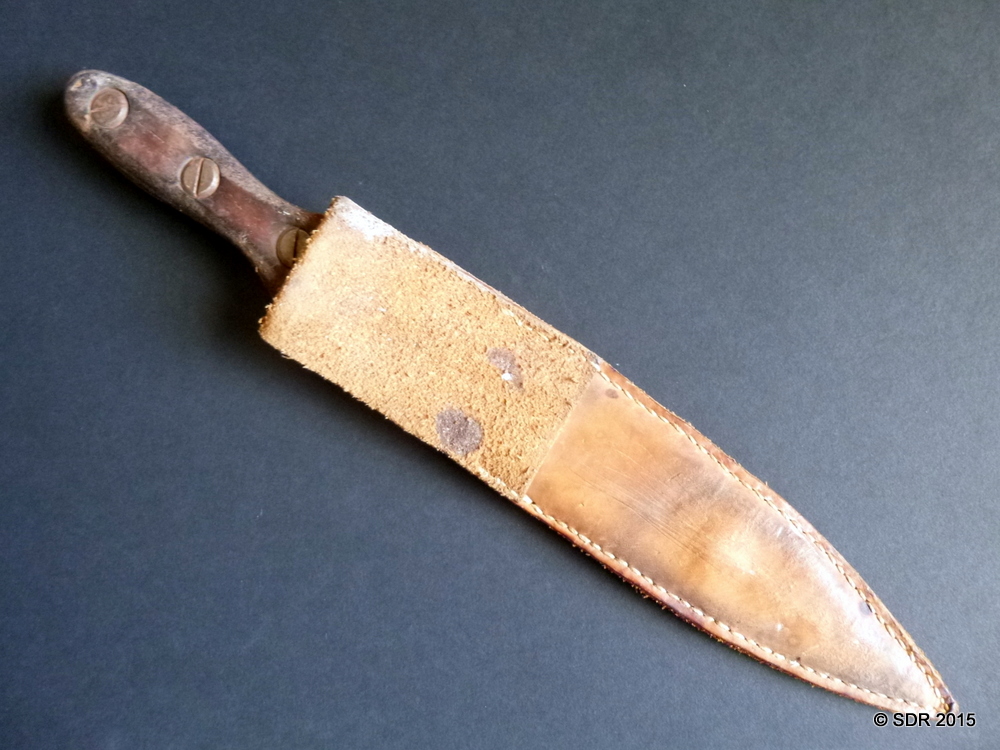 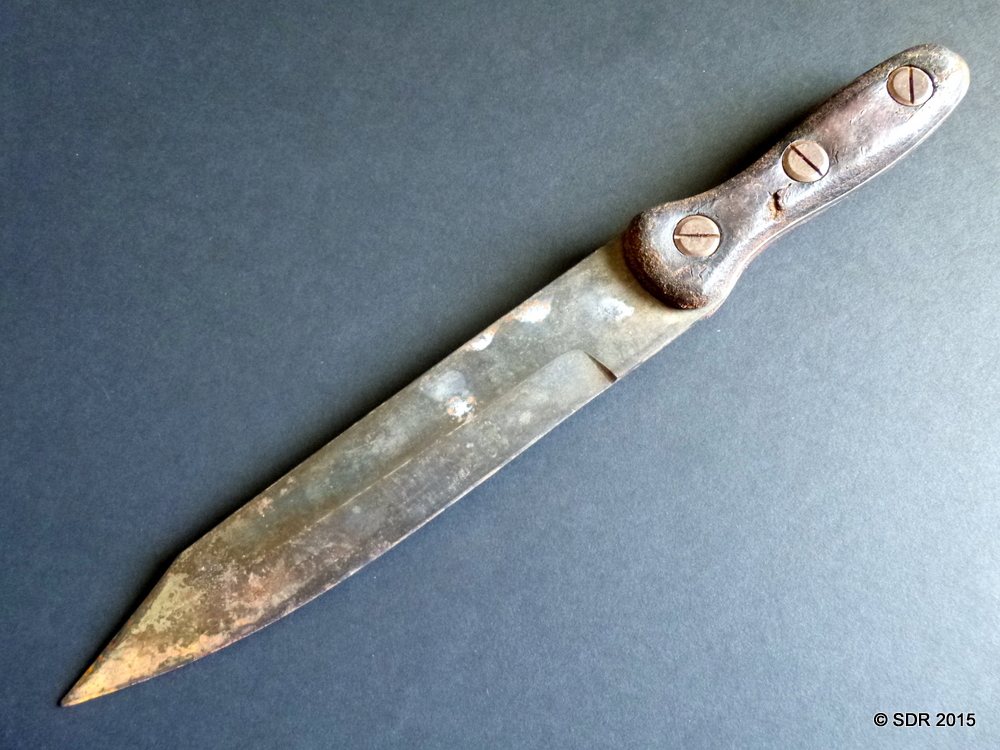 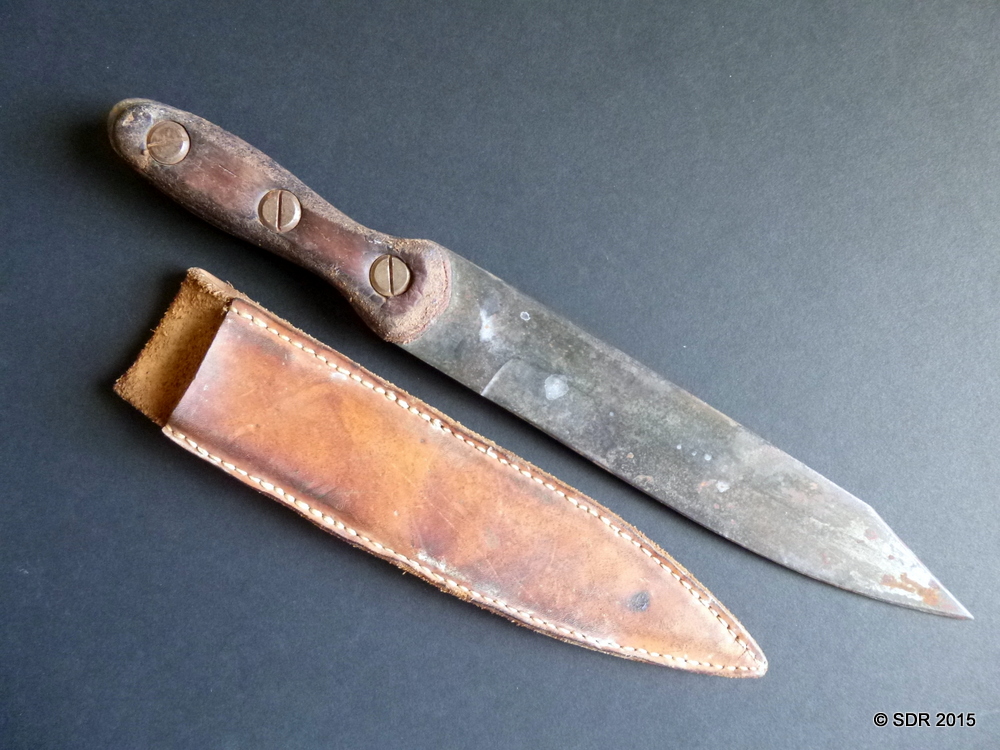 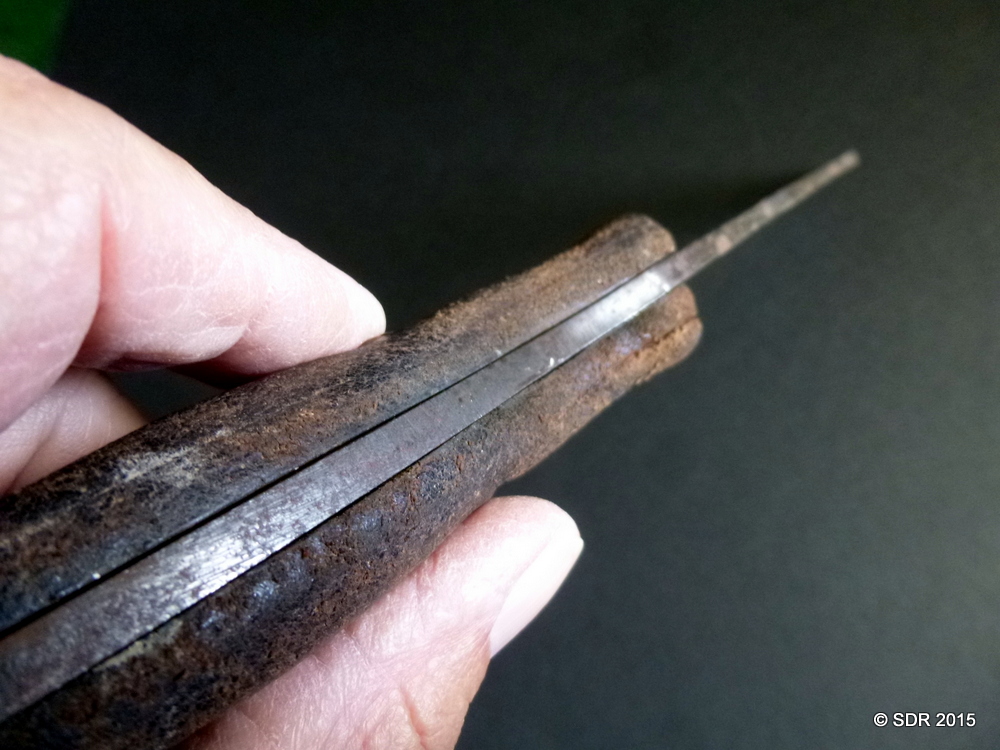 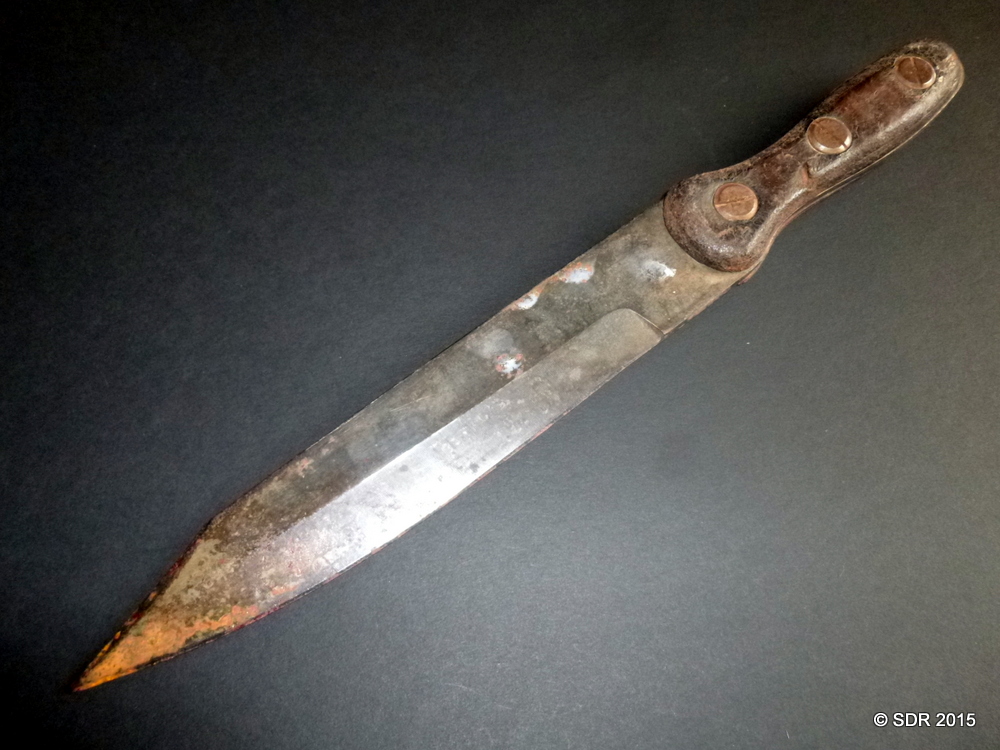 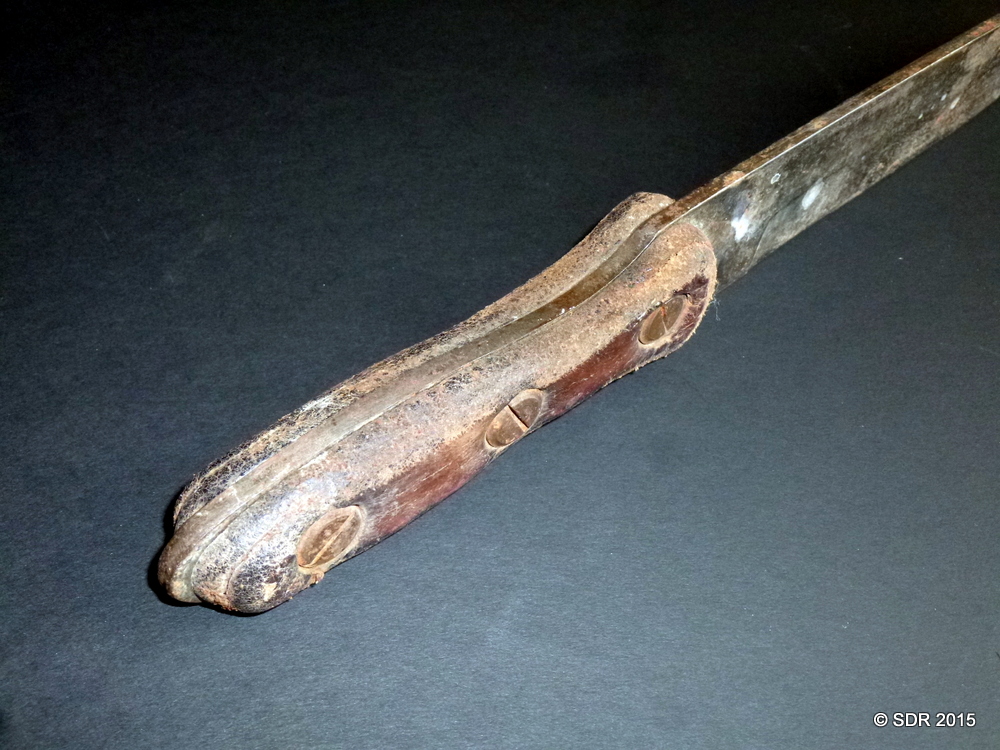 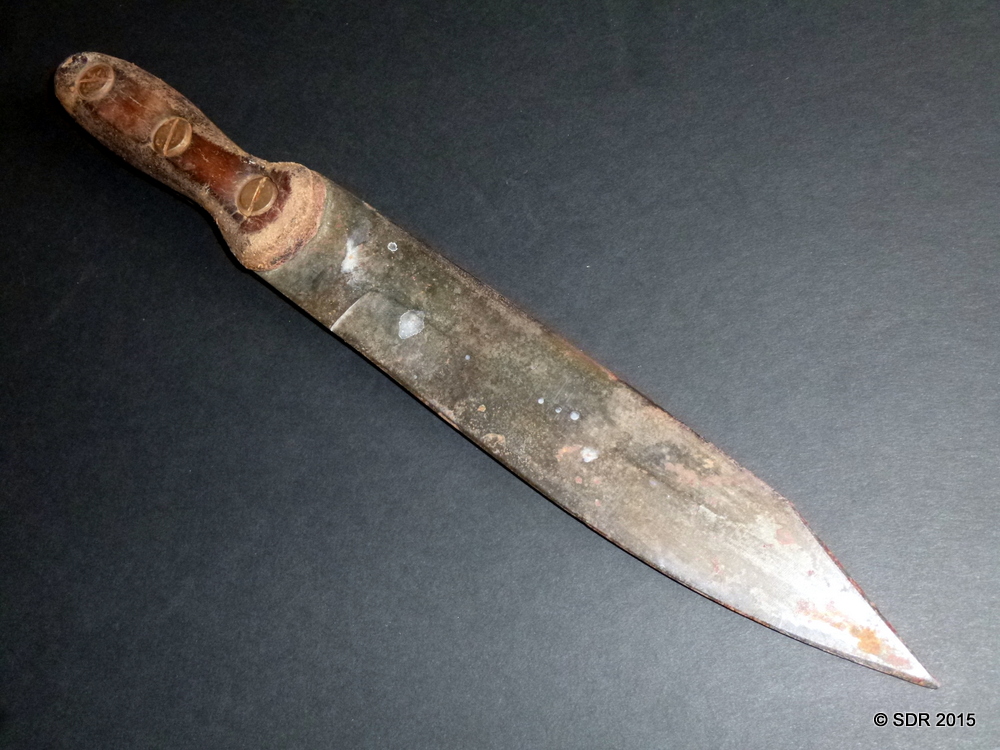 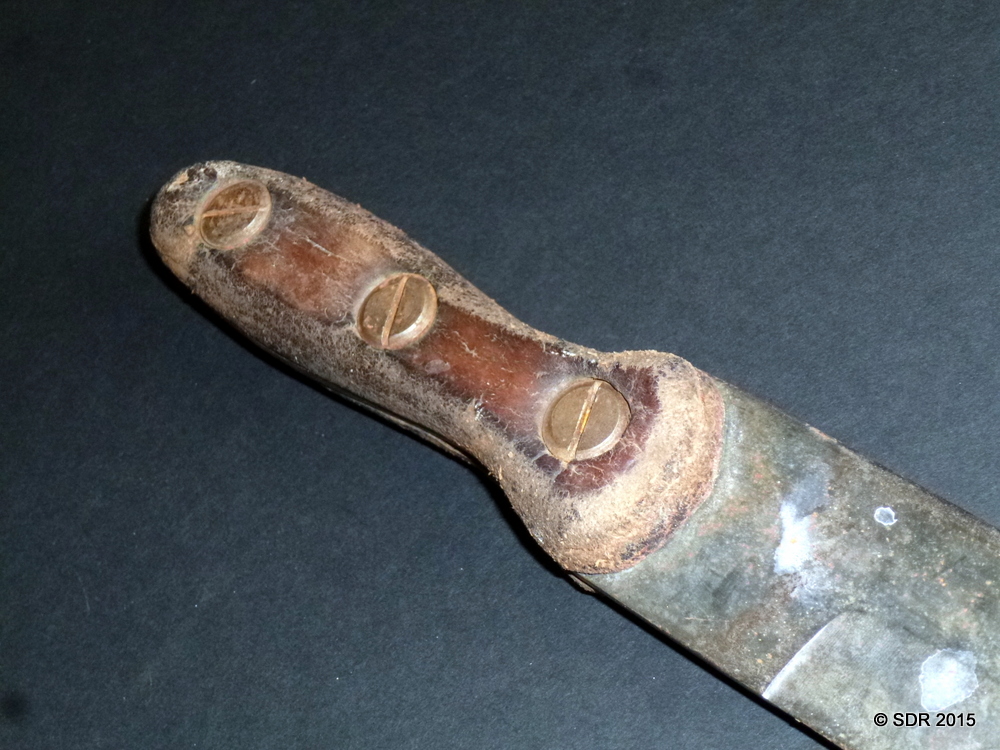 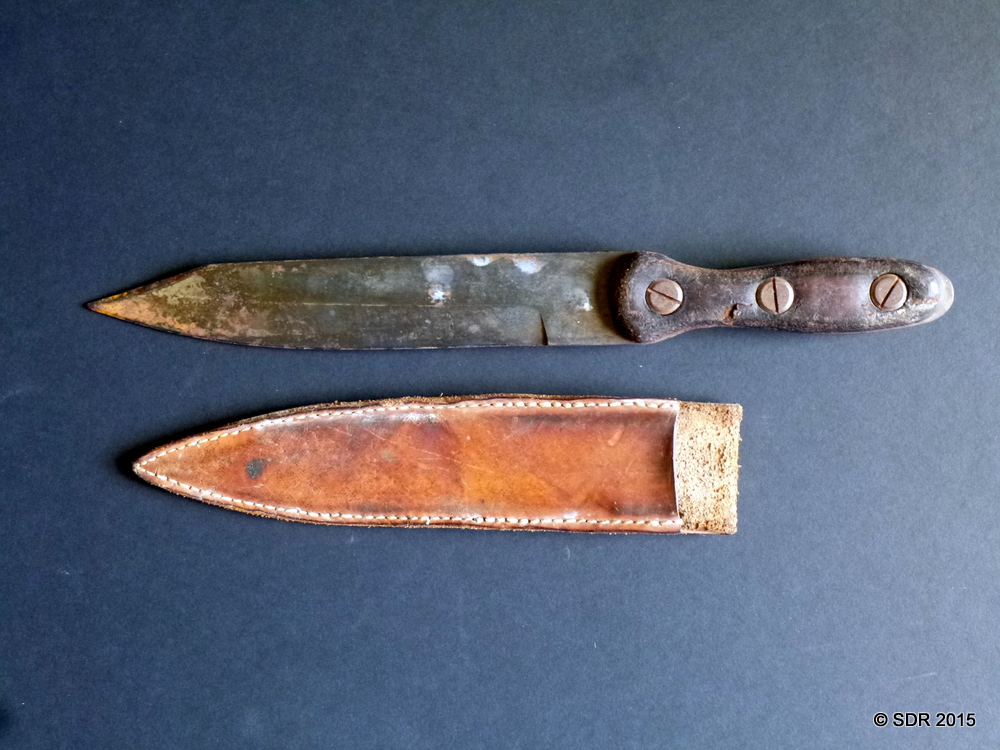 So there you have it. Like I said, it appears to be an old fighting knife. The construction is similar to many of the early Ek knives, although Mr. Ek's screws were poured lead and not screws at all. But this knife uses what I suspect was a 1/8" tool steel which was the same as John Ek used. I suspect that this knife was roughly patterned after an Ek knife? And perhaps its history was similar to many of the fighting knives of that period? I can only guess?

What say YOU? Any ideas about this knife? What does it look like to you? And most importantly...What can I do to preserve and protect it? I am asking for some help...Your help! Please, I'm throwing it open to discussion. So have at it!

If this knife could talk ...I think the first thing it would say is....home at last!!!!

I will try my hand at this.  First i think I might soak the handle portion in some neetsfoot oil and see if it comes back.  Based on the condition, it might still be a bit rough but I think it would do well.  While your at it, see if the sheath would like some also.

Based on the codition of the blade, I am thinking something along the lines of 1095.  Some simichrome might help a good deal, maybe get you down to where you can tell if there is actual damage to deal with.

I, for one. want to see this one as you move forward.  Nothing better than watching a knife come back to life!

Thanks a million for your input - It's greatly appreciated! I'll definitely give your suggestions a try and keep you posted on my progress. It's currently resting comfortably in ICU.

Can't wait to see it restored.

neat knife, waiting to see it cleaned up.  I like Jans cleaning advise, you wont over clean it that way.

Very cool blade!  I would leave as is, maybe hone the edge and treat the leather handles and sheath so it will not degrade any further.

And, yes! That's really all that I have done so far. As per Miss Jan's suggestions I have applied neatsfoot oil to the handle and sheath and I also oiled and cleaned the blade. Basically it has just been sidelined by other projects - non knife related - that have taken up most of my time. Your comment has served to remind me that I need to pay some attention to this wonderful old piece of cutlery. lol...I'll see what I can do?

Glad your back taking a look at it Ron, this knife deserves some TLC

Michael Leonard is now a member of iKnife Collector
yesterday
Welcome Them!