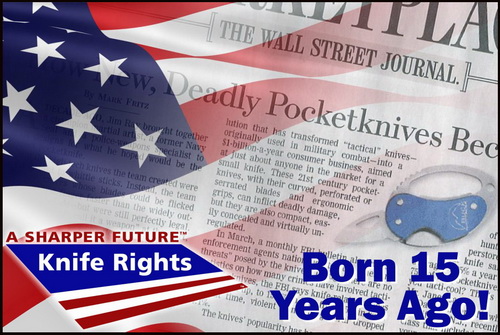 It was on this day, July 25th in 2006, that I opened the Wall Street Journal to an article "How New, Deadly Pocketknives Became a $1 Billion Business" (read the article at: www.KnifeRights.org/WSJ2006). That overwrought and sensationalist article was filled with distortions, misrepresentations, innuendo, outright lies and cherry-picked quotes pushing a transparent rabid anti-weapon and anti-freedom agenda attacking loosely defined "tactical knives."-- what today many would call "fake news." But, the story didn't quite spark the anti-knife response the reporter clearly hoped for -- in fact, it had precisely the opposite effect.

As I read the article with its ludicrous example of a wicked "tactical knife," a diminutive Buck Knives Metro one-hand opening lock-blade keychain folder and bottle opener with a terrifying 1 1/8-inch blade, it struck me that unlike the situation with firearms, there was no proactive and aggressive advocacy organization fighting for knife owners. Nobody was trying to undo over 150 years of irrational, often vague and always ill-advised laws restricting the right to own or carry knives. That was the spark that lit the fire in me to form Knife Rights

The author clearly intended to initiate the demonization of "tactical knives" in the same manner as he and others had been demonizing and attacking so-called "assault rifles," aiming for bans and restrictions. Not such a far-fetched idea when you consider that the opening salvo to demonize switchblades in the 1950s, resulting in the Federal Switchblade Act and multiple state bans and restrictions, began with a similarly overwrought, sensationalist and fact-challenged article "The Toy That Kills."
Back in 2006 I coined the trademark slogan "A Sharper Future™" to encapsulate the ultimate goal of the just-founded organization. Despite the many naysayers and many obstacles, that "sharper future" I promised has become a reality. Knife Rights' efforts have resulted in 34 bills enacted repealing knife bans in 23 states and over 150 cities and towns, most with bipartisan support. We have also been responsible for stopping nine anti-knife bills. You can add in a number of litigation victories as well to that tally. View Knife Rights' accomplishments at www.kniferights.org/about/accomplishments/
No matter how much passion I had, we could not have accomplished anything without the support of so many good people and businesses that share my vision to rewrite knife law in America™. Thank you so much for your generous support. Together we are making that vision of a Sharper Future™ a reality.
I also could never have done this at all without the support of my wife, Sue. She deserves as much credit for our success as anyone.
We have just kicked off the Tail End Bonus Drawing portion of our annual Ultimate Steel Spectacular fundraiser. All donations made AFTER TODAY's Launch are entered to win in BOTH the Main Drawing and the TAIL END Bonus Drawing! Donate now and get DOUBLE THE CHANCES TO WIN!
Please, support Knife Rights, get chances to win spectacular prizes and help us continue to rewrite knife law in America™, forging a Sharper Future for all Americans™. See the prizes and donate at: www.UltimateSteel.org

Jan Carter left a comment for Bobby Branton
20 hours ago

KnifeMakerBobby Branton is now a member of iKnife Collector
22 hours ago
Welcome Them!