Jeremy, there are so many versions of "bushcraft" knives, from small Moras to that BK-9.

I have watched several youtube videos, including PreparedMinds101 (Chris). I most recently watched one on the Kershaw Camp 10. I haven't ruled anything out just yet. I do like you idea of having a bushcraft tool set. I am already heading that direction. I have a saw, tomahawk and multitool. I guess the knife is the missing tool in my kit. Thanks for your input.

Nice!  Is that Camp 10 review the one with the guest host?  I was watching that one I think because I was in the market at the time for a bigger user knife, & that Camp 10 is quite affordable.

I ended up scoring a used Kershaw Outcast for about $60 on eBay instead (not sure why they stopped making that one other than that maybe it was too expensive to make for the number of units sold -- 10" D2 3/4 tang blade with a full Ken Onion recurve, which had to make it hard on their tooling).

I fell in love with tomahawks several years back after throwing a few at a rendezvous one of my friends set up (he's a recreational director for a city nearby).  Then we had a big storm in Minneapolis a few years ago that brought down a lot of trees, mostly old growth pines.  I set out to help neighbors remove a 70?-foot pine that fell from their proerty across the street with a medium sized Stanley (I think) axe bought from an estate sale, an old (1950's?) camp hatchet, & my Cold Steel Rifleman's Hawk.

The Stanley worked fine but hadn't been sharpened in too long to be effective, the camp hatchet was incredible but after a while the old head separated from the likely original handle, & the Rifleman's Hawk had a handle that was so small it just caused my hand to cramp.

After that experience, I decided it was time to upgrade to a tool or two that could to some serious work -- a Council Tool Jersey Axe with a 36" haft.  It's such a beast no storms have come along to knock over any trees since then, likely out of respect.  ;)

Jeremy, there are so many versions of "bushcraft" knives, from small Moras to that BK-9.

I have watched several youtube videos, including PreparedMinds101 (Chris). I most recently watched one on the Kershaw Camp 10. I haven't ruled anything out just yet. I do like you idea of having a bushcraft tool set. I am already heading that direction. I have a saw, tomahawk and multitool. I guess the knife is the missing tool in my kit. Thanks for your input.

DLKG - The review I watched on the Camp 10 was "Kershaw Camp 10 - Hardcore Test" by Tactical. The Council Tool Jersey Axe looks like a great tool to have. might have to add it to my wish list.

An option some might not normally consider "bushcraft" knife but very versital in the field, are 1. Leatherman Surge or Super tool 300, both have nearly identical tools just operate different, but they are some of the biggest leatherman tools out there with some serious tools, I use the surge.  the saw/file are interchangable and use the Bosch brand jig saw blades, so you can keep a small variety in the pouch.I'll have to post a picture.  2. the victorinox swiss army Trekker knife.  4 inch main blade and a 4 inch wood saw, and the normal swiss tools, awl/drill, philips, flathead/pry tool with wire stripper, small screwderiver with can opener, main blade locks too, and in a twist mine is half serrated, on the tip end, much more useful, I realy like the serrades on tip end.

granted, batoning is probably out of the question with these, but you could fashion a tool to do the task, I usualy carry one of these as a supplementary tool or B.U.T.( back up tool), just made that up! better go trademark it before it goes viral!

you know, I sent one of these to Hog once and he has not had a change to check it out yet but I liked it enough to want to see it given a trial 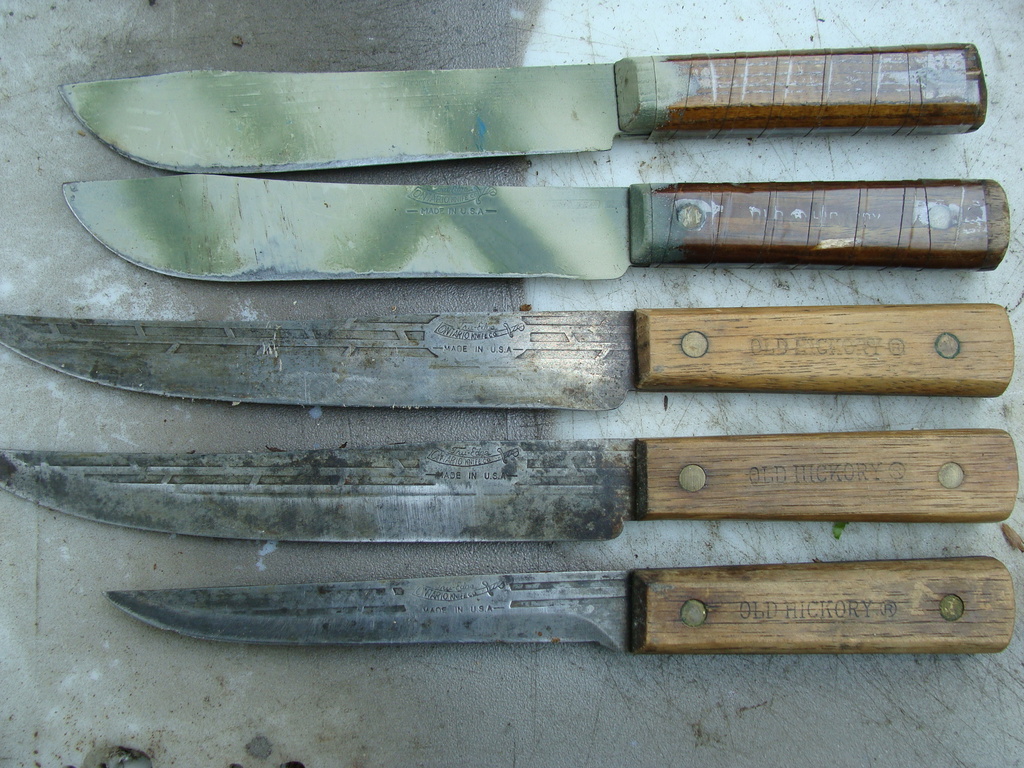 How thick are the blades on these James?

about 2.5mm thick, no distal taper, so the spine is the same until it gets to the grind near the point.  click on the link(at bottom of picture) to see a short demo i made.

How thick are the blades on these James?

You know I recently bought an Old Hickory 410  field knife to use as a light weight machete.  I was sold on it when I tested by hacking a 2X4 in half.  I've got bigger and heavier machetes, but for $10 this one has proved probably the best bang for my buck.  Dirt cheap and effective. It's full tang with a 10 inch 1095 Carbon Steel blade. Blade is perhaps an 1/8th inch or so thick but it gets the job done. Now thats what I am talking about James & Tobias.  As this discussion has grown it is becoming apparent that a knife that will NOT be an EDC, will NOT see regular use, just needs to take care of the chores when it is needed.  No sense in spending a good deal of money just get a good knife, take care of any sharpening needs it may have and spend you $ elsewhere

So true, Jan.  I've got close to 500 knives sending around and some of them would be excellent choices for survival situations.  If the SHTF in my basement I'll be set.  But in reality, the knife I'll most likely be stuck with in any given situation is the one in my pocket or in my bag as these are the ones that I have with me.

As such, I assess the situation at hand, determine what I can carry without getting in trouble with the law, and choose wisely.  Thus, when I'm going to and from work and the risk of being placed in a life threatening situation is low, I don't need  machete or a large fixed blade and if a cop were to find me carrying one in my bag on the streets of Chicago I could be in more trouble than I bargain for.

But when I'm fishing or hiking about in a forested area away from populated areas a good fixed blade and larger pocket knives make sense.  The potential for trouble has been escalated.

And If I'm planning on using a knife or any tool  for major disasters or survival then I should make darn sure I'm familiar with it and put it through its paces before I put it in a bug out bag!  Survivalist on television and companies who sell survival stuff  are making a profit off of what they are selling.  Some of it is good stuff but most of it is junk and quite a bit of it is over-priced junk!    I Know this for a fact because I've bought enough of it!  What's more, one person's junk is another person treasured tool.  This isn't because one person has no concept of what a good survival or in this case a good bushcraft knife is - its because the two people have different needs and different expectations of what they want and need.

Very good and true info. Tobias. I knew I would get different ideas from different people. That is exactly what I was looking for. I have a variety of fixed blade knives, but would really like to have one that can hold up to some abuse, if necessary. I have plans of going on a couple more camping trips this year and possibly more in the future. I would like to test out what ever knife I get, while camping. I always have a pocket knife on me and will certainly use it for smaller cutting needs, but I want something that I can chop branches with, split small logs and cut large items such as meat and potatoes.