Before I was really into knives (Into as in, learning about steel types, knifemaking etc) I was into straight razors.

My knowledge was limited to two steel types (carbon and stainless) and all I knew was that you needed to get them up to Rockwell 61 or so to make a good razor.

At that time I was a member (and still am) of a Straight Razor forum. (www.straightrazorplace.com). On there at one point someone talked about the fact that he'd gotten a new pocketknife. That was a Mcusta MC-1. (picture borrowed from Amazon.com) 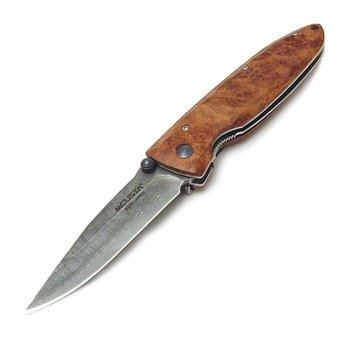 From there on I decided I wanted something in Damascus and I started digging into what makes a good knife a good knife and it all went down (or up depending on your viewpoint) hill from there.

Well, it's YEARS and years later and I still didn't have a Mcusta despite wanting one for all this time. Then....while my wife was in labour....and we were bored waiting for a doctor or something to come I was playing around on my smartphone and noticed that someone had a Mcusta Tactility up for sale (this was around last October...the 5th to be precise) for a price that I just couldn't resist.

So a couple of days after one of my favourite gifts ever ( Zoey Ellen Noot) arrived, my Mcusta arrived, after wanting one for around 5 years or so.

So let's get into the nitty gritty of things:

All materials that belong on a quality yet not super high end knife. Perfect materials for an Every Day Carry knife. The steel is a mid/high end stainless. Micarta looks nice, has a nice feel to it, will hold up in almost any use and yet won't break the bank.

It's quite a sizeable knife. It's however not very wide which makes it feel a little smaller than it really is. Will fit just fine into almost any pocket and is a nice handfull to work with.

When open this knife you'll have a hard time believing the sticker price. The smoothness and yet tight movement that it has makes it feel like it should

Well, it's not and it doesn't. It's one of the very few knives that I've gotten that I was able to thumb flick open without any wrist movement the moment I got it. Now I got mine secondhand. But it was unused and I've seen a LOT of reports from people that got theirs straight out of the factory that experienced the same thing.

Other than that there are no sharp edges where they shouldn't be (more on that later in the Design portion), the micarta is nicely polished and the clip has the perfect amount of tension to both clip it IN the pocket and take it OUT of the pocket. In my opinion this is possibly one of the most perfect production knives that I've seen around.

As I've said before, there are three factors to sharpness

Out of the box sharpness is A-MAZING. I think the is most likely the sharpest knife I've recieved from any factory and sharper than I've seen from many custom knifemakers. It would shave hair easily and cut circles in printer paper without any effort.

It's fairly easy to sharpen. Nothing horrible. The initially very sharp edge means that most sharpening is just upkeep really. A few passes on a very fine stone or loaded strop and it's right back to hair popping. If the edge had been obtuse from the factory this'd been more of a rough time. But with the initial edge this good keeping it sharp is a breeze.

Edge retention is good. VG-10 at Rockwell 58-59 is good stuff. I found a short video demonstrating a guy cutting through a 2x4 with his tactility and still slicing printer paper easily afterwards. Just don't ask me what he's saying because it appears to be in russian.

As you can probably see in the video this knife (although it'll stand up to it) is NOT designed for hard use. The man in the vid switches to wearing a glove on his knifehand within minutes. The grooves although they work great for traction, just isn't all that great when gripping the knife hard and you WILL develop blisters if you go out into the woods with nothing but this knife.

In the pocket it's great. The profile (slender) of the handle and the blade mean that it's not never really all too obvious in the pocket. And the thickness of the handle also means that you'll still feel it's reassuring presence.

The Deep carry pocketclip (which can be switched to left or righthand side) means that it's never a worry that you'll lose it.

The design is very, for lack of proper description, Japanese. And that can be a good or a bad thing depending on where your tastes run. For me that's a good thing. The styling of the blade and handle are very reminiscent of Japanese style swords and shortswords. I know I know. The point isn't the same. But it makes me think of that nonetheless.

The handle grooves while really improving your grip aren't all tha comfortable. You'll have no fear of losing this knife when gripping it. Yet at the same time I really wouldn't want to use it with a deathgrip for an extended period of time. It makes me feel like the knife it probably more designed with short burst functionality in mind....or self defense purposes. Which would make sense given the name "Tactility", tactical, covert operations, eliminations. They all just kind of lie in the same thoughtrange.

In order to improve grip even more there's some jimping on the liners alone. Now I'd never seen that done before but I really like it. You don't even really notice it untill you get a good grip on the knife. It's even to be found near the butt of the knife where your pinky finger normally rests. And since, when gripping a knife hard, almost most of the force it put near the rear end of the knife this makes perfect sense.

The tactility range is in Mcusta's midrange of knives. What this means is that although they're not the cheapest they make (that would probably be their "Basic" series in VG-10) they're not the most expensive either. You can find this knife in internet stores for under $120 no problem (if you're in the states). Which considering the fit/finish, size and materials used isn't all that bad. If you're feeling a little bit more fancy you can get versions with Corian handles, Cocobolo or Chinese Quince as well. And if you're feeling superfancy you can even find damascus clad VG-10 versions that don't have the thumbhole but a thumbstuf instead which range up to about $170 or so with that same choice in handle materials.

(Some pictures of various versions borrowed from Amazon.com)

When it comes to quality/price. I think this is one of the most overlooked GOOD knives.

Prices outside of the US are (as usual) a lot higher. (This knife goes for €150 or around $200 in a local store) and therefore when buying over here they might be a bit harder to justify. Because when you get into that kind of money the competition is just crazy. But even then it wouldn't be a  bad purchase.

And offcourse there's the cool fact that they come just CRAZY sharp out of the factory.....and dangit....now I want one of those damascus clad version EVEN MORE!!

You really outdid yourself with this review, my broster! I am familiar with the M Custa knives and have handled a few at the local brick n' mortar knife store at the mall. The ones that I have held were all very similar in shape and size to yours. And, they were also all very expensive! The pic you posted of the cocobolo and Damascus looks krazy good!

I really like the pocket clip on yours. That will allow for total concealment, buried deep into your pocket. It's a great feature!

Thanks Ron. I love that knife. The Damascus ones look amazing. And over at the local stores they're indeed VERY expensive. Like I said the one I have I bought (secondhand) for around $100 but they go for double that at local stores.

Better to buy on the web I guess. I suspect many dealers (bladeHQ, knifecenter etc) will have it a LOT cheaper.

Great review, Alexander. I like this knife, and after reading your post, I think I may grab one once money comes available,

Thanks guys. This is my only regular carry knife this size. They're really quite nice. I'm always surprised they don't get more of a following.

Well written and great pictures. I have to say I really like the placement of the pocket clip off all things. I have been increasingly dismayed at the propensity of clips to loosen and eventually fall off after intense use.

This is the first I have seen(there may be more) where the clip is attached at the top. That from a user perspective is interesting and may warrant a look.

And yeah. That Clip is great. So far I've only held ONE other knife with a clip like that and that's my A.G. Russell Titanium one hand knife:

And he redesigned it so that it would be held down by only ONE screw.

they are good knives overall. i just didn't like the comparison to a samurai sword... Since i know what they or really good tantos can do it just seemed liked a hype title to get folks to check out the review.

your review though was very good. congrats

Well that's a matter of taste I guess. They don't look like a sword. But to me the lines and styling are reminiscent to that.

Thanks, glad you like it. It's and excellent knife and I still carry it from time to time.

micarta is not Always the micarta that this micarta is ....  but this is fine micarta !!

i love mine su much i even got a second one  ( cocobolo ) from which i removed the clip and i carry it in an appropriate pouch  ( hard to find ! )   and take it fishing or camping like this

without clip the handle feels more comfortable  and looks even better

Great review Alexander.  I don't know that I have every heard anyone discussing Mcusta's here before.  They are great knives.  This one is my favorite, but not cheap and I don't think they make them any more.