This is an unusual picture.  I have many pictures of deer and several of coyotes.  But never both in the same picture.  In this one the coyote is apparently chasing the deer.  And it is a black coyote. 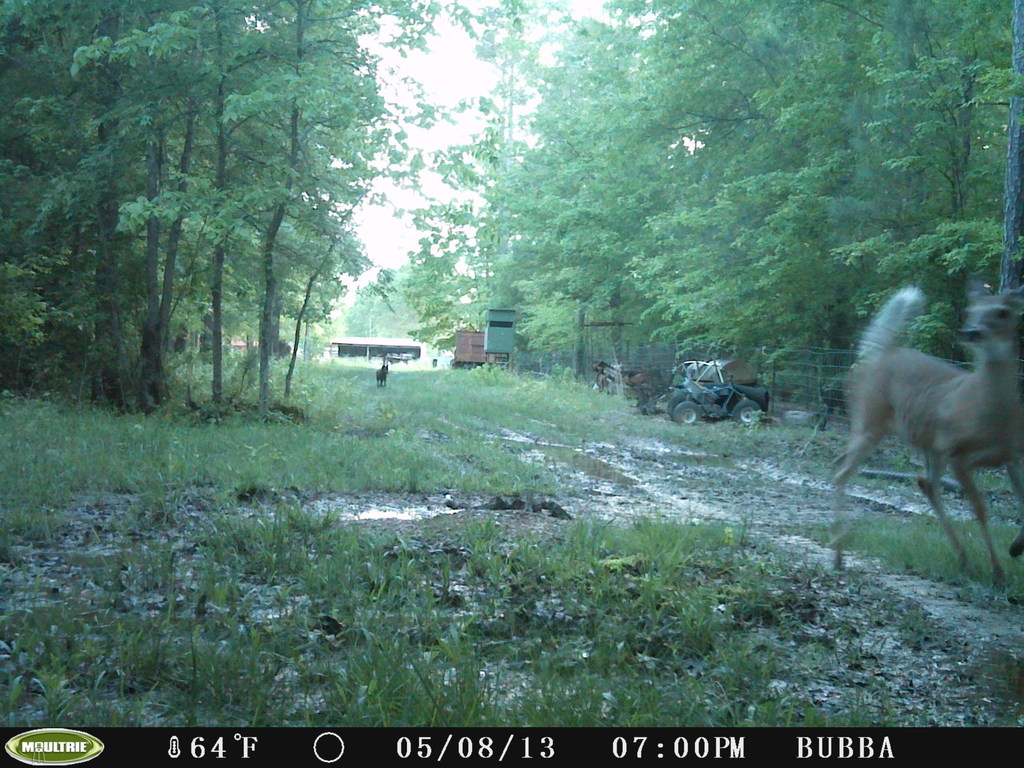 This doe is slightly pregnant. 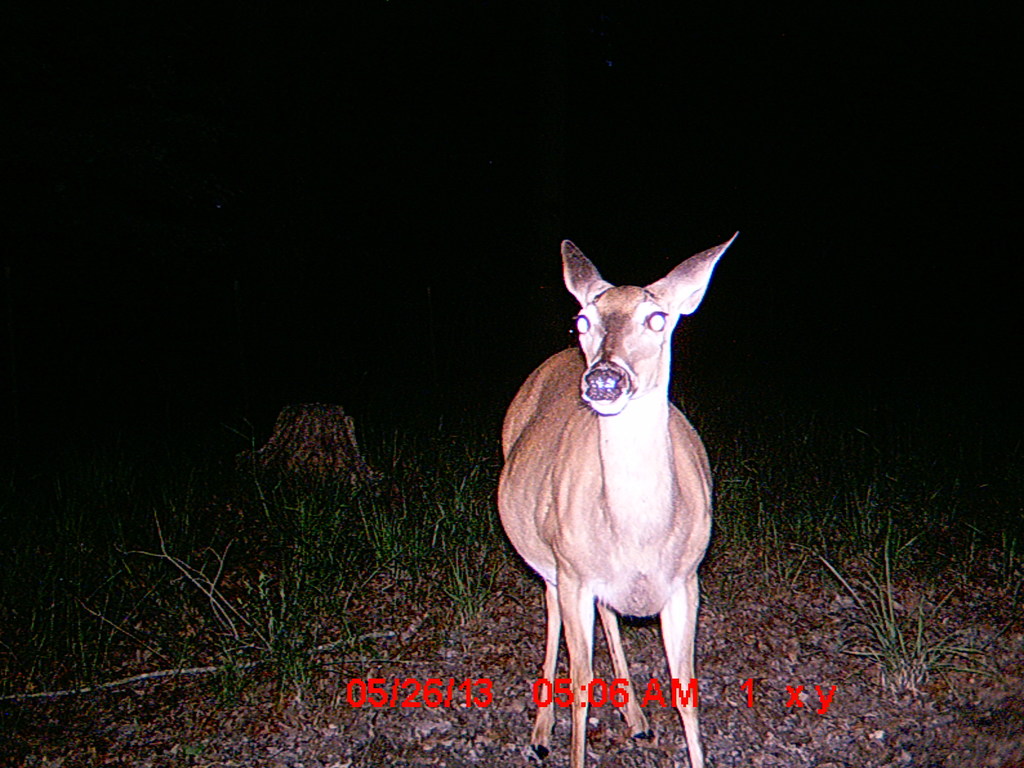 And the bucks are starting to grow their antlers. 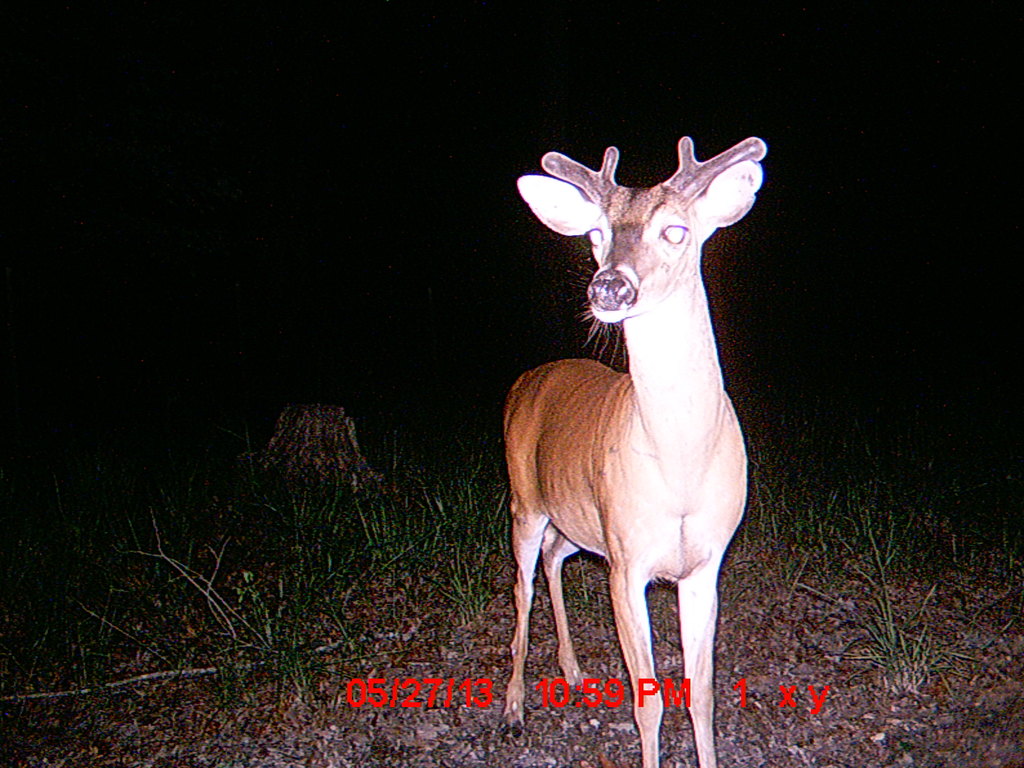 Great pictures, Charles. Let me tell you a little story about a Coyote, chasing a deer. Years ago [1975-76] I was hunting squirrels in Devils Swamp, near Baton Rouge. The month was October and it was warm and green in the swamp. I had been hunting that mourning along an old lake and had managed to bag a few squirrels. Well, I had seen a big ole black fox squirrel feeding in an Overcup oak tree but he had noticed me to. So I leaned against another old tree and started to wait him out. After a few minutes had past, I figured he was too smart and wasn't gonna move again. When all of a sudden I heard something running through the woods and headed straight for me. Soon it appeared, it was a young doe, running wide open, as fast as her legs would carry her. I thought to myself, what could make her run like that? My answer was soon to come, it was a big male Coyote. I heard the deer hit the water in the lake, so I knew, she was safe. The Coyote, did not share her luck that day. He ran the deer trail after the young doe right beside me, well my 12ga. loaded with #6 shot was enough to put an end to this deer varmint. I hope ya'll enjoyed this little hunting story. There's more to the story but I won't tell the rest unless Miss Jan ask me to. You kinda get a laugh at my expense, if I go any more.

Well now, you know I gotta hear the rest of this story please:)

and yes I have enjoyed this part it very much

I want to hear the rest of it too!

I'm glad ya'll, enjoyed the coyote story. Before I go any further, I know Miss Jan knows my nickname but the rest of ya'll don't. So I'll take a little time to tell ya'll about my nickname. Now days, they call me Pawpaw Coyote, when I was a young man [around the time of our story] they started calling me the Coyote Kid. Now, that ya'll have learned about that, I finish the story.

The second, I finished shooting the Coyote, the squirrel made a break for it, I shoot a double barrel shot gun and I had used both barrels to bring down the Coyote. I began fumbling around in my hunting vest pockets for more shells and quickly reloaded. I was young and reloading in a hurry was something I was good at. I through up my gun to my shoulder and tried to follow the big black squirrel for a decent shot. Had he not stopped and took a glance at me, he probably, would have made it. The stop and glance was all I needed to deliver a deadly shot from my old squirrel gun.

It was still a little early, so I hunted along the lake for while longer. I was able to pick up one more squirrel before I started heading back. As, I walked along, I started thinking, "the guys back at camp, will probably not believe me about the coyote". Heck, it was only about 150 yards from the main ATV trail, I know what, "I'll carry it to the trail and they can come back later on an ATV and see it or get it, whatever.

When I arrived at the Coyote, I thought it had move a little, but naw, that's where it was. I started trying to figure the best way to carry it. I had a shotgun and a hunting vest full of shells, canteen, snacks, bug spray and 5 big Fox squirrels. The idea came to me to put it around my neck, front legs on one side, and back legs on the other. Both in my front, heck I only had a little ways to go. So, I loaded up the critter and started to make my way, but after only a few steps, his nerves twitched, and oh my, what went through my mind at that moment, [I can't repeat] I thought he wasn't dead and was around my neck. The Coyote went one way, the gun went one way and I went the other. The only problem was the way I went was straight in to a large mud hole. So here I am, laying on my back in mud and water, in Devils swamp, a place full of Water Moucasin. I jumped out that mud hole with record speed. I checked the Coyote and it was dead, it was probably just his nerves. I said to heck with Coyote, if the guys want to see it, they can come look for themselves.

When I finally got back to camp, everyone saw that I was all wet and muddy and wanted to know what had happened. I told them what had happen, after they were finished laughing, [no their still laughing] they took an ATV and retrieved the Coyote.

I think my picture proves they do!

We get Deer passing through our backyard. Can't ever get a picture of them......they're camera shy.

You might set up a trail camera.  These pictures were taken by a couple of my trail cameras in my hunting area.  You might be surprised what you get pictures of.  Besides deer, I have gotten squirrels, possums, raccoons, foxes, coyotes, and a bobcat.  Oh, I almost forgot, an armadillo.

We get Deer passing through our backyard. Can't ever get a picture of them......they're camera shy.

We get a lot of critters too even though we are actually in Raleigh City limits! But we have a N.C. Greenway behind our property.

Years ago, when my wife and I were young, we went to North Carolina on a vocation. We thought it was the most beautiful thing we had ever seen. I hope it's still, very pretty.

One other thing I just remembered getting pictures of a couple of years ago, a poacher!

They sure do Charles! if they can take them down they will! I have seen them chase after goats! We run livestock guardian dogs though and they give them a run for the money!

I think my picture proves they do!

anders sundby braathen is now a member of iKnife Collector
12 hours ago
Welcome Them!