Is it just me, or do you too find yourself looking at the pictures posted and you think to yourself "What brand is that?", "What handle material is that?", etc.?

I think it would be really nice if when posting pictures, a little bit of information with them would be really helpful, at least in the title of the photo, especially for people that haven't been collecting very long...and for us old time collectors, it would help too!

Just a friendly suggestion. What do you think?

And if the knife is unbranded and you don't know where it was made you can let us know that, too!  I love pictures but I also like to know what I'm looking at!

I agree 100%. I always name my pictures...it's not all THAT much work and makes it soo much more pleasant to look at them because then at least you know what you're looking at.

Thank you! I agree and always am after members to post the Brand or name  of the knife in the title. Then put some information in like steel or the pattern number if you know it. Handle material is good too as sometimes its hard to tell what it is we are liking.  Gosh, I like as much information as possible and after all these are your pictures of your knives! You can look at them all day on your My Page!

I agree wholeheartedly- I always put as much info about my knife pics as I can- If you ever have to refer to a pic, much easier to find-Trying to refer back to a photo even  by some of our top posters is an almost iimpossible task when listed as img. with a random set of numbers or some other random alpha-numeric combination-Try finding a knife you have seen before on this forum, if you don't remember just where or who posted it--IMHO

Yep, John, i know I'm guilty of putting up IMG_4322.JPG, etc.  I often get tired of renaming the image file because I take so many pictures.  But at least I describe and title the images I put up in the text of the post.  I'll need to work on the other part.  Heck, I can't even find most of my own pictures even though I describe them.

For those who don't understand what John was saying,  Take a look at the knife below (IMG_2068.JPG) 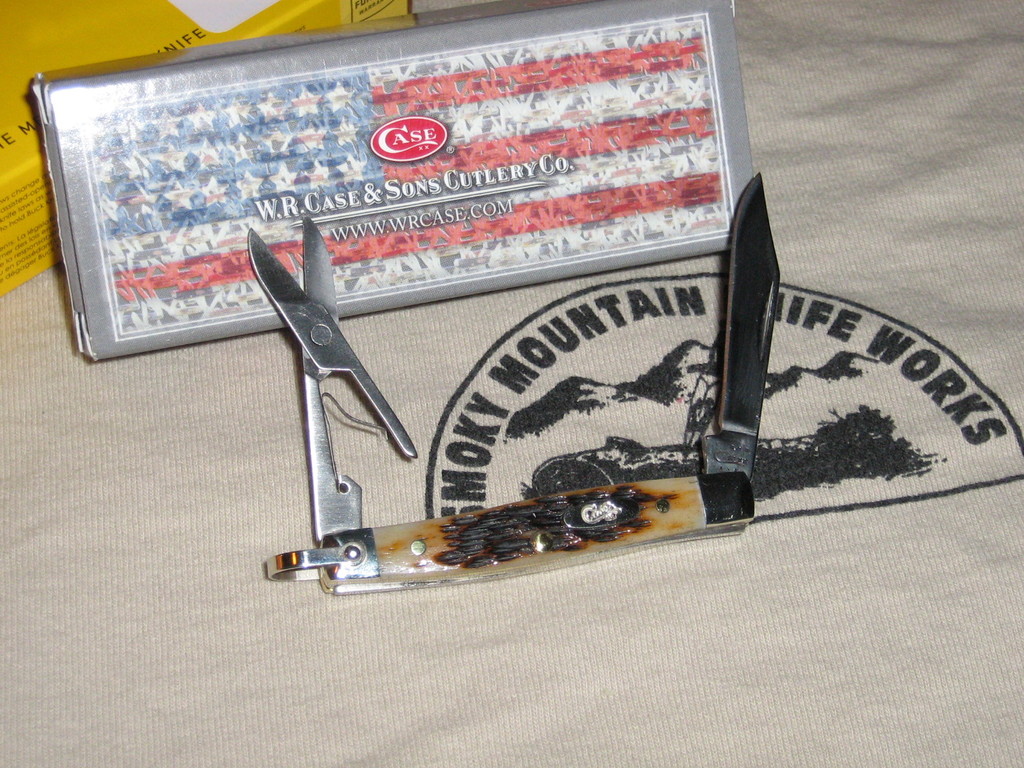 You're going to have a hard time tracking that one down.  If I rename it case-penknife-scissors.jpg  You have a chance of finding it again later.

And then if I describe it in the text of the post  things become even more enjoyable to the person who is reading the text.

I bought this beautiful Case Amber Jigged Bone Pen Knife with Scissors when I was visiting SMKW.  I had admired it online for sometime but wasn't sure if I would like it.  It is somewhat small. (2 5/8 inches 6.5 cm) but as a collector of Pen knives I had to have it.  The scissors could be better but I really like the bail.  Just a really cool knife.

Obviously, every picture post doesn't need to go into that detail but maker, pattern and size are always highly valued!

I always put a title on my pictures themselves, in part for my information when I store them in their respective "knife folder" on my computer. I don't want to go back and look at a picture and ask myself what in the world the name of the handles were! I need to do that at my age now! LOL! And then when I post the picture I, at least, put a simple title that tells basically what it is; "Case Trapper Crimson Bone"

I have tried to label all my pics just so they are easy to find.

Time to roll this one out again! Take a look at the leaderboards and exactly what are all those numbers on the photo Title? Use that instead to name the knife! Much more fun to look through and quickly ID what you want to see! Thank you, OK I will get off my box now

Thanks Steve. You're right, those numbers don't tell me a thing!

Everybody, just for grins and giggles I just did an IKC search for "IMG"- As of 7-30-14. there are 3033 pages !! Happy hunting if you don't remember exactly where or who posted it !! Try searching for a random number sequence, if you think you will have better luck !! LOL