Okay, I know I usually answer these sort of questions, but this has me puzzled. Perhaps someone recognizes this old gem. I paid $15 for this at an antique store.It has no markings what so ever, and carbon steel blades.It has the same handle length, profile, and overall look as a military issue MIL-K818 knife except for a few glaring differences.The military version had 4 blades and a bail, marked on the handle in the center with US or the military branch as they were issued to USMC, Army, AF, & Navy since WW2..Mine has the same handle minus the military marking, never had a bail, but has a similar  main blade and punch blade.The secondary blade is a puzzler. Either an odd blade or reprofiled. It was definitely sharper than the main blade.These were made for the military by a host of companies--Kingston,Stevenson, Ulster, Imperial,Marbles & Camillus that I know of.In addition, this is a 3 blade knife, & all military versions I can find were 4 blade.Any insight welcome.The pictures will show mine first, and an example Camillus military version second. 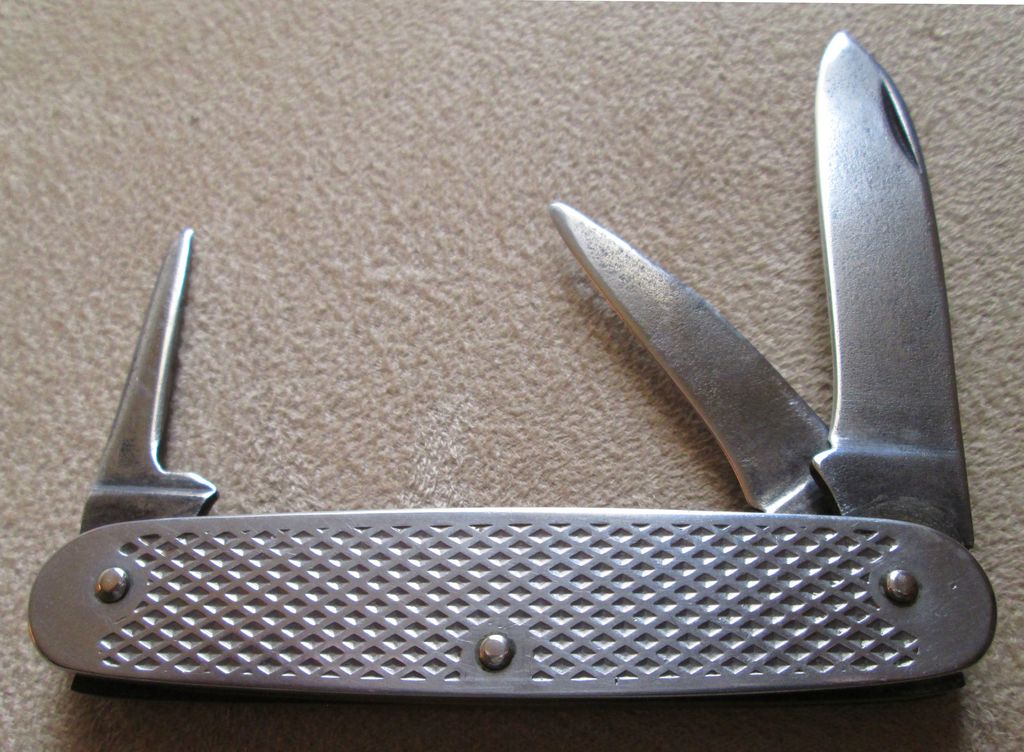 Okay, I've seen similar knives with bid spear master and smaller pen blade with a punch.   I've also seen them with just a two blade spearmaster and caplifter/screwdriver blade.  They pop up on eBay now and then.   I know camillus mafe knives in both the two and three blade versions; often marketed under the Camco brand.  It only made since to capitalize on the the popularityt of the Mil-K knives thaty were making for the government.  These other ones I don't beleive were made for the government but just shared the very cost effective scales.

Not sure if yours was camillus made or was just some other company making copy cats.  The two and three blade knives often lacked the bail.

The bottom one yes but I've not seen any information of the three blade variety being an issued item.   That said, the Army Air Force was issued and three blade stockman knife during WWII.  It had bone and later plastic handles.  So i'm never one to say that this knife was not an issue item or made available through base/post exchanges.

I found these great pictures of the British issue versions at BritishBlades.com.  Note that the 3 blade models are all Navy style knives

On the left going down:

The left hand knife top row is 1943 (without bottle opener), centre top is 1946, and the right hand one is dated 1950, this is the latest British date I have seen on this pattern, although the Dutch made a copy that was manufactured well into the 1950's.  The bottom knife is Canadian, and though it is based on the old British pattern that was made before WW1, it is in fact post WW2.   Made by Case, it is a 1948/49 model M346, used mainly by the Canadian Navy.

Featureddead_left_knife_guy left a comment for david moore
9 hours ago

Featureddead_left_knife_guy left a comment for Chris Sparks
9 hours ago

Lars Ray left a comment for david moore
15 hours ago

Lars Ray left a comment for Chris Sparks
16 hours ago