I'm dealing with my knife slump by building scale models, in this case, monster models.  Some are re-releases of the old Aurora kits from the 1960s but some are newer kits by upstart comings. I guess I'm still a kid at heart. I built the Creature about 15-20 years ago.  I finished the Mummy last week.

Working on the Forgotten Prisoner, now.  Then there is another 20-30 kits that I've acquired over the last 30 years that still need building. (and that is just the monster models)  I've probably got a 100 or so military models that need building.  Anyone else out there build kits? 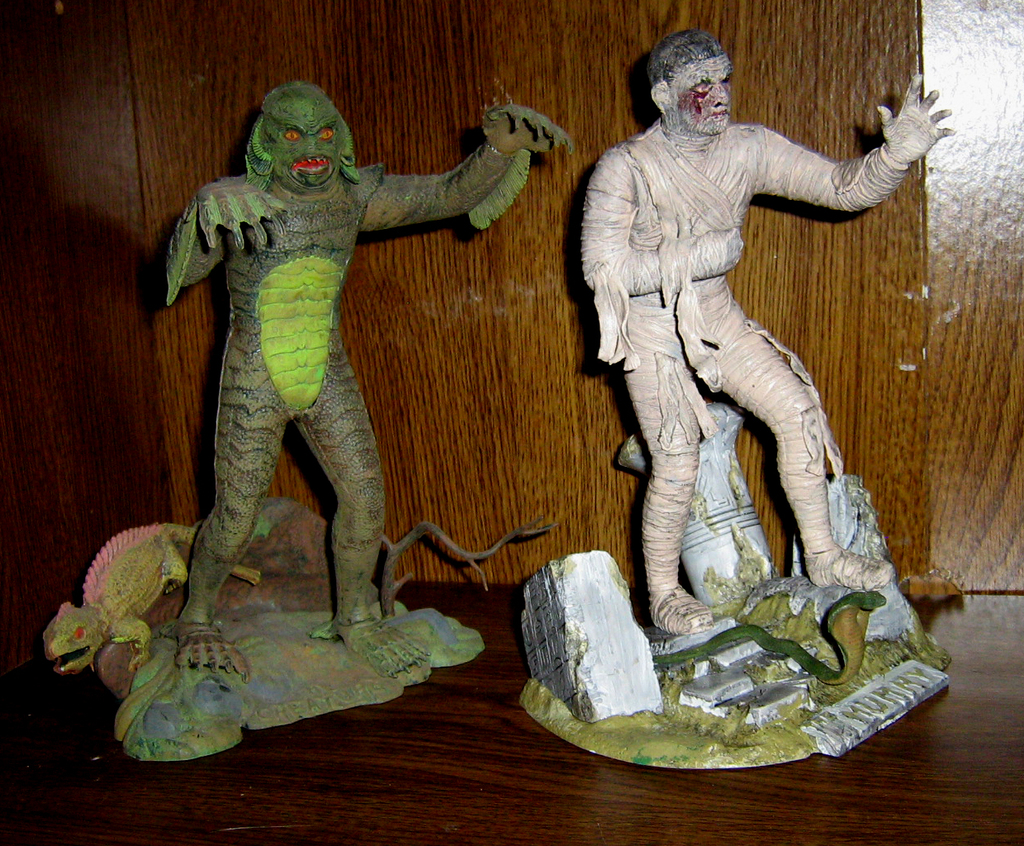 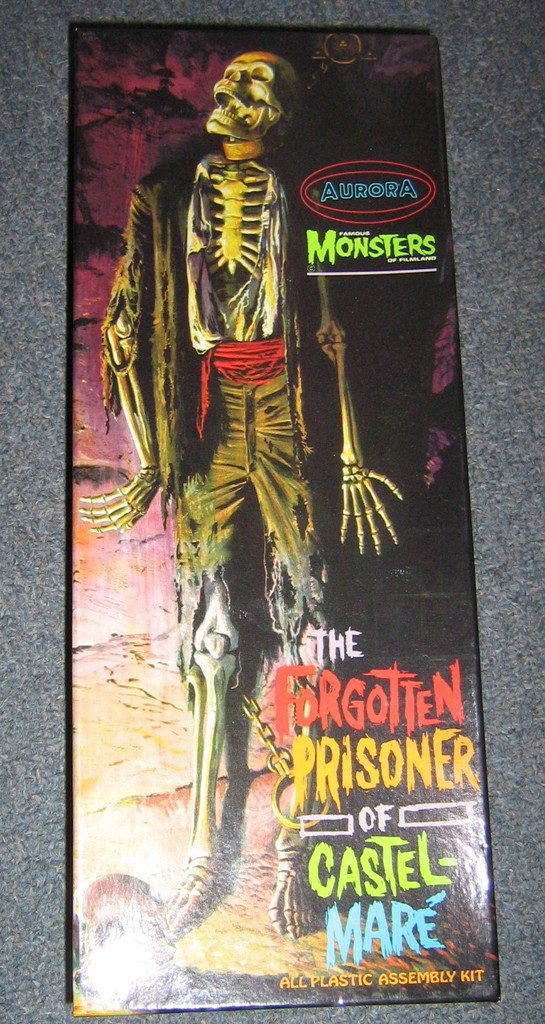 Now that might be an interesting way to get the knife jitters to settle down.  I would guess you use a knife while building?

I'm also working on a somewhat ambitious King Kong T-Rex kit-bash based on the the classic 1933 movie. That one has involved the use of a hawkbill and whittler pocket knife already. 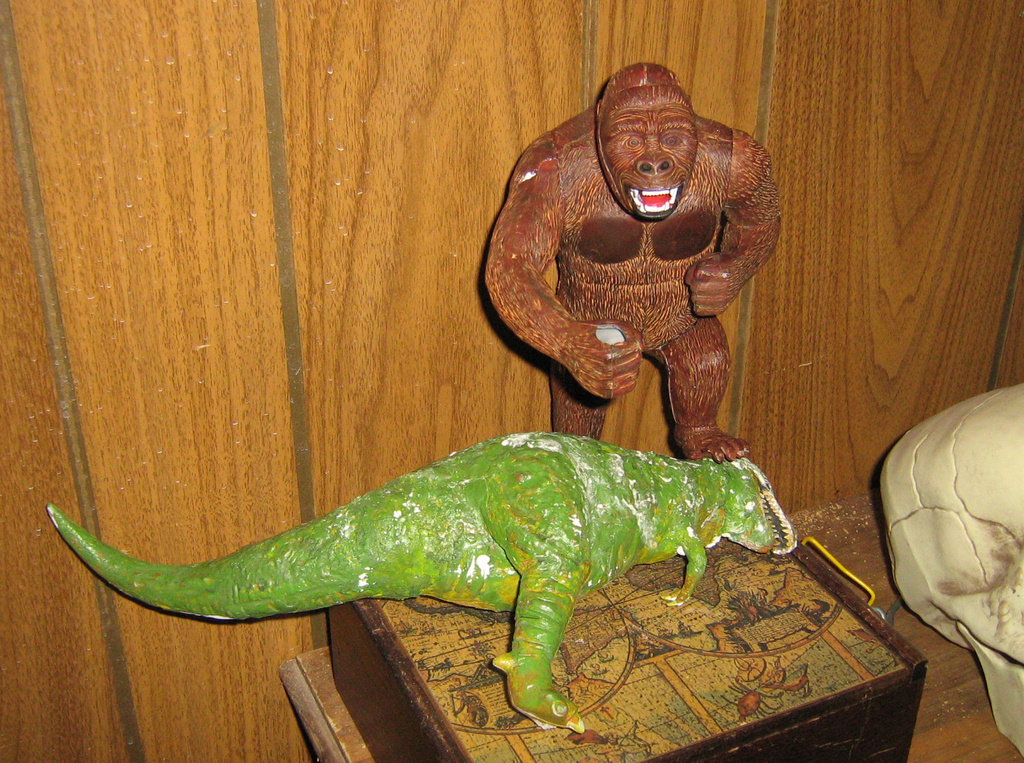 Eventually I will need to build the base and make the trees and such for a rather complicated jungle scene.  I also need to add Ann Darrow/Fay Wray.  The 1933 version of King Kong is one of my all time favorite movies.

And Merian C. Cooper, the the writer, director, and producer of the film was a fascinating man.

He Quit the Navy Academy in 1912 and joined the National Guard and in 1916 volunteered for service against Pancho Villa. He was a American pilot during WWI (Flying two seat observation/bombers)  After WWI he Joined the Kościuszko Squadron a Volunteer air force supporting Poland during the Polish-Soviet War.  In both wars he was shot down and taken prisoner.  He managed to escape from the Soviet Camp and walk to Latvia and Freedom. When the Soviets captured him he was able to hide his identity as an American Volunteer pilot.  Had they known he would have been shot on the spot for the reward money!

Later he helped for Pan-Am airlines.  He was helped with numerous advances in film technology such as technicoler  bring Cinescope (Wide Screen) films.  During WWII he re-enlisted in the U.S. Army Air Corps serving in India, Burma, and China. He actually developed the routes and often flew missions over what was known as the "Hump", the flight over the Himalayas.

There is a point in the 1933 King Kong where Carl Denham says:

"Ever since a trip I made to Africa. I'd have got a swell picture of a charging rhino, but the cameraman got scared."

This actually refers back to an earlier film Cooper made called "Chang"  Cooper need a shot of a Tiger trying to climb a tree to eat a man.  He couldn't get anyone to do it so he climbed the tree and they let the Tiger out of the cage.  The tiger got so close to the lens that at one time his breath fogs it up!

In anther scene where Denham says the critic panned his last move because it didn't have a love interest.  This refers back his earlier movies, Grass  and Chang which were docu-dramas before the term was ever used.

Oh well, more that anyone probably wanted to know.

JJ, I recall those days.  I had a model of Luger (Artillery Version), an M1911 .45 automatic and several old flintlock pistols.

You can still find the 1/1 flintlock pistols floating around.  I have 1/1 Blunderbuss to build. Another one I need to get to.

I used to build models Tobias.  A long time ago.  I did mostly ships like The Constitution, etc.  I enjoyed putting great detail into them but I doubt I would have the eyes for it anymore.  It sure is fun though.  You do great work!

Thanks for the compliment, Data, I know what you mean about the eye sight.  This is why I rely on a lighted head magnifier.  I think the worst part is the Carpal Tunnel, it is hard to paint small items when your hands start to cramp up and go numb from holding a brush. I was hesitant to start up again because I know I can't build them as good as I used to but then I decided I can still build them.  I might not win a contest but then I never built them to win contests to begin with. It is just something to to do. Idles Hands are the devils play tools and all.

Surprisingly no.  Do you have a recommendation?  I hate spending a hundred bucks or so only to have a piece of junk in the corner.  I have asked about air brushes in a number of circles so far the only recommendation I've got was an Testor Azteka 270.   Growing up, the word was Pasche makes the best brush and steer clear of those by Badger.  But now I see Master and Testors on the market and I'm not even sure if those are the same company!  People argue about using them for decorating cakes and body art  vs plastic, glass and other surfaces.  The air brush wars among scale modelers is very confusing.  They argue over them like knife collectors debate steel.

Tanks l.lantz.   Many years ago, I came across a copy of the script for the original King Kong in book form at a Library. The book had a introduction about the writing of the script and in that introduction it discussed some of the exploits of Cooper and Schoedsack.  I was fascinated by these two men, especially when I read that the Carl Denham character in the movie was based on Cooper.   I did a quick search on Merian C. Cooper and found a couple books which I quickly read. He remains a legend in Poland  for exploits as an American Volunteer pilot. The 7th (Kosciuszko) squadron was in some ways similar to the Flying Tigers during WWII except they were primarily used in the role of ground support and as fighter bomber duties.

The Amazingly True Adventures of Merian C. Cooper & Ernest B. Schoedsack, the creators of King Kong  by Svehla, Susan

Cooper and Schoedsack are the two men flying the plane that actually shoots Kong off the Empire State building in the 1933 movie.  In homage to Cooper, Peter Jackson shaved of his beard  and plays the gunner of the plane in his version of the movie.

J.J. Smith III left a comment for Matthew
21 hours ago