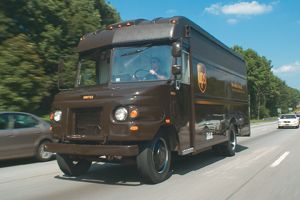 The company is also raising its air and U.S.-origin international services rates by an average 4.5%.

UPS’ next day, second-day air and three-day freight rates for shipments within and between the U.S., Canada and Puerto Rico will also rise 4.9%, the company said.

UPS Inc. is ranked No. 1 on the Transport Topics 100 listing of U.S. and Canadian for-hire carriers.

This could affect many of us, we need to think about who our dealers use to ship to us

Go ahead world, nickel and dime me to death. We're taxed on our taxes, you can barely afford to buy food, certain people want us to pay European gas prices......now I have to pay more to get what makes me happy. Oh poo.

I still prefer the Post Office...    Me too 100 percent regaurdless of the cost UPS just throws mine on the porch. I personally know my mail Lady, Guess that makes me bias...

In related transportation news and to appease those "I want It Now" knife buyers:

WASHINGTON — Emboldened by rapid growth in e-commerce shipping, the cash-strapped U.S. Postal Service is moving aggressively this holiday season to start a premium service for the Internet shopper seeking the instant gratification of a store purchase: same-day package delivery.

Teaming up with major retailers, the post office will begin the expedited service in San Francisco on Dec. 12 at a price similar to its competitors. If things run smoothly, the program will quickly expand next year to other big cities such as Boston, Chicago and New York. It follows similar efforts by eBay, Amazon.com, and most recently Wal-Mart Stores Inc., which charges a $10 flat rate for same-day delivery.

The delivery program, called Metro Post, seeks to build on the post office’s double-digit growth in package volume to help offset steady declines in first-class and standard mail. Operating as a limited experiment for the next year, it is projected to generate between $10 million and $50 million in new revenue from deliveries in San Francisco alone, according to postal regulatory filings, or up to $500 million, if expanded to 10 cities.