Hey everyone sorry for not commenting that last few weeks. I have been working on the knives beleve it or not. Yes we should have are first knife out in the next 2-3 weeks (if there is no road bumps) It is as you all know the Lock Back Trapper with Amber India Stag with a production of 50 knives. The dealers that will selling them is myself, Greg Holmes at TSA Knives, & Ken Mundhenk Blue Creek Cutlery. There are only 50 I know I have some already spoke for so if you want to get one please go ahead and reserve yours. The knives will be coming in tubes with the Label above and come in a black velvet pouch and a certificate. The knives will have no blade etches or serial numbers . I have also been looking at everyones suggestions for patterns and I like them all some are ones we were already planinng to do but sorry to say none metioned below will be in the next few patterns which we already had working into motion. I am still working on the webpage should have it up in a few weeks I will be bringing more information as I get more info right here. Thanks again everyone for joining and sorry I haven't made this active enough but I will be growing every week. Thanks again 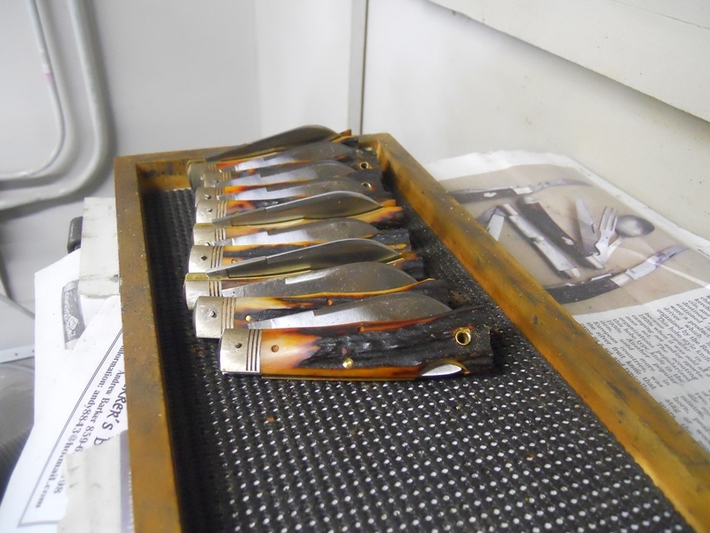 I just got this beauty today in the mail...love it 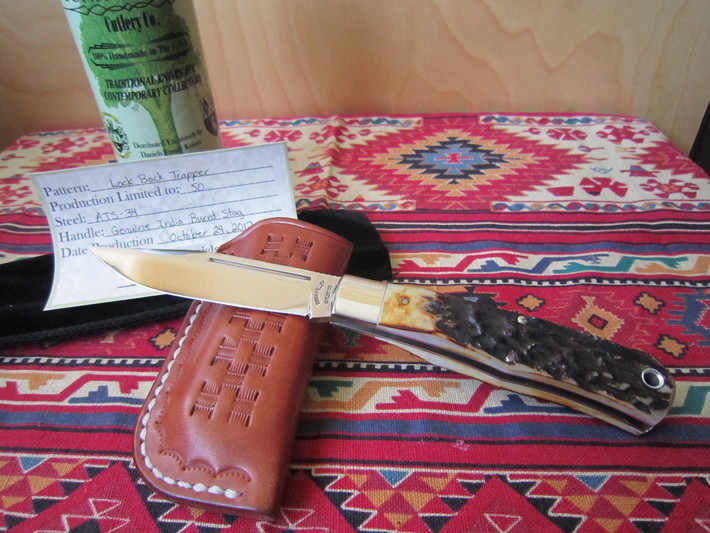 Well this was the first...but it won't be the last that is for sure!!! Just love everything about the lock back...gives me that traditional style that I enjoy...nice healthy Stag...now I am going to hunt for a MOOSE!!!!

Yes, I have recently released the newest Ivory knife in the Sway Belly Trapper. Also, the large Coke Bottle in Burnt and Amber Stag. Check the web page at www.danielsfamilyknives.com.

I will be attending the Easton, PA show this coming weekend September 28th and 29th. I am looking forward to showing these new patterns off and hopefully see you there.

Here are some production shots of the ~NEW~ Oiseau Metal Arts Tadpole being made. 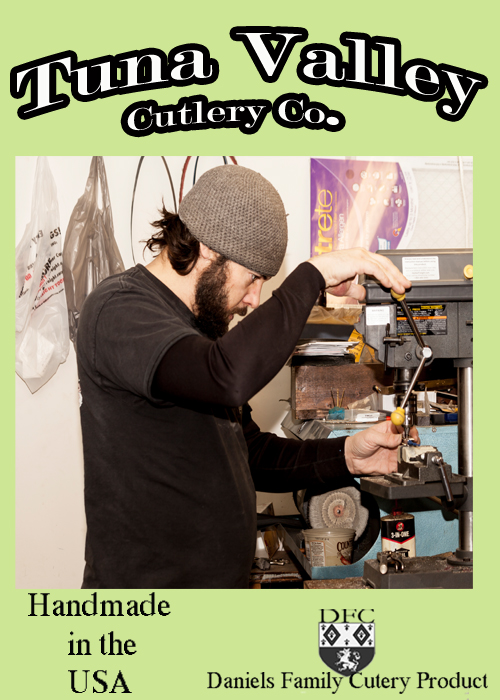 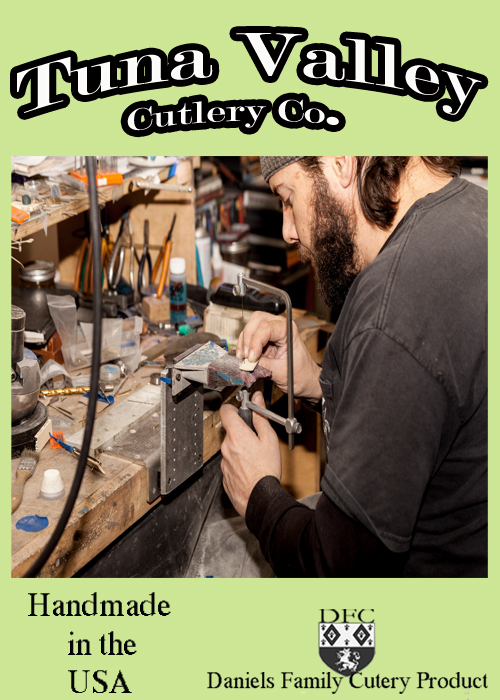 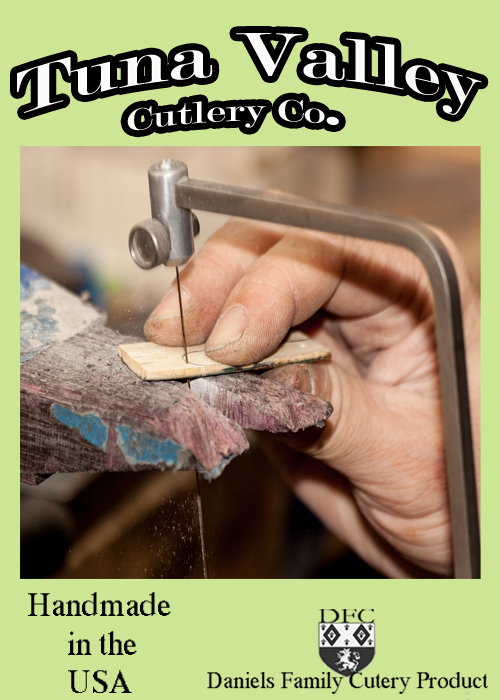 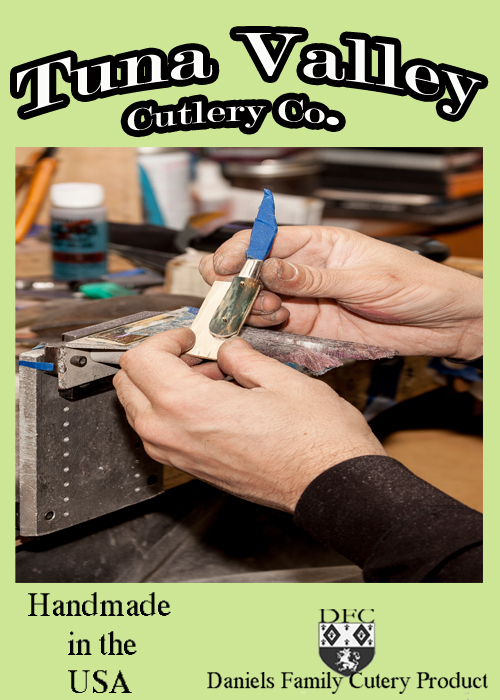 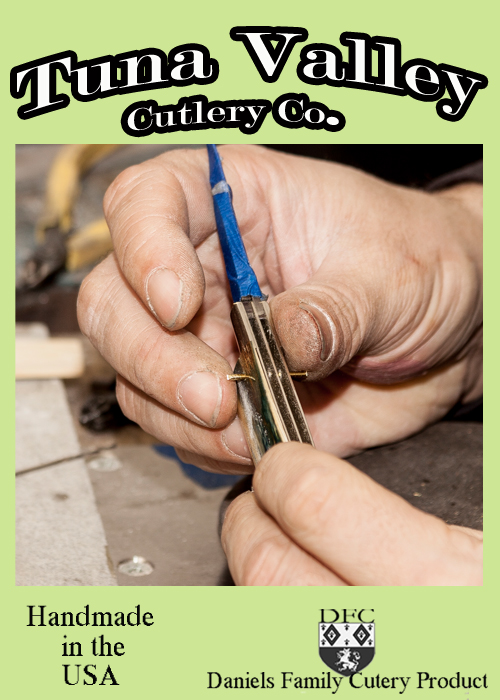 Pictures from the weekend in Dalton, GA 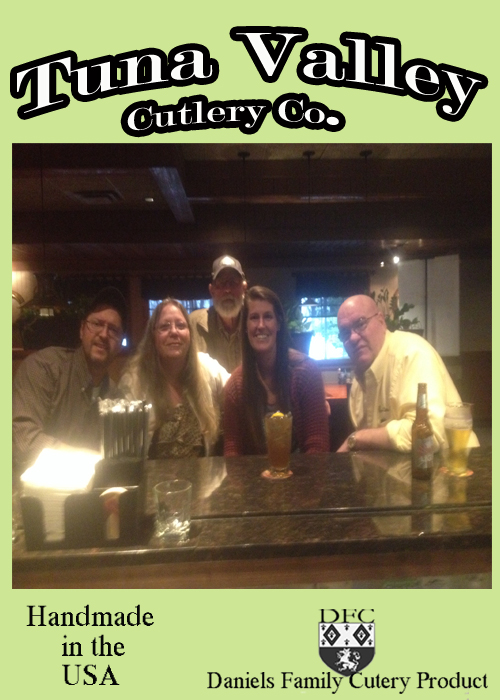 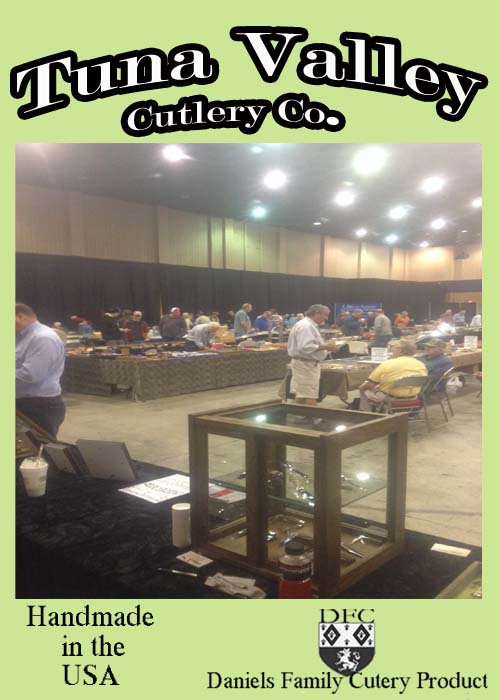 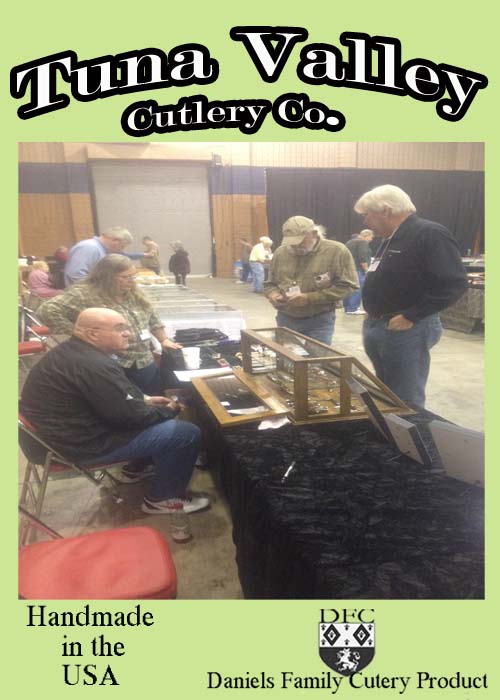 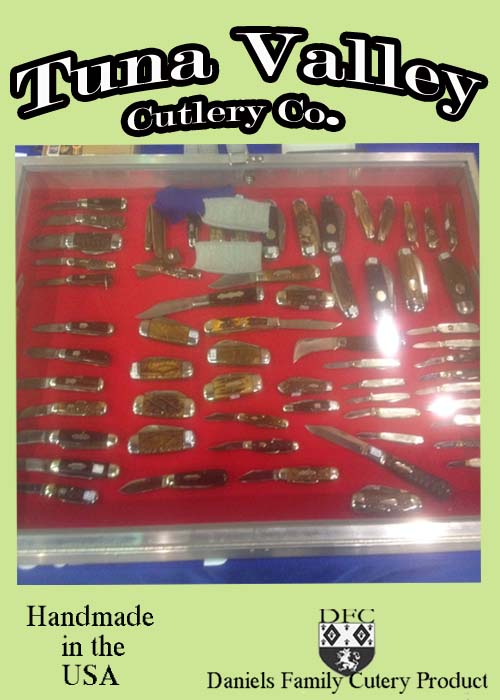 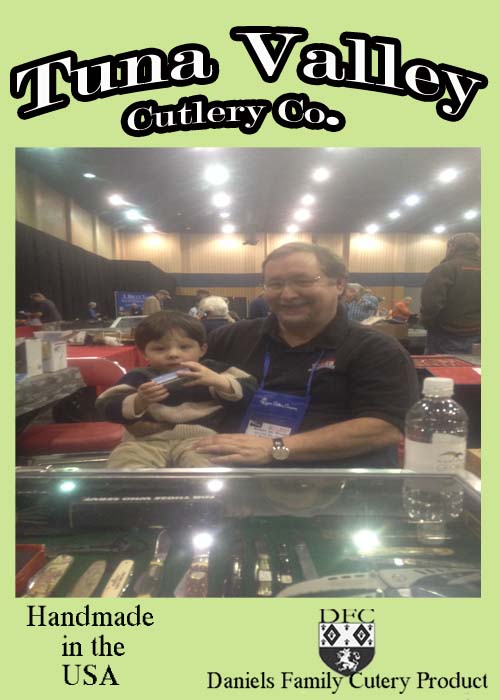 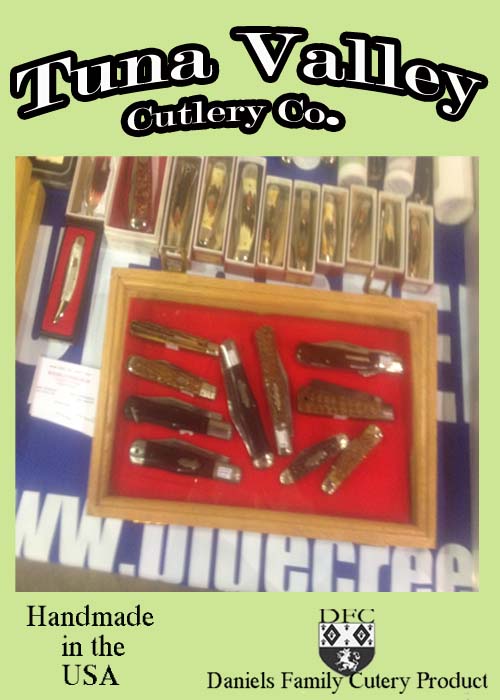 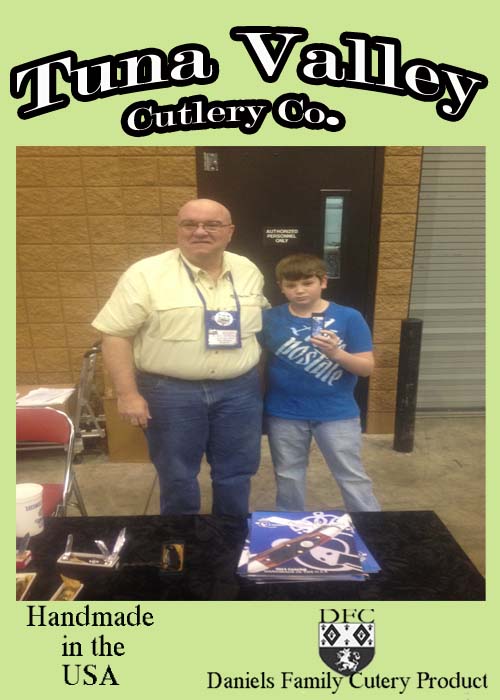 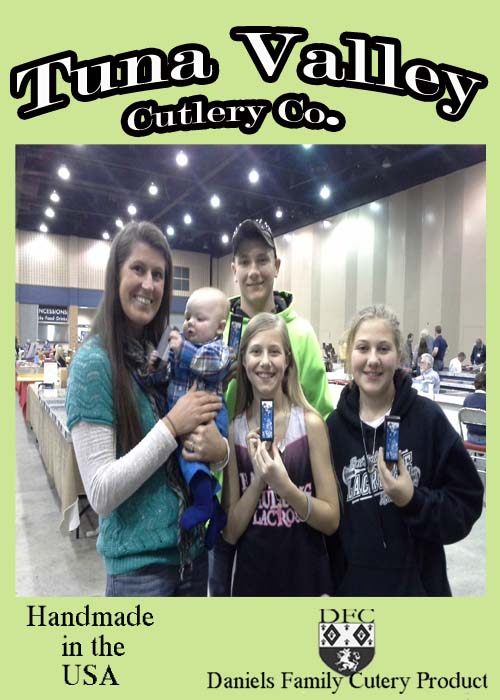 The TVCC Mammoth Ivory Gunstock limited to 25 knives with Oiusi Leaf Art work on the Bolsters , was , I say WAS beautiful they are all gone , but there are still the fish scalers in Buffalo Horn limited to 25 knives, and the Awesome Amber Burnt Stag , and Beefy Burnt Stag handled knives left limited to 50, these as always are pure handcrafted art. 154CM steel... Courtney did a awesome job again!!...

Hello, my name is Courtney Daniels and I am the proud owner of Tuna Valley Cutlery Company. I have been the owner for three years now, since 2012. Previously owned by Perry Miller who produced this line in 2010 by Great Eastern Cutlery. Then my husband Ryan Daniels and his father Ken Daniels produced a few runs in early 2012 before I took the line over. Since then I have taken the line over and the product has been produced solely by Queen Cutlery Company.

I've not always been into knives. I didn't grow up around them or go to the trade shows. I married into the knife industry when I met Ryan, my husband. At first, I tagged along with him to flea markets when we first met and watched him buy and trade. Then when we got married and started a family, that's when we started going to more knife and gun shows, which I sat back and just watched. The more I watched the more I began to know and pick up on. I was surprising myself when I was able to answer customers questions. How and why do I know this stuff? Before I knew it my husband and father-in-law where leaving me alone at the table so they could walk around. This meant I had to become more familiar with the product and pricing.

Once I took on the Tuna Valley line, I became even more interested in how the product was made. I started going to the Queen Cutlery factory and began learning different stations and steps in the production manufacturing process. I don't think a person realizes the varies steps and hands on with different people touching the knife multiple times before the knife is complete. After learning the process or taking a tour through the factory you look at a knife differently and have more respect for the final product.

My Tuna Valley line is a limited line. I currently come out in each pattern with: 50 Burnt Stag, 50 Amber Stag, 25 Buffalo Horn and then 25 Fluted Mammoth Ivory with Engraved Bolster. All are limited to this amount and will not be reproduced in that pattern ever again. They are made with 154 CM steel as well. The knife comes in a velvet black pouch inside a white tube with a certificate that has the release date of that pattern and a signature by me.

Be sure to like my page for future news, releases, & my new journal that will document my apprenticeship at the factory

I know there is a New Timekeeper coming out very soon! looks like it will be a SCOUT Knife! Will be very Cool!  Also made in very limited numbers!

GET YOURS BEFORE THEY ARE GONE FOREVER!!

These knives will be arriving very soon! This is a very limited run and will disappear

very fast. Here is a Sneak Peak Photo of them.