Production numbers, do they matter?

I read this today

As of today, 10 December, 2018, the total orders from GEC distributors
and dealers for the #97 pattern are approximately 5,200 pieces.  That is
a substantial number of knives.  With 5 different handles it is roughly 1000 pieces

of EACH handle material available.

Hmmmmmmm., One of the reasons we bacame hooked on GEC was the low run numbers.  The quality goes without saying but being able to get 1 of 25 or even 1 of 50 is pretty exciting this day in age.  So I am just wondering, will 1 of 1000 mean you looking at the knife as just a user now and not a collectible?

Does it matter to you?

Does it mean my safe full of 1 of 5 or less is going to be more sought after?

Tags: Production, do, matter?, numbers, they

I read that too, my immediate reaction was "good, maybe the prices will be more reasonable on a GEC knife". At the same time, from GEC's view it means they will keep their doors open and their employees will still have a job. Personally I think they want to move to production of regular "user" knives and reduce the number of SFO's they produce so they can stay in business, this SFO thing put prices well beyond what the every day person could spend on a pocket knife, so I see this as a good thing for GEC, and a good thing for the cutlery industry.

My main concern with higher production numbers would be the possibility/probability of lower quality knives. Unless, of course, their quality control standards were strictly followed and enforced. That's hard to do though. And, Syd is absolutely correct regarding the prices of recent GEC SFO's. Especially on the secondary market. I'm watching single bladed Tidioute SFO Barlow's commanding prices approaching $500 on the Evil Bay. It's mind-blowing! Certainly above my pay grade.

I've got a different perspective -- not necessarily an opposing viewpoint, I'm just coming from a different place.

The hand-made knives are ultimately either one-offs or made in small runs by necessity.  In the case of the latter, production numbers are likely to mean quite a lot from a collector's point of view, both on the secondary market & for the original buyer.

Maybe it's because I'm from Generation X, maybe it's the fact that I'm not much of a classic pocket knife pattern collector, or maybe it's just my personality, but having small production runs for the sake of artificially maintaining something -- collectable status, price-point, exclusivity, or whatever else -- seems, well, artificial.

For what it's worth, I seem to recall Queen having some quality issues, even in small batches.  I'd hate to see GEC go under the way that Queen did.  Without knowing anything more about the GEC situation, I'm guessing they're doing it to stay afloat, especially with the younger generations not being as willing, or as able, to purchase a $100+ pocket knife.

It may be that dropping production numbers or increasing batch sizes would have the opposite effect, I don't know.  But as GEC knives seem to be marketed toward an ever-shrinking middle class, I can see why they would be considering ways to make a lower-priced knife.

Well we seem to have a few different thoughts.  To be clear, I do not know that producing this knife in these numbers will lower the price point at all because the silly pricing has been secondary market prices not MAP pricing. Keeping the doors open does not seem to be an issue.

I can tell you that Bill Howard, the owner and head knife maker/designer at GEC has said from day 1 that he wanted to make knives as users not collection pieces.  That is just who he is.  Those of us collecting forced that mantle on him and his company.

I do hope the quality remains.  I think it will be interesting to see what happens to the values of the earlier, very small, well documented runs and the past 2/3 years of SFO's that have commanded high dollars on the secondary market.

I just spotted a maroon micarta GEC#97 that sold on EBAY for $147.50 plus shipping.  The GEC #97 Alleghany knife 4 3/4" closed is the smoothest production Hunter style knife ever.  I own 2 with 5 pre-orders on the way.  Sweating it out on that Stag Sambar knife.  The Beaver Tail Brazilian cherry-wood with beaver shield is already sold out at Collector Knives. CKs is the biggest GEC dealer with there pre-order online service.  The Autumn Gold bone , Texas Yellow Rose , and African Ebony wood Northfields are still available for pre-order.  The GEC#12 Toothpicks are next for production.  The green camel bone toothpicks GEC#12 knives, are going to be killer. 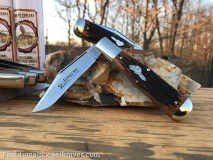 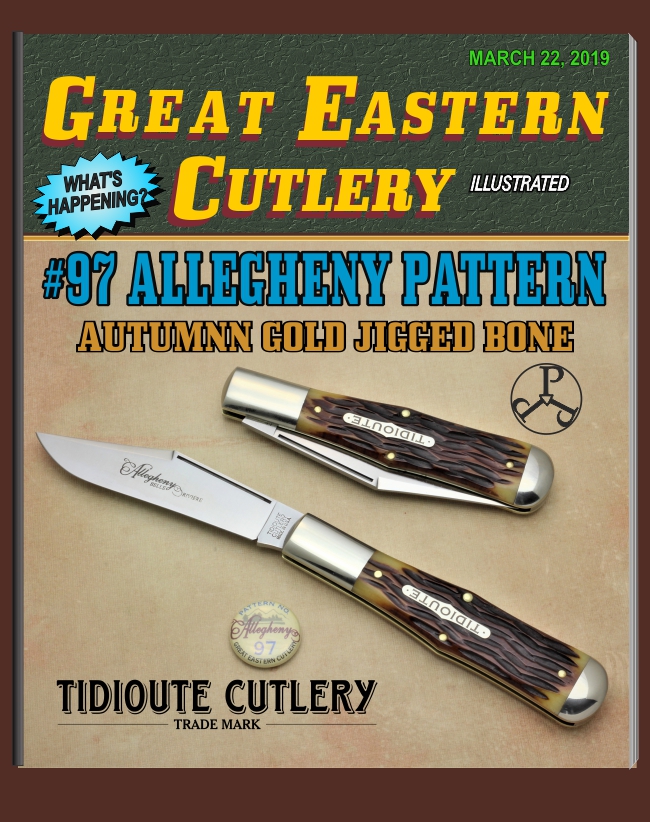 GREAT EASTERN CUTERLY MYSTERY KNIFE     Thursday evening I spotted a GEC#97 Mystery knife .  It was Autumn Gold bone Northfield "Titusville factory" two nail nicks sabre clip blade knives with a large hounds tooth shield.  There was also a picture of a box of yellow smooth bone scales with a note.   "1602 scales- 801 knives Tidioute Autumn Gold bone"  THIS IS MY THEORY :::  801 Autumn Gold Bone Tidioute knives might be a little hard for the dealers to get rid off.  I bet GEC sent half of those or less yellow smooth bone scales to the Northfield factory in Titusville ,PA.  The Northfield two nail nick sabre clip blades knives with be in much more in 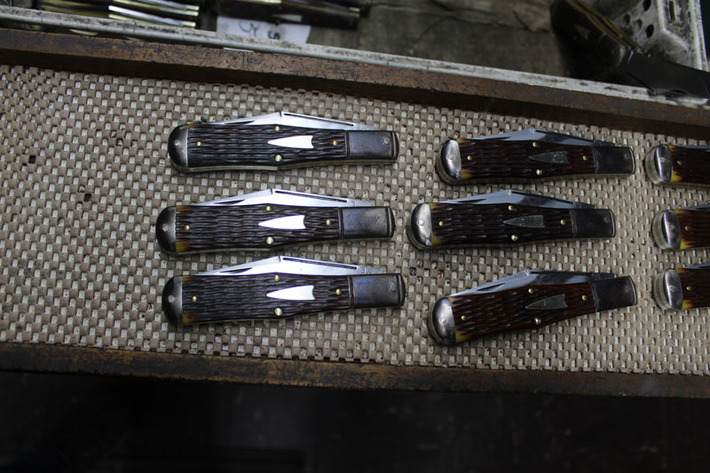 demand regardless of cost.   After 3 hours GEC removed that knife off of their web-sight.   GEC is awful about teasing their collectors. I had spoken with several dealers that told me 2019 would be bringing these type of numbers.  Unless a knife is allocated to specific dealers or an SFO, we may indeed be seeing a run of 801 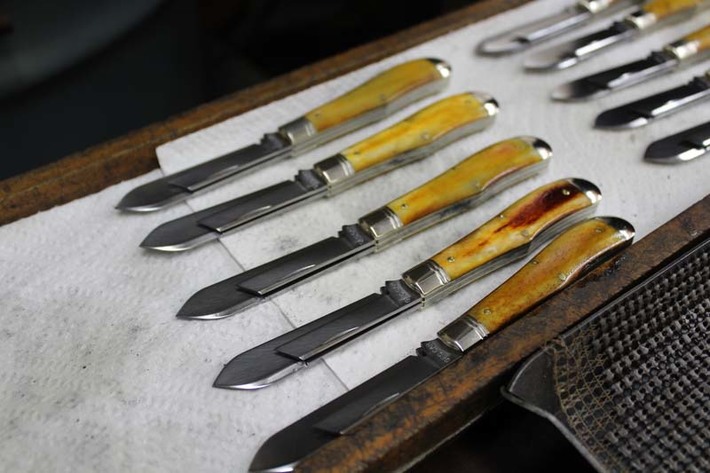 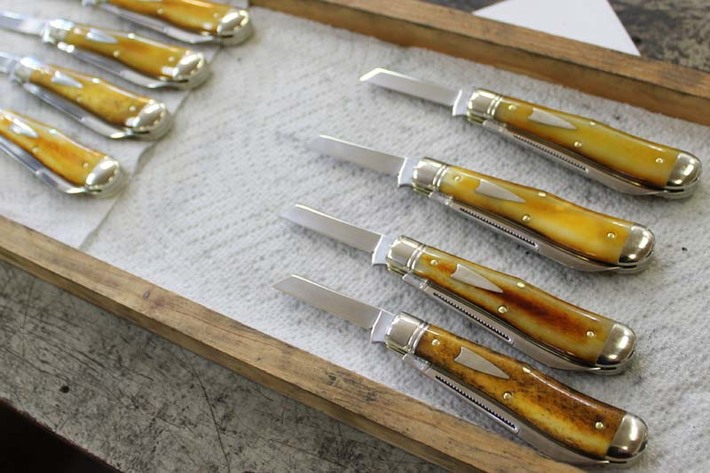 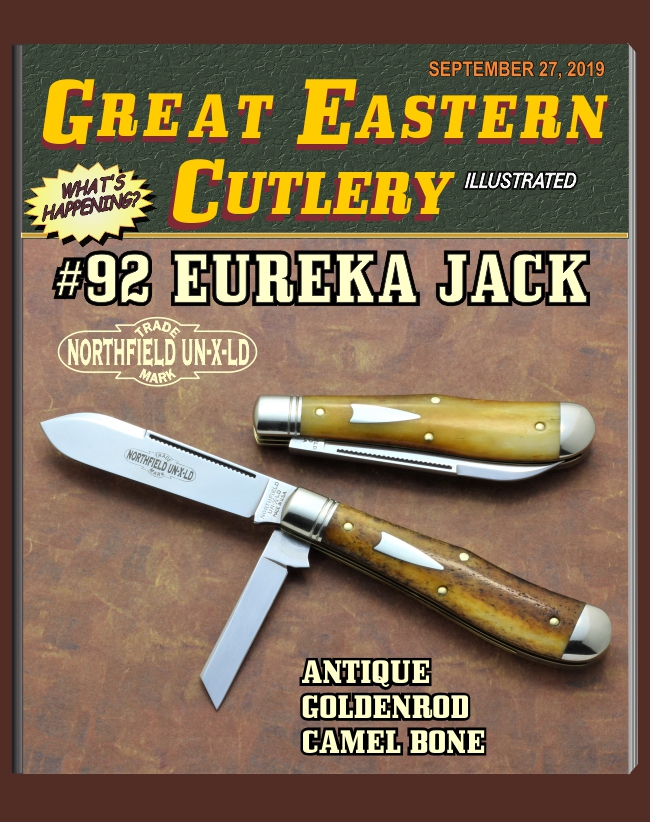 FeaturedCharles Sample left a comment for Rob DiLouie
6 hours ago

J.J. Smith III left a comment for John
6 hours ago

FeaturedCharles Sample left a comment for Michael Verdugo
6 hours ago