The Congress Knife: Y'all Come Together!

The Congress knife arrived on the scene in the early 1800s.   As with other Pocket knives such as Trappers and Stockman’s, the Congress was made with a specific audience in mind; and that audience was not congress.  Most likely the name Congress refers to the way the way the blades of the knife come together (as in the  equal numbers of blades are located on both ends  of the knife and then come together or meet in the middle of the handle).

The market for the knife was the Antebellum South  and the blades chosen were those needed to fulfill its agricultural needs.  The most common Congress is he four blade pattern which features two large sheepfoot blades as primary blades, and a small coping and pen blades as secondary blades.    The sheepfoot blades were used extensively in the cotton and tobacco industry.   The reason the Congress had two sheepfoot blades, one on each end, is the same reason the muskrat has two identical blades.  It allowed the user to cut twice as long before having to stop and re-sharpen his blades.  This allowed the worker to take fewer breaks during the work day.   The coping blade was used for scribing (perhaps carving initials in wood planks to mark work done?) and the pen blade was so that the knife had a blade with a point on it.

The pattern caught on like gangbusters in the Deep south and was found to be an excellent pattern for whittling.    The patterns quickly evolved and soon followed congress knives with  2 blades a Half Congress as well as 6 and 8 blade Congress knives.  Normally the Half Congress had one sheepfoot and a smaller pen or coping blade.  However the 6 and 8 blades tended to keep  two keep the two sheepfoot blades coming together in the center and just added additional blades such as a cuticle/nail file, small clips or additional coping or pen blades.  The most famous of is probably the six blade Congress that  Abraham Lincoln was carrying when he was assassinated.   (Abe Lincoln was said to be an avid whittler.) Today, many people call a six Blade Congress, regardless of the blades configuration a Lincoln Congress.   His actual knife had a large sheepfoot, a large spear blade, a cutlicle/file blade, two pen blades and one coping blade.

The early Congress knives, including the Lincoln congress were made on a slim concave shaped handle.  This meant that when the knife was placed spine down on a flat surface only the ends would touch the surface; the center of the knife would be raised in the air.  The ends were also smaller than the center of the knife so that you had two arcs.  Because of this shape, you have a somewhat long handle for relatively short blades! (Again the blades come together in the center!)  On the bright side, the longer handle gives you more to grip when cutting through tough stuff.

Today, you will also find congress knives built on a larger frame which allows wider blades to be added.  You will also occasionally find “congress” knives that have a flat back-spring. Many congress collectors can accept the wider frame but do not accept the flat spine, arguing (I think correctly) that the curve of the handle is an integral part of the pattern.  Some also argue, that the knife should have four blades, two  large sheepfoot,  followed by a small pen and a small coping. While this is the most traditional, it is probably not an argument worth making. 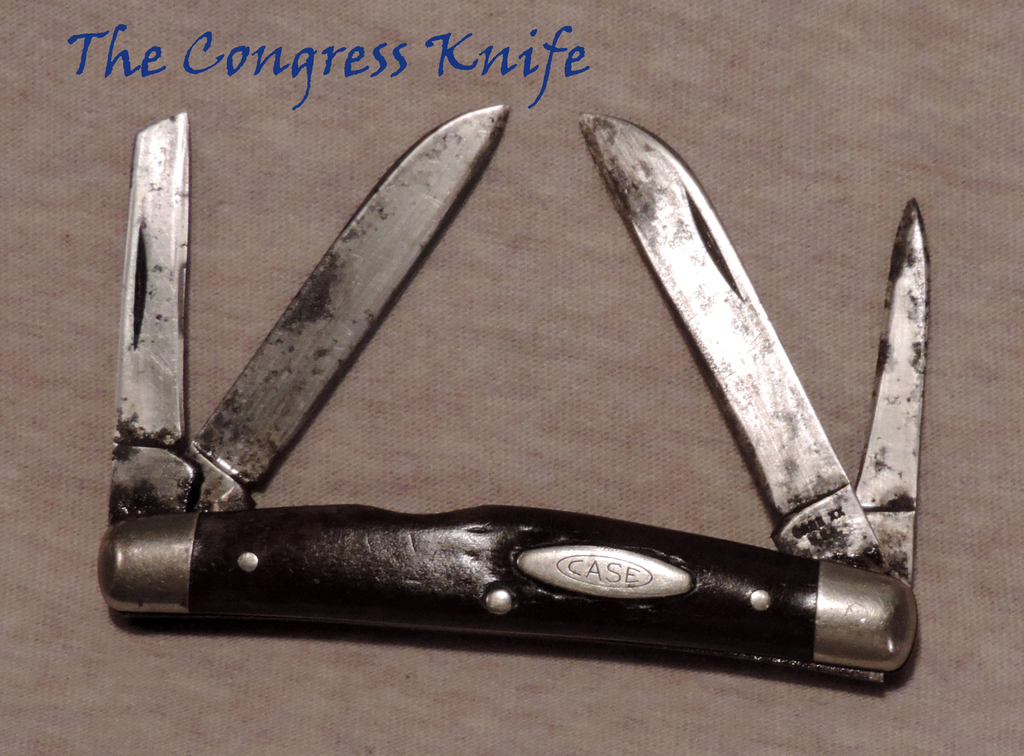 The Congress pictured is an old Case Congress from around 1965-1969.    The pocket worn scales are old green jigged bone!

Always do think of it as a 4 blade, but thats just me. And of course it goes way back when I guess folks worked in a vaiety of ways and Congress actually had a purpose....

I have only got one and don't carry it much . It does take a very good edge though , think I have cut myself more with this knife than any other ! 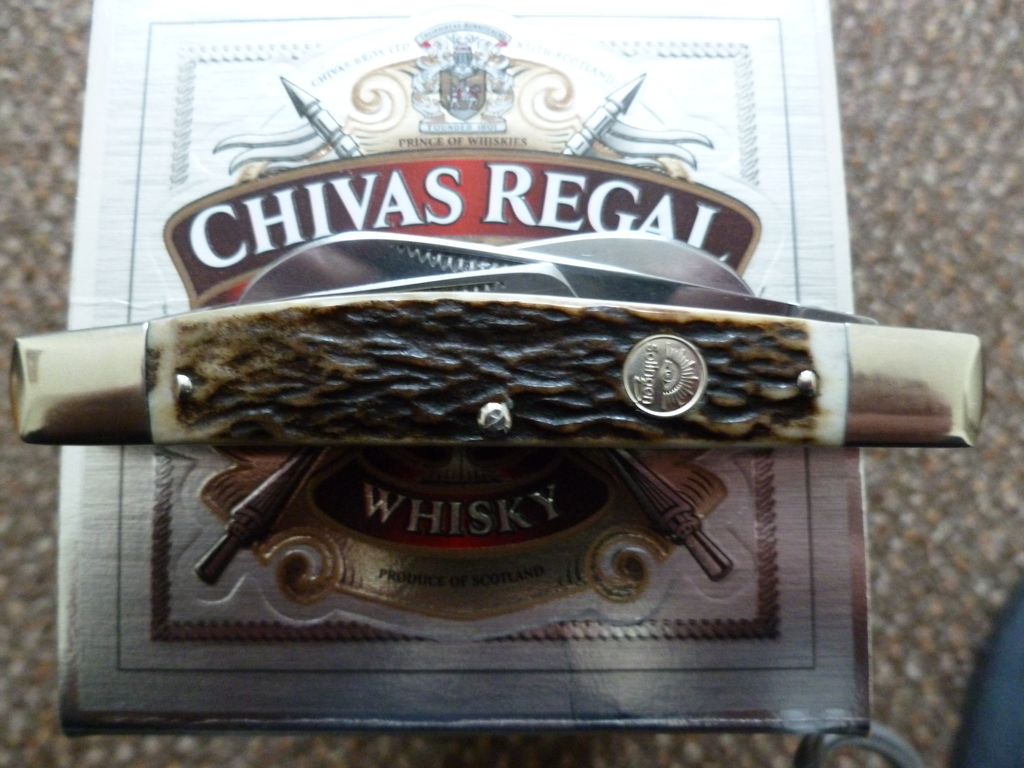 It looks rather nice there I think I must take it out more .

I that an Eye Brand, John!  Looks really nice, not to mention it is on top of my favorite Scotch!

That was my 60th birthday Scotch Tobias a couple of other bottles where in evidence as well alas all gone now !

Thanks Tim , I have neglected that knife of late , will have to give it a day out tomorrow .

howdy john.  all around beauty and love that stag!

thats a very nice knife John, my goodness and apparently a sharp one !

Here is my only congress, a Rough Rider RR707 Rifleman Series.

Got a few congress knives, but this Boker is my favorite.  The rounded bolsters and the smooth buffalo horn scales guves it a classy feel.  My only complaint is the duplication of the sheepsfoot blades.  Yeah, I know its "normal", but I'd like a spear on it. 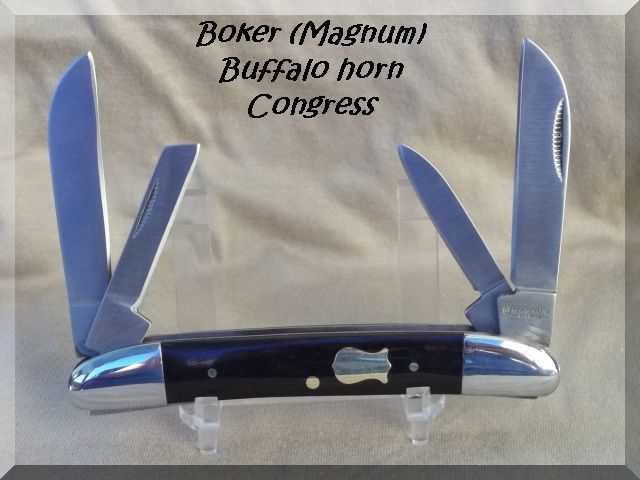 Jan Carter left a comment for John Burrell
8 hours ago

Jan Carter left a comment for John Burrell
8 hours ago

KnifeMakerJohn Burrell is now a member of iKnife Collector
8 hours ago
Welcome Them!