Everyone is welcome to post info on dating and identifying knifes. Charts , pictures anything you have to help members to find out more info on their knifes

Tags: and, date, identify, knife, your

Is it possible to date Colonial knives?

I just received this Colonial Ranger knife that I won on eBay.  Is it possible to date it from the tang stamps?  (There are more pictures of it posted under my photos.) 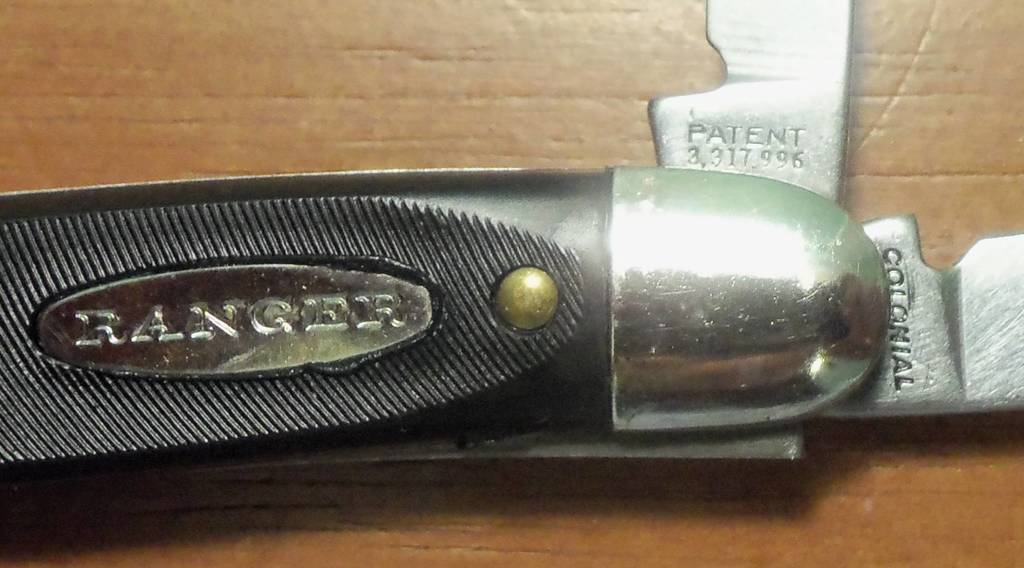 Unfortunately the short answer is no. After all those years of making knives, record keeping was minimal.So mich of the knowledge was in the heads of the owners. Steve Paolantonio, who is a member here now perhaps could add more to the story. The only other way to perhaps get an approximate date is another collector who might be able to say, I bought that knife new in 1960!

In a way, that's what differentiates Imperial who made minor changes in the tang stamp to get you closer in time frame.

That's for sure Steve. Many collectors today wish many of the knife companies kept better records......or ANY records.

when I took over the sales department back in the late 80's, my first concern  after 30 years in the private label business, how to build back the brand ?-I felt that Colonial Knife needed to begin the process of stamping all our products  with our name, hence the Colonial on the pocket blade. So, to answer the question as to the date-late 80's-90's. due to lack of interest in the traditonal stockmans patterns- production ended in 2000.

I have a few left inventory and currently selling them "in new" condition for $69.99 each while they last-American made knife-Ranger series

Thanks Steve, I really appreciate the informatiion.

Steve, I have one of your 2205 Military Scout Knives.  The tang is marked AUS 34.  I assume this is the type of steel used but I have been able to find no information on this steel.  Can you tell me anything about it?

Thanks for your help.

Here is an image I have for some of the older Schrade tang stamps.

Got it yesterday. See her here.

Thank you for posting that image - the one knife I am trying to date has the #8 logo, now just have to find out what the pattern 881 is. Maybe that will give me a smaller date range. 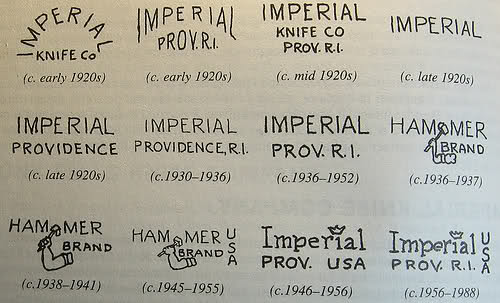 I do have some Hammer Brand knives Brad and that is a one good looking knife. I still like the celluloid scales, I wish they still made them! Look how deep that color is!

That is not celluloid Steve. I was dismayed to find, that it is a thin plastic overlay on a steel frame. But it doesn't detract from the fact that this knife at 75+ years old is still tight with STRONG back springs. Besides, I spent less than $7 for a usable American knife.

OK funny how they achieved that color and what looks like depth using a thin piece of plastic.  I agree still a good deal and somewhat amazing isn't it? 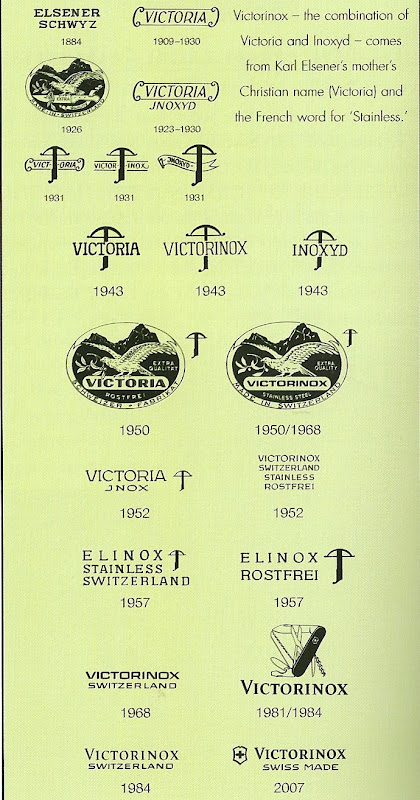 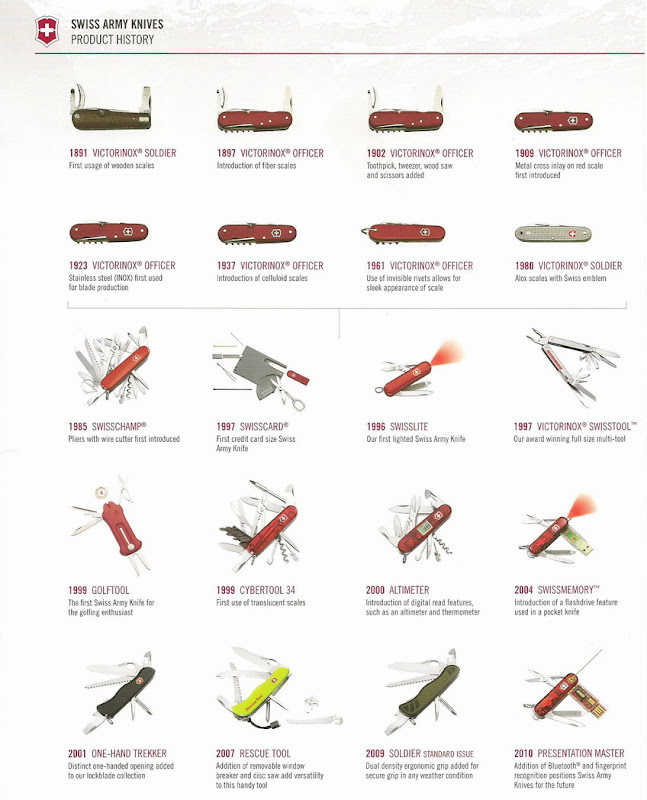 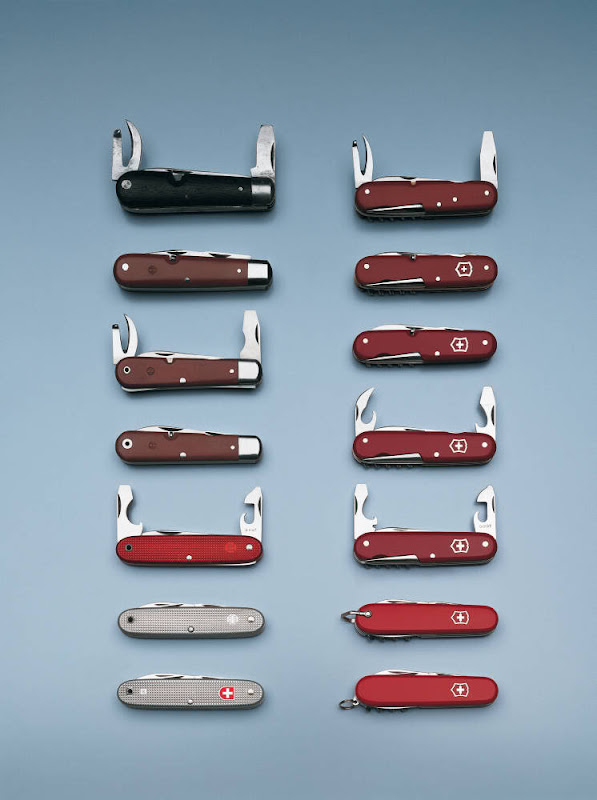 I have another tang stamp image for Victorinox somewhere but It may take awhile for me to get it posted. I also have old catalog images showing different models.

Thanks, Wayne! Lots of good info for us SAK fans!

You should post this in the "Knife Dating" group. You certainly do have a lot of great info here. Thanks.

This has nothing to do with tang stamps, but, Wayne, you are the SAK Professor! I'd like to see a dating list (in the SAK group?) for when the various models came out....like when did the ever popular Classic first come out? 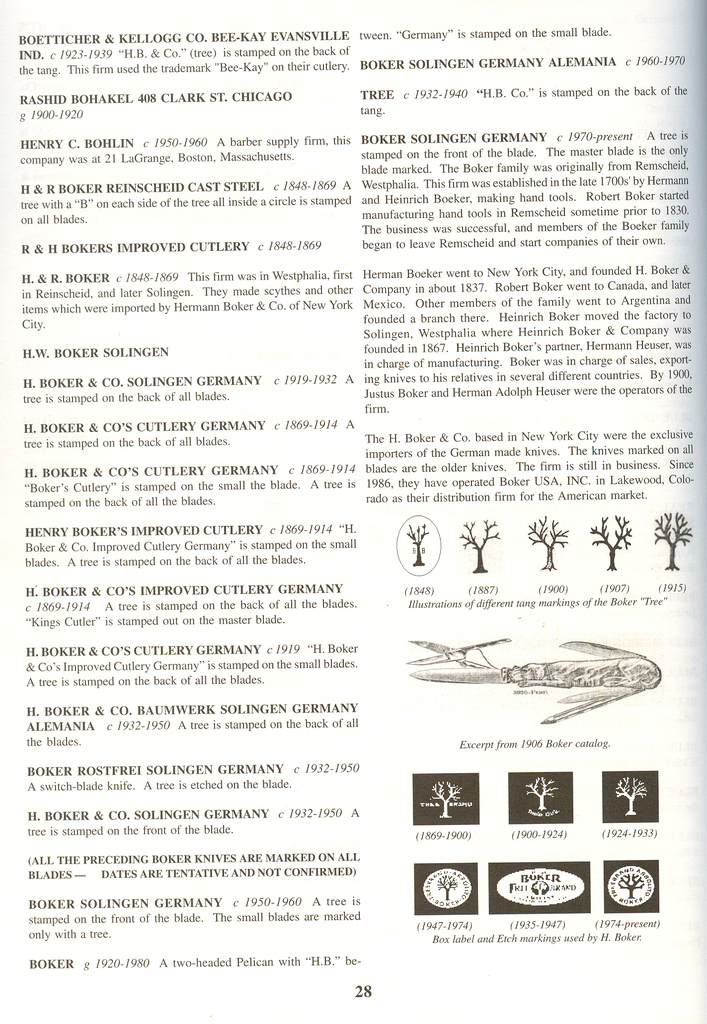 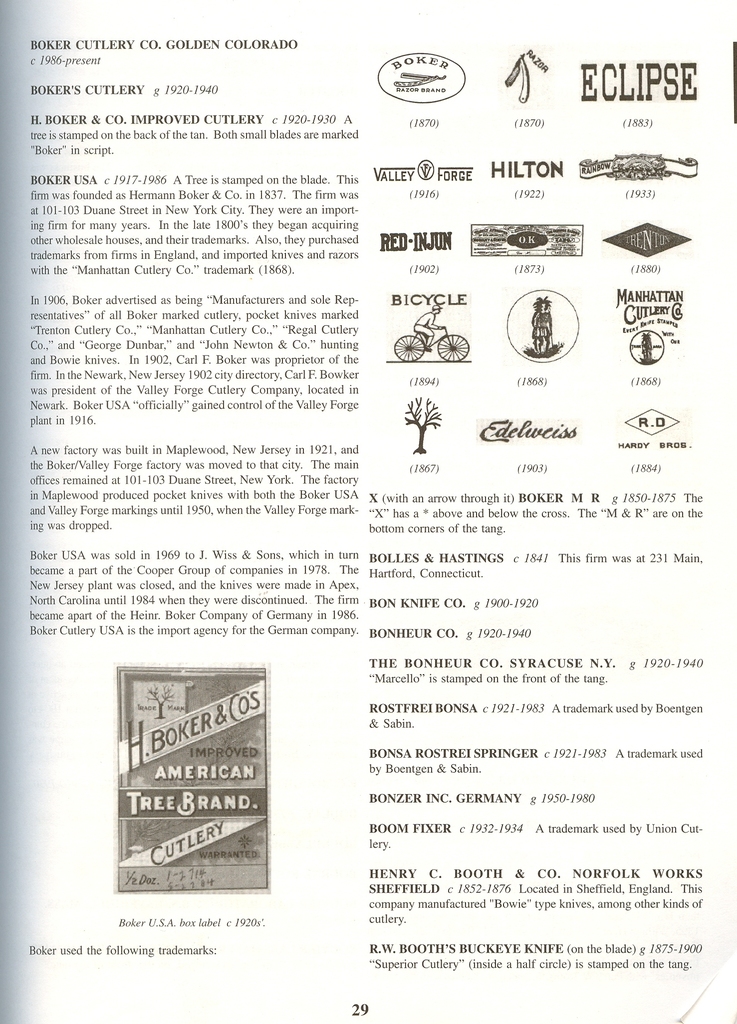 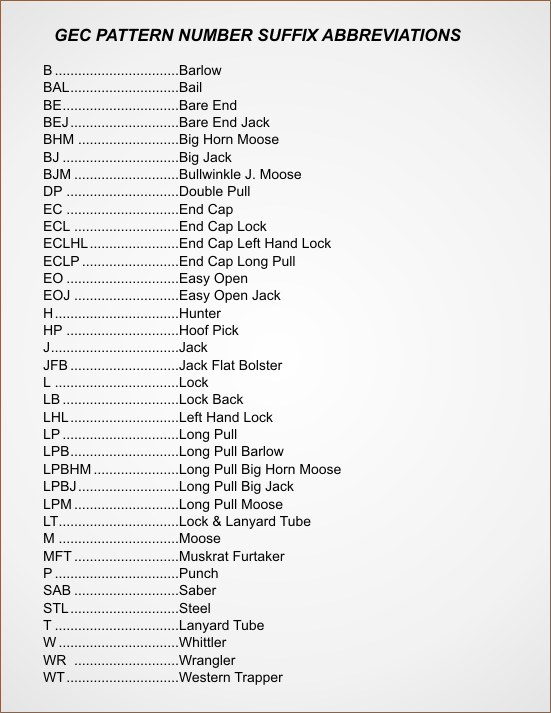 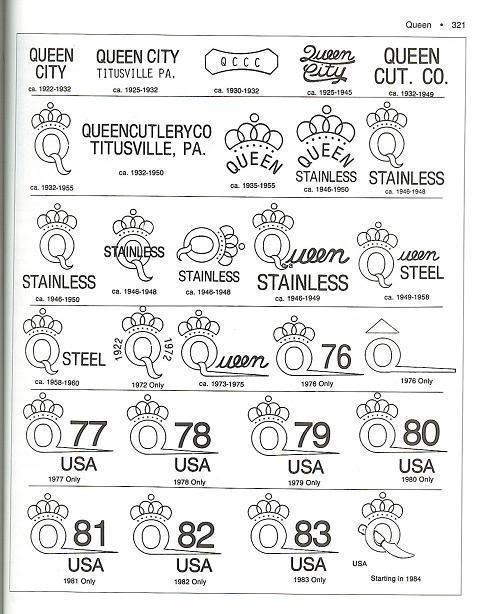 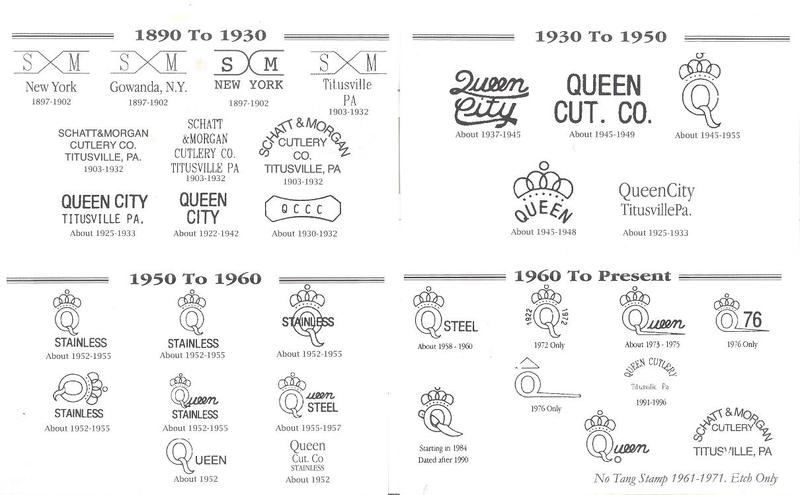 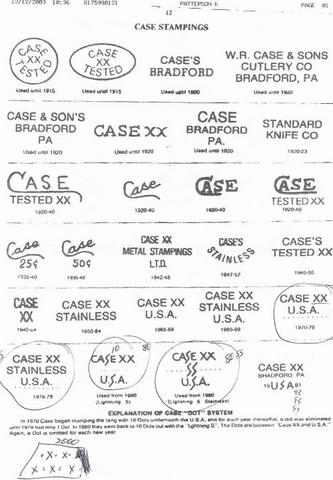 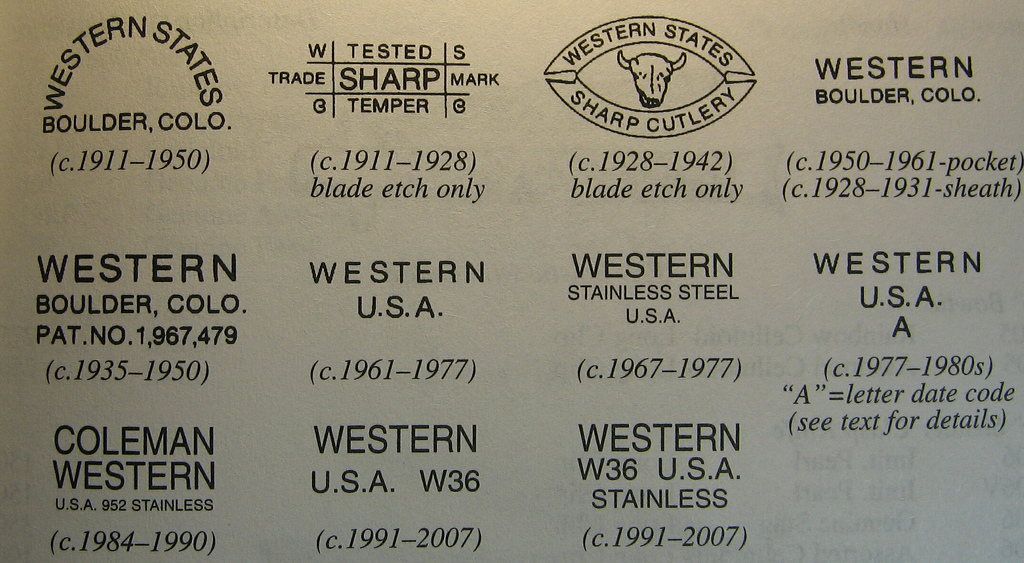 This isn't all of them, but it is a well put together.