Knives On The Big Screen

For fans of knives from television, movies, comics, etc 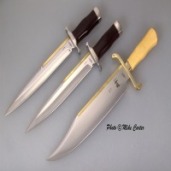 Yes, they all had knives of some sort, yes its highly personal what you consider best!

This list is courtesy of Micah Mertes, who thinks its ideal....I know argue with him!

Easily the most kinetic and exciting guy-trapped-under-a-rock movie ever made. The based-on-a-true-story film features a top-form James Franco as Aron Ralston, who got his arm stuck under a boulder while canyoneering and freed himself with a pocket knife. It's suspenseful, moving and eventually brutal, breezing right along thanks to Danny Boyle's pinball machine-style direction.

The movie that introduced Gen Y to the concept of cannibalism. We were probably too young.

“Alive” follows the true story of a Uruguayan rugby team who gets stranded in the Andes after a plane crash. To survive … extreme measures. And, hey, Ethan Hawke!

This docudrama from “Last King of Scotland” director Kevin Macdonald reenacts a mountain climbing expedition gone wrong in the Peruvian Andes. Like “Man on Wire” or “The Cove,” this is a doc that plays like a big studio thriller.

A 1966 gem that everyone should see despite how politically incorrect it seems now. A group of guys on safari in Africa encounter a tribe, and one of the guys refuses to give the tribal leaders a gift. The tribe is offended and kills all of them but one. They instead give him a head start and hunt him across wild Africa. He's naked and weaponless and must use his wits to survive. It's awesome.

Anthony Hopkins and Alec Baldwin fight a bear. And when they're not fighting a bear, they're speaking the almost literary dialogue of David Mamet. And then they go back to fighting a bear. And it's a pleasurable cycle of high-low art.

Liam Neeson vs. a wolf pack. It's a bloody, brutal good time at the movies. But it's also a thoughtful, melancholy film about accepting that you and everyone you love will someday die.

In this period western, a group of settlers are lost in the Oregon desert, their only hope two untrustworthy guides. It's a slow-moving film, naturally, but sometimes unbearably tense. When that wagon's going down the valley and it looks like it might crash and if it crashes, everyone's going to die … man. And it's also got a few nice performances from Michelle Williams, Bruce Greenwood and Will Patton.

The ULTIMATE guy movie. A group of National Guardsman on an isolated weekend exercise in the Louisiana swamps use a couple of canoes that aren't theirs and incur the wrath of the local Cajuns. It's fevered, disturbing, breathless. And the cast. Keith Carradine, Powers Boothe, Fred Ward, Peter Coyote. It's “The Expendables” for cinephiles.

2. “Jeremiah Johnson” “All is Lost” reminds us that Robert Redford can still be a great actor and movie star, and it reminds us that he used to be in movies like “Jeremiah Johnson,” a grand, tragic adventure about a guy who tries to hack it alone in the wilderness. With Redford in his prime and all those stunning Utah vistas, the movie's mostly heaven.

The star and director of “Forrest Gump” set out to make a modern-day “Robinson Crusoe,” and they nailed it. They nailed it so completely that no one should ever again attempt to make a stranded-on-a-deserted-island movie.

Because your deserted island movie's not going to have Tom Hanks. It's not going to have ice skate dental surgery or an unopened FedEx package that serves as a symbol of hope. It won't have Wilson, one of the most memorable characters in all the movies that's also a volleyball.

Why try to top it?

I haven't seen all of them so I can't say.  Here are my top 10 survival movies (including two from above, no particular order)

3) Flight of the Phoenix (first version)

9) Island in the Sky (with John Wayne)

10) Wizard of Oz.  Think about it.  Its a story  about a little girl who get lost after a storm and winds up in a strange land  where all she want to do is go home.  A woman knows the secret of how she can go home but instead of telling her, the little girl is tricked into a dangerous quest by some creepy old dude to kill his arch enemy.  The girl is left with only her wits and little dog to survive in a strange land, fight off flying monkeys, and save a kingdom.  Works for me  LOL

if not that then I'll go with Predator.

In reviewing the The Naked Prey  a 1966 adventure film starring Cornel Wilde, which I have in my files , the character played by Wilde, who was running from the Native tribal members, took a knife from the first Native that he killed just minutes after he was released to be hunted. That knife played a big part in his survival.

This is one of my favorite movies of all time. Wilde was both Director and Producer of this movie. He said later that he had been sick during the making of the movie. The next time you watch the movie, watch for a scene near the end where the character is in the middle of nowhere, with the Natives in hot pursuit, As he was standing there looking bewildered about what to do next, an automobile passed by about an eigth mile from him in the distant background. That could happen, except that cars had not been invented yet.

Clay, the scene where the native throws the spear and it goes over Wildes shoulder was not scripted.  Apparenetly the native got excited and just threw it.  It almost hit Wilde.   The movie was based on a real life event:

In October 1808 fur trapper John Colter set out with another trapper, John Potts, on a trapping expedition. Foolishly, they returned to the Three Forks area in Wyoming, where they were able to amass almost a ton of furs. However, at Jefferson Fork they were attacked by Blackfoot Indians, who shot and killed Potts and took the furs. Colter was captured and given a chance to live. He was stripped naked and given a 30-second head start to run for his life. He outran all of the Indians except for one. When they were the only two left, Colter turned on his pursuer and in the ensuing fight took the Indian's spear and killed him with it. Colter ran for five miles across a rocky plain between the Jefferson and Madison Forks. Once he reached the Madison River, he dove under a mass of logs and beaver lodges and hid in an air pocket in the icy water until nightfall. He floated six miles downstream and climbed up a sheer cliff. He walked, still without any clothes, the 250 miles to Fort Raymond, where he arrived after 11 days.

I think the River Wild might be a good "date" movie, if you can survive watching it.  And for the kiddies there is Alaska.  And of course Deliverance is just an around feel good movie for the whole family!

Alone in the Wilderness is my all time favorite

A Cry in the Wild

The Hobbit and The Lord of the Rings

In Tolkein's books, and the recent movies, the knives and swords play a very important role.  The blades are named, indicating that Tolkein himself placed great importance on the blades.  Glamdring, Narsil, Orcrist, Sting, Anduril, Isildur . . .

Is there anyone here who own any of these replicas or collects the blades from these movies?

now, now, Data.  Not all of the weapons are named!  First they have to do great deeds, then they are named.  You don't become Orcrist (Goblin Cleaver) simply by being made.  You must prove yourself in a battle.    I'm seriously thinking of picking up a copy of Sting. It is rare that a mere dagger would warrant a name.  Names are normally given to more noble weapons such as swords, axes, and war hammers.

Still if you venture into the Dungeons of Moria, you will find all sorts of magical weapons (both good and bad) that are named for their great or evil deeds.

I don't have any but I do have visions of this one, and watch all the movies that involves it. 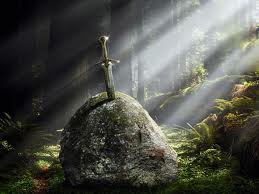 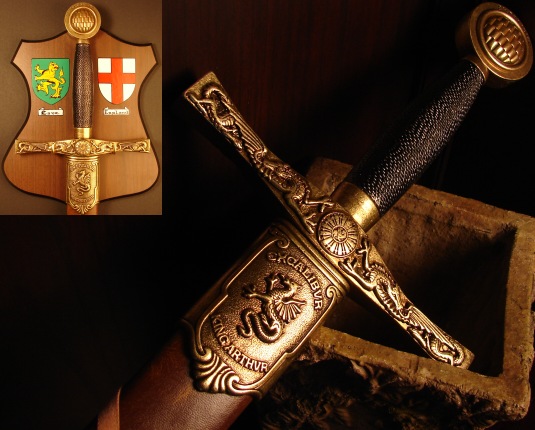 Excalibur is the legendary sword of King Arthur, sometimes attributed with magical powers or associated with the rightful sovereignty of Great Britain. Sometimes Excalibur and the Sword in the Stone (the proof of Arthur’s lineage) are said to be the same weapon, but in most versions they are considered separate. The sword was associated with the Arthurian legend very early. In Welsh, the sword is called Caledfwlch .

There are two swords that appear in Arthurian legends: the Sword in the Stone, which only Arthur could wield, thereby proving his rightful kingship; and the sword given to him by the Lady of the Lake. In some versions there is only one sword, while in others, the Sword in Stone is broken and later Arthur receives Excalibur from the Lady of the Lake. Having a magical origin, the sword was unbreakable and its scabbard protected the king from physical harm. Morgan Le Fay, Arthur’s half-sister, stole the sword. It was recovered but the scabbard was lost, hence allowing King Arthur to be mortally wounded in the Battle of Camlann. Arthur orders one of his knights to throw back the sword in the enchanted lake, and when done so, a hand appeared from the waters to catch it, taking it beneath the water from where it had first emerged.

You are very correct Tobias.  I also was thinking of getting a Sting but there are differences in Bilbo's Sting and Frodo's Sting.  I also wouldn't mind having a Narsil.  Oh who am I kidding, I want them all. I'm with you Data.  I'm just afraid to enter the realm of fantasy blades.  But dang. some of the things made by Kit Rae and others look flat out fantastic!

Mike Botts left a comment for Ken Mundhenk
2 hours ago