Blades larger than standard fixed and folding knives. In other words, the top 90% or more of all the knives in use..

I'll be giving away a couple of items for the Grand Opening of Trestle Pine Knives.  It's also Christmas so it's a win win no matter how you look at it!  All you have to do is subscribe to the Trestle Pine Blog or create an account.  Either of these actions will increase your eligibility for future drawings or specials.

For the Grand Opening by opening an account you become eligible to win either a Marble's Mini-Ax OR an Helle Algonquin neck knife.  The drawing will be held on New Years Eve so you have some time to get your name in.  Grand Opening Give Away Drawing! 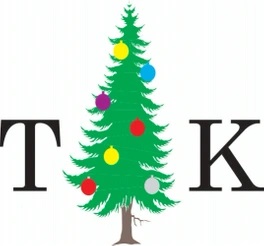 Awesome. These are the machetes I recommend as the best quality and price. The only difference in these and custom made is the extra $300 for a fancy handle and a leather sheath. Tramontina has been the working man's choice for three generations. One thing I learned from decades of back-country treks in Central America and all around the South China Sea: hire at least two or three good young men with stout hearts and sound morals, and listen to them. Treat them like local experts, observe their decorum and dignity, and let them be your guides. You can earn friendships that can last a lifetime, you will learn a lot more about the environs in which you are operating, and their advice might save your life.

In the 1990s in the jungle South of Manila I asked my guide and friend Claudio why he carried his bolo (16" simple machete) aacross his chest, at the ready. A few days later a hefty 3.5m king cobra suddenly rared up in front of me and went for my chest like a falling log. My bolo was ready. His skin is on my wall. Thanks, Claudio.

Get a decent whetrock like the inexpensive 2x6" inch-thick two-sided ones. When you arent using your bolo then be sharpening it. Every waking moment. Keep it shaving sharp if you can.

Take a look at this site.  It carries all the majors.  They even have a Tramontina 5 pack for $39.99, so you could check out what kind of tool would best suit you.

This is the apex of knife making. Simple, practical, employing the refinements of the art with no superfluous ornamentation. Really fine looking machete. 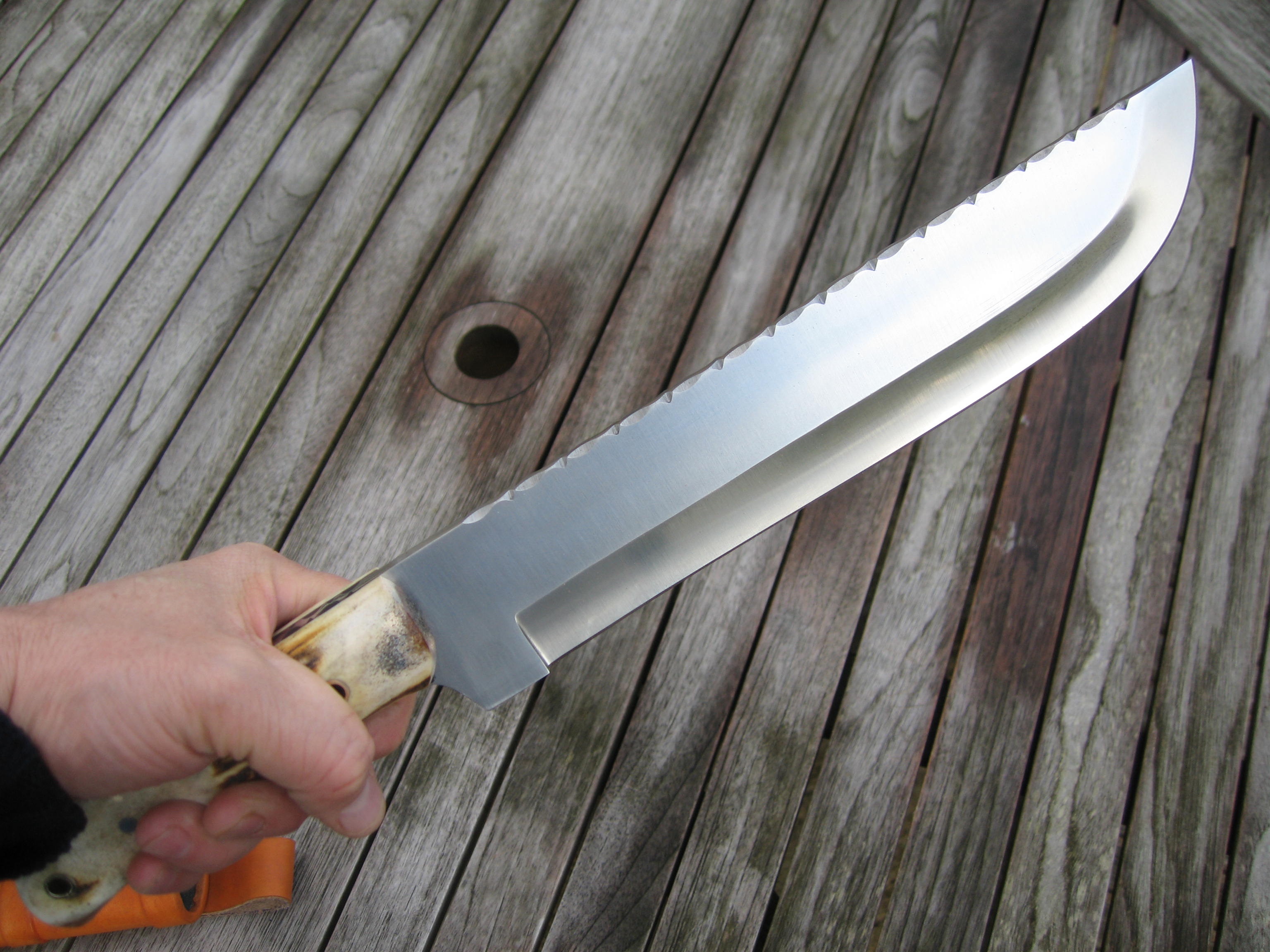 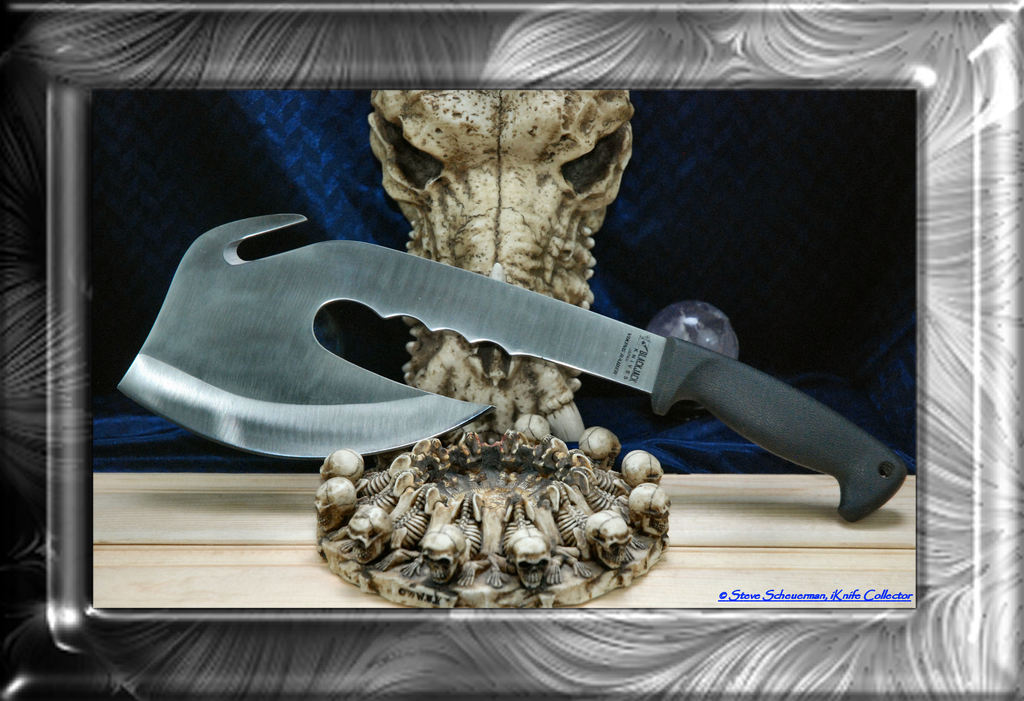 I just saw this Ad today.  I would like to see one in person, I like the classic look 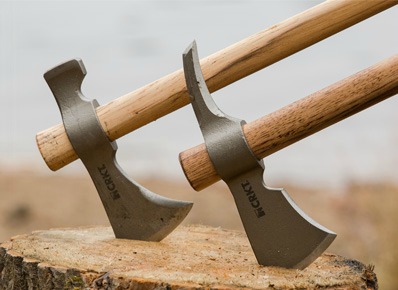 One of the items I took on my recent outing was a Marble’s Safety Hatchet.

I was always interested in an original version but didn’t do anything about it until the recent imported one was released.  At a price in the mid $20’s to upper $30 range depending on the handle choice of either a hardwood handle of unknown origin or the higher priced one with American Hickory.  I chose the American Hickory.

The Marble’s Safety Hatchet is one of those designs that’s been around for ages but kind of got lost in the shuffle as our outdoor activities changed.  The days of heading out in the wilderness with only what we could carry on our back or in our canoe for a week or longer have been largely replaced with how much gear can be stuffed in the back of the SUV or 4×4.  I’ll even admit to carrying a chainsaw along for some of our extended camping outings.

At under a foot in length and weighing around 15 ounces, the Marble’s Safety Hatchet isn’t meant to be a replacement for an axe. 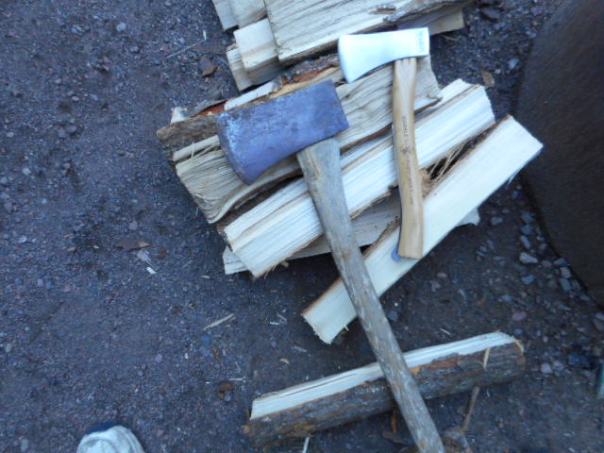 
One of the advantages of a hatchet is obviously the size.  A huge advantage (in my book) of the Marble’s Safety Hatchet is the built in blade guard which eliminates the need for any type of sheath.   Sorry, but the custom sheath on my axe is not commercially available. 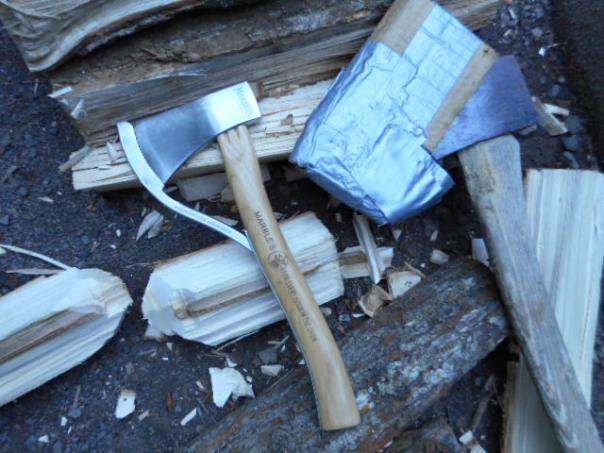 
This little hatchet came with a razor sharp edge which was a surprise.  I had anticipated something considerably less and was amazed at how aggressively it cut into a chunk of firewood. 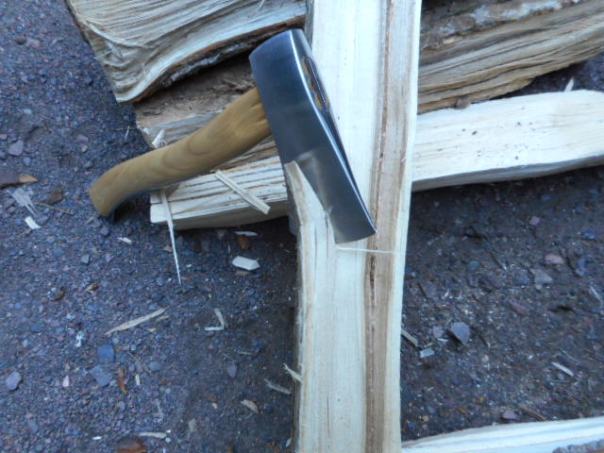 
I was pretty aggressive with the chopping to see how it would hold up and if the edge on the blade would start to roll on me.  The only issue I had was the head of the hatchet loosened and moved about an 1/8″.  I kept chopping to see if it would continue to loosen up and was relieved to see that was the extent.  A sharp rap on the butt of the handle reseated the head to it’s original location and a couple taps on the wedge seemed to anchor everything solidly in place.  I didn’t encounter any other issues.  Over the course of a couple of days I was really impressed with the way the edge on the blade held up.

While I don’t envision or suggest the hatchet replacing or completely filling the role of an axe, it’s a great item to carry along for lighter chopping.  With that sharp edge, it also did a great job splitting off smaller kindling pieces to get the cook fire going.  For splitting bigger pieces, I’ll use the axe, but the hatchet definitely has a permanent place in my kit. 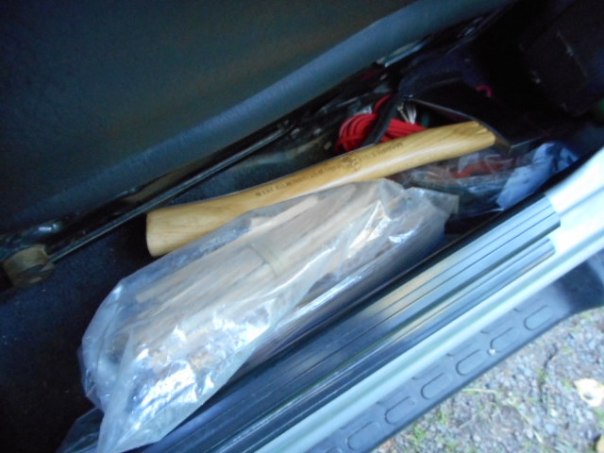 
The compact size and built in blade guard make it a simple matter to tuck  under or beside my seat in the Jeep.  Just remember, it’s not an axe, it’s a hatchet and as such the Marble’s Safety Hatchet is a great little tool to bring along!

Muskrat was asking about the grooves where the head mounted on the handle.  They have a unique shape for the handle to fit in the head. 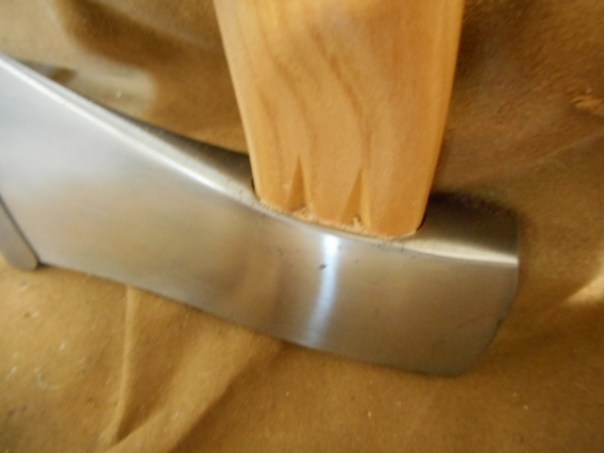 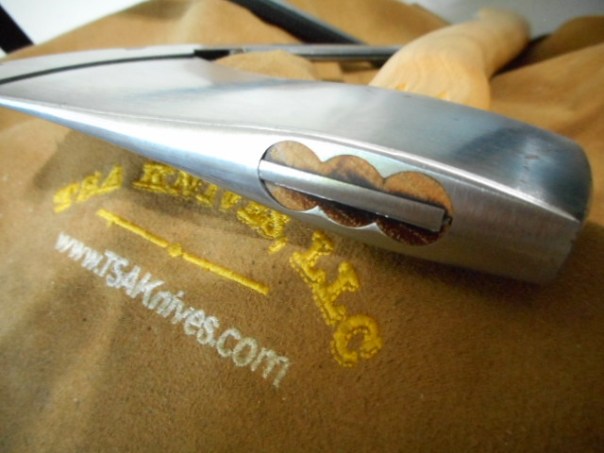 An interesting look at an old design. I am quite surprised by the quality, in fact shocked. I never owned a Marbles, but have seen them advertised by Smoky Mountain Knife Works. For the money it might be fun to try don't know if it would be a keeper but might be worth it from what Greg said.

I was very surprised also Steve, that is actually the reason I posted this here.  I had thought about getting one because the price is right for a tool that will only see spuratic use.  Now that I know it will hold an edge, I am really in for one

Go to the machete pros -- that's all they sell

Opinion's on Cold Steel's  Rifleman's Hawk or its relatives.   Is it worth buying?  Yes/No/maybe?   I've read the reviews on Amazon.  I trust the folks here more! I have a true love/hate relationship with Cold Steel and the braggart Lynn Thompson...Until he shifted his production to China-- after Camillus went under -- I had bought some twenty nine of his blades, since then I can't be bothered to check which are made in Taiwan (still) or China...Seeing that his sales plummeted he brought back a lot of his production to Taiwan and Japan.

The axes are made for him by American Tomahawk and they do produce a very good product...I would much prefer the Trail Hawk over the Rifleman's as I prefer the powl better.but the blade is much smaller on it...Actually, of both, I'd take neither and if staying with Cold Steel, I'd get the Axe Gang Hatchet if I was staying small or the Trail Boss small axe over everything...I've carried a HBC pattern canoe axe for some 40 years which it is patterned after.

It is mass and velocity that cuts wood with an axe and the more of both the easier it becomes meaning less caloric consumption and spent energy to achieve the same results...e.g. a maul over a felling axe for splitting wood.

The only thing a tomahawk is good for is for rendezvous at some historical mountain man reenactment and very light duty chopping...If you want to limit yourself to the latter the a hawk is fine but you'll find trying to limb a small tree gets to be tedious, repetitive and energy robbing where with a hatchet you'll breeze through it.

John Bamford left a comment for Valera Bochkarev
16 hours ago

Valera Bochkarev is now a member of iKnife Collector
yesterday
Welcome Them!