Knives of the great INDOORS!

I thought maybe it would be nice to talk about the unsung heroes, the Knives of the Great Indoors! (and perhaps the back porch, patio, garage or workshop).  These are the knives that are rarely collected but often used, abused, and cherished.  Some have been turned into collectable patterns, such as the bartender and the hawkbill but many just remain trusty work knives.  Many are purpose built cutting tools such as cleavers.  Others are more general purpose such as a paring and boning knives.  We all have them.  Let’s show ‘em off. If it cuts around the house, let's see it!

My first is somewhat an oddity.  (Later ones will be more common) This  is the Camillus Host Knife. These were made in the 1950s and early 1960s and were purpose built for use at cocktail parties.  Cockail parties were all the rage in the 1950s and they are making a comeback.  This knife had it all.  A stainless steel serrated blade guaranteed never to dull.  A non-porous hard plastic handle.  And a olive fork tip designed to spear olives for the martini and cherries for the Shirley Temple.  The blade was perfect for slicing fruit, cheese, small sausages or tomatoes.  The model 187 was the standard while the upgrade model 188came with a maple cutting board that allowed you to store the knife on the bottom.

Pictured below a are a 2 Camillus and one Camco host knife.  One of the Camillus knives is advertising V V O scotch, a popular scotch of the 1950s Also pictured are my Apollo Moonshot glass.  The double as a shot glass on end and tumbler on the other! 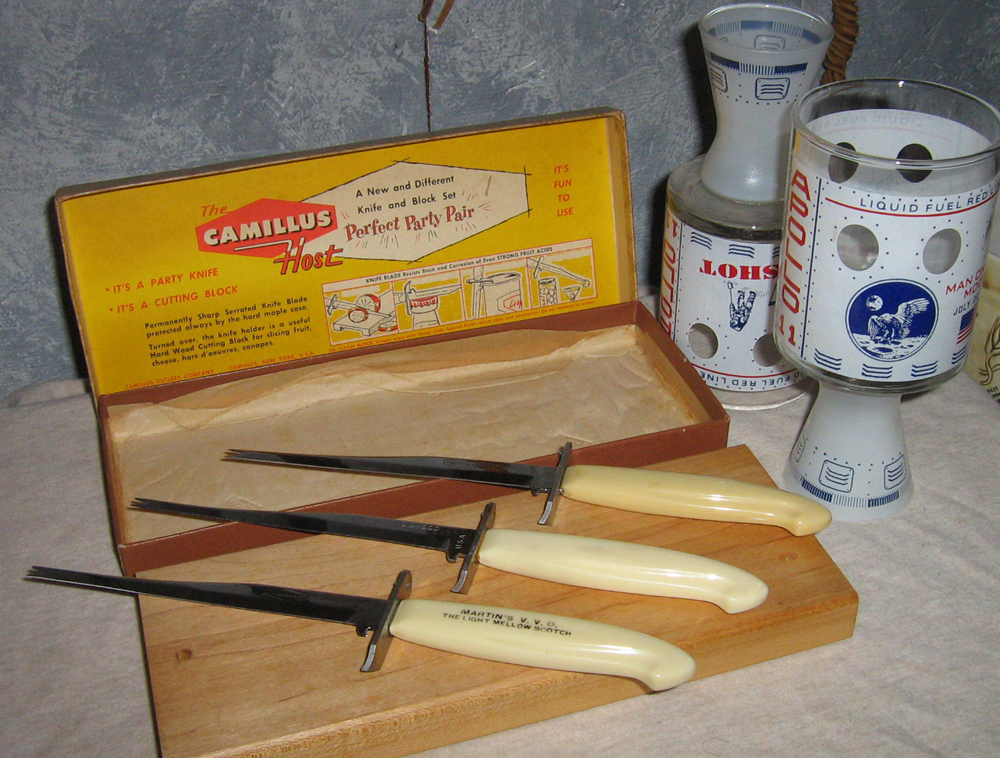 A close up of the cross guard on the Camco Host knife.  It is an integrated cap lifter and beverage/beer can opener.  Of course it can also be used for fruit juice and coke cans.  all of it would have been indispensable for a 1950s/1960s cocktail party! 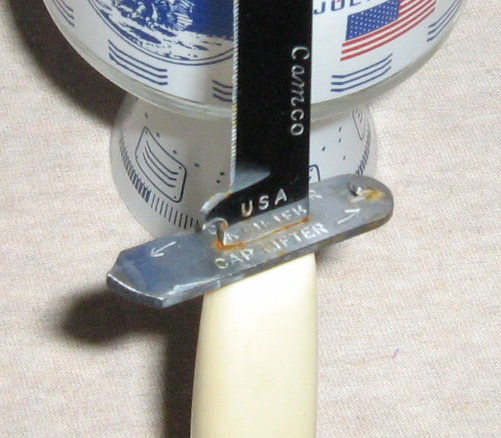 When Camillus first applied for the patent of the cross guard of the host knife they put it on a small bird and trout knife.  Soon afterwards it was released with the specialty blade 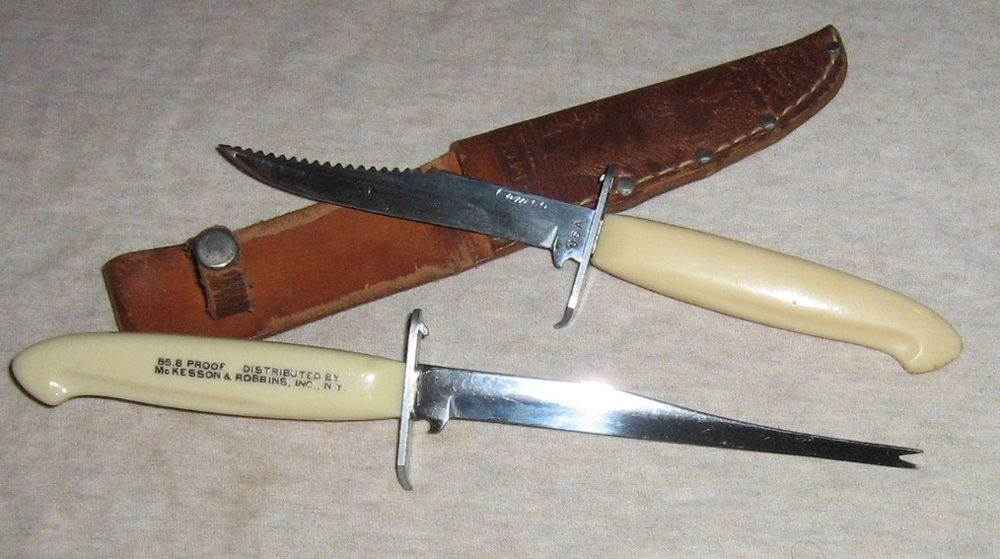 So there you go!  Let's see some more knifes of the GREAT INDOORS!

FeaturedPermalink Reply by Charles Sample on September 7, 2014 at 23:20

I have this carving knife and fork set.  The handles are wood and each one is the sheath for the other.  When it is put together it makes a fish.  It was made in India.

I got this cleaver at an estate sale for about a dollar a while back.  I have no idea who made it as it has no markings.  It is just one tough brute of a kitchen tool!  It has convinced me that I need to find one in better shape  Sure they venture outdoors but cleavers are also a knife of the Great Indoors!

FeaturedPermalink Reply by Charles Sample on September 8, 2014 at 21:19

That is a big un, Tobias!

And it looks like they didn't spare the rivets, either.

no doubt this cleaver is butt-ugly and brutish.  But it holds a good edge.  Obviously not a collectible item!

The first is a gift from a friend that thought maybe Donnie could use the stag ROFL.  Made in the late 1800's, you know I wouldnt let Donnie take that stag 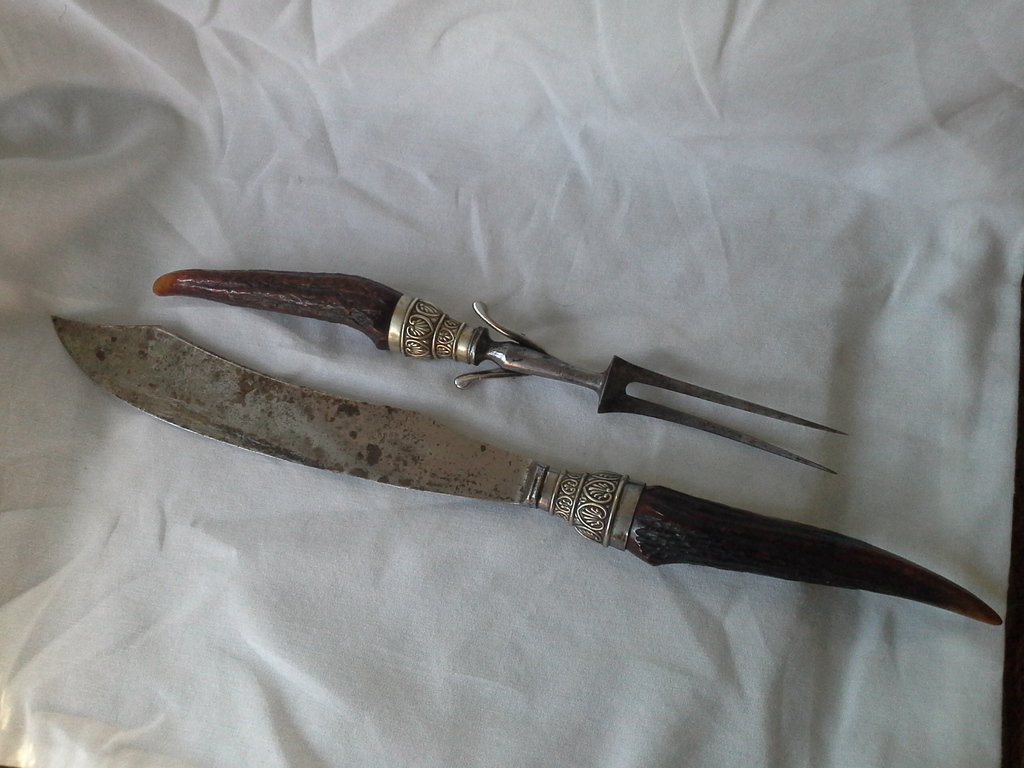 The next was also a gift from a different friend.  I have no idea at all about why they would have built it 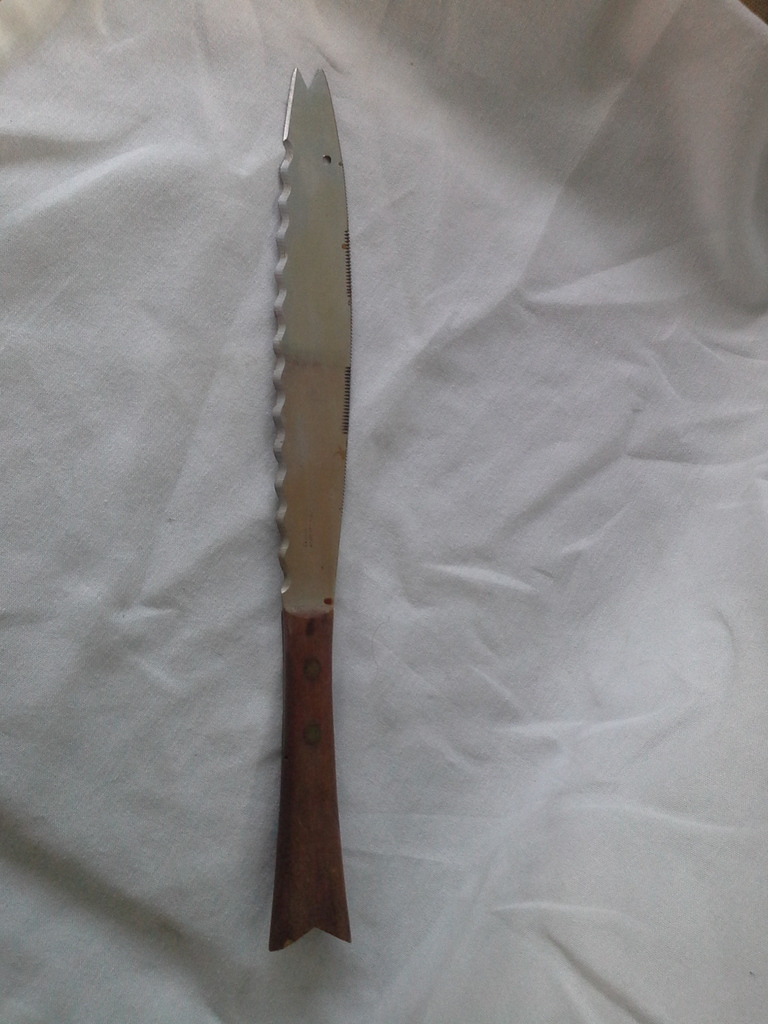 This looks like either cheese knife or fish knife with scaler and hook remover.   Very interesting

The next was also a gift from a different friend.  I have no idea at all about why they would have built it

Nothing fancy but then you don't need fancy to cut a juicy steak.   My Chicago Cutlery Steak Knives.  They originally belonged to my parents.  I'm guessing the date from the 1960s. Kitchen knives that didn't need "micro-serrations" to cut meat  These will take a finger off! Not always easy to do, Jan.  Lots of "micro" serration steak knives out there.  Managed to find some J.A. Henckels steak knives for my daughter without serrations.

This Craftsman is cool!

Jan Carter left a comment for tim payne
8 hours ago