For those who have an antique / vintage Solingen knives 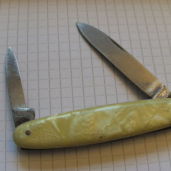 I just bought a bery nice Edge Brand "Original Bowie Knife" 445. Ill have to post some pics later, but does anyone know how to date Edge knives? I think its not too old, it has the phrase etched into the blade and Ive seen old ones with it stamped in.

Michael- These were imported by G.C. Co. (Gutmann Cutlery) primarily in the 50-60's, although extending into the 80's by some accounts-  They were considered an inexpensive, but well made knife-- Many of these were made by Anton Wingen, Jr or Linder  in Germany.Their weakest point, most agree, was the quality of their sheaths, which often did not hold the test of time.They are not the most valuable knife in your collection, fetching around $60 and up, but are considered great users by the majority of their owners.. Maybe I can tell more with pics of knife and sheath---

John, thanks. I have to agree on the sheath quality, I almost did not buy it because the leather just feels cheap. But I liked the blade amd stag scales so here it is. The blade measures just under 6 1/4" and its 10 1/4" overall. Condition is mint or unused. Now that I have the original bowie, whats left to collect? lol 5.25" blade and pretty much all the same shape and all etched as "Original" Buffalo Skinner

I have no idea how many Solingen Manufacturers got on the Buffalo Wagon but some that come to mind are Widdec, Boker, Linder, W. Willms, Schlieper, and Edge

There were also a lot that were simply branded "Solingen, Germany" with no manufacturer named

There were even some versions aimed at the Australian market etched as "Original Roo Skinner"  that unfortunately had a Stag's head embossed in the sheath. (You'd think that someone in Solingen could tell the difference between a Deer and a Kangaroo?)

Image below is a nice example made by Schneidteufel of Solingen, ("Schneidteufel" translates as "Cutting Devil")