When are they ready for that first knife

I read a great article the other day and wanted to share it.  With so many countries putting more and more limitations of knives, it is more important than ever that we teach our children, it is a tool.

I like that this parent asked the question many of us have...am I ready for them to go off in the woods with a knife?

Is My Child Ready For A Pocket Knife?

The kids call it ‘the woods.’ But really, it's a scrappy tangle of trees at the end of the cul-de-sac.

They discovered it this summer and promptly disappeared into it with their friends. It's where they build forts, hatch secret plans and emerge with an awful lot of mud under their fingernails. The brush is sparse and weedy so they were never entirely out of sight for long. I took a deep breath and let them go.

At the time, I was ready to give them some space and trust. They were ready to take both, of course, and that was terrifying and exhilarating. Exhilarating because it was the one thing that seemed to excite them more than video games. And terrifying because there was no way of knowing what they might discover.

What they discovered? Knives. What I discovered is that they might be ready for more trust than I am willing to give them.

I’m not sure which of the neighbourhood kids brought the first pocket knife. I do know all of my kids emerged desperate to get their hands on one. “What would you even use it for?” I'd ask, attempting to stall. But they seemed to have no end of reasons, from clearing branches to making arrows, all of which ended with some version of the phrase, “We would be safe.”

It wasn’t just a knife — it was a sign that my parent's trusted me.

In other words, they knew it was a big ask and tried to say all the right things. As for me? I would love to be excited about the idea of giving them each their first knife.

My first knife was the length of my pinky finger. It was a red Swiss Army knife, complete with nail file, tweezers, toothpick and tiny scissors that could only really cut dental floss. Each part slid or folded away neatly. It was a precision tool that served almost no useful purpose that I can remember. My parents kept a close eye whenever I was allowed to “use” it. I was six and loved it more than anything I can remember owning at the time. It wasn’t just a knife — it was a sign that my parent's trusted me.

My own kids are eight, six and five. I think that they are all probably ready. But I know that I am not ready.

After quite a bit of thought, and research, my wife and I have decided to set a firm age of eight for knife ownership in our house. And, yes, it is mostly for our own benefit. It gives us some time to get comfortable with this knife thing while still giving the kids a taste of that trust they seem to be craving. It also gives us a chance to work on our knife safety in the home, including plenty of supervised practice using knives in the kitchen.

My eight-year-old should be allowed to bring his knife into ‘the woods’ by next summer. The younger two will have their own soon enough. I hope I am as ready as they seem to be by then.

How did you decide it was time??

I believe .. always up to the parent ..as.. they know the level of their children's responsibility more than any other. Further .. there's no need for the first knife to be really pointy or really sharp i.e. give them some time to get used to handling a real knife on their own while minimizing the danger.

.
At the request of a father .. I made this one up for his 7 yr old son's b'day last yr. I purposely rounded the tip & made the edge slightly better than "butter knife sharp" .. allowing the father to gain his spouse's approval ..&.. for the safety of the child. I emphasized that I'd put a point back onto it & a sharp edge when he felt his son was ready for it.

.
There is also the child's environment to consider. i.e. I grew up on a farm & was using knives for a good year before I received my first one as a b'day gift (an Imperial mini stockman). I'd already cut myself & learned not to "push" on an open non-locking blade. When they fold .. one's index finger tends to reinforce that issue. And on the farm .. all my uncles & great uncles had a tool (knife) that they carried & used daily. This would not be the same for a child living in ..say.. N.Y. , N.Y. .. with their only outdoor experience has been Central Park & their past experience w/ knives has been .. nill.

Bottom line ..for me.. it is the parent's decision.

Things were different then I guess, 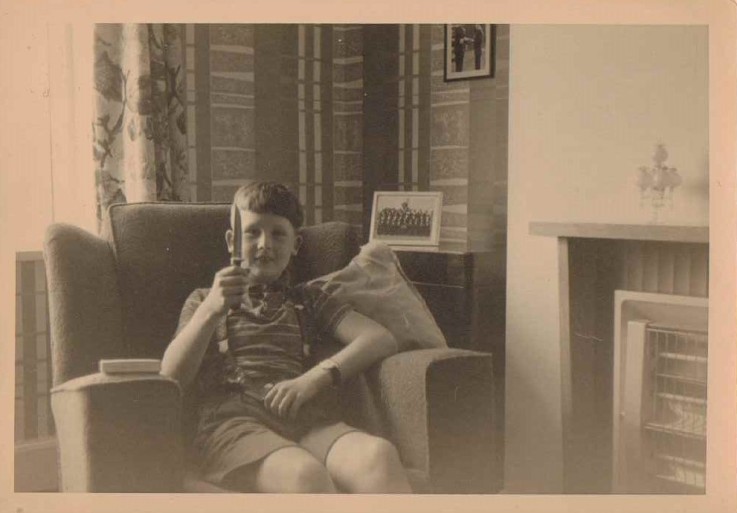 but this was me at ten years old and it certainly wasn't my first knife.

I tend to agree D ale.  Although at 10 I was not able to say my son was going to get his first knife, his son did.  He does have to leave it here for when he is with us during the summer but when here it is always on him.  I rarely see it out of his pocket.  He understands it is a tool and having it is a responsibility/privilege

Things were different then I guess,

but this was me at ten years old and it certainly wasn't my first knife.

I did Dale, I had hair, wish I still had that knife as well.

Can't remember how we handled the issue, with the girls, but basically it was done on an individual basis.  Age, as well as maturity was considered.

Currently, Kaylin (a collector, at 21) has her knives with her, while Karlee (at 18 and not really a collector) has hers in a box.

I raised three boys and living out in the country, they naturally always wanted their own knife. It wasn't until I felt they knew enough about them to understand they were by definition dangerous if not handled and treated with respect . Thankfully all three understood and I never had a problem with either of them. Fast forward about thirty five years and my brother told me his grandson had started a knife collection after visiting with me and talking about them. I only see him maybe once every few months because we live pretty far away, and I was so happy that he was starting his own collection so young, I started giving him a knife or two when I did see him . Then one day my brother called and said the kid was in trouble at school. Apparently a bigger kid had been tormenting him for a while until one day he told him if he didn't leave him alone, he would bring a knife to school and cut him! I asked my brother to bring him next time he came over and he did. I sat down  with him and tried to make him understand what knife collecting was all about and what he did was not very smart and  I could see the shame in his face for what he had said. We talked an hour or so and along with his other ,(couldn't see his collection for a month, and grounded another month)...I hope he takes it to heart. He is only ten years old and seems to get it now. I still give him a knife for his growing collection about every couple months, but I do make sure to talk to him every time now about why we collect. He is not allowed to take a knife out without his Dad's permission and I think he is doing well. I just can't be with him as much as I'd like. I know some think I should have stopped encouraging him to keep on collecting, but I don't want to shut a door that can be very good for character in a young guy. I really feel like he understands now.

This is an interesting question to me but from a somewhat different perspective.  My children are well into adulthood now but I have a six year old grandson.  I hope to get him interested in knife collecting and someday pass my collection down to him.  Now I realize that his parents are the ones to make the decision when he is ready for his first knife.  But I hope to able to influence that decision.  In a small way I have started to prepare Danny for that.  In my last visit to SMKW a few years ago I bought him a plastic toy Swiss Army knife and gave it to him for a CHRISTmas present.  At the same time I bought one of those Case wooden knife kits.  I haven't given it to him yet but I am thinking it is getting to be time to get it out and he and i try to put it together.  I think Danny will be safety conscious.  The other day UPS delivered a box.  I got my knife out to open it.  My wife called me to do something for her.  I thought I would just be a moment so I placed the knife open on the end table by our couch.  But it took longer than I thought.  When I got back to it my son had closed the knife and Danny very emphatically told me I had left the knife open and I shouldn't do that because it was dangerous.  His mother scolded him for speaking to me that way but I said, no he was right, I shouldn't have left it open.

Someone mentioned a folding knife closing on a finger.  My thinking is that his first knife should be a lockback to make it a little safer until he learns good knife safety.