The Teardrop pattern is a traditional and popular style of folding knife, with many examples dating back into the later 1800s. Versions can be seen in most of the available antique knife catalogs. (See for example: David Clark's reproduction of the 1903 Schatt & Morgan Cutlery Co. Catalog, pp. 8, 22, 25; http://www.allaboutpocketknives.com/aapk_stores/details.php?item=48.... )

A teardrop is generally a medium pattern, roughly 3.25 inches up to 4 inches, with one blade, or a primary blade with a small secondary pen blade extending from the smaller bolster. This design uses the large end to stabilize the knife in the back of the hand for strong cuts, yet still permits the user to “choke-up” toward the blade for more controlled precise cuts. The teardrop appears to be a more elegant evolution from the very old, highly functional Barlow knife pattern, with a more exaggerated reduction in size from rear to the smaller, more precise front end and blade. With its rounded rear bolster the knife is also more pocket friendly than those with square ends. The Queen version comes with a half stop – a much appreciated feature when your thumb is on the lock closing the knife. So this knife remains true to its user-oriented past. Many traditional Teardrops have an “easy-open” cut-out, but not this Queen version.

For many years Teardrops were a very common version of the basic jack knife and made in such large numbers, and used so hard that they were not considered of great interest to many collectors. That is changing and Queen's Teardrop has contributed to the increased interest in this style of pocket knife. For a number of years this was the only teardrop on the market but other companies are now offering similar (but non-locking) versions. My interest and bias in favor of locking knives has been shared previously, and extends to this Teardrop model.

The Queen Teardrop Linerlock (#6L) has been cataloged since 2004, replacing the pearl handled Senator (with or without bale) which was offered until 2003 (See Queen Historical Documents. http://www.queencutlery.com/Historical_Documents.html)

The knife is 3.75” closed with a single spear point blade of 3” in length. All versions produced have used D2 tool steel, flat ground, .12” in thickness, 1/2” wide, with a bright satin surface and standard blade etch. These blades look sturdy and large enough for serious cutting compared to knives only 1/4” smaller in length. The examples shown below have all arrived very sharp. In short, the teardrop appears to be a capable working knife in all respects, despite its rather delicate name. The earlier models have a round silver-colored “Relief Knife Q” shield. The Curly Zebra and most recent Walnut handle models have an “Incised Knife Q” shield.

The Teardrop liner lock was added to Queen modern locking patterns in the same year the 41L “mini-Hunter, and shares similar strategies in the design of the lock. The locks are made of steel and overlap the base of the blade rather than simply abutting it, providing a very secure locking mechanism. Unlike the long and serrated lock of the #41L, the Teardrop uses a smaller “domed” liner which exactly reproduces the curve of the bottom nickel silver bolster and is less intrusive to the eye, but still provides a positive grip point for closing.

There have been five different models of the knife cataloged since 2004: They include:

A model #6L W, in American Black Walnut, is available from online sellers. However, the #6L in either ACSB or W is not included in the current 2015 catalog.

Figure 1 displays the two bone handled versions. Figure 2 displays the three cataloged wood handled models and figure 3 displays the American Walnut model. Because of their relatively large and flat handle scales, these knives show off the wood used in making them very nicely. I personally like the highly figured Cocobolo model I found, but most have favored the version in the recently completed Curly Zebra series. . Almost everyone picks the ACSB as the prettiest of the bunch when I show them the full set. They are all very attractive knives, so I have collected rather than used...

A #6L CSB version with the blade etched with “SFO” for “Sharp Fans Organization (?) has been seen, and the teardrop lockblade in Cocobolo (and perhaps other handles) has been used for Oar Carver knives, with two different blade size versions. No other variants have been seen to date.

No production or sales figures are available for these knives, but our experience has been that both early versions (CSB and COBO), offered for only two years, are very hard to come by at shows or online sales. Ten years is a short time for knife collectors' “amassing stage” and it is reasonable to expect that more of these knives will become available within the next 10 years. (Like most collectors, my descendants will have to dispose of mine.) When encountered, these two early knives have sold for $80 to $100, – a bit of a premium in my opinion. The other models have all been available commercially and represent good value in a very stylish knife that has great ergonomics and the steel to be very effective everyday carry knives. As Queen continues to innovate and respond to customer demand, the Teardrop linerlock may join other earlier locking knives that have survived for only a little while and become the purview of collectors. Get them while you can, I say.

My photographs are not that special and many of you may have other examples or additional information on the #6L or opinions on the Teardrop pattern. Please join in and add your comments and images. Thanks. 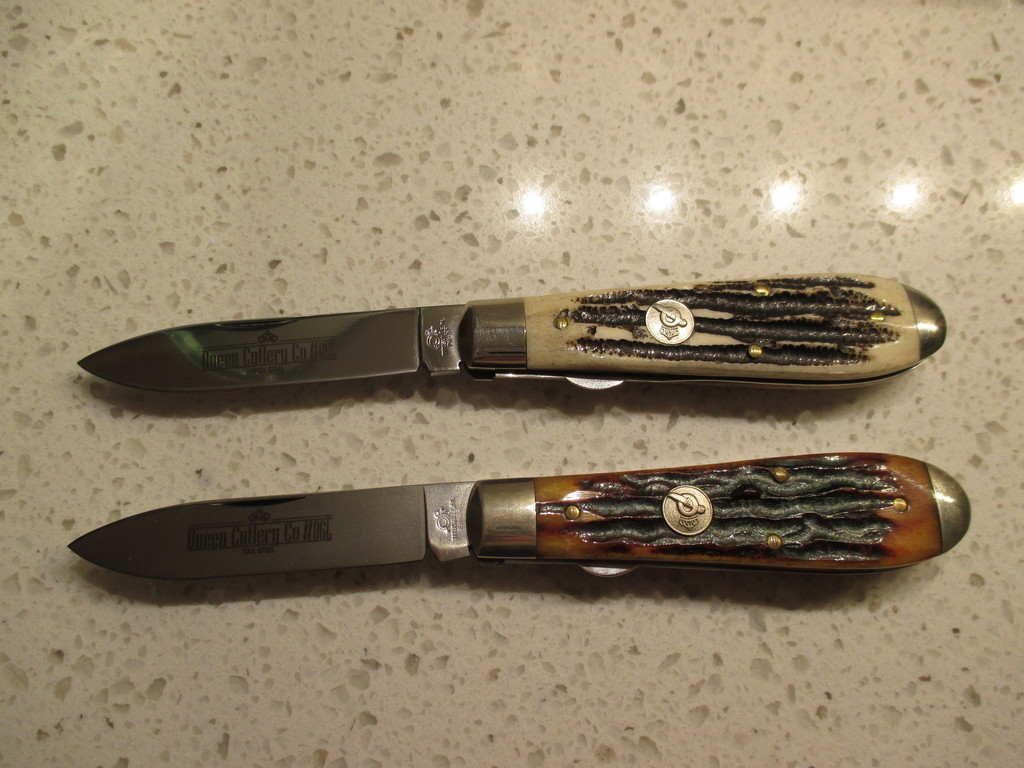 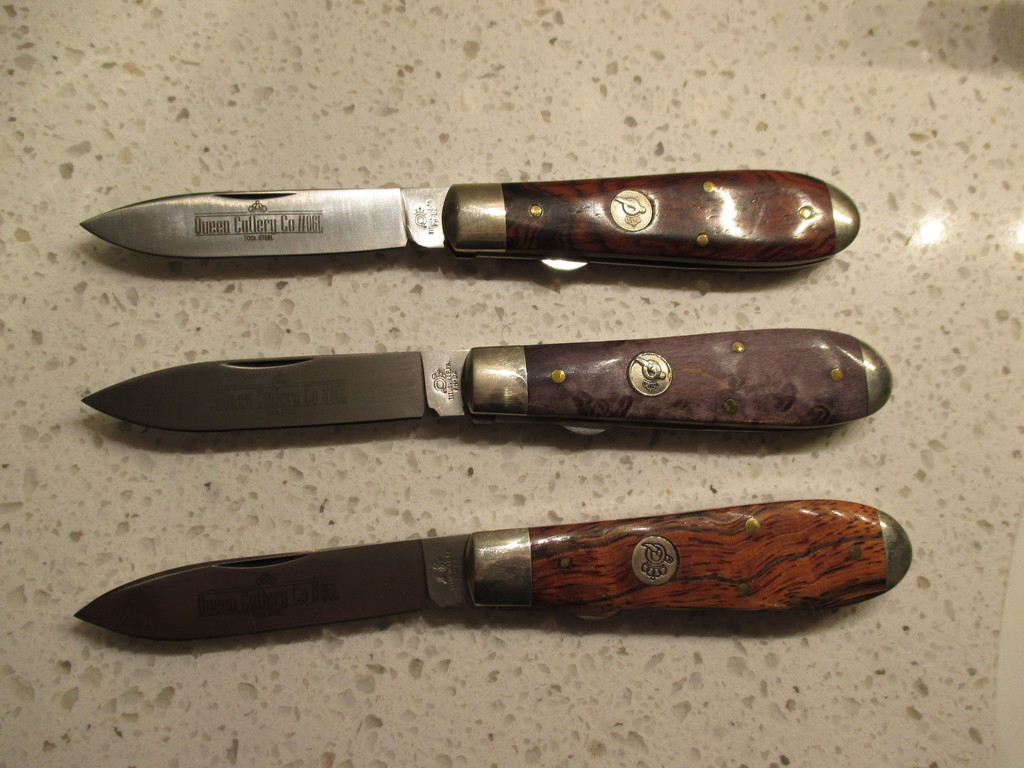 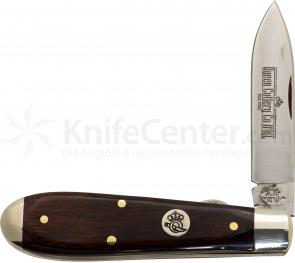 I have yet to get one of these but I'm loving that teardrop shape... much better looking that the pointier Case teardrop. 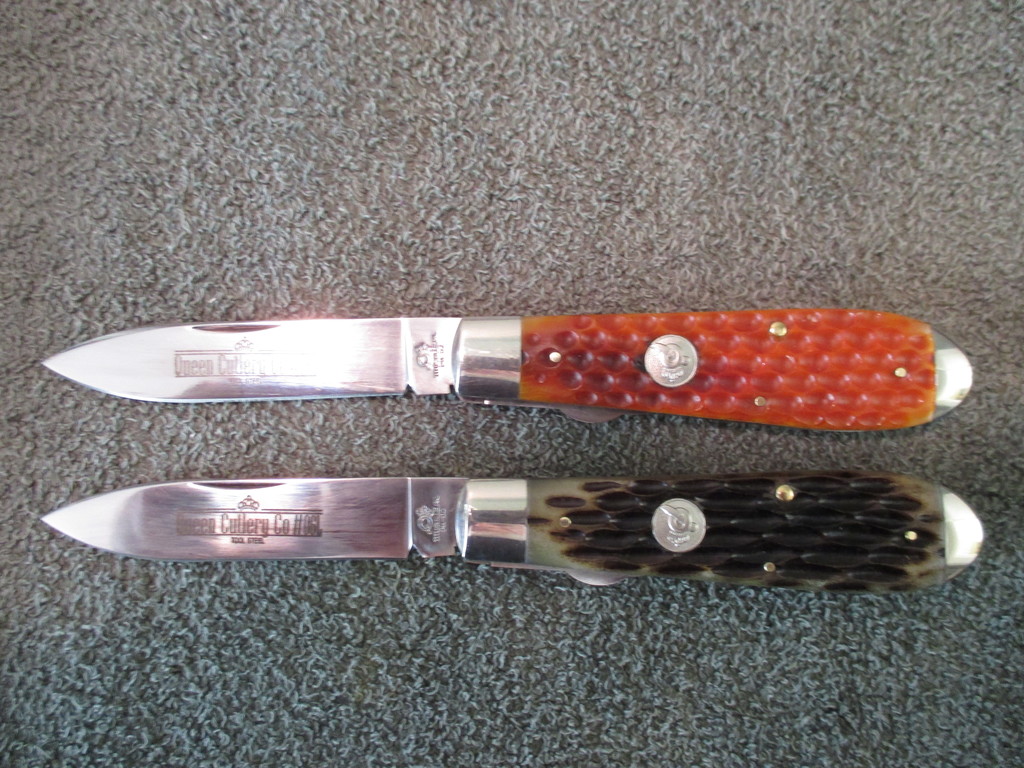 Just when you say something, you find something new - Here are two additional #6L Teardrops I got at the Knife Days show in Wilmington, OH  last week.  When a knife is dropped from the catalog, there are often some parts left in inventory and Queen has often added something and used the parts up as a "short run."

These two versions of the Teardrop are exactly like catalog versions above in every respect except they use different handle materials. Both use the more traditional relief knife Q shield. The first is done in Orange Corncob bone, and the second in a Dark Grey Jigged bone.  According to Queen, only 10 knives of each version were produced. The large, regular jigging on the grey bone seems especially nice.

Consistent with Queen's history, I also would not be surprised to see additional versions of this nice knife sometime in the future.  Out of the catalog does not necessarily mean gone forever.

Today was my mate's birthday...he's an Aussie...and darn if this knife didn't arrive in todays mail from him. I guess things really are upside down in OZ. He confirmed that the water does swirl the other way when you "use the dunny"  Actually, I guess tomorrow is his birthday because of the time difference...You know, every time I get to thinking about it..when we talk on Skype, it's tomorrow where he's at and everyone know's that tomorrow never actually gets here, so maybe he's just a figment of my imagination. but hey, someone sent me one heck of nice knife. Thank God for the half stop or I would have lost a finger...tremendous snap, and my mind does tend to wander That is so very cool that someone in Australia would send you a Queen!  and one heck of a great Queen too!

Lars Ray replied to ROBERT BETTIS's discussion How best to catagorize? in the group BOX FULL OF KNIVES
12 hours ago

Rob Myers is now a member of iKnife Collector
19 hours ago
Welcome Them!

ROBERT BETTIS replied to ROBERT BETTIS's discussion How best to catagorize? in the group BOX FULL OF KNIVES
20 hours ago

How best to catagorize?