Zero Tolerance Knives are a collaboration between Kai USA , Ken Onion and Strider Knives. They bring us a series of professional grade combat knives built to survive the worst conditions. Please share your experiences with these great blades.

Today I received my 0560, and I am thrilled to have it. It feels great in the hand and at 6.6 oz, is light in the hand and pocket.  The texturing of the Ti and G10 is grippy enough but not so aggressive that it shreds you pockets. I love it for that alone, as my 0350 frayed many a pocket when I got that.

I had read here and elsewhere that there seems to be an issue with the edge retention of this model's Elmax blade. This discussion will document my usage every other day, starting with today.

6/10/2013   Upon receiving this knife it was hair popping & paper curling sharp. Yes, that is my arm hair on the paper in front of the blade. After 3-1/2 days of normal use (ie. opening mail, boxes etc.) After cleaning the "glue" like substance off the blade, the 0560 is still hair popping & paper curling sharp. 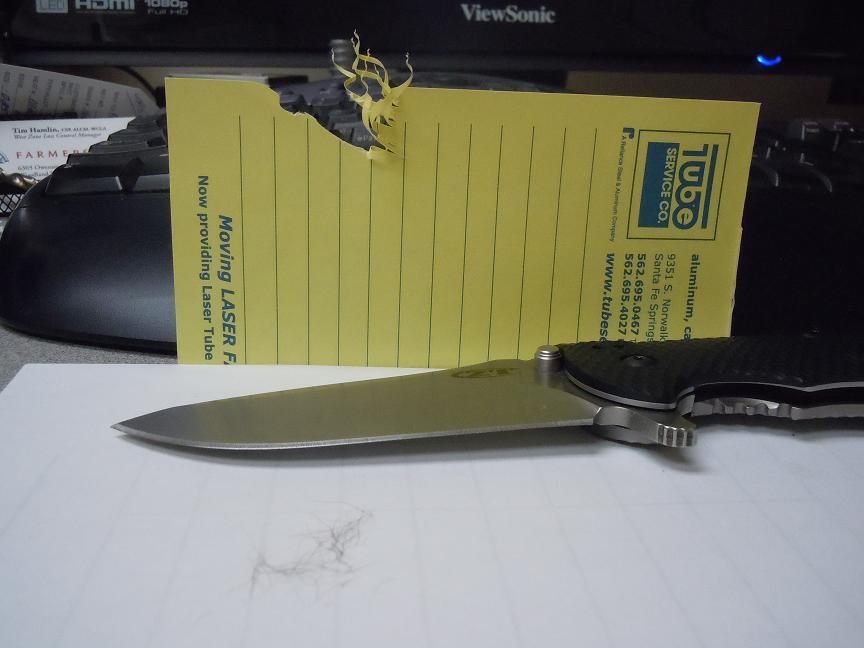 Today I had some time to cut some 3/8" dia Twisted Manila rope.

I have to say the 0560 had NO problem cutting the rope. After 25 cuts the edge was still paper curling sharp. After another 25 cuts it could still easily slice through the paper, but the fibrous material still in the factory edge prevented the fine curling of the paper. 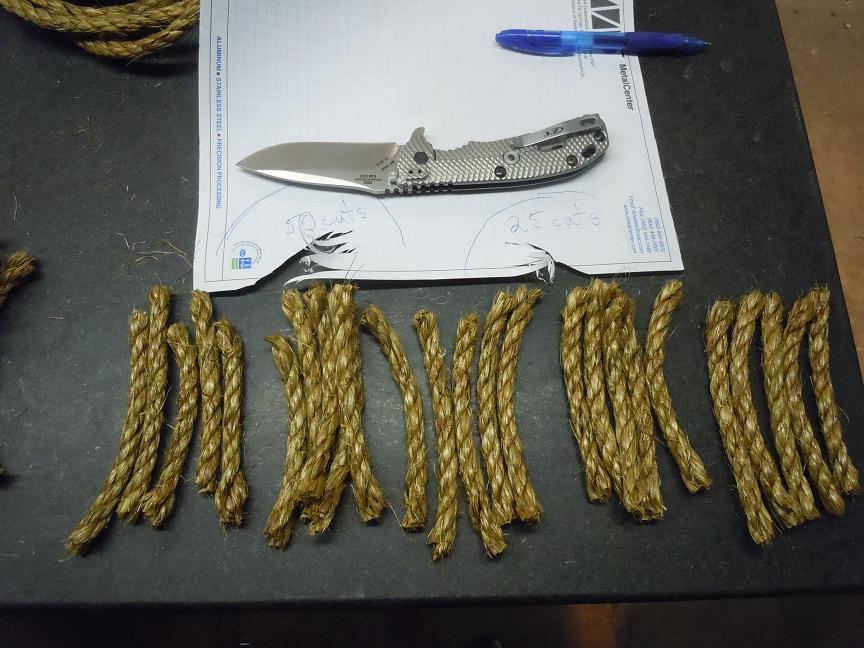 But after 3-4 passes on the ceramic croc sticks, the edge was back to paper curling and hair popping sharp. 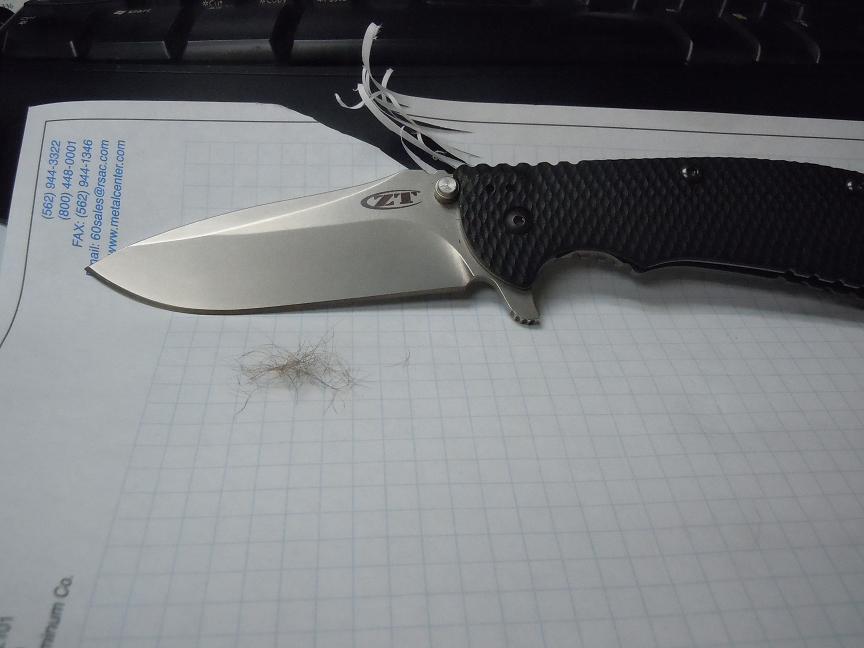 My conclusion is the edge retention of this blade is fine. If the the measure of an edge is cutting a bunch of rope and still being able to curl paper and popping hair off your arm, then I would suggest that you polish you edge so as nothing will gunk it up. Factory edges have jagged striations that catch debris, this is what I encountered after 50 cuts, debris in the striations preventing clean, precision cuts.

Hope this help belay any fears of the 0560's edges.  I am going to polish mine anyway.

Excellent if you could cut some rope and than compare the sharpness on the paper that would be nice.

Cool concept.  I never had edge retention issues on my 0560, but I'll stay tuned for your user reports.  Thanks!

What type of rope are we going to cut?

Also, still not sure what type of rope is needed to use in "rope cutting" test.  Please advise.

BTW:  I will be conducting the Wotan testing this weekend along with the 0560. As Cesar has explained, although he still awaits his knives from "Snail Mail", he is anxious to see his country's offering to Tactical cutlery be tested by me. I shall not disappoint him.

HI Brad do you have manila rope ?

I suppose I can find Manila rope pretty easily.

So, I can test the 0560 along side the ZT 0350(CPM S30V), KAI 1725CB(CPM D2), BM 581(M390) & since I am doing some extensive field testing on it the Corneta Wotan (52100 Ball Bearing steel). It should really be interesting how they fair. I imagine I would have hairless arms if I kept shaving them during the testing, so i will use the curly paper cutting gag as a control.

Nice!  Thanks for that test, even though it always made me chuckle when normal daily use for most folks doesn't involve cutting rope all day but reviewers swear by it. I do realize it is a good test parameter in any case.  Thanks again!

I agree. My normal use involves opening mail, cutting plastic straps and breaking down cardboard boxes. All of which I have been doing since taking possession of this knife. The Elmax blade's edge retention is fine enough for us normal folk. But, like most of us knife nuts, I will apply a polished razor keen edge. LOL

Just wondering what others do to either customize or modify their ZTs?

Besides the usual of clip placement from tip down to tip up, and bending up the tip of the pocket clip to aid in drawing out the folder and to act as a backstop for the hand.  I like to take a half-round file and channel out and flatten the finger groove area for better access to the thumb stud, and to aid in a more secure Dagger./ Folder Grip when used defensively (this locks in my thumb into the finger groove and wedges it up against the quillon.)  Additionally, I file and round down the front and rear edges of the scales for a more comfortable fit when carried in the waistband.

How about some fine maple burl scales on a 300. 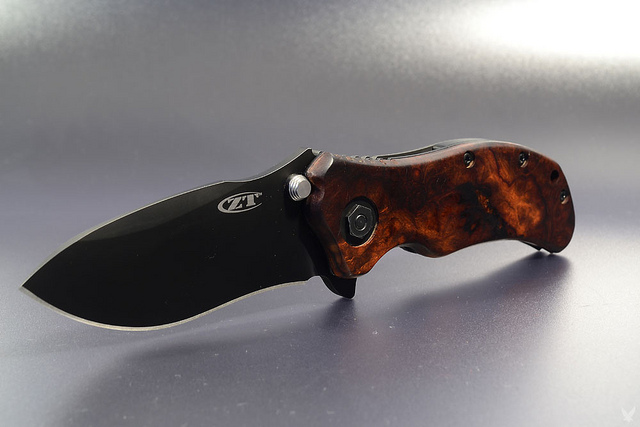 How about 1 of these 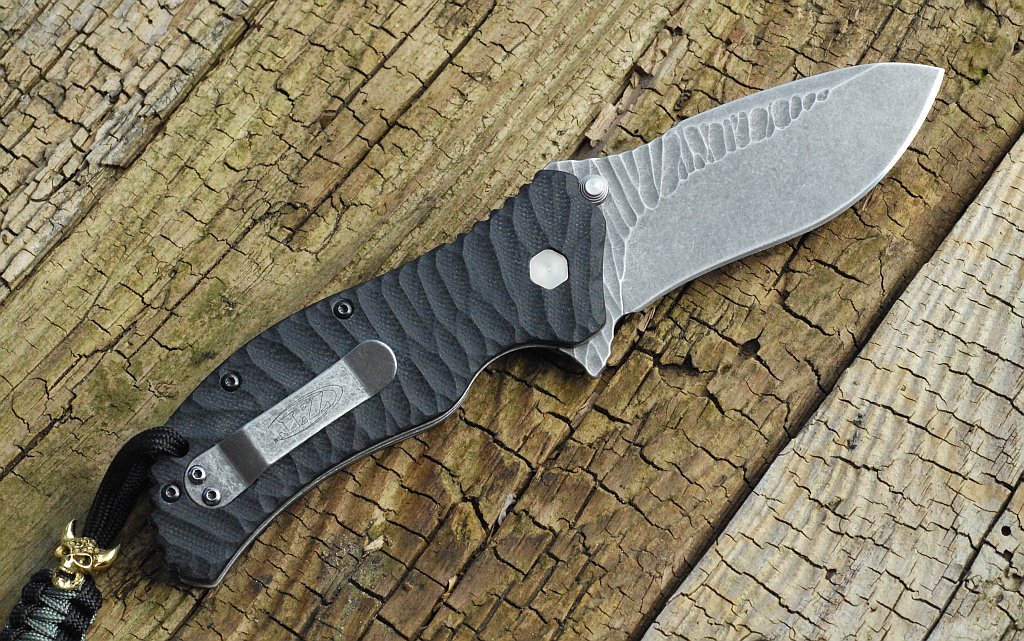 MSRP: $250.00 (like custom Emersons already commanding more upon its release!)

"The Zero Tolerance 0551 knife is a Rick Hinderer design that has been much anticipated since being announced at the 2010 Blade Show. The 0551 features a premium stonewashed Elmax blade with a plain edge and ambidextrous thumb stud. The handle has a thick 6AL4V titanium frame-lock and a G-10 front handle scale. Includes pocket clip (tip-up)".

[ignore this]
THE USE OF ANY COPYRIGHTED MATERIAL IS USED UNDER THE GUIDELINES OF "FAIR USE" IN TITLE 17 § 107 OF THE UNITED STATES CODE. SUCH MATERIAL REMAINS THE COPYRIGHT OF THE ORIGINAL HOLDER AND IS USED HERE FOR THE PURPOSES OF EDUCATION, COMPARISON, AND CRITICISM ONLY. NO INFRINGEMENT OF COPYRIGHT IS INTENDED. 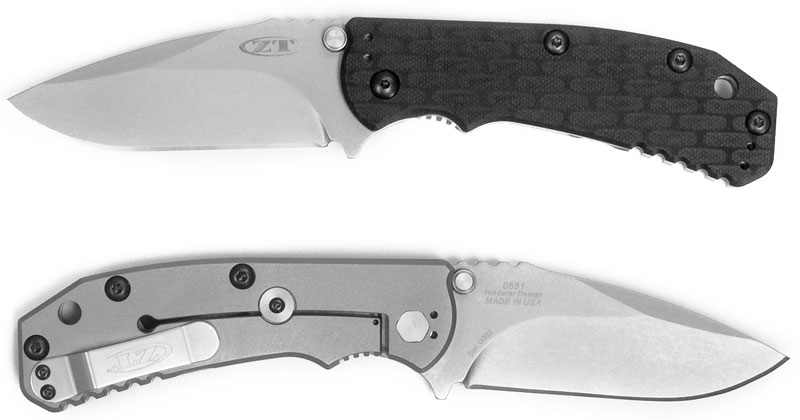 Zero Tolerance limited production 0551 with a superior blade composed of stonewashed Elmax. The Elmax blade steel holds a great edge and is highly corrosion resistant. The knife itself is overbuilt with a G10 handle and full Hinderer titanium frame lock. ZT designed this knife in collaboration with Rick Hinderer. Made in USA.

Limited Edition only 1000 pieces made.  MSRP:  $250.00  But, it is already commanding way more on the secondary market since its release!

I have one due in the mail this week. Shipped on Friday. Woo Hoo! I also have the 0550 coming in a few weeks. I am told they are due any day. Fine quality knives for sure.

Even better, It came today. Here is my ZT 0551. Sweet knife. Built like a tank and just plain nice. 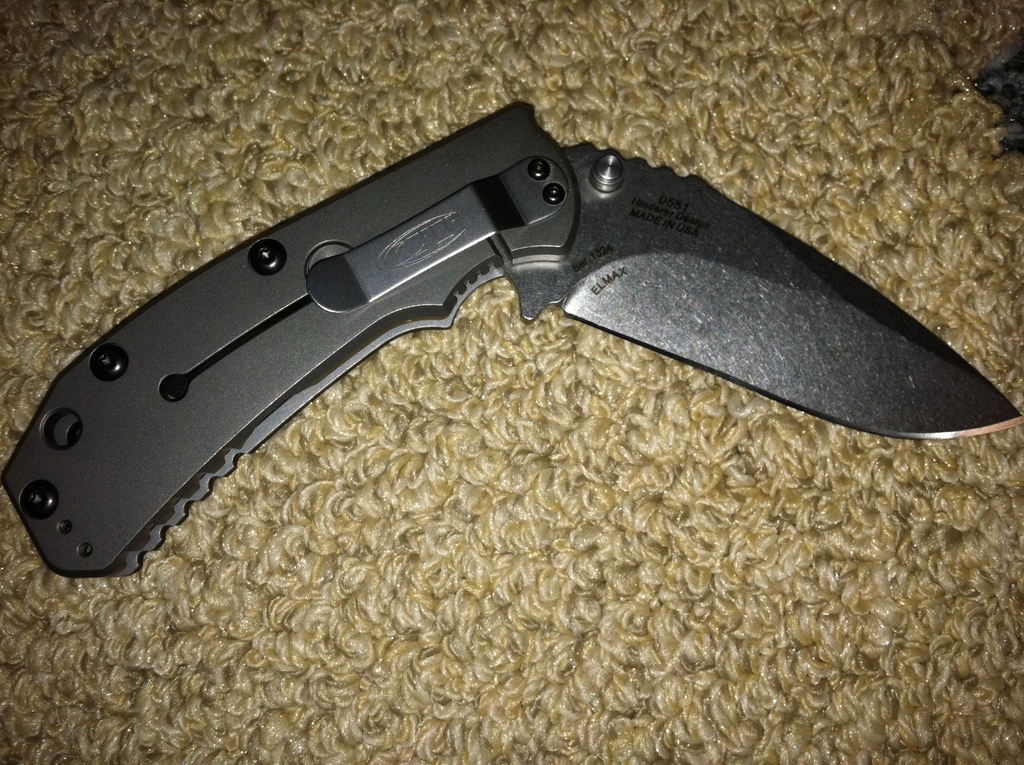 I recently lost out on getting one from a friend for $200, I made the mistake of referring him to a co-worker who I thought would be interested but not in the market. He got the 0551 for 2 bills and a Benchmade Subrosa for 180. NIB never carried. My friend has a "Randall" addiction.

Kenneth W. Hill replied to Jan Carter's discussion What will be your next knife? Production schedule in the group Great Eastern Cutlery hosted by Ken Mundhenk
17 hours ago

Kenneth W. Hill replied to Jan Carter's discussion What will be your next knife? Production schedule in the group Great Eastern Cutlery hosted by Ken Mundhenk
yesterday

Kenneth W. Hill replied to Jan Carter's discussion What will be your next knife? Production schedule in the group Great Eastern Cutlery hosted by Ken Mundhenk
Thursday