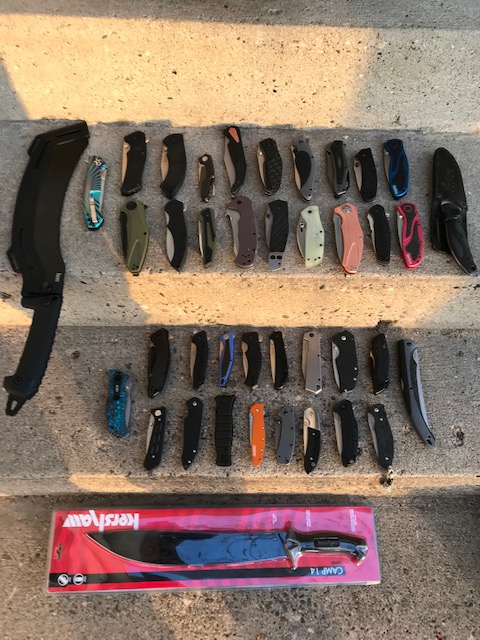 Okay, technically it's a KAI family photo, since there are 2 Zero Tolerance knives in there (left-most folder, one on each step -- upper step has the 0452, lower step has the 0350, both with scale mods -- I know, fancy, right?).
I made a quick gathering of my (primarily) Kershaws after being inspired by a communication I've had with KAI -- I might get into that later, but not now. A few gems didn't make it in there, but I was in a bit of a rush to get this photo done. That'll just be motivation for another family photo...

I'm hip to what you're saying....some pieces are just too important to take out of the wrapping. Although I am from many places, I am of Oregon....large Slavic and Scandinavian communities all throughout Northern OR. Naturally then my go-to brands are Gerber & Kershaw. When in jeans, I carry the Kershaw Scrambler - a great workhorse of a knife. But as a bank employee where the ratio of women employees are 8 to 1 to men, they find the Scrambler a little threatening. So I opted for for the more gentleman style of the Crown and Crown II. These have soft lines and are gentle to hold - much less intimidating in an office environment. The Crown II stays in my desk, while the Crown stays on me.

But I gotta give you center stage on that fantastic array Kershaw's! It's certainly a family to be proud of. Between your Kershaw's and Vinnie's Puma's, I don't stand a chance of winning the Academy Award for "Best Knife Documentary Feature".  :-)

Lars, your knowledge is impressive -- we clearly have similar tastes, & I must say, your have excellent taste.  :)

Good spot on that Crown -- I actually have another Crown (also still in the package), but that's one of the blue Crowns, I just can't convince myself to take it out of the package (can you tell I've spent some time in comic book stores?).

That's NOT the reason the Camp 14 is still in the clam pack though.  I really, really like the 14's size & profile -- so much that I just tend to use other machetes when I need one (my current favorite beater is the Cold Steel Slant Tip 18" machete).  So while the blue Crown is (in my mind) a collector's piece, I just like the Camp 14 too much to risk damaging it...  Somehow my Camp 10 didn't make it into this picture (it's just off to the side), but I've actually used that one!

On a trivial note:  I contacted Kershaw about the Vedder & yes, in fact, it was named after Pearl Jam's Eddie Vedder.  And yes, I think that's pretty cool -- the Seattle music scene was pretty important to me back in the late 80's & early to mid 90's.

Never mind you mixed in 2 Zero Tolerance knives in there (always room for a little showing off in family photos!), but what's that at the bottom center...an unopened Camp 14? Wait...what?

What are you waiting for, another free shipping weekend from Knife Center? Get that bad boy opened....it needs to breathe!  :-D

Great set.....and I love that Crown bottom row, 6 over! You have really "stepped" up your game with these!

Lars Ray replied to Nicholas oliver's discussion I have a rather large buck knife that is really awesome.
6 hours ago

Ray Ogilvie is now a member of iKnife Collector
18 hours ago
Welcome Them!

Featureddead_left_knife_guy replied to Tobias Gibson's discussion Which steel would you choose?
Saturday