iKC is home of a very diverse group of knife enthusiasts. All you have to do is set the photos to slide show and you will see. Because of our wide range of knife likes, not everyone here is a traditional pocketknife collector, per se, and yet, Case is one of the most popular knife companies in the world, so I thought I'd share a couple of things about my trip. 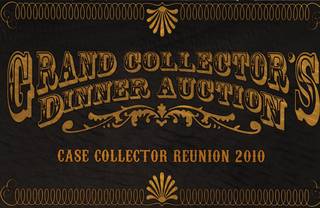 Yesterday I returned from my trip to Bradford, Pa. where I attended the W R Case Collector Reunion. It is a really bid deal to a lot of collectors. While I don't know the official count, I'd say there were at least a couple thousand collectors and their families who attended the reunion. Truth be told, I don't know if I'd have made the trek from Alabama had Case not asked me to be the auctioneer for their Grand Collector Auction where they auction a highly select few special knives. This auction was no different. There were only 13 lots (either a single knife or a set of knives) in the auction and it only lasted a little more than 30 minutes, but to many in attendance the auction is the grand finale of their time there. I don't say that because I'm the auctioneer :), instead, seeing Case's one of a kind- mostly prototypes, sell for thousands of dollars is fascinating.
I've posted a couple of auction videos of two lots I think you'll enjoy watching. One is the a huge Texas Toothpick (3X its normal size) and the other a pair of ivory elephant toenails/sunfish knives (may favorite).
I had the opportunity to meet many fellow iKC members there too. One of the aspects of iKC I enjoy the most is getting to know like-minded collectors. Then getting to meet them in person is icing on the cake. I meet Jim Prather, Bob Picklesimer, Gerald Hines, Jack Crook & Lynn Page. Then others I know and have previously meet, who were there, included Roger Cunningham, Ken Mundhenk, Gary Kennedy. I'm sure there were others who I ran into and didn't realize there were iKC members too. While I was out and about, I was busy spreading the iKC news too.

I'd be remiss not to mention our Jack Crook, who serves as the Case Collector Club's president, was announced as among the very first Case Ambassadors. This designation is the highest award by Case and is a big deal. Congrats Jack! We are proud of you and appreciate all you do to promote our hobby!
If you like traditional knives, or are a Case fan, make sure you plan to attend their next Reunion in 2012. It's a blast! Who knows one day we might have an iKC dinner the nite before too! :)

Comment by Lynn on July 23, 2010 at 9:58
Scott it was a blast at all the things going on this year at the event! It was great talking and visiting with you the auction is probably just one of the many highlights that Catie and I enjoyed! It was great to see old friends and make many new ones. The displays in the first tent really caught my eye with all the new knives coming out this year, I can honestly say CASE has out done them selves this year and hope it continues! Scott maybe one of these days I can get over your way and see them funny looking Toe-Nails of yours, just picking of what I have seen ya have some awesome knives my friend!!

Comment by Jack Crook on July 20, 2010 at 18:42
Thanks Scott we all had a great time, but just as a correction I am NOT the president as the CCC Forum is just a loose knit bunch of fellow collectors, I organize our Forum Dinner which I am glad you attended, and being named a Case Ambassador ws a surprise and a great honor, and you were supposed to stop that auction after I bid on those great Linda Karst Scrimshaw Toe's...

J.J. Smith III commented on Rome D. Rushing's blog post I did it again.
9 hours ago

Jan Carter left a comment for Gary Handler
9 hours ago

Gary Handler is now a member of iKnife Collector
9 hours ago
Welcome Them!

A blog post by Rome D. Rushing was featured