I sort of backed into collecting these.  I got this 94 first.  It was given to me a few years ago by a vendor rep that I bought equipment from while employed by TVA.  I put it into my collection because of what is engraved on it. After I joined iKC and became more interested in knife collecting, I was searching the internet trying to find out more info on these tools.  I saw some for sale on eBay and on a whim put in the minimum bid of 99 cents on this number 9.  I won the bid because no one else bid on it.  The shipping brought the total cost to just over $3.00. 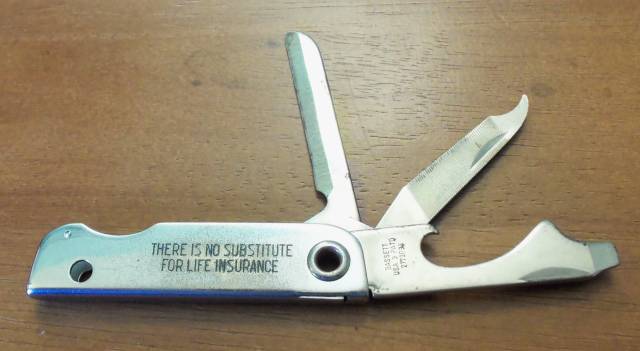 I then started browsing eBay and looking for knives with low minimum bids that no one had bid on.  Now that I had two Bassetts, I placed more bids.  I won 99 cent bids on this 80 and this 79.  The shipping made the cost of each between $3 and $4. 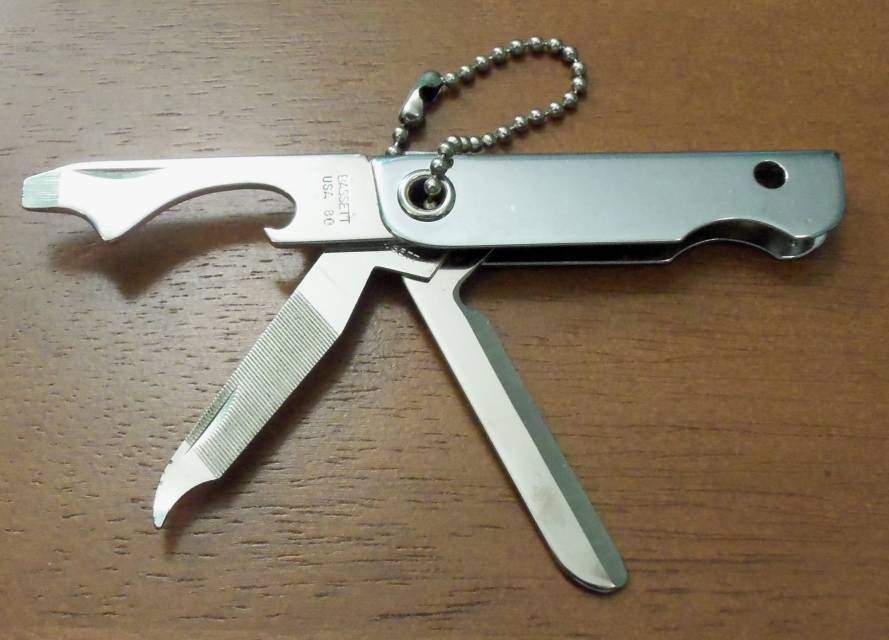 I next found the sailing ships scrimshaw multi tool.  It was a Buy It Now.  I don't remember exactly what it cost but it was low enough that I bought it.  It is different from the other four in that it has two different numbers on the blades, an 89 and a 90.

The last one, the duck scrimshaw just came today.  It was a Buy It Now for $11.99 with free shipping.  I watched it for about two weeks trying to decide whether to buy it.  Just before it expired I decided to buy it.  It also is an 89/90.

The sailing ships scrimshaw is signed MW but there is apparently no signature on the duck scrimshaw.  So far I have not been able to identify who MW is. 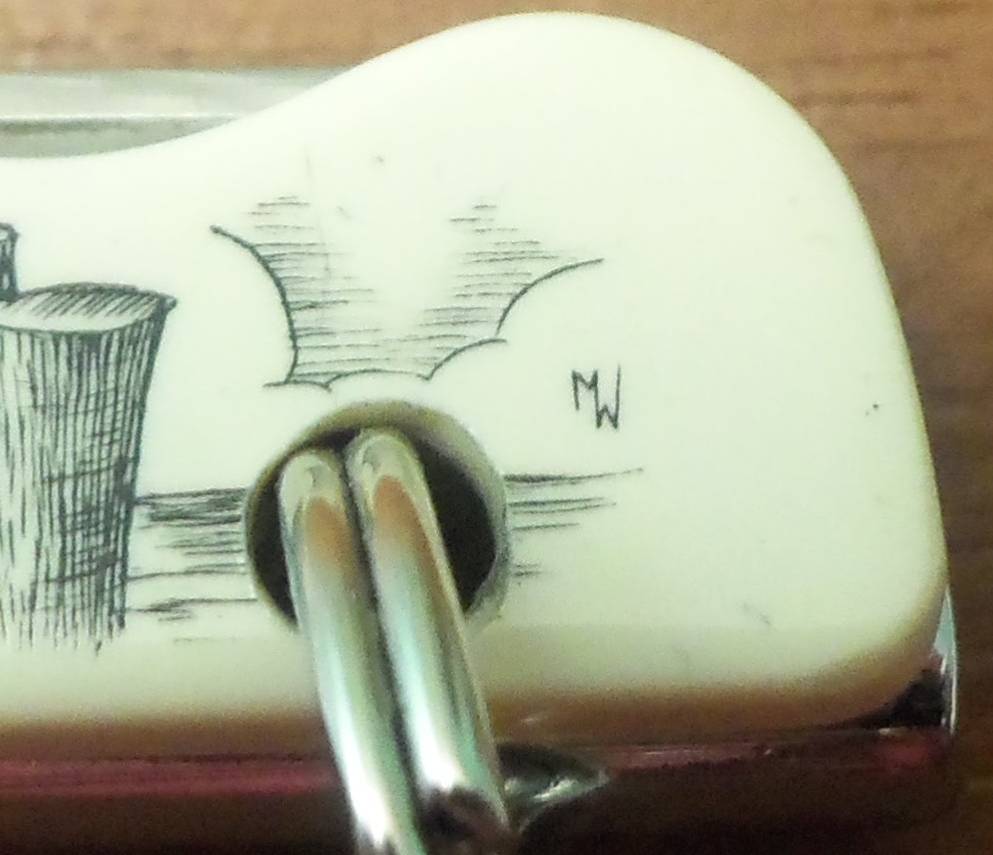 As I mention earlier, the first four only had one number on the blades.  But both scrimshaws had 89 and 90 on the blades.  I don't know if it is unusual for Bassetts to have more than one number on them.  Is it just coincidence that both scrimshaws have the same two numbers?  Could it be that the same person did both even though one is not signed? 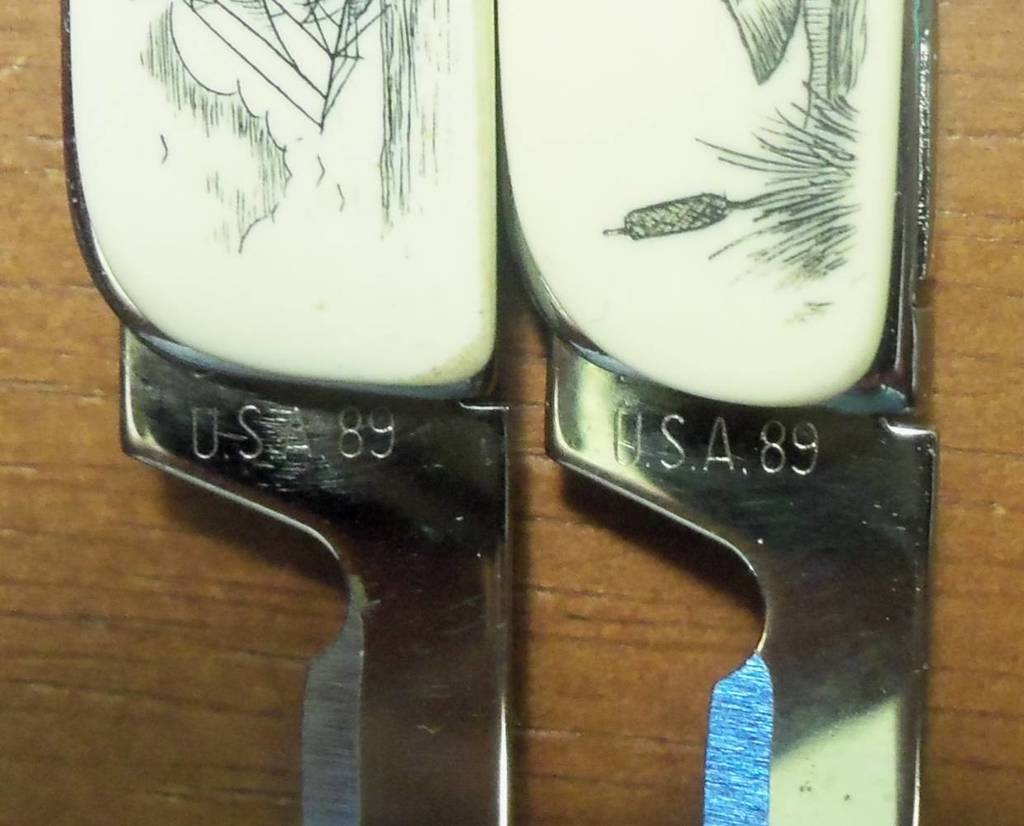 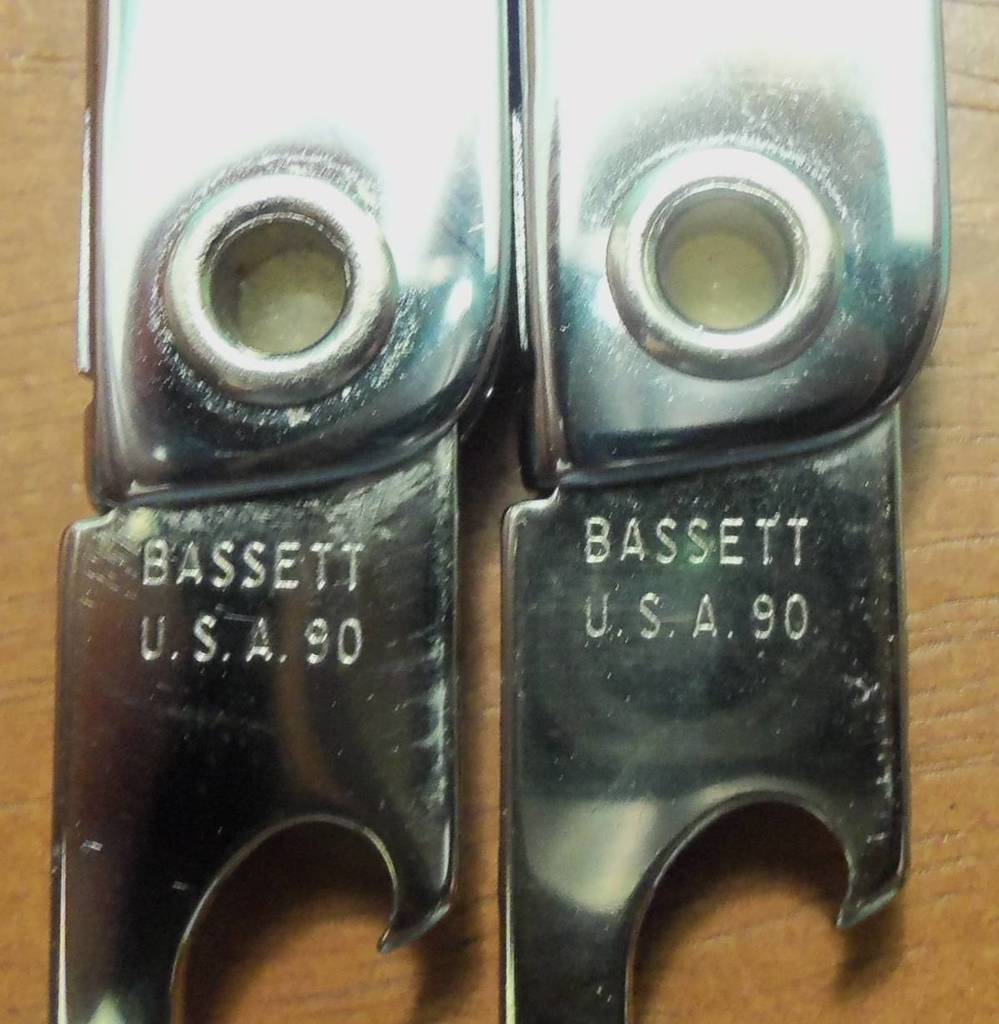 I know these are fairly common and ordinary to collect but there seems to be a lot of variety in them and they can be had for not a lot of money.  I don't at this time know if I will collect any more of them or not.  It just depends if I find one that catches my eye and isn't too expensive.

My main focus right now is on Case knives.  In fact I have two of them on order right now.  I was expecting them this week but they didn't come.

Got to say that seeing these made me smile. Seemed like everyone had one on there key chain when I was a kid.

I wonder if they are shutting down the factory to move production to China?

i WONDER IF THEY ARE REBURISHING THE FACTORY TO MAKE MORE TOOLS?

Unfortunately I cannot tell you anything about the number on them because I don't know enough about their production. I guess it's because we always take things like these little Bassetts for granted - never pay much attention to them - until they're gone!

Wow, those are great, Charles. I had no idea, their name was "Bassett". IKC is a place to learn, I thank you for that.

It is sad to see yet another US manufacturer shut down.

That's a real nice collection of Bassett products. It brought back memories of my father. He always carried a Bassett on his key chain.

Bassett tools are made in my backyard. The company HQ and factory are located one town away in Shelton, CT. Now the bad news! Starting this March they began a nine month permanent shutdown of all operations.The W.E. Bassett Co. was founded in 1939 in Derby, CT, and moved to Shelton in 1978. A little more than 200 folks worked there. It was a privately held company until Dec., 2012,  when California-based Pacific World "merged" with them. The CONNECTICUT POST reported that a number of the employees were shocked about the shutdown. Bassett management had told them the merger was a good thing because it would "preserve the company", so the folks thought the Shelton operation was "safe".

Bassett produced the TRIM line of personal products like nail clippers, tweezers, files, etc. and those great little multi-tools. As a matter of fact, the nail clipper as we know it today was designed by W.E. in 1947 using new manufacturing methods. There will be plenty of Bassetts/TRIMs around for a long time because they made zillions! But I'll bet if you go into a CVS or Walgreen's in the near future, you won't be seeing anymore Bassett-labeled TRIMs. There might be a good chance that they'll be made in China also.

Charles.  You might want to send a message to NKM and see if he can locate any info on them in the library.  Might take him a little while, the museum keeps him pretty busy

I have looked on their website (trim.com) and the little multi tools are not listed there.  They have nail clippers, tweezers, scissors, and what they call beauty implements.  They say the company is located in Connecticut but don't specify where their manufacturing facilities are located.  They have a picture of a building with their name on it but what you can see looks more like an office building than a manufacturing plant.  The company was started in 1947.

KnifeMakerJohn Burrell is now a member of iKnife Collector
Sunday
Welcome Them!