How I got started:An 8 year old boys brother who was 10 years older than he, gave a very special gift once. The brother came home from the Navy in 1956 on leave and brought his younger brother a 4 blade Imperial knife. The boy was so excited he cut himself with it that very day. His Mother took it away for awhile, and in about a year gave it back. The boy carried it proudly and loved that knife. One day in the 5th grade the teacher had the students do handstands, while the boy was attempting his turn, you guessed it, the knife fell out of his pocket. The teacher took it away. The boys Mother went to the school and got it back. The boy again carried it proudly thru many years. Today, that very knife is in the boys collection and one of his prized knives. Not because of the value of it, but because of the great story it tells and in memory of the one who gave it.          That 8 year old boy was me.

From then on - thru Boy Scouts, School, and Farm Work I used a knife a good bit but thought not much beyond the knife in my pocket - which for the most part was that first knife. Then into the military and quickly got attached to my Camillus Fighting Knife. After the Military, back to the farm and various knives for farm use. It wasn't until about 20 years ago, I met a guy who was a wheeler dealer. He could buy something for a dollar and sell it for ten. He was also into knife collecting/buying and selling. So with him, I got interested in knives. It was fun for awhile and I collected a few. I couldn't hardly sell a knife that I bought to enjoy so I kept most of mine. I soon drifted away and a few years ago I got interested again. My collection is still small but I sure enjoy them all.          EBAY THOUGHTS; I for one like Ebay. I am out here in the sticks and not very close to many knife outlets or collectors. Shows are few and far between. So if I want to see any knives for sale, its Ebay and I have bought several off this auction site. I have only received 2 knives that I was not to happy about, but that's not to bad.

I love an old knife. A Knife that I like to carry,
has to feel like it fits, in the scheme of things, its been somewhere, it has a
story to tell. My imagination at times runs wild. Yet as I carry the knife, one
that fits my hand, my pocket, my needs, I am also making history, if that knife
could talk, it would talk of others and also of me. A knife to me is like a
diamond to a woman, I treasure it. I care for it, keep it oiled, keep it clean.
So when it talks again, it will talk of fond memories, like I have of it.

I presently collect: Any knife that I take a liking to. But esp. Cattaraugus, Robeson, Remington, Kabar Olean NY, and Camillus 4 liners. 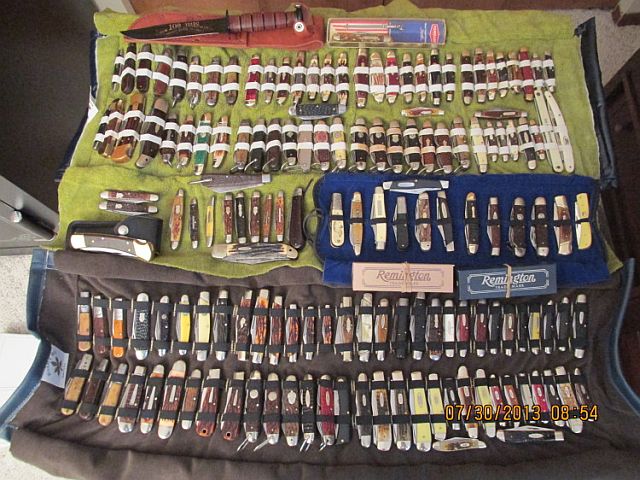 The knives that you may have gotten from your father or grand father or even an old friend, are priceless. They may not be the most highly collectable or valuable knife you have but have a value you can't put a price on.

Hey Grant, those first knives sure are special and priceless. Wouldn't trade mine for anything. Thanks for posting, I enjoyed hearing about your first knife also.   Ken "The Talking Knives"

This is one of my favorite sentences in a great story

I presently collect: Any knife that I take a liking to

Thanks Brad, I am not sure if you could call most of mine "Choice" - but I enjoy them and do not buy to re-sell or for value, I buy because I like and enjoy them. I know you have some nice choice examples also.

I hear you, and understand the start and stop and start again.

Nice little collection you got started there. A tad bit more specific than my own which would explain my calling it "little". I am also sure your pieces are "Choice" examples, whereas mine run more in the "Good Used condition" area.

Ron, I may need an intervention, but no thanks, I don't want one. lol and thanks.

Robert, I can't wait to hear about that trick. I need all the help I can get.

Thanks for the story and pictures. I am out in the country to and use Ebay to find knives and prices. I have learned a trick about Ebay, I'll tell you about it one day.

Ken - You need an intervention! lol

Jan Carter left a comment for Michael Leonard
9 hours ago

Michael Leonard is now a member of iKnife Collector
9 hours ago
Welcome Them!