Not two knives, but two different manufacturing periods. If you have looked at many Schrade-Waldens you will find that you will come across some that don't look like others, as far as machining, grinding, and handles. Those with celluloid handles and bone look exactly like Schrade Cuts, but are stamped "Schrade-Walden". Exactly. The second Schrade-Walden you'll encounter is made exactly like their later "Schrade" marked knives. Exactly...machining, grinding, everything. And the'll have Delrin/plastic handles.

No, they aren't the same in value.....or at least shouldn't be. The Schrade Cut. look-alike should bring a good bit more.

Okay, how do I know this? Let me first say I'm NOT trying to blow my own horn here, or trying to "name drop"......okay, I like to name drop. LOL! I'm just stating facts and history. Remember Jack Webb? "Just the facts ma'am".

Back in the 80's I had one of, if not the largest, Schrade-Walden collections in the Country. I sold the whole collection to Kevin Pipes and crew lock stock and barrel.....except for the two below.

As I started collecting Schrade-Waldens, I noticed the differences. I wondered about it, and worried about it until it drove me nuts! I started writing people (the days before the internet). I got phone calls from Herman Williams (Schrade-Cut. super collector, customizer, and Schrade's repair man), Houston Price, and Bernard Levine.  They said my theory was very interesting, and would help me look into it.

Houston Price and Bernard Levine then asked me to write the Schrade sections for their books; Knives & Their Values 2nd Edition and Official Price Guide to Collector Knives 10th Edition. I was honored to say the least! And felt humbled, because I thought "Why would anyone think I know anything?". But I did a heck of a lot of researching. I was obsessed with it...and Schrades!

And this is what I wrote in 1991 from the "Official Price Guide to Collector Knives 10th Edition By C. Houston Price; (Herman Williams, Houston Price, and Bernard Levine concur.)

"This book's first listing of Schrade knives consists of those produced from 1904-1947, stamped "SCHRADE CUTLERY CO., WALDEN N.Y.". The next listing includes some of the knives produced during the era of the "Schrade-Walden" stamping, 1948-1973. Knives produced during the first ten years of this period are becoming as popular with collectors as the older "Schrade Cuts", and their values are usually nearly the same. When Schrade's knife production moved in 1957 from the Walden factory to the Ulster factory in Ellenville, construction changes included a switch from bone to delrinand to different blade finishes. Knives produced during this latter portion of the Schrade-Walden era are not included except for those listed in the commemorative section. Their values are generally less than half that of knives from the early Schrade-Walden era."

The Walden factory is where the "Schrade Cuts" were made, therefore, the early Schrade-Waldens were made exactly like the Schrade Cuts.

I hope you found this interesting. And PLEASE do not ask me questions about Schrade knives! Why? In all the years since I collected Schrades, and researched them like a mad man, I have grown old, and I have forgotten more than half of what I used to know better than the back of my hand about Schrades!!! Sad, but true! 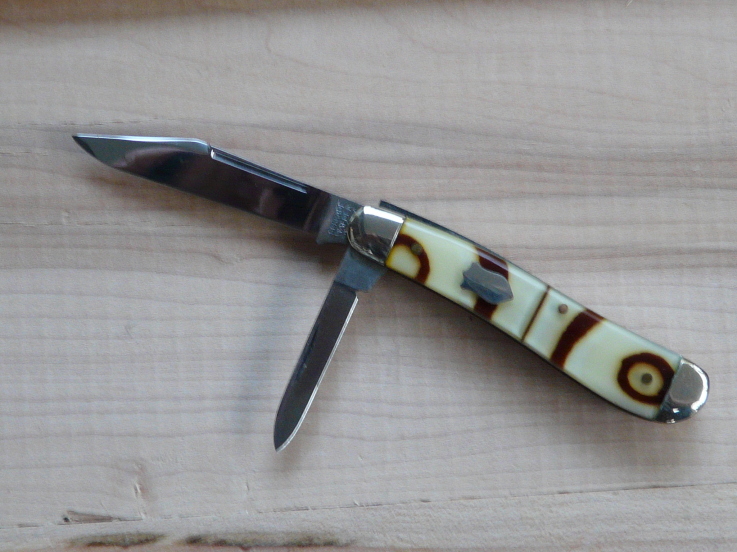 Thanks Hog, I appreciate it!

Yeah, that's one reason I couldn't let it go! Those two were two of my favorites in my collection. There was one other I wish I kept; a Peach Seed Bone Whittler. I sold that one to a guy in Norway. Actually there are a bunch I wish I kept. Hindsight.......

Funny you mention Jim Parker. I'm going to name drop again......a good friend of mine was the President of our local knife club back in the 80's. And HE, was best friends with Jim Parker! When we had our club knives made Jim Parker said he'd make them for us. We had 150 made using the Parker Mini-Trapper in genuine pearl and our club logo etched on the blade. It was the first time Parker made club knives. Our second club knife was a Parker Whittler in pearl again, only 150 made. After that we contacted Ernst Felix, Chairman of Boker to have our club knives made for us, and it was the first club knives made by Boker.  Ernst Felix even used to come over for our Christmas meeting.

Okay on to more important things..........celluloid. I have kept that, and over the years many other, celluloid knives with all the rest! I never had a problem! Celluloid is funny. Sometimes it depends on the color....some colors head south before others! And it can depend on the temperatures and humidity. Summer or winter we keep our house fairly cool and with low humidity, so, maybe, that's why I've never had a problem. Now that I've said that, that Schrade-Walden in celluloid and a old Camillus I have in celluloid will start to deteriorate! LOL!

Not only was your post interesting, but it read like a veritable who's who of the knife world. I'm surprised that Jim Parker didn't manage to get his finger in that pie somehow, too! lol.

It was a very keen observation on your part to begin with. Thanks for sharing that bit of Schrade-Walden history. I enjoyed the lesson, professor!

That sure is a right-purdy little knife -- the one in peach seed bone! And the celluloid on the other one looks to be in real good shape, also. I a little surprised that the bolsters look that good on it. I'm sure you keep it segregated from your other knives, though, don't you? I've seen and heard enough horror stories about celluloid and the gases they can emit to to keep me from buying any of those old beauties, like that one.

I'm curious! Have you ever had any bad experiences with celluloid handled knives?

Jan Carter left a comment for jim buda
15 hours ago

Jan Carter left a comment for Alex Ruvinsky
18 hours ago