Do you feel the need to EDC a traditional folder?

I grew up carrying traditional knives and though I now carry a Tac folder, (Benchmade Grip., Emerson Mini Com., or CRKT M1 usually) and a Leatherman Juice CS4, I feel like I should also carry a trad folder.  Currently I am carrying a Case Mid Folding Hunter in Gray Bone, which I love.  I switch it out with  other various Case and other brand trad folders as well.  I do it partly because I want to be able to take something out in public that won't scare people, nor make them think I am as much of a knife nut as I really am, but also because I just can't seem to break myself of the notion that a man ought to have a traditional pocket knife with a bone (or other natural material) handle on it.  Am I alone here or does anyone else feel the same way?

In the UK we are only supposed to carry slipjoint's , so mostly that's what I do but it's not a good idea to abide by the rules all the time !

I grew up when my brothers, father, & grandfather all carried Case traditional slipjoints-Stockmans, melon knives, etc. My first knife when I was very young was a Case stockman. When I first started collecting knives 40+ years ago, Case was the obvious choice for brand and I chose trappers for the mere variety available- Now that I am much more vintage my knife collecting has loosened to vintage knives of any maker. I own a few tacticals, but due to old habits, prefer the old slipjoints in my pocket, as a rule. My one and only exception-- I often EDC  a spyderco Spydercard- The only knives in my rather large collection with a duplicate of the same knife-- The reasons-- The unusual thick blade and AUS 8 steel will  dang near cut anything, including metal straps on packages.-Credit card ultra slim design makes it undetectible in a back pocket,etc. I use it as an EDC, but it has rapid one handed deployment in a self defense scenario and would probably scare the heck out of an attacker.-- If I ain't carrying a slipjoint, this is my go to. 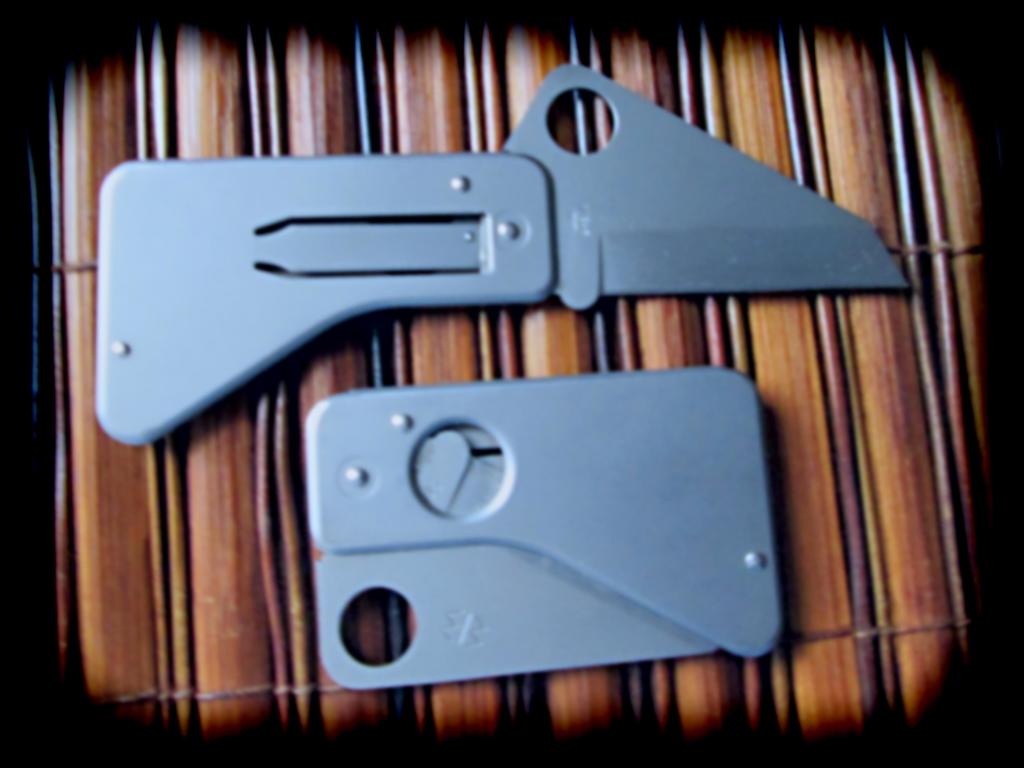 Emory, the traditional patterns I grew up around, along with those that I owned, tended to be pretty low quality, &/or small, &/or dull or otherwise unimpressive.  In other words, cheap crap, almost all of which was upstaged by my dad's lockback Sharp 300 with leather sheath.  My father never treated it as a thing of beauty, just a decent tool that worked.  Anyway, my parents & grandparents carried knives but they weren't really anything worthy of their identity, just something they knew they'd need throughout the day.  I just don't have the same emotional ties to traditional patterns that a lot of others might have.

But I do understand the value in having a knife that can be used in mixed company, & traditionals are often viewed as non-threatening (though the same would likely not be true of the Queen Mountain Man styles of had a long-running fascination for).  Another favorite alternative of mine is the CRKT Folding Stubby Pocket Razel -- it has too much of a curiosity factor to be considered a threat, at least that's my experience, but all the strength of a framelock.  Another decent alternative is the Swiss Army Knife (SAK), as long as the blade comes in under 3".

I have been playing with the thought of upgrading my non-threatening back-up knife to a Case or something similar, though I still really dislike the way they fall flat at the bottom of the pocket and scream "I have a knife" as it sticks out against the thigh while walking.  I really need to find more pocket knife holster alternatives!

When I am not testing out a product for an article, I carry my Case single blade trapper with liner lock and pocket clip.  I have two.  Sometimes I also carry a Moore Maker of the same flavor without the pocket clip.  I carry this in a sheath.

Never anymore without at least one trad, usually two, one larger and one smaller to not scare the "sheep".  Usually what most would consider too many, but I like them.  I like different knives for different tasks.  They also make good "worry stones" to just stick your hand in your pocket and rub.  Not too much into moderns.  Do have Twitch II's and Trapper locks whose thumb studs and or clip makes most to consider them "moderns".  Had a buddy who mentioned some time back that he was surprised I didn't carry a "multitool".  Since, I have added 5 different ones to my collection, but still don't carry one regularly on my person.  There is one in the car and others close by different locations.  I am adding a Leatherman Micra to my keys though for the scissors.

FeaturedPermalink Reply by Charles Sample on September 8, 2015 at 23:21

Until a few months ago my EDC was a Case Mini Blackhorn lockback and a Leatherman Micra.  But then I decided to do a daily use test of a Rough Rider RR718 work knife.

The reason for and the results of the test can be seen here.

To sum up the test in a few words, the RR replaced the Case as my EDC.

In MemoriamPermalink Reply by Doug Webber on September 9, 2015 at 2:27

I grew up on a farm, so having a traditional folding pocket knife was second nature. I would bet that at least 90% of the boys in high school carried a pocket knife. When I was in the Navy, and afterwards as an electrician, I usually had a Gerber lock back with a half serrated blade and a pocket clip. When I retired, I went back to the traditional folder. I have several EDC's. At first it seemed silly to have more than one pocket knife, but after my collection passed 100, it seemed kind of silly not to have more than one. 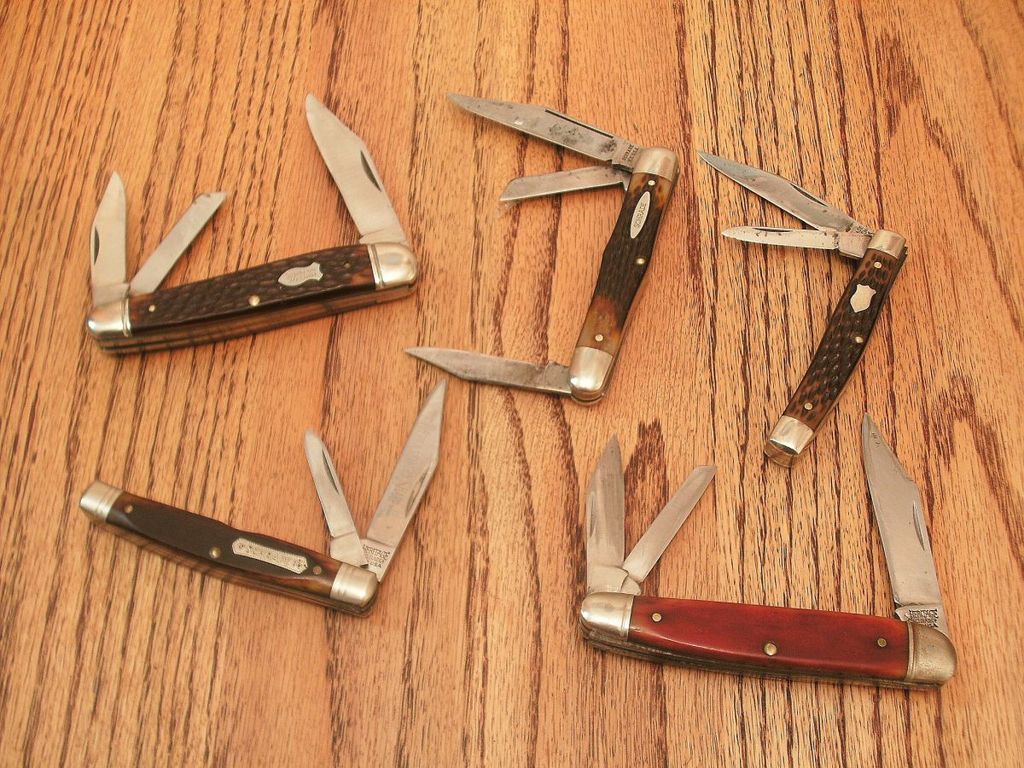 I hear you Doug. Since I was 8 years old I have carried a knife....here...there and everywhere.  Remember, cut deep, long and continuous.

Seems a good many of us carry a traditional even if we are carrying something more modern to go with it.  I have been carrying a whittler for the past few months but that is not unusual, it is a pattern of choice for me.  The funny thing is I rarely use my carry knife, it is usually in my purse.  More often than not I can be heard saying...Honey can I use your knife?

Yep, Traditional all the way for me.

Like David, I too carried one or more pocket knives all the way from grade school to this day. I gave a speech on how to clean a 1897 Winchester Shotgun in College. No one blinked an eye about me having this shotgun on the campus. After I graduated from Jr. College, I was employed as a LEO so I carried a firearm and knife (sometimes an auto knife) everyday for the last 46 years. The only violence at school or College was two dudes squaring off out of site of the ladies with other dudes to pick them up after the disagreement was settled.

Now we have different times with different influences on our youth. I truly think evil has worked its way into our way of life...starting at the top. We must do our best to battle this evil on election day, school board meetings as well as confronting it wherever it rears its head.