I awoke to find my cold much better and I could actually taste my breakfast of pancakes and sausage.  The wind had finally died down though the sky was still overcast and the morning was chilly. After breakfast I met my guide for the day and we discussed where we were to fish.  When asked what I would like to do I said without hesitation, "Missouri River."

Ryan is a young man in his early 30's, very educated and very confident.  Some might say that his confidence level borders on arrogance.He is a good friend to my guide of the first day out (Tracy) and Tracy highly recommended him to me.  Ryan had good things to say about Tracy and said he was the second best guide at the lodge next to himself.  I had to smile remembering the day that Tracy and I had enjoyed on my first day out.  We did decide to go back to the Missouri but to fish some 4 miles above where we had put in on day 1.

I had fished alone with my guides the first 3 days but Day 4 was made special because my Tennessee friend and fishing guide was able to share the drift boat with me.  Ian is a young man from Townsend, Tennessee.  With his wife, Charity they own and operate R&R Fly Fishing.  Ian has written several books on fishing in the Great Smoky Mountains.  He and Charity have guided me on several trips to fish both the National Park and the famed Hazel Creek over in North Carolina.  He is an outstanding fly fisher and all of his casts are as effortless as picking up a fork at dinner is to me.  Besides all of that he is a history buff and just an all round great guy to spend some time with.

Right after we hit the water one of the most humorous moments of the entire trip came when Ryan began to give us the basic instructions for how we were going to fish including how to cast, how to mend, and how to properly tie on the dropper flies.  Now I can always benefit with coaching; Ian on the other hand makes his living as a professional fly fisher and guide.  It was all I could do to not laugh out loud as Ryan tried to point out these things to Ian.  Ian, being the consummate professional and gentleman listened patiently and gave me a wink.  It turns out Ryan was very in tuned with that stretch of the river.  I don't think I will ever again be afforded an opportunity to share a boat with two fly fishers of that statue again.  What I learned and observed that day was worth the cost of the trip and it continues to pay huge dividends even now.

The fishing was very good.  Interestingly enough most of the trout in this stretch were Browns.  Ian did land two great fish on dries, a rainbow of about 24 inches and a Brown of 22.  I caught some rainbows in the 17 to 19 inch range and I landed my biggest Brown of the trip at just a hair under 20 inches.  It was close enough to my goal of a 20 inch Brown that I counted it as my Goal Brown. 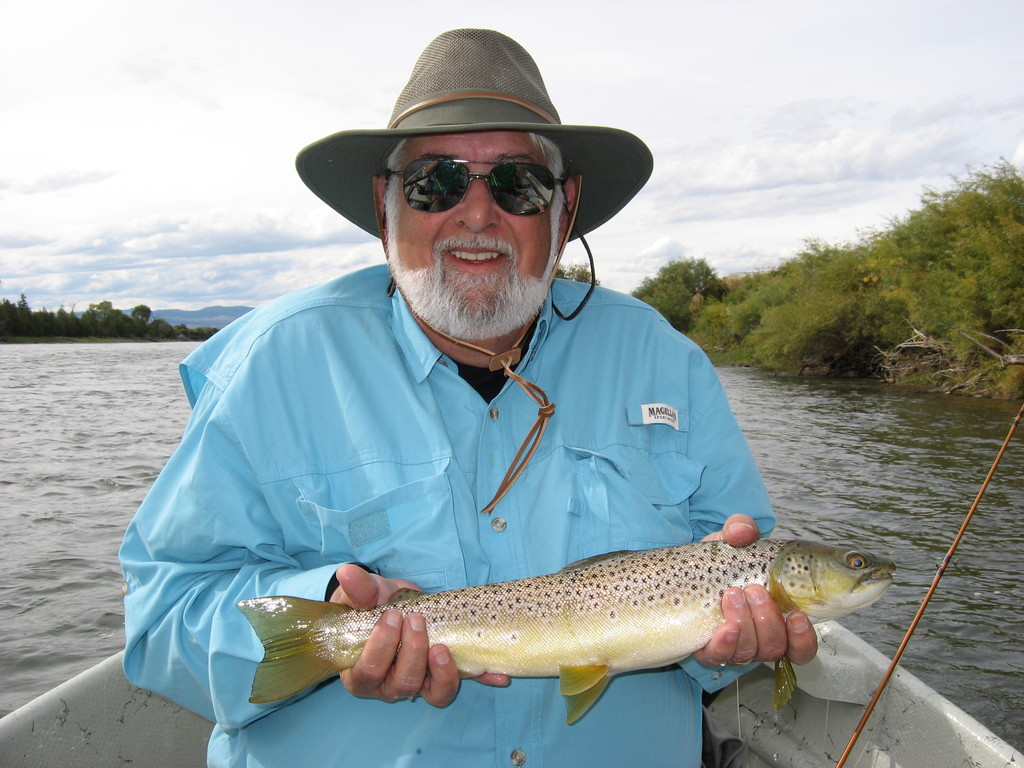 So as day 4 came to an end and all of my trip goals satisfied I was a happy man.  Dinner was outstanding and I could taste and enjoy the Scotch that was poured that night.  Another special day and I slept the sleep of a blessed man.

This is a trip dreams and bucket list's are made of!