Nessmuk Trilogy... How many of you guys follow his teachings?

I was wondering what cutlery do you guys bring in the woods. Do any of ya'll follow George Sears's ideas of what cutlery to bring in the woods? I must admit I do sometimes, but I usually adjust it to my surroundings or situation. I'm from South Louisiana and I would love to hear and see what some of you guys use in other parts of the country. Please add a picture if you can. 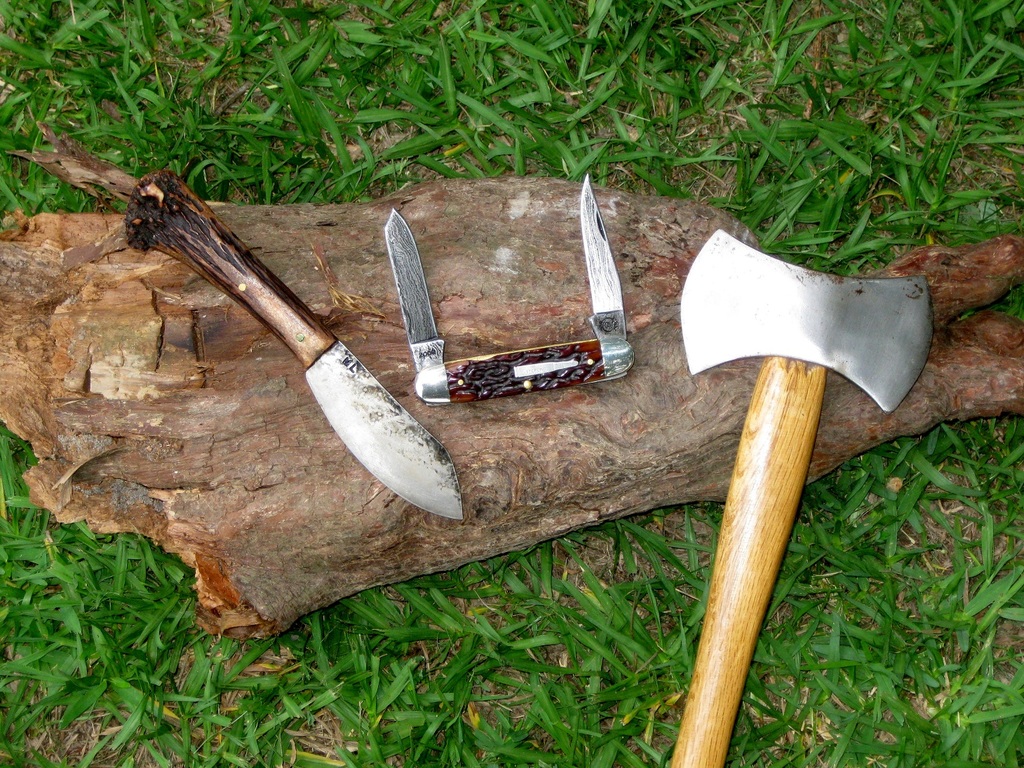 For me it really just depends on my mood. Somedays I'll be loaded to the gills with all kind of traditional folders, and usually a big locker, then on other days I like to keep it simple with a Medium sized folder and a Small fixed blade, like a Buck 102. I trust myself not to go too far from my comfort zone, and I have an okay sense of direction, so I really feel no need to have a huge blade on me.

The Buck 110 is just about perfect for my hiking, hunting needs, but I get bored sometimes. I'll be using a GEC #72 this trip, so I'll get an even better feel for it. 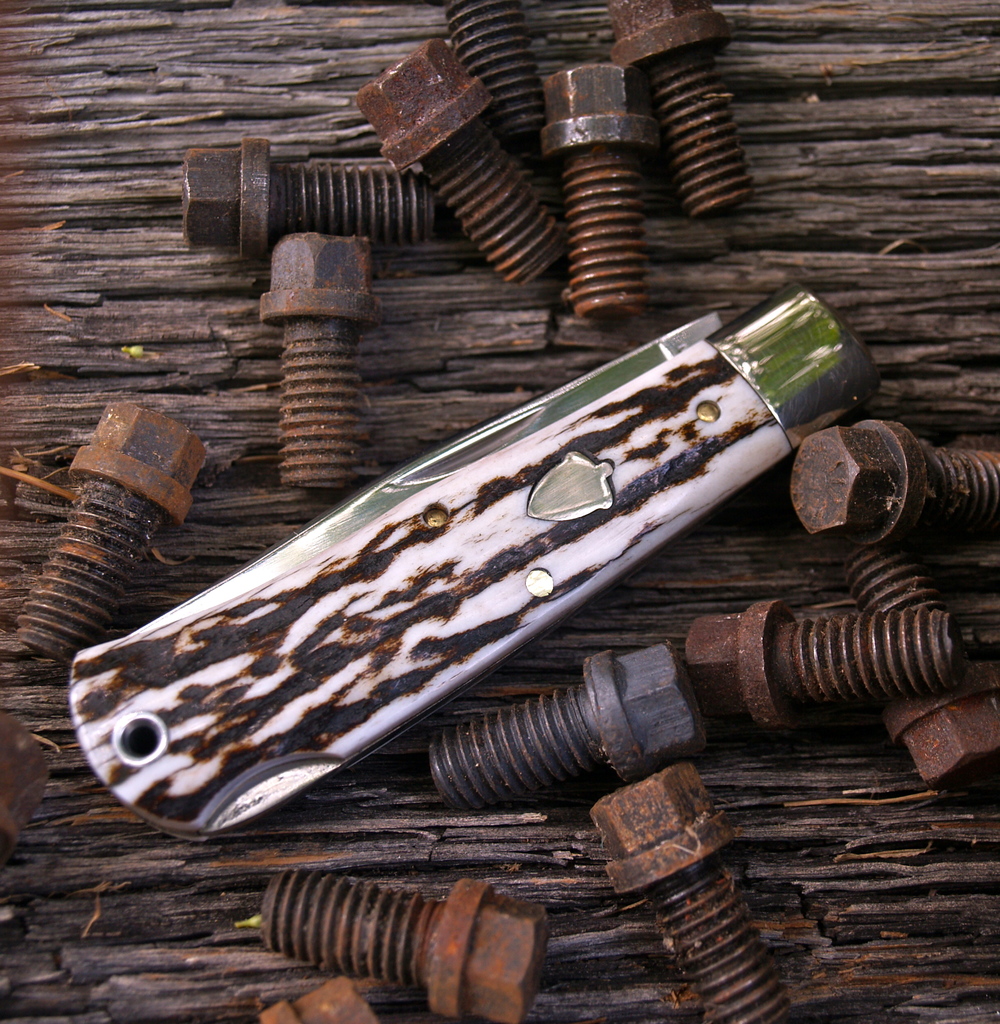 In MemoriamPermalink Reply by Robert Burris on July 6, 2011 at 19:13
Yea Johnny, when it's hot you might want to travel light.

In MemoriamPermalink Reply by Robert Burris on July 13, 2011 at 16:49
I think a change of activity, a change clothes, a change of temperture ever a change of mind you might need to change knives. There is no one knife that is good for every situation so we must always be ready to make a change of cutlery. The old timers seemed to have believed in one small, one medium and one large for their cutlery needs on camping trips. I think we need to discuss all the possiblities of this theory, lets hear what y'all think.

I actually had to look him up.  I had no idea so I went to the wikipedia.  So now I want to read his stories and cant wait to find some material by him

In MemoriamPermalink Reply by Robert Burris on July 19, 2011 at 19:16
Woodcraft and Camping, by George W. Sears, great reading. Sorry I thought everyone that was into knives knew about the Nessmuk knife. Also a spear point knife by Kepart and a clip point by E. H. Kreps. These were some of the outdoor writers from the late 1800's and early 1900's.

Permalink Reply by Shlomo ben Maved on July 19, 2011 at 19:50
I carry at all times in the bush, whether I'm guiding clients or hunting/fishing on our own a variation on the original theme--I have a Grohmann #1 instead of a Nessmuk and a two blade Trapper, a single bit Cruiser axe but where I differ is I take a folding pruning saw and a machete/kukhri along...I also have a 4" folder sheathed on the belt next to a multi-tool...In my left front pocket resides a very old Boker Deluxe Scout knife and has been there for at least forty years--I'm naked without it.

The axe and machete are attached to the outer frame of the pack and the saw inside along with a couple of fillet knives...Since I have multiple knive combos, I switch them off for just the heck of it or very purpose designed i.e. with a caper and skinner inside the pack.

The trio was meant to represent the ideal of necessary and available equipment of the late 19th to early 20th century...New materials, knowledge of other cultures and regions and unfortunately government laws have changed all that.

The big thing about his way of thinking which became very prominent amongst custom knife makers, like Bill Loveless, was that about a 4" blade is about all you would ever need (say 85% of the time) out in the woods.

Sounds like you have a GREAT job.  Maybe you could share a story in our outdoor forum as well.  I would love to see a picture of the Old Boker you love so well!!

Gosh Shlomo, I didn't realize anyone still had a copy of "Woodcraft" (4th edition) by E.H. Kreps? I bought mine back in '62-or 3 along with a copy of "the Trappers Handbook. My copy of Woodcraft was published by the magazine, "Fur-Fish-Game". It is a brown paper back with a copyright date of 1923. Elmer Kreps was born in Union County in 1880 and most of his information is still practical for today's use. I also have a copy of John "Lofty" Wiseman's SAS Survival Handbook (2003) which is no longer available except that a person can still find a used copy on eBay.

Being in N. Florida I like to keep an Ontario 18" machete in my boat for an emergency. Up in the far north, I would prefer a good axe or hatchet though. Presently considering a Gransfors Bruks Wildlife Hatchet or their Small Scandinavian Axe?

As far as knives go, I really like my Buck Special 119 but also find a smaller knife like my Buck Woodsman 102 to be useful more often. My standard pocketknife is a Buck Stockman which I always carry. A Leatherman Tool is also a very handy companion especially when I go fishing.
Shlomo ben Maved said:

In MemoriamPermalink Reply by Robert Burris on July 20, 2011 at 20:22
I think all outdoor buffs that like hunting, fishing or camping a little or alot in the old traditional style. They need to read some of the books of the old time writers. Shlomo, please don't skip Nessmuk. I know there is survival programs on TV right now and that is great. It's getting people back into traditional style of outdoor adventure, a little. Nessmuk, will show you, that with the right cutlery it's not that hard to make it in the outdoors. Please y'all check it out!

Permalink Reply by Shlomo ben Maved on July 21, 2011 at 0:31
Skip Nessmuk How?
I've had and read his book along with a small book of most of his magazine columns.
FYI "Nessmuk, Woodcraft and Camping by George W. Sears is available from Amazon in paperback format for $9.25 at this link:
http://www.amazon.ca/Woodcraft-Camping-George-Sears-Nessmuk/dp/0486...

If you read any of the other "Camping" gurus, Kephart, Kreps, Bean of the same time period and later writers Ormond, Riviere and my all time favourite camping writer John Jobson; they all say the same things with minor variations...The older writers due to any variety in their equipment choices and the newer ones because they favour a different (more modern) knife or tent, the messages, the experiences, the techniques, Hell, even the writing style are very similar.

I don't have an actual Nessie knife (copies &/or variations of, yes) but I do use the Grohmann line of Bush Knives that were designed by D.H. Russell which were in part derived from the Nessmuk pattern--a lot closer to the original then any other "Bushcraft" knife...Knifemaker's link:

I can't publish pictures but if you check on my profile I have some knife pictures in an album.

I don't embrace the man's personal brand choices but the three tool concept I've always used as that's what my great uncles all used and I learned from them...Most of them only carried a Stockman or Trapper or Muskrat folder and that was all that was needed to field dress a deer, a rabbit, a grouse or make fuzz sticks to start a fire but there was a larger fixed blade (boning) knife and an axe to split the rib cage or pelvic bone or chop up firewood.

Not many of us use canvas covered cedar strip canoes or canvas wall tents for our camping transportation and housing needs...We'll use synthetic down for clothing and sleeping bags, propane stoves and lanterns instead of the Naphtha/White gas versions, nylon and variants for our clothing, tents backpacks instead of waxed cotton and canvas.

Besides the nostalgia trip you realize that starting a fire and cooking a meal, camping in a tent, paddling a canoe the techniques hasn't changed a lot since the 1870s; reading a map, catching a fish, setting a snare although with different materials still remains the same just aided by GPS and Fish locators and factory pre-assembled snares sets.

Read them for what had been and how it was done and apply it to modern times and equipment/tools.

In MemoriamPermalink Reply by Robert Burris on July 21, 2011 at 9:25
Shlomo, that's great! good to hear from you. I wish you could post some pictures of your area, I love that country. I use to own a Grohmann knife, I like the design and it was very well made for it's price. I gave it to a friend that is still using it today. You seem to be a well read outdoorsman. I have been asked to help get this group going again and I would appreciate any help you can give. Maybe pick one of the old camping gurus and tell everyone about some of their teachings. I would like to know more about Jobson, myself. Thanks

anders sundby braathen is now a member of iKnife Collector
13 hours ago
Welcome Them!