Standards for a Sharper Review

What things must we consider when testing a knife? Standards may vary by blade type. This is the place to discuss what we want to use. Seek to agree wherever possible. Its ok to have differences or to challenge but our purpose should be to produce a Sharper Review.

Our goal is to be a source for reliable, trustworthy reviews that are thought out and fair in all respects.

Let me outline my view:

A review should be somewhat comparable. This means that each review should have certain standard points that are discussed. This could be different for different types of blades.

For me the question would then be:

'What points should a review touch on?"

Permalink Reply by Steve Hanner on July 20, 2011 at 9:40
I will start out saying I approach knives expecting that it will function, because I use a knife everyday, so that being said I would postion myself as 90% function, 10 % form. My question is how do you test for function?

I'm writing up a format and will post it up some time later today or tomorrow.

I will have a format for both EDC and Outdoor.

Let me note that before we go ahead and make the review article public, it should go through a good amount of peer reviews/editing.  Just standard procedure.

Constructive criticism is encouraged.  For the authors, it is a good idea to be open to change and not be taken aback by peer reviewers' opinions.

Permalink Reply by Steve Hanner on July 20, 2011 at 11:37
Excellent Tom, I look forward to the format, that should give us some structure to use. I'm fine with a peer review to make sure it all makes sense. Another set of eyes is always good prior to official release. You know the other thing I considered is if something in a review, a small part not the whole thing, needs to see the bright light of day before the rest of the review is published that would be good too for posting, and scrutiny.

So I made two formats: one for EDC knives and one for outdoor knives.  Of course knives can cross into both realms.

They are not complete and I would like anyone to modify or add to this format until we all have unanimously decided upon a final format.

As for peer reviews, the reviewer should send a copy to us by email and we can discuss problems in the email (or just say that the review is kick-ass)

We could also consider just attaching the reviews to post here.  Just make sure it is saved in a PDF so no one can steal/ modify it.

Also, I didn't mention this in the format.

If you are using pictures, make sure pictures match description.  If you're talking about the handles, focus the picture on the handles.

I would like to have captions and figure # for each picture, that way you can make references in the article.  However, that might be unnecessary if you can write with good flow and include pictures where necessary.  Also don't put pictures when they are not needed.  Pictures really should only go in the results section.  You could put a picture in the abstract, too, just to give the person an idea of what the knife looks like (kinda like kniferating.com).

Pictures are good, but if you want to make them useful and meaningful you will need to relate them specifically to the places in the article.

I also didn't include a rating system, because that just makes the article that much more opinionated and we are trying to make reviews as objective as possible.

Permalink Reply by Alexander Noot on July 20, 2011 at 14:13
Very interesting Tom. However I'd like to point out that there's a difference between knife "testing" and knife "reviewing". And from what I can tell the format you've set up is for testing.

Someone asjed earlier how you measure something like "function" (steve). You do so by defining all the parts that make up the sum. In other words: what functions do you expect. Tom's format is quite well suited for this. But it's more towards testing than reviewing. Testing gives measurable facts, things that are repeatable. Reviewing is a presentation of someone's view or his/hers opinion. The only fact that counts there is that they like something or don't.

........This is where all capitals cannot express the level frustration that I am experiencing at this moment.

First off, let me ask you these two questions.  How on earth will you be able to review a knife without first actually testing/using it?  Also if you don't have proof, why, should I, the reader, for a split second even consider believing you or evening listening to you?

I honestly don't know how anyone can simply and so quickly overlook that aspect.  Are they that stupid?

If we're to do a review under your interpretation, then we aren't doing anything at all. Opinions are just opinions.  One person's opinions will differ from the next.  What's the point?  Every single review that I have read is all opinion and no fact.  It is complete BS.  There is absolutely no back bone to their statement (well unless they reference to some test a person did, but the majority, actually 99.99999999% don't make any reference of any kind)

Though, I'll humor you.  So let's say we did reviews via opinion.

Take this scenario for instance.  I myself hate clip points.  I can't stand them.  Every review that I do on a clip point knife will get a bad rep.  I say it's weak (but have no proof).  I say it looks ugly (Okay, that's my opinion).  Thus every person who reads my reviews will inherently just hate clip points.  But more importantly, they will think that clip points are weak from what have said.

Anyone who reads my review will be influenced to never buy clip points.  When in many cases they can miss out on a great product.  In fact, clip points are quite good.  My RMD's clip point is rather strong.  My friends SOG Seal Pup's tip is also rather strong.  What have we done to show that?  Tip prying wood, prying open paint cans, etc.  Clip points might just look aesthetically unappealing but functionally they can still be worthwhile.

If did reviews based on opinions, which countless "reviewers" do already, we are doing nothing  more.

I can't count how many times where some person "reviews" a "tough" folding knife and calls it a "beast."  They don't even test the knife, how on earth do they know.  What have they done with the knife to show that it is a tough knife.  The answer nothing at all.

Also as far as measuring function, like you said, you define all parts that make up the sum.  Thus you are defining function.  You don't measure it.  A gun shoots bullets.  That is the function of a gun (well, you can use it as a hammer, too, I suppose).  However, you can measure the various forces the gun goes through when it fires a bullet.  You can also measure the velocity of a bullet.  However, we are then looking at the function of a bullet, stopping power? Armor piercing? etc.

To be quite frank, I stopped doing reviews simply because the majority of people are more willing to look at and believe opinions than actual data.  It's quite sheep like.

(I really do have to apologize.  I don't mean to offend anyone, however, upon writing this, I became more than slightly angered... come to think of it, "angered" is much to strong of a term)

Okay, now that I've cooled off a little, I can think.

Let me consider a parallel:  food.

It is hard (well not really) to measure food.  You might be able to measure salt or sugar content.  However, everyone will have a different opinion.  Thus, those measurements don't really translate into useful information which one can interpret. You also can't just judge food by how it looks.

However, you still can't review a food dish without actually eating the food. 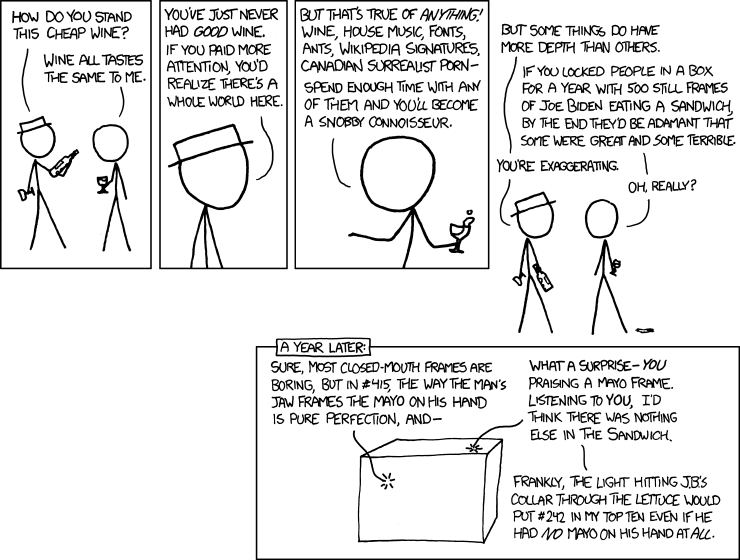 This is where opinions leads us to.  Let's try not to go there.

Permalink Reply by Steve Hanner on July 20, 2011 at 20:33
Well let me ask a question. When someone, anyone reviews a knife don't they go through something? In other words I know they don't simply look at a knife in box and write an article. there has to be a process, however formal or informal to accomplish the work. Could we  agree on that principal?