If seems like months since I've posted anything it is probably because it has been months since i posted anything.  One reason is because i just have purchased a knife recently that I felt was worth talking about.  I guess that happens now and then when you have over 500 knives.

That all changed over the week-end when I finally decided it was time to buy one of the knives on my bucket list.  And man am I so happy I did.  I finally got around to picking up a Army Air force Folding Machete!  And this is no replica, this one is the real deal:

In 1942, the Army Air Force adopted a Folding Machete for use in the B-2 and B-4 Bail out kits.  This machete was designed to replace the Model 18 Collins machete. The reason for the adoption was to reduce space in the emergency kit.   When folded, the AAF Folding Machete measures only 11 inches.

Case, Camillus, and Cattaraugus were the 3 makers of the WW2 model folding machete. (I’ve also read Kinfolks made them but until I see one by them I’m going with the “3 C’s”.)  All three are nearly identical to each other.  As such all three suffer from the same flaws.

The shape of the handle is not especially comfortable. The edges are squared off and cut into the hand over time.   The liner lock on the blade was not trusted by the users and was subject to failure.  To make matters worse, the blade guard was a separate item and was subject to being lost. However, due to the war, these minor issues would have to wait until after the war to be resolved.

The folding machetes were called “Jungle Knives” by the crews who carried them.  Despite their flaws, they did work.  In some instances, crew members would reshape the plastic grips to make them more comfortable. However, the other problems remained an issue; especially losing the blade guard.

For the most part, the AAF folding Machetes were issued to crews operating in the South Pacific.  However, I have seen accounts of them being used in European theater. I assume this was later in the war when survival kits were becoming more standardized or perhaps when certain Bomber Groups were transferred from the Pacific to Europe.

I’ve been looking for the AAF’s nomenclature for this item.   I have seen at least on instance of it being called the M1942 Folding Machete but most sources have called it the AAF Folding Machete.

From what I understand, The USN and USMC flight crews also used the Folding Machete in their bail out kits.  Again, I’ve yet to be able to verify this.

The Royal Air Force and Commonwealth forces also adopted the folding machete for the air crews.  They not only bought ones made in the US but produced them under license in Sheffield, England.  The British made folding machetes normally had a lanyard hole added to the handle.

After WWII had ended trials were conducted to address issues with folding machetes.   Problems with the poor shape of the grip and loose blade guard were the top issues.  Imperial submitted a design with an improved grip and integral folding blade guard in 1947 and this would later be adopted by the newly established U.S. Air Force as replacement.   The new Imperial Folding Machete was known as the A-1 Folding Machete.  The A-1 also rreplaced the canvas bag of the previous model with a soft leather sheath that included a sharpening stone enclosed it a small pouch on the sheath.    The A-1 was adopted in 1948 and remained in service throughout the 1950s.   During this time, the older AAF folding machetes were phased out. The liner lock on the folding machete is very stiff and extremely strong,  The blade has absolutely no movement when opened or closed.  It really seems to be as good as the day it left the factory which was at least 71 years ago!  On top of that the blade is close to razor sharp!  The blade guard is also nice and snug with no warping.  I'm totally psyched by just how well made this machete.  I've seen you tube videos of people using them and I have no doubt they are as rugged as Sherman Tank!  While i don't plan on using it I know eventually I'm going to have to just cut something to smithereens with it!

The Machetes were normally just stamped along the spine by the Maker.  This one was made by Case

One of the other knives often packed with the folding machete was the AAF folding fish knife. Essentially this was a large toothpick with a scaler back used for dressing fish and small game. 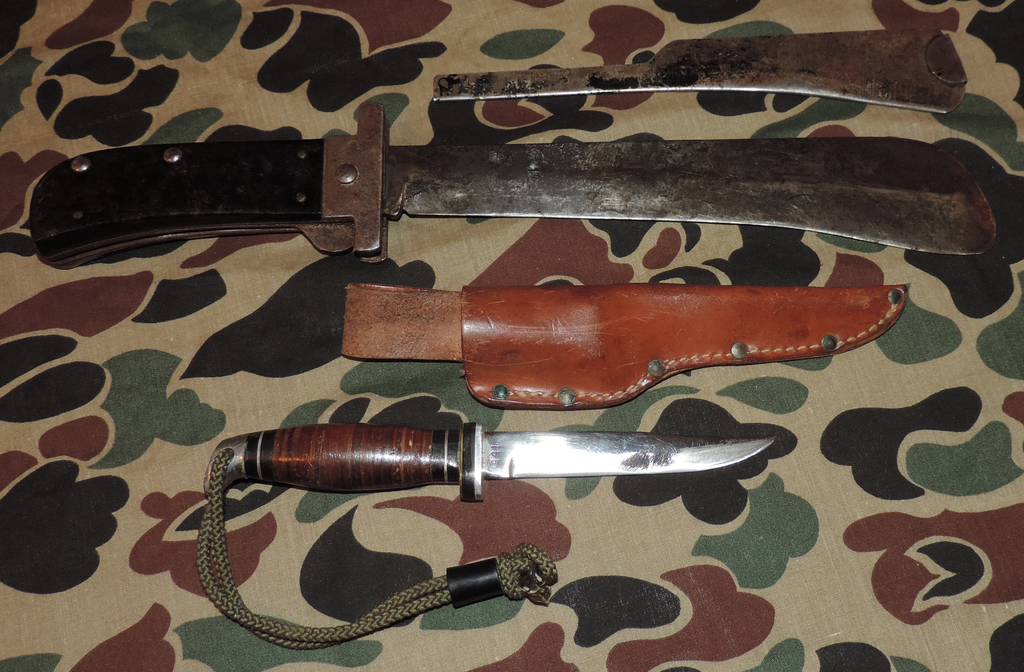 And the Folding Machete compared to my Boker E-1 USAF survival knife.   If your sensing a theme, you are correct.  I like Army Air Force and U. S. Air Force knives. I have recently come to have a far greater appreciation for machetes myself -- maybe in part due to so many otherwise incredible knives with edge grinds that are horrendous, & other knives that are just too thick to be good slicers.

So the I fell in love with this little beast -- the 12" drop point machete from Fiddleback Forge.  The timing of my new obsession was good -- turns out they were just going into another production run when I contacted Fiddleback Forge directly.  I would have preferred the green Micarta as opposed to the natural, but in time those scales are going to get dark while still providing some contrast to the blade...

I could make this one a safe queen, but WHAT? no way. Funny, no where else we have lived in the US did we need a machete.  Now we use one at least once a week

I can confirm that there were Kinfolks stamped folding machetes.  I saw 1 on fleabay around mid-2014 but I was sniped at the last minute or I'd a had one.  I didn't realize they were so rare at the time or I'd have save a pic of it for posterity.  I have never seen another on fleabay since then.

I would suspect that any Kinfolks stamped folding machetes were really made by Case, just stamped Kinfolks for some reason.

“I would suspect that any Kinfolks stamped folding machetes were really made by Case, just stamped Kinfolks for some reason.”

i think the ‘For Some Reason’ has everything to do with Government quotas.  Companies were given quotas and limits on how many to make for a variety of reasons, (to meet production demands, political favoritism, etc.).

It also make sense for a smaller company to buy the prepared blanks from a larger company than spend money on the tooling especially if they have other contracts.

In the case of the Folding machetes, I would assume  the larger company was making the blade blanks and shipping them off to the smaller companies for final assembly/finishing.   (The handles were also being made by a different third party or parties.)

Its a win/win for everyone.  Case recoups the loss of tooling by selling blanks to Kinfolks. Kinfolks gets a lucrative contract and still makes a profit in spite of paying for Case Blades. All companies meet the deadline for a government bonus, and the government gets its product according to specs and in less time and doesn’t show favoritism.

That's good reasoning and is probably closer to reality.

My supposition was based on the fact that Kinfolks was started by Case relatives and I figured the big dog threw the little pup a bone, "subcontracting" out a portion of their (Case's) contract.

I would guess that to be correct Tobias

Its a win/win for everyone.  Case recoups the loss of tooling by selling blanks to Kinfolks. Kinfolks gets a lucrative contract and still makes a profit in spite of paying for Case Blades. All companies meet the deadline for a government bonus, and the government gets its product according to specs and in less time and doesn’t show favoritism

I don't know that the Folding Machete was issued to flight crews as such. Rather I believe that it was part of the CES (Complete Equipment Schedule) for an aircraft. I believe that in the case of the B25 Mitchell bombers that were supplied to the Royal Australian Air Force that they were part of the Survival Kit which was fitted in to the back of one of the crew members seats. I have seen a photo of such but did not think to keep it at the time. Perhaps another member here might be able to assist.

Well John that gives me a item to go look for, there must be pics of that out there and it sure would be a cool thing to find

Thank for the information/ correction, John. This was really helpful!

I don't know that the Folding Machete was issued to flight crews as such. Rather I believe that it was part of the CES (Complete Equipment Schedule) for an aircraft. I believe that in the case of the B25 Mitchell bombers that were supplied to the Royal Australian Air Force that they were part of the Survival Kit which was fitted in to the back of one of the crew members seats. I have seen a photo of such but did not think to keep it at the time. Perhaps another member here might be able to assist.

I also have one of these Case folding machettes. My was given to me by a friend. He told me it was a paratroopers machete, based on what little knowledge he had of it. It is a unique looking tool and I am very happy to have one myself. I will keep following this post to see what other information may arise.

David M is now a member of iKnife Collector
yesterday
Welcome Them!

Harvey Lucas is now a member of iKnife Collector
Thursday
Welcome Them!